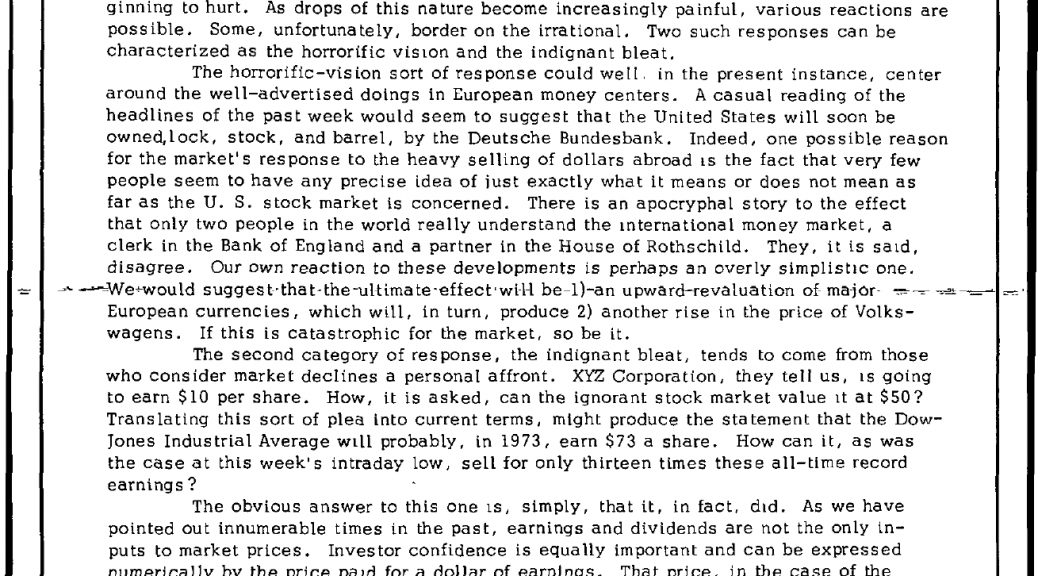 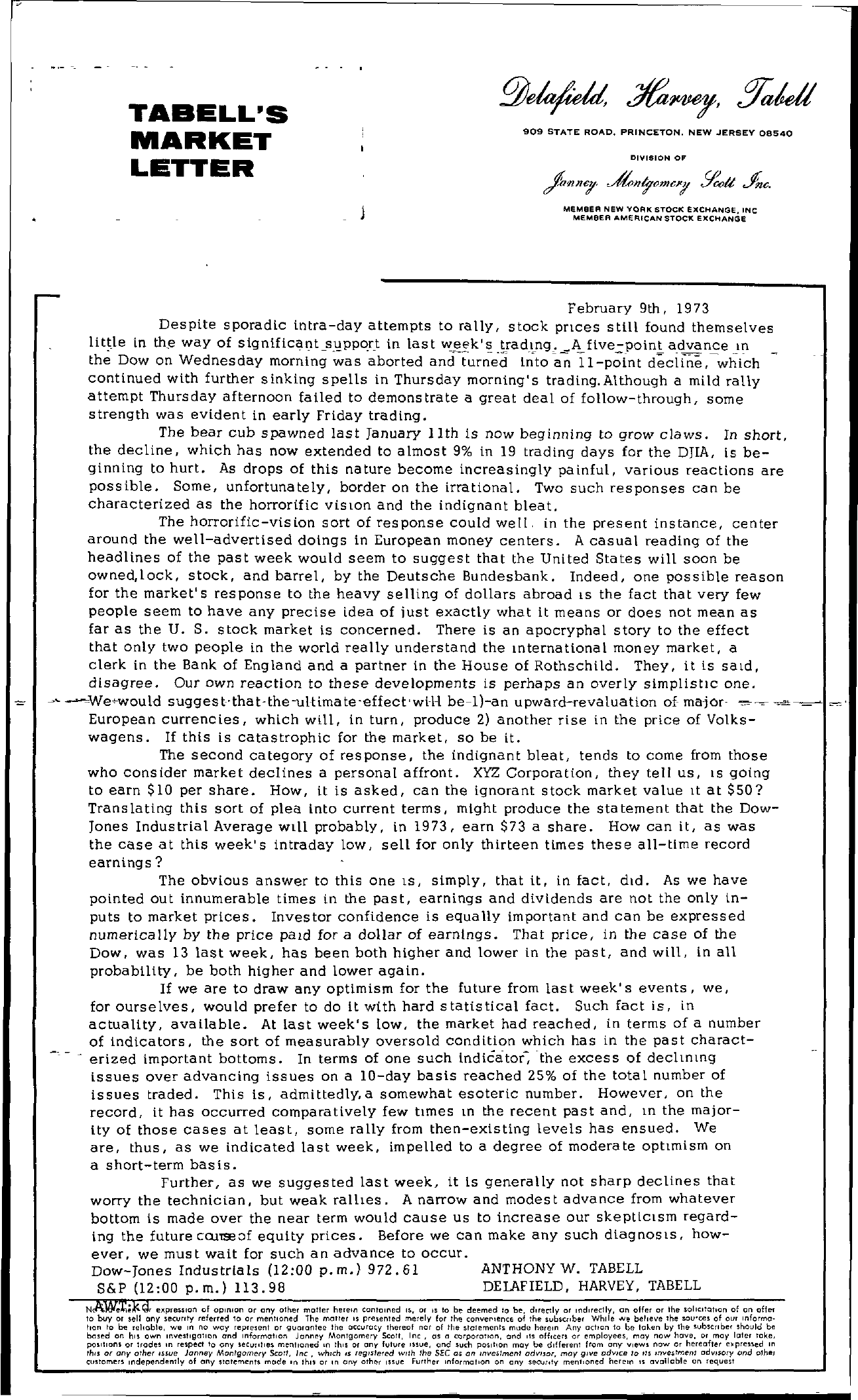 TABELL'S MARKET LETTER 909 STATE ROAD, PRINCETON, NEW JERSEY 08540 DIVISION OF MEMBER NEW YORK STOCK eXCHANGE, INC MEMBER AMERICAN STOCK eXCHANGE February 9th, 1973 Despite sporadic intra-day attempts to rally, stock pnces still found themselves little in the way of significantspport in last week's trading. A five-point advance In the Dow on Wednesday morning was aborted anci-turn-d ;;to 'a-n Tl-p';-int dcii-ne,whi-ch continued with further sinking spells in Thursday morning's trading. Although a mild rally attempt Thursday afternoon failed to demonstrate a great deal of follow-through, some strength was evident in early Friday trading. The bear cub spawned last January 11th is now beginning to grow claws. In short, the decline, which has now extended to almost 9 in 19 trading days for the DJIA, is be- ginning to hurt. As drops of this na ture become increasingly pa inful, various reactions are possible. Some, unfortunately, border on the irrational. Two such responses can be characterized as the horrorific visIOn and the indignant bleat. The horrorific-vision sort of response could well. in the present instance, center around the well-advertised dOings in European money centers. A casual reading of the headlines of the past week would seem to suggest that the United States will soon be owned,lock, stock, and barrel, by the Deutsche Bundesbank. Indeed, one possible reason for the market's response to the heavy selling of dollars abroad IS the fact that very few people seem to have any precise idea of iust exactly what it means or does not mean as far as the U. S. stock market is concerned. There is an apocryphal story to the effect that only two people in the world really understand the tnternational money market, a clerk in the Bank of England and a partner in the House of Rothschild. They, it is said, disagree. Our own reaction to these developments is perhaps an overly simplistiC one. – Wewould suggest–that-the-ul-timateeffectwi-l-l be-I)-an upward-revaluation of- ma-jor- — . European currencies, which will, in turn, produce 2) another rise in the price of Volks- wagens. If this is catastrophic for the market. so be it. The second category of response, the indignant bleat, tends to come from those who consider market declines a personal affront. XY2 Corporation, they tell us, IS going to earn 10 per share. How, it is asked, can the ignorant stock market value It at 50 Translating this sort of plea into current terms, might produce the statement that the Dow- Jones Industrial Average Will probably, in 1973, earn 73 a share. How can it, as was the case at this week's intraday low, sell for only thirteen times these all-time record earnings The obvious answer to this one IS, simply, that it, in fact, did. As we have pointed out innumerable times in the past, earnings and dividends are not the only in- puts to market prices. Investor confidence is equally important and can be expressed numerically by the price paid for a dollar of earnings. That price, in the case of the Dow, was 13 last week, has been both higher and lower in the past, and wilL in all probability, be both higher and lower again. If we are to draw any optimism for the future from last week's events, we, for ourselves, would prefer to do it with hard statistical fact. Such fact is, in actuality, available. At iast week's low, the market had reached, in terms of a number of indicators, the sort of measurably oversold condition which has in the past characterized important bottoms. In terms of one such indicator -the excess of decllntng issues over advancing issues on a 10-day basis reached 25 of the tota I number of issues traded. This is, admittedly, a somewhat esoteric number. However, on the record, it has occurred comparatively few times 10 the recent past and, 10 the major- ity of those cases at least, some rally from then-existing levels has ensued. We are, thus, as we indicated last week, impelled to a degree of moderate optimism on a short-term basis. Further, as we suggested last week, it is generally not sharp declines that worry the techniCian, but weak ralites. A narrow and modest advance from whatever bottom is made over the near term would cause us to increase our skeptiCism regard- ing the futureco.nreof equity prices. Before we can make any such diagnosIs, how- ever, we mus t wait for such an advance to occur. Dow-Jones Industrials (1200 p.m.) 972.61 ANTHONY W. TABELL S&P (1200 p. m.) 113.98 DELAFIELD, HARVEY, TABELL N e ; el;presslon of opInion or any other moIler herein contolned I, or IS to be deemed to be, dorectly or Indirectly, on offer or the sollcllallon of on offer 10 buy or sell any securrty referred 10 or mentioned The molter IS presented merely for the convellenCE of the subSCriber While NI! believe the sOU'ces of our Informo- tlon to be relloble, we In no woy represent or gUorantee the accuracy Thereof nor of the statements mude herem Any achon to be tal..en by the subSCriber should be based on hiS own investigaTion and mformatlon Janney Montgomery Scott, Inc, as a corporation, and Its officers or employees, may now have, or may later toke, positions or trades In respect to any seCurotles mentioned In thiS or any future ISSUe, and such position may be different from any Views now or hereafter e) pressed m thiS or any other ISsue Janney Montgomery Scott, Inc, wh,ch .s registered With the SEC as on Investment adVisor, may give adVICe to 115 Investment odvIory and other customers Independently of ony statements mode 'n thiS or In any other Issue Further InformatIon on any secunty mentioned herein IS available on request