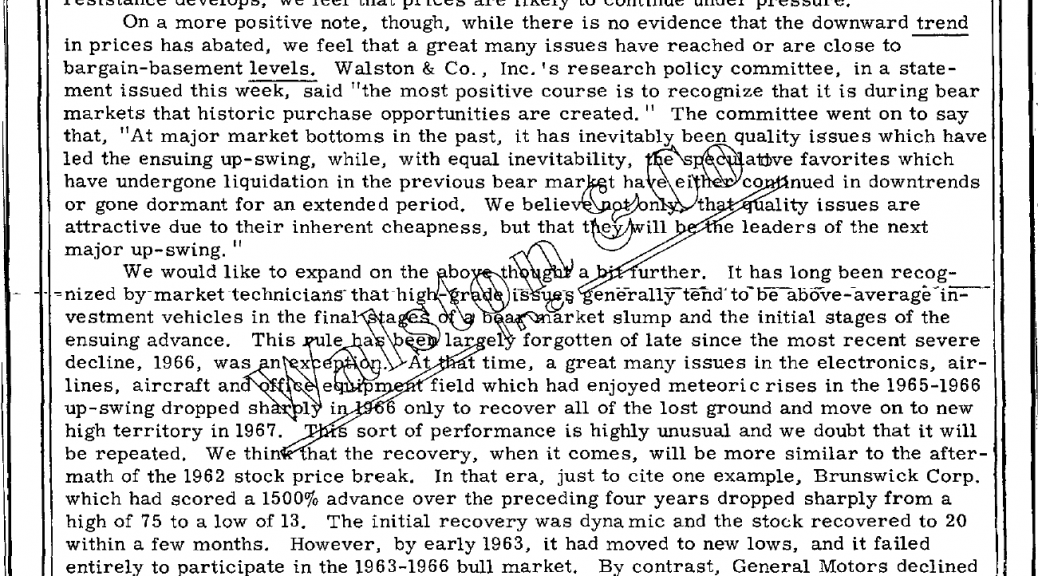 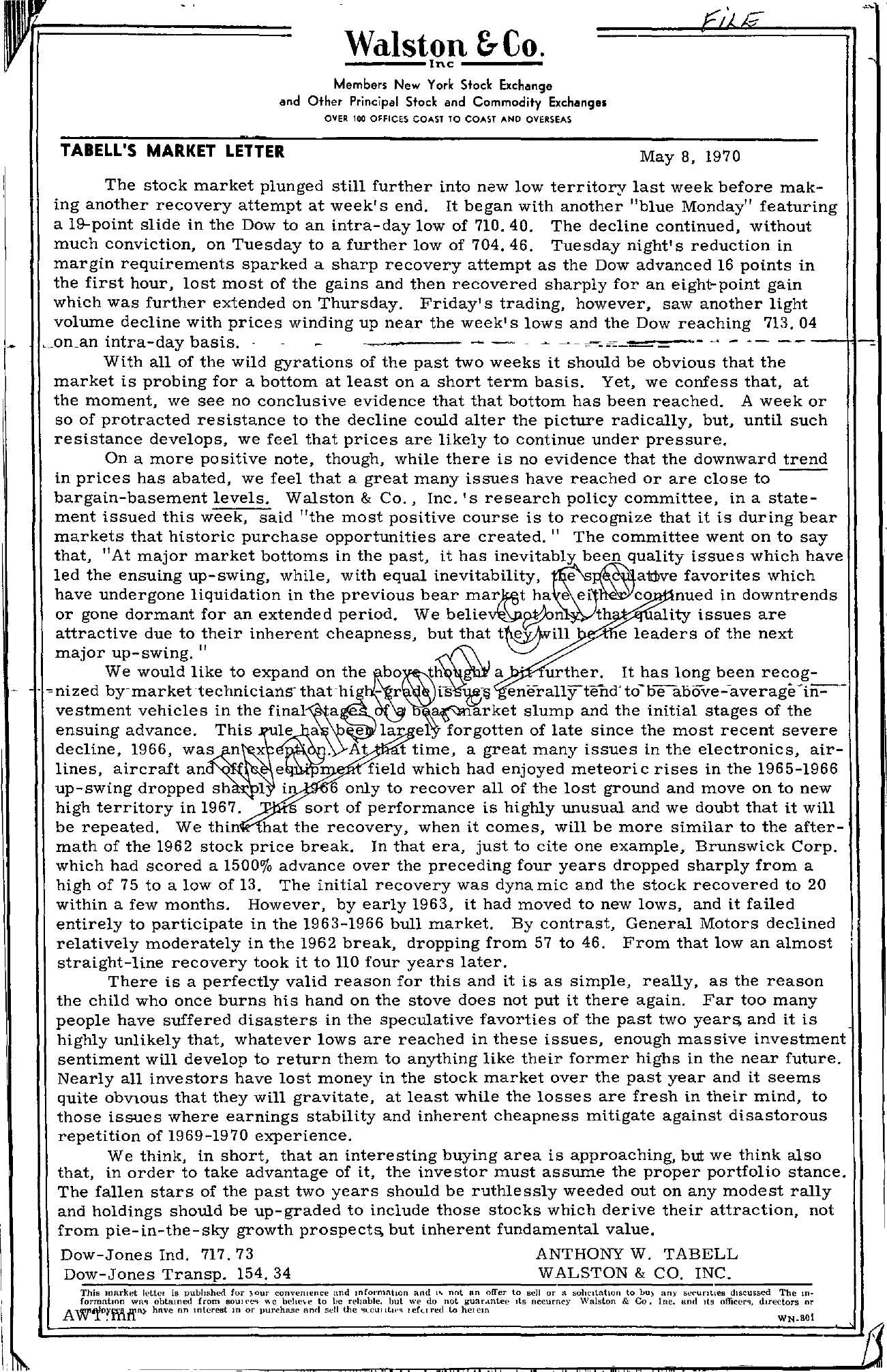 Walston &Co. Inc Members New York Stock Exchange and Other Principal Stock and Commodity Exchange. OVER 100 OFFICES COAST TO COAST ANO OVERSEAS TABELL'S MARKET LETTER May 8, 1970 The stock market plunged still further into new low territory last week before mak- ing another recovery attempt at week's end. It began with another blue Monday featuring a 19-point slide in the Dow to an intra-day low of 710.40. The decline continued, without much conviction, on Tuesday to a further low of 704.46. Tuesday night's reduction in margin requirements sparked a sharp recovery attempt as the Dow advanced 16 points in the first hour, lost most of the gains and then recovered sharply for an gain which was further extended on Thursday. Friday's trading, however, saw another light volume decline with prices winding up near the week's lows and the Dow reaching 713.04 conanintra-daybasis. – – – –0 –. – — —-Ii With all of the wild gyrations of the past two weeks it should be obvious that the market is probing for a bottom at least on a short term basis. Yet, we confess that, at the moment, we see no conclusive evidence that that bottom has been reached. A week or so of protracted resistance to the decline could alter the picture radically, but, until such resistance develops, we feel that prices are likely to continue under pressure. On a more positive note, though, while there is no evidence that the downward trend in prices has abated, we feel that a great many issues have reached or are close to bargain-basement levels. Walston & Co., Inc. 's research policy committee, in a state- ment issued this week, said the most positive course is to recognize that it is during bear markets that historic purchase opportunities are created. The committee went on to say that, At major market bottoms in the past, it has inevitably' been quality issues which have led the ensuing up-swing, while, with equal inevitability, favorites which have undergone liquidation in the previous bear ha e nued in downtrends or gone dormant for an extended period. We attractive due to their inherent cheapness, but that t!\e'Ywill 2major up-swing. IJ th ality issues are e leaders of the next We would like to expand on a' urther. It has long been recog- — – r is W5 enera11ytend'to-Jje above–average-in– vestment vehicles in the fina1m slump and the initial stages of the ensuing advance. ihiS ea e lar el;9- forgotten of late since the most recent severe decline, 1966, was n x ' . At t time, a great many issues in the electronics, air- lines, aircraft an e' field which had enjoyed meteori c rises in the 1965-1966 up-swing dropped sh 1 i 6 only to recover all of the lost ground and move on to new high territory in 1967. sort of performance is highly unusual and we doubt that it will be repeated. We thin hat the recovery, when it comes, will be more similar to the after- math of the 1962 stock price break. In that era, just to cite one example, Brunswick Corp. which had scored a 15000/0 advance over the preceding four years dropped sharply from a high of 75 to a low of 13. The initial recovery was dyna mic and the stock recovered to 20 within a few months. However, by early 1963, it had moved to new lows, and it failed entirely to participate in the 1963-1966 bull market. By contrast, General Motors declined relatively moderately in the 1962 break, dropping from 57 to 46. From that Iowan almost straight-line recovery took it to 110 four years later. There is a perfectly valid reason for this and it is as simple, really, as the reason the child who once burns his hand on the stove does not put it there again. Far too many people have suffered disasters in the speculative favorties of the past two yean; and it is highly unlikely that, whatever lows are reached in these issues, enough massive investment sentiment will develop to return them to anything like their former highs in the near future. Nearly all investors have lost money in the stock market over the past year and it seems quite ObVlOUS that they will gravitate, at least while the losses are fresh in their mind, to those issues where earnings stability and inherent cheapness mitigate against disastorous repetition of 1969-1970 experience. We think, in short, that an interesting buying area is approaching, but we think also that, in order to take advantage of it, the investor must assume the proper portfolio stance. The fallen stars of the past two years should be ruthlessly weeded out on any modest rally and holdings should be up-graded to include those stocks which derive their attraction, not from pie-in-the-sky growth prospects, but inherent fundamental value. Dow-Jones Ind. 717.73 Dow-Jones Transp. 154.34 ANTHONY W. TABELL WALSTON & CO. INC. This rnltrket lettel is published for conventence and \nfOrmntiOn and L, not fin offer to sell or n soliCitation to hu) any SL'(UntLcs discussed The In- , formntlon WIl'l obtamed from SOUI!'e Vol' beILcH' to be rehable, but we do not gUltT.mlee Its AccurAC \\'Rlston & Co. Inc. and Its officer'!, directors or I have an Interest lD or purchlUlc and sell the lefured to helem WN.SOt I ,I 1 .. ,,1,