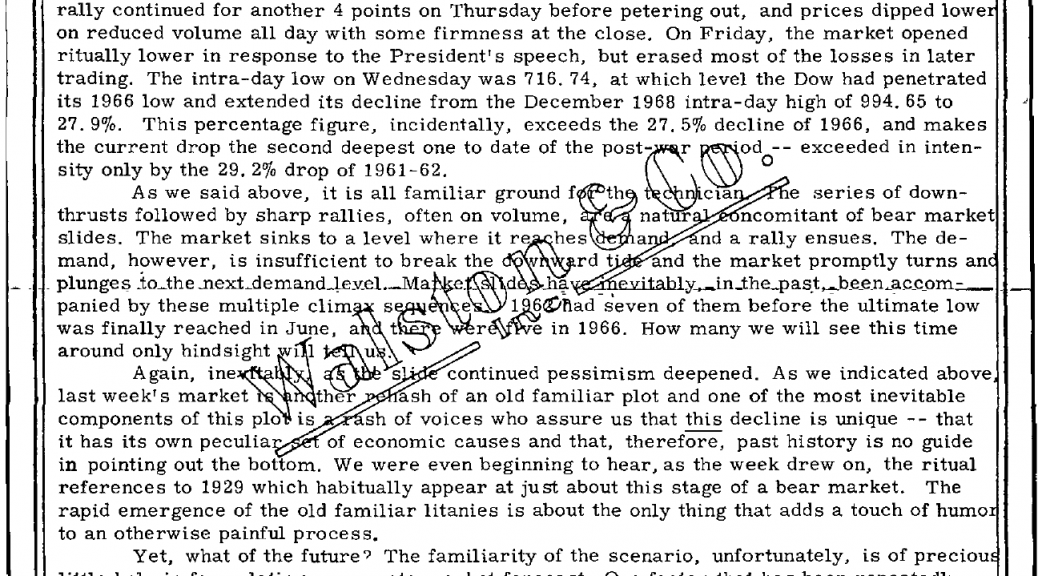 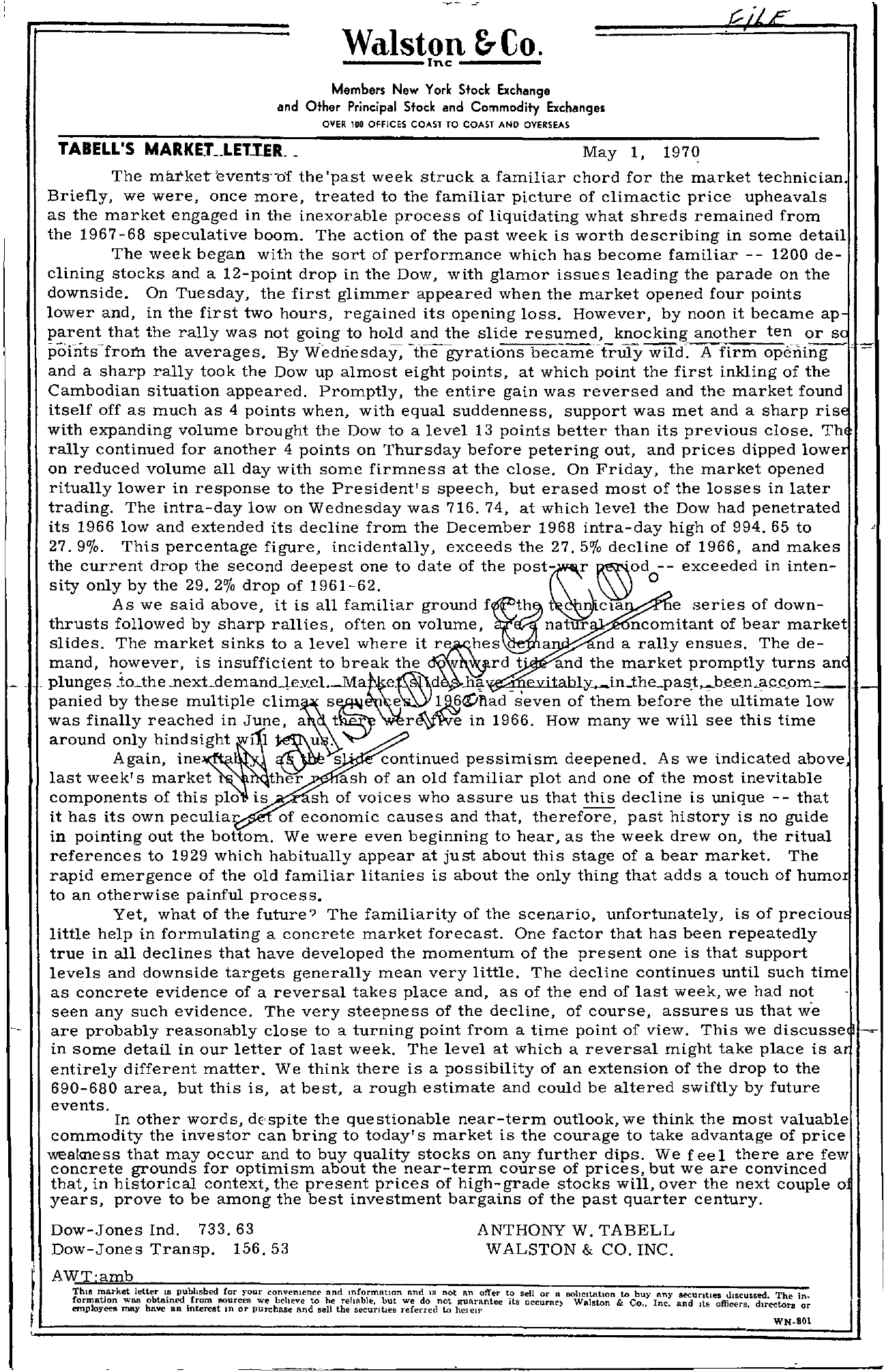 Walston &Co. —–Inc —– Members New York Stock Exchange and Other Principal Stock and Commodity Exchanges OVER 100 OffICES COAST TO COAST AND OVERSEAS TABEll'S MARKETlEUER. May 1, 1970 The market 'events–df the 'past week struck a familiar chord for the market technician Briefly, we were, once more, treated to the familiar picture of climactic price upheavals as the market engaged in the inexorable process of liquidating what shreds remained from the 1967-68 speculative boom. The action of the past week is worth describing in some detail The week began with the sort of performance which has become familiar — 1200 de- clining stocks and a 12-point drop in the Dow, with glamor issues leading the parade on the downside. On Tuesday, the first glimmer appeared when the market opened four points lower and, in the first two hours, regained its opening loss. However, by noon it became ap parent that the rally was not going to hold and the slide resumed, knocking another ten or s points-from the averages. By Wednesday, -the gyrations became-truly-wild. A firm ope-lling , and a sharp rally took the Dow up almost eight points, at which point the first inkling of the Cambodian situation appeared. Promptly, the entire gain was reversed and the market found itself off as much as 4 points when, with equal suddenness, support was met and a sharp ris with expanding volume brought the Dow to a level 13 points better than its previous close. Th rally continued for another 4 pOints on Thursday before petering out, and prices dipped lowe on reduced volume all day with some firmness at the close. On Friday, the market opened ritually lower in response to the President's speech, but erased most of the losses in later trading. The intra-day low on Wednesday was 716.74, at which level the Dow had penetrated its 1966 low and extended its decline from the December 1968 intra-day high of 994.65 to 27.90/0. This percentage figure, incidentally, exceeds the 27.5 decline of 1966, and makes the current drop the second deepest one to date of the sity only by the 29.2 drop of 1961-62. — exceeded in inten- \0' 0 As we said above, it is all familiar ground feh 'Cia e series of down- thrusts followed by sharp rallies, often on volume, natur ncomitant of bear market slides. The market sinks to a level where i t f i hees a nd a rally ensues. The de- mand, however, is insufficient to break the rd t and the market promptly turns an plunge s . panied by these multiple was finally reached in June, a t seven of them before the ultimate low in 1966. How many we will see this time around only Again, ine 11 . s continued pessimism deepened. As we indicated above last week's market ther ash of an old familiar plot and one of the most inevitable components of this plo is sh of voices who assure us that this decline is unique — that it has its own peculia of economic causes and that, therefore, past history is no guide in pointing out the bottom. We were even beginning to hear, as the week drew on, the ritual references to 1929 which habitually appear at just about this stage of a bear market. The rapid emergence of the old familiar litanies is about the only thing that adds a touch of humo to an otherwise painful process. Yet, what of the future The familiarity of the scenario, unfortunately, is of preciou little help in formulating a concrete market forecast. One factor that has been repeatedly true in all declines that have developed the momentum of the present one is that support levels and downside targets generally mean very little. The decline continues until such time as concrete evidence of a reversal takes place and, as of the end of last week, we had not seen any such evidence. The very steepness of the decline, of course, assures us that w'e are probably reasonably close to a turning point from a time point of view. This we discusse in some detail in our letter of last week. The level at which a reversal might take place is a entirely different matter. We think there is a possibility of an extension of the drop to the 690-680 area, but this is, at best, a rough estimate and could be altered swiftly by future events. In other words, despite the questionable near-term outlook, we think the most valuable commodity the investor can bring to today's market is the courage to take advantage of price weakness that may occur and to buy quality stocks on any further dips. We fee I there are few concrete grounds for optimism about the near-term course of prices, but we are convinced that, in historical context, the present prices of high-grade stocks will, over the next couple 0 years, prove to be among the best investment bargains of the past quarter century. Dow-Jones Ind. 733. 63 Dow-Jones Transp. 156.53 ANTHONY W. TABELL WALSTON & CO. INC. AWT'ambI Thill market letter l.s published for your convemence and Information and IS not an offer sell or n solicitatIOn to buy any secuntles The In. formation was obtained. from sources we heheve to be rehable, but we do not gUarantee Its occuml') Walston & Co Inc. and Its officers, director ,I emDloyees may have an mterest III or purchnse Rnd sell the secuTlues referred to helen' 8 or WNBOl