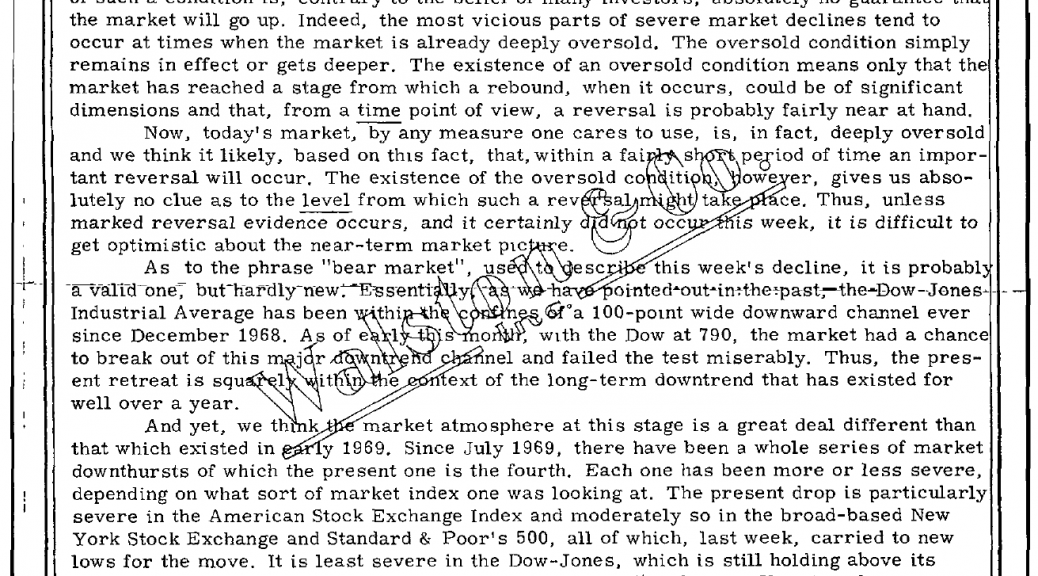 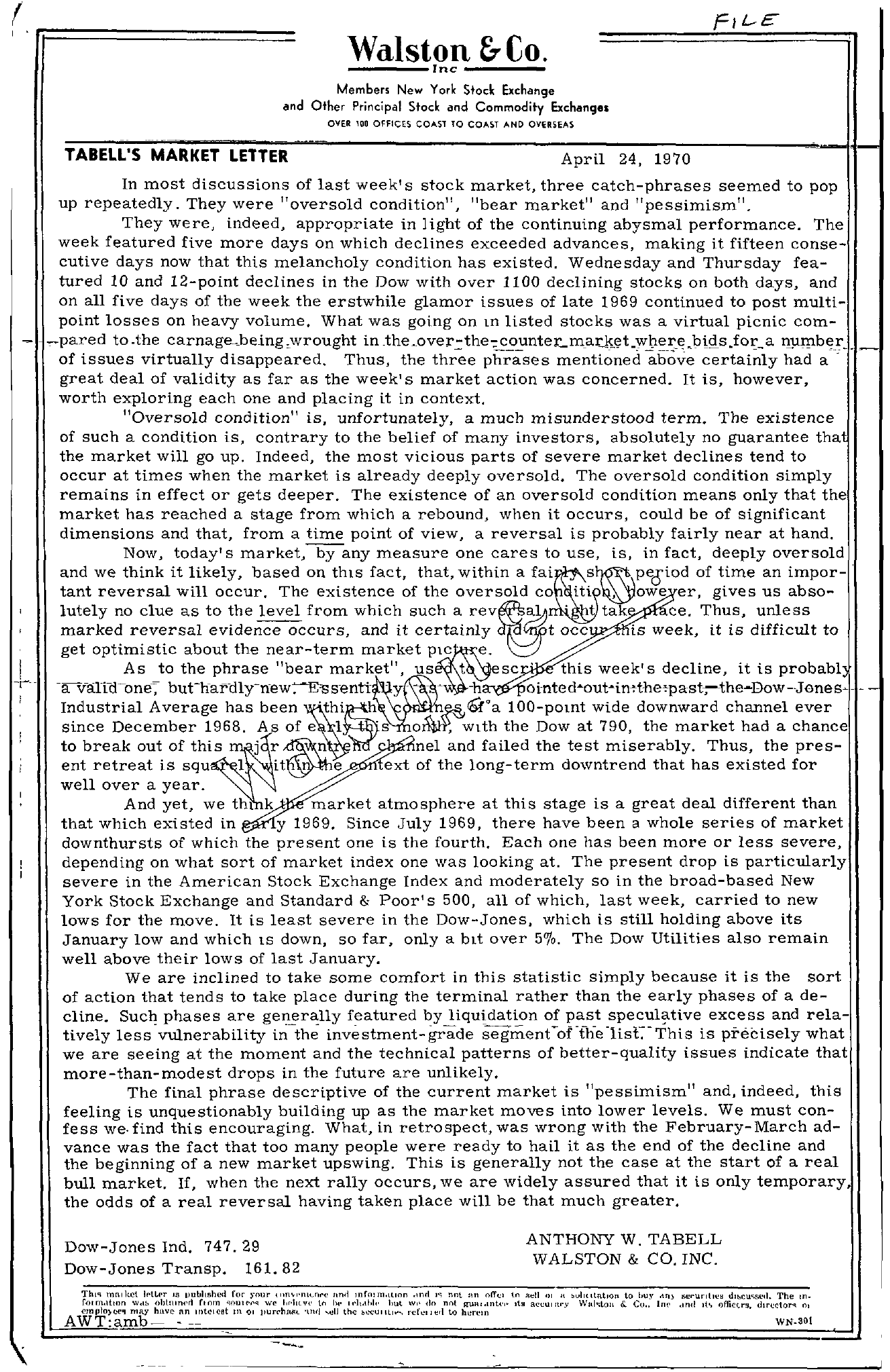 ( W—-a–l-s–tIonnc–&—-C–o–. Members New York Stock Exchange and Other Principal Stock and Commodity Exchange. OVER 100 OFFICES COAST TO COAST AND OVERSEAS TABELL'S MARKET LETTER April 24, 1970 In most discussions of last week's stock market, three catch-phrases seemed to pop up repeatedly. They were oversold condition, bear market and pessimism. They were, indeed, appropriate in light of the continuing abysmal performance. The week featured five more days on which declines exceeded advances, making it fifteen conse- cutive days now that this melancholy condition has existed. Wednesday and Thursday fea- tured 10 and 12-point declines in the Dow with over 1100 declining stocks on both days, and on all five days of the week the erstwhile glamor issues of late 1969 continued to post multi- point losses on heavy volume. What was going on m listed stocks was a virtual picnic com- pared to .the carnage.being cwrought in the .overthe-countermar.k!t w1)ere.biQs .ora .. of issues virtually disappeared. Thus, the three phrases mentioned ab'ove certainly had a great deal of validity as far as the week's market action was concerned. It is, however, worth exploring each one and placing it in context. Oversold condition is, unfortunately, a much misunderstood term. The existence of such a condition is, contrary to the belief of many investors, absolutely no guarantee tha the market will go up. Indeed, the most vicious parts of severe market declines tend to occur at times when the market is already deeply oversold. The oversold condition simply remains in effect or gets deeper. The existence of an oversold condition means only that the market has reached a stage from which a rebound, when it occurs, could be of Significant dimensions and that, from a time point of view, a reversal is probably fairly near at hand. Now, today's market, by any measure one cares to use, is, in fact, deeply oversold and we think it likely, based on thIS fact, that, within a of time an impor- ' tant reversal will occur. The existence of the oversold co iti er, gives us abso- lutely no clue as to the level from which such a . t tak ceo Thus, unless marked reversal evidence occurs, and it certainly aM, t occ is week, it is difficult to get optimistic about the near-term market p mec. -I,- As to the phrase bear market, us t sc this week's decline, it is probabl. 'avarnrone .. -h ointedoutin–t-hepast-;–the-Dow-Jones — Industrial Average has been 100-pomt wide downward channel ever since December 1968. As of e I 's or'WP, WIth the Dow at 790, the market had a chance to break out of r nel and failed the test miserably. Thus, the pres- ent retreat is squ I ext of the long-term downtrend that has existed for well over a year. And yet, we thl k market atmosphere at this stage is a great deal different than that which existed in y 1969. Since July 1969, there have been a whole series of market downthursts of which the present one is the fourth. Each one has been more or less severe, depending on what sort of market index one was looking at. The present drop is particularly severe in the American Stock Exchange Index and moderately so in the broad-based New York Stock Exchange and Standard & Poor's 500, all of which, last week, carried to new lows for the move. It is least severe in the Dow-Jones, which is still holding above its January low and which IS down, so far, only a bit over 50/0. The Dow Utilities also remain well above their lows of last January. We are inclined to take some comfort in this statistic simply because it is the sort of action that tends to take place during the terminal rather than the early phases of a de- cline. Such phases are generally featured by liquidation of past speculative excess and rela- tively less'vulnerability investment-grade segmenCoIfne'lisC-This is preCisely what we are seeing at the moment and the technical patterns of better-quality issues indicate that more-than-modest drops in the future are unlikely. The final phrase descriptive of the current market is pessimism and, indeed, this feeling is unquestionably building up as the market moves into lower levels. We must confess we find this encouraging. What, in retrospect, was wrong with the February-March ad- vance was the fact that too many people were ready to hail it as the end of the decline and the beginning of a new market upswing. This is generally not the case at the start of a real bull market. If, when the next rally occurs, we are widely assured that it is only temporary, the odds of a real reversal having taken place will be that much greater. DOW-Jones Ind. 747.29 Dow-Jones Transp. 161. 82 ANTHONY W. TABELL WALSTON & CO. INC. Thl'l l'rl.llIket Il'tl'T 1 ImtJhshei for your Hnd mfOlm.lllol ,,,111 1; not all offel tn sell 01 11 bullulntlon to buy rtf!) SCf'Ufltlt'9 UlbCU;SI,1. The tn. rOlm.ltmn Wl!, (1)tllnl'l'1 florn lOUII' we Iohlvl' tn Iw l'h,d,I hut WI' do not JroHI,mtl aCCUIJtry WHltOll 8.. Co Inc .Inll offictrs, (lircctor,. 01 may huve nn IntclcBt III 01 11Uf('hHSl 'Hul '.!IJ thc to hcrcln AWTamb- — WN.301