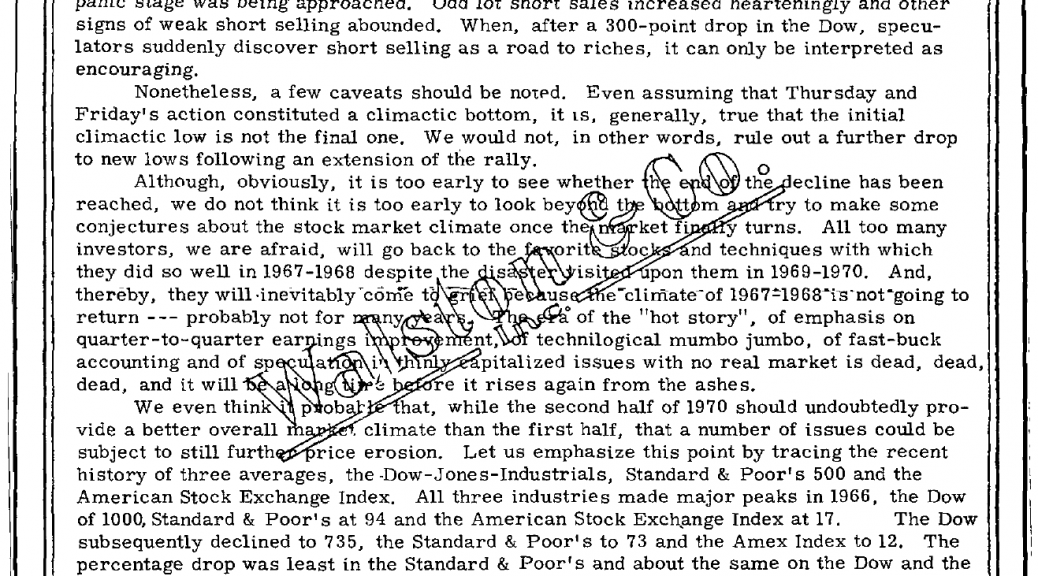 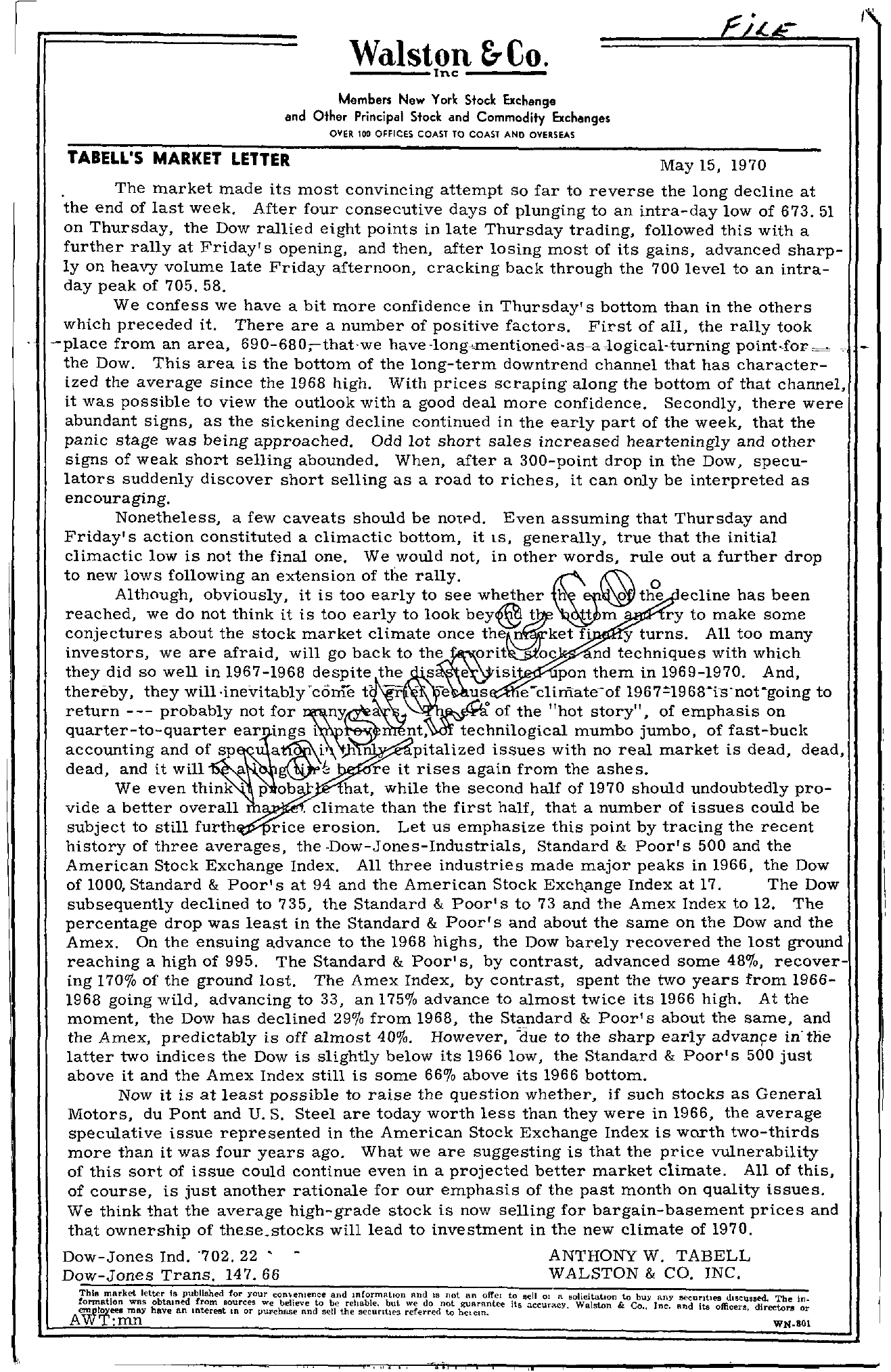 1 W—-a–l-s-Itnocn—&—C–o–. Members New York Stock Exchange and Other Principal Stock and Commodity Exchange. OVER 100 OFFICES COAST TO COAST AND OVERSEAS lABEll'S MARKEl lETTER May 15, 1970 . The market made its most convincing attempt so far to reverse the long decline at the end of last week. After four consecutive days of plunging to an intra-day low of 673. 51 on Thursday, the Dow rallied eight points in late Thursday trading, followed this with a further rally at Friday's opening, and then, after losing most of its gains, advanced sharp- lyon heavy volume late Friday afternoon, cracking back through the 700 level to an intraday peak of 705. 58. We confess we have a bit more confidence in Thursday's bottom than in the others which preceded it. There are a number of positive factors. First of all, the rally took -place from an area, 690-680,thatwe point.foI' the Dow. This area is the bottom of the long-term downtrend channel that has character- ized the average since the 1968 high. With prices scraping along the bottom of that channel, it was possible to view the outlook with a good deal more confidence. Secondly, there were abundant signs, as the Sickening decline continued in the early part of the week, that the panic stage was being approached. Odd lot short sales increased hearteningly and other signs of weak short selling abounded. When, after a 300-point drop in the Dow, specu- lators suddenly discover short selling as a road to riches, it can only be interpreted as encouraging. Nonetheless, a few caveats should be notf'd. Even assuming that Thursday and Friday's action constituted a climactic bottom, it lS, generally, true that the initial climactic low is not the final one. We would not, in other words, rule out a further drop to new lows following an extension of the rally. 0 Although, obviously, it is too early to see whether Ii ecline has been reached, we do not think it is too early to look t m ry to make some conjectures about the stock market climate once the ket fi y turns. All too many investors, we are afraid, will go back to oc nd techniques with which they did so well in 1967-1968 despite the 's e isi pan them in 1969-1970. And, thereby, they willinevitably'come -e us e-clirilate-of to return — probably not for quarter-to-quarter ear ings 1 of the hot story, of emphasis on nt, technilogical mumbo jumbo, of fast-buck accounting and of sp pitalized issues with no real market is dead, dead, dead, and it will re it rises again from the ashes. We even thinK' p ob hat, while the second half of 1970 should undoubtedly pro- vide a better overall . climate than the first half, that a number of issues could be subject to still furth rice erosion. Let us emphasize this point by tracing the recent history of three averages, the -Dow-Janes-Industrials, Standard & Poor's 500 and the American Stock Exchange Index. All three industries made major peaks in 1966, the Dow of 1000, Standard & Poor's at 94 and the American Stock Exch,ange Index at 17. The Dow subsequently declined to 735, the Standard & Poor's to 73 and the Amex Index to 12. The percentage drop was least in the Standard & Poor's and about the same on the Dow and the Amex. On the ensuing advance to the 1968 highs, the Dow barely recovered the lost ground reaching a high of 995. The Standard & Poor's, by contrast, advanced some 48, recover- ing 170 of the ground 10 st. The Amex Index, by contrast, spent the two years from 1966- 1968 going wild, advancing to 33, an 175 advance to almost twice its 1966 high. At the moment, the Dow has declined 29 from 1968, the Standard & Poor's about the same, and the Amex, predictably is off almost 40. However, to the sharp early advanye in'the latter two indices the Dow is slightly below its 1966 low, the Standard & Poor's 500 just above it and the Amex Index still is some 66 above its 1966 bottom. Now it is at least possible to raise the question whether, if such stocks as General Motors, du Pont and U. S. Steel are today worth less than they were in 1966, the average speculative issue represented in the American Stock Exchange Index is worth two-thirds more than it was four years ago. What we are suggesting is that the price vulnerability of this sort of issue could continue even in a projected better market climate. All of this, of course, is just another rationale for our emphasis of the past month on quality issues. We think that the average high-grade stock is now selling for bargain-basement prices and that ownership of the,se.stocks will lead to investment in the new climate of 1970. Dow-Jones Ind. '702.22 ' Dow-Jones Trans. 147.66 ANTHONY W. TABELL WALSTON & CO. INC. This market letter Is publlshed for your con.. emence and mCormlitlon lind IS not an offel to sell 01 II. solicitation to buy any dISCUSsed. Th I formation was may hoabvtaeinaend from mtere8 sources t In or we belie PUl'chase vnenato be rehable. but the securltl(s we ref edrroedntoot guarantee hetCln. Its accuracy . Walston & Co Inc … and Its ffi 0 cere, dl t ree o' rtl onr Aw Tmn WN.''' . .,,, a i , .j