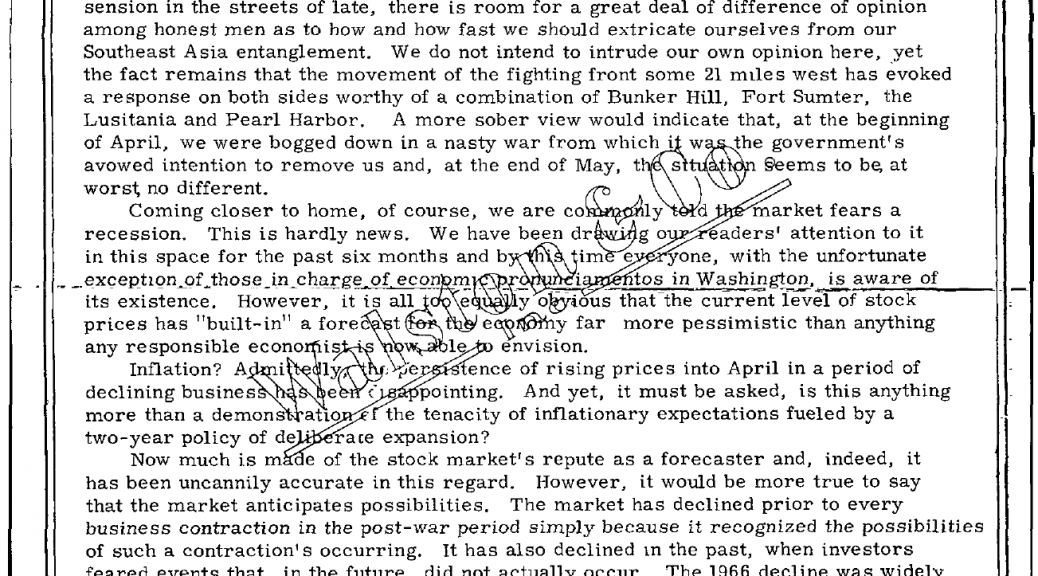 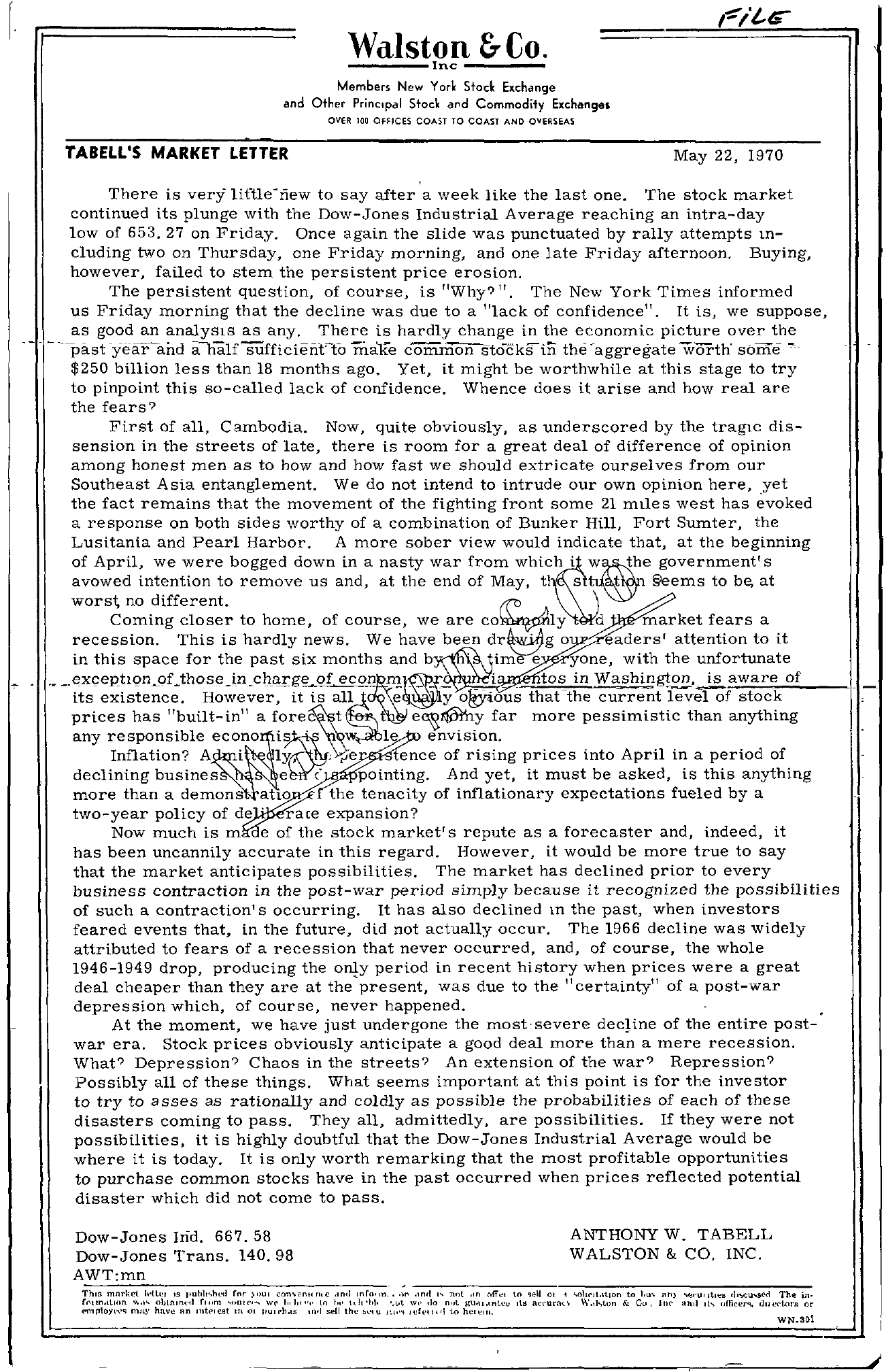 r Wdlston &Co. —–Inc —-Members New York Stock Exchange and Other PrincIpal Stock dod Commodity Exchange. OVER 100 OFFICES COAST TO COAST AND OVERSEAS TABELL'S MARKET LETTER May 22, 1970 There is very liftle-new to say after a week like the last one. The stock market continued its plunge with the Dow-Jones Industrial Average reaching an intra-day low of 653.27 on Friday. Once again the slide was punctuated by rally attempts in- cluding two on Thursday, one Friday morning, and one late Friday afternoon. Buying, however, failed to stem the persistent price erosion. The persistent question, of course, is Why. The New York Times informed us Friday morning that the decline was due to a lack of confidence. It is, we suppose, as good an analysls as any. There is hardly change in the economic picture over the –past -year and ii-halfsufficieiino maKe comriloi'iStocksin the 'aggregate worth' shine ,. 250 billion less than 18 months ago. Yet, it might be worthwhile at this stage to try to pinpoint this so-called lack of confidence. Whence does it arise and how real are the fears First of all, Cambodia. Now, quite obviously, as underscored by the traglc dis- sension in the streets of late, there is room for a great deal of difference of opinion among honest men as to how and how fast we should extricate ourselves from our Southeast Asia entanglement. We do not intend to intrude our own opinion here, 'yet the fact remains that the movement of the fighting front some 21 mlles west has evoked a response on both sides worthy of a combination of Bunker Hill, Fort Sumter, the Lusitania and Pearl Harbor. A more sober view would indicate that, at the beginning of April, we were bogged down in a nasty war from government's avowed intention to remove us and, at the end of May, t s t seems to be, at wors1; no different. (0' ;, Coming closer to home, of course, we are d market fears a recession. This is hardly news. We have been 0 eaders' attention to it in this space for . t.he .pa.st six months and '\imYe yone, with the unfortunate . of econ tos in Washington, is aware of its existence. However;–it is that-the current level of stock prices has bUilt-in a f far more pessimistic than anything any responsible econo Ie envision. Inflation A i 1)f, ; ,,-e ence of rising prices into April in a period of declining busines e ( pointing. And yet, it must be asked, is this anything more than a demons atlO the tenacity of inflationary expectations fueled by a two-year policy of de' race expansion Now much is m e of the stock market's repute as a forecaster and, indeed, it has been uncannily accurate in this regard. However, it would be more true to say that the market anticipates possibilities. The market has declined prior to every business contraction in the post-war period simply because it recognized the possibilities of such a contraction's occurring. It has also declined in the past, when investors feared events that, in the future, did not actually occur. The 1966 decline was widely attributed to fears of a recession that never occurred, and, of course, the whole 1946-1949 drop, producing the on!y period in recent history when prices were a great deal cheaper than they are at the present, was due to the certainty of a post-war depression which, of course, never happened. At the moment, we have just undergone the most-severe decline of the entire post- war era. Stock prices obviously anticipate a good deal more than a mere recession. What Depression Chaos in the streets An extension of the war Repression Possibly all of these things. What seems important at this point is for the investor to try to asses as rationally and coldly as possible the probabilities of each of these disasters coming to pass. They all, admittedly, are possibilities. If they were not possibilities, it is highly doubtful that the Dow-Jones Industrial Average would be where it is today. It is only worth remarking that the most profitable opportunities to purchase common stocks have in the past occurred when prices reflected potential disaster which did not come to pass. Dow-Jones Ind. 667. 58 Dow-Jones Trans. 140.98 AWTmn ThIS mnrkct ;1'IS Iluhhh…d for )')UI ('onH'n!lIllC ,lnll ,nrO'Ill . mI,,, not ,In ofTel to ..Il 01 rnun.Lllon ,. oLLl'tln(,,1 11m -.ou!t W(' 1 1 I- lo 10 1.11 -1,1. -,l,t WI' do nut gUllolTlll'l Ihl ('mnloYI',; mny havl.' lin IlIttlcat III 01 IIUll'h.ls 'Ifill sell the lefl'fll,i to hl.'ll'llI. ANTHONY W. TABELL WALSTON & CO. INC. 'o1i(,It.lt\on tAl /HI) w,utilles fh'Cu.,s('d The in- \\'j.,tnll & CU. JU(' an,l It., I,fficl'r'l. ulll''wrs or WN.301