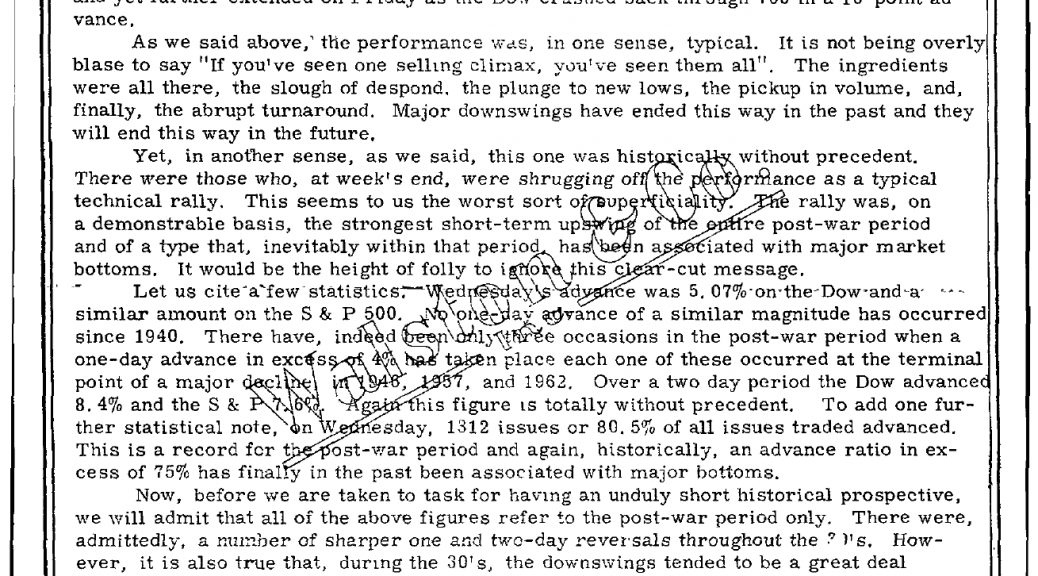 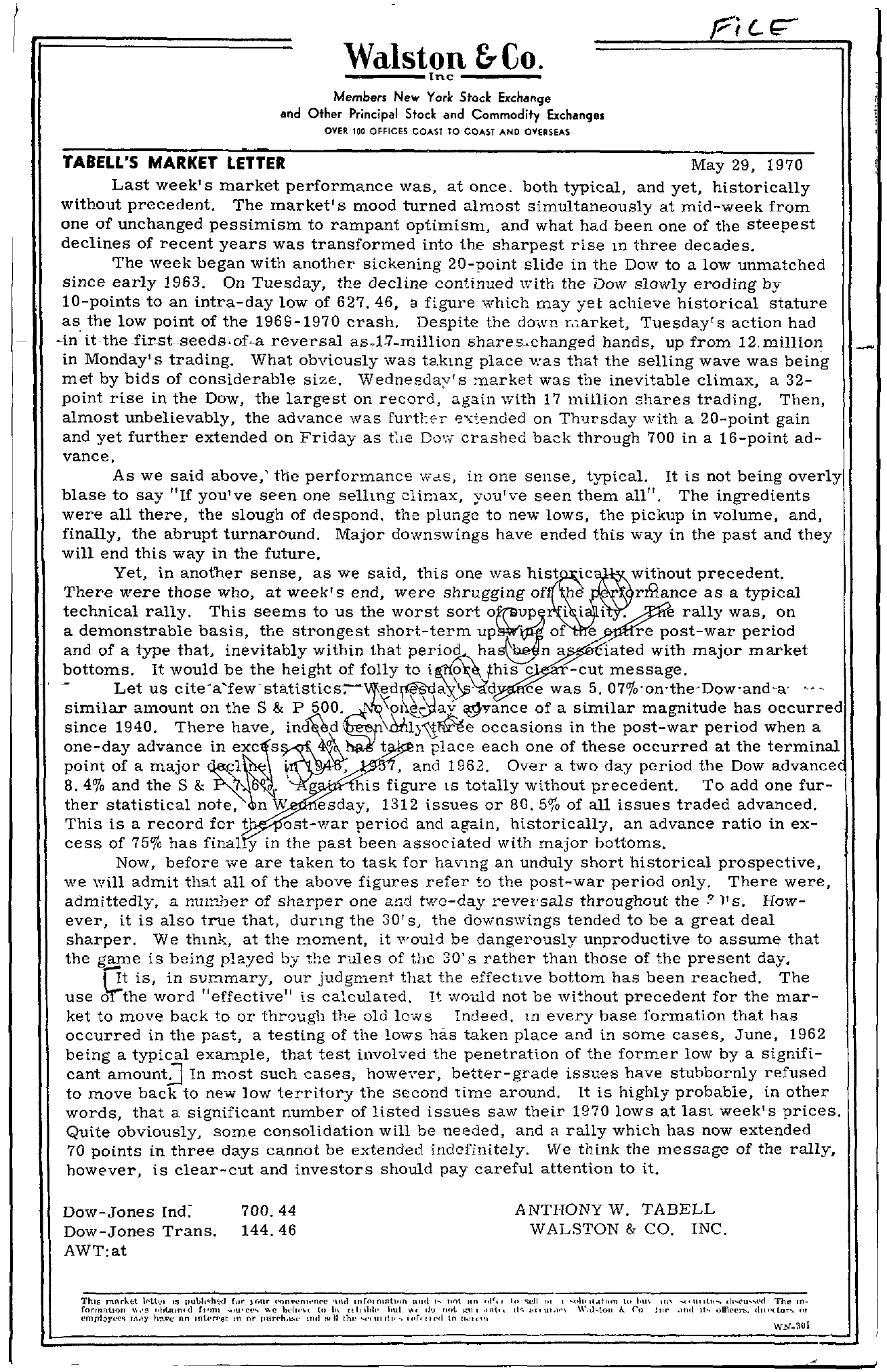 ( Walston &Co. Inc Members New York Stock Exchange and Other Principal Siock and Commodity Exchange. OVER 100 OFFICES COAST TO COAST AND QVEASEAS TABELL'S MARKET LETTER May 29, 1970 Last week's market performance was, at once. both typical, and yet, historically without precedent. The market's mood turned almost simultaneously at mid-week from one of unchanged pessimism to rampant optimism, and what had been one of the steepest declines of recent years was transformed into the sharpest rise ill three decades. The week began with another sickening 20-point slide in the Dow to a low unmatched since early 1963. On Tuesday, the decline continued with the Dow slowly eroding by 10-points to an intra-day low of 627.46, a figure which may yet achieve historical stature as the low point of the 1969-1970 crash. Despite the down Earket, Tuesday's action had -in it the fir-stseeds.of.a reversal as.1'7-million hands, up from 12. million in Monday's trading. What obviously was ta.klllg place was that the selling wave was being met by bids of considerable size. Wednesday's market was the inevitable climax, a 32- point rise in the Dow, the largest on record, again with 17 minion shares trading. Then, almost unbelievably, the ad\'ance was furth'r extended on Th11rsday ith a 20-point gain and yet further extended on Friday as tle Do'., crashed back through 700 in a 16-point ad- vance. As we said above,' the performance WdS, in one sense, typical. It is not being overly blase to say If you've seen one selllllg climax, y,ru've seen them all. The ingredients were all there, the slough of despond. the plunge to new lows, the pickup in volume, and, finally, the abrupt turnaround. Major downswings have ended this way in the past and they will end this way in the future. Yet, in another sense, as we said, this one was There were those who, at week's end, were shrugging of he without precedent. rl.ance as a typical technical rally. This seems to us the worst sort orrae1P i i i . e rally was, on a demonstrable basis, the strongest short-term upW! of e re post-war period and of a type that, inevitably within that ha n a iated with major market bottoms. It would be the height of folly to this c -cut message. .- Let us ce was 5. 07'on'the-Dow-and-a- '.– similar amount on the S & P of a similar magnitude has occurred since 1940. There have, occasions in the post-war period when a one-day advance in I t n place each one of these occurred at the terminal point of a major , and 1962. Over a two day period the Dow advance 8.4 and the S & .'. . his figure IS totally without precedent. To add one fur- ther statistical note, '\'n r .esday, 1312 issues or 80.5 of all issues traded advanced. This is a record fer tl. ost-war period and again, historically, an advance ratio in ex- cess of 75 has finaLy in the past been associated with major bottoms. Now, before we are taken to task for hav'll1g an unduly short historical prospective, we will admit that all of the above figures refer the post-war period only. There were, admittedly, a number of sharper one and two-day reve!'sals throughout the J' s. How- ever, it is also true that, durmg the 30's, the downswings tended to be a great deal sharper. We thlnk, at the y,),oment, it would be dangerously unproductive to assume that -the game is being played by the rules of the 30' s rather than those of the present day. I It is, in s1)y,),mary, our judgment that the effective bottom has been reached. The use drthe word effective is calculated. It would not be wihout precedent for the mar- ket to move back to or through the old lows Indeed. In every base formation that has occurred in the past, a testing of the lows has taken place and in some cases, June, 1962 being a typical example, that test involved the penetration of the former low by a signifi- cant amount In most such cases, howeyer, better- grade issues have stubbornly refused to move back to new low territory the second time around. It is highly probable, in other words, that a significant number of listed issues saw their 1970 lows at last week's prices. Quite obviously, some consolidation will be needed, and a rally which has now extended 70 points in three days cannot be extended ind(!finitely. We think the message of the rally, however, is clear-cut and investors should pay careful attention to it. Dow-Jones Ind Dow-Jones Trans. AWTat 700.44 144.46 ANTHONY W. TABELL WALSTON & CO. INC. ThIS rnnrktt l… IS fur (.llr ,'onv('nWl\r( '\1\,\ L,,(Otnmtwn !Iud h not un ,,\, , 10 it'll rot t \Ltt.ltm tu I,u\ 111\ ….. \Illt …. ..t'fl The Ul- formah')l1 '\,'5 blaln,a f1',1 'U'ct' ,,C tto \ ttl, ,hit I,ut ,I' dl) -tIll nt., It; tH'U), J,. ('0 JII ,ltH II .. Ofi,,Ib. ,h,Wr., ' have all Ifltl'rf'st III or PUn'h,l.M' ulIl 11 hl' .., III It!… .r. ,t 1 to