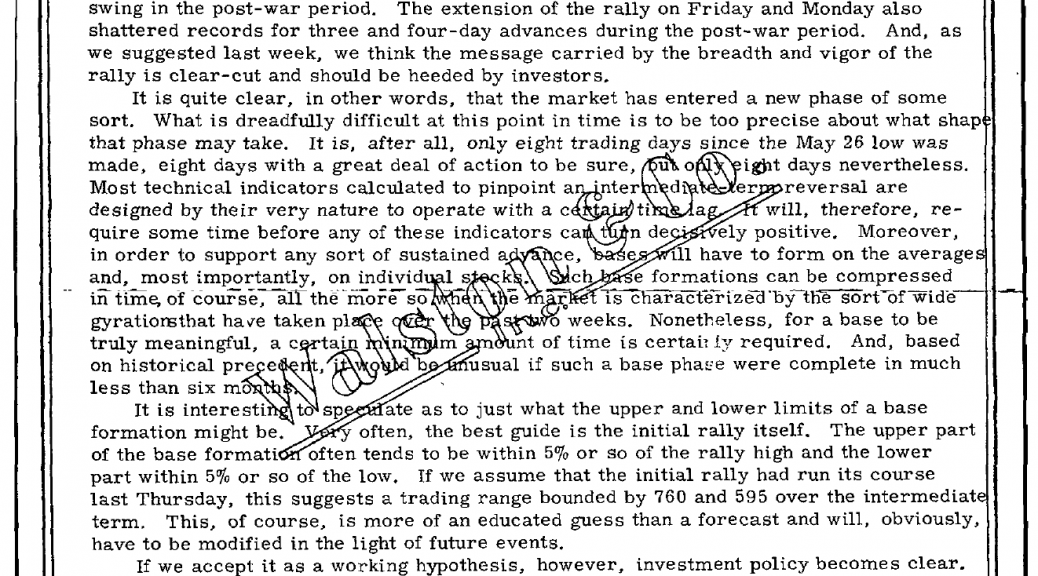 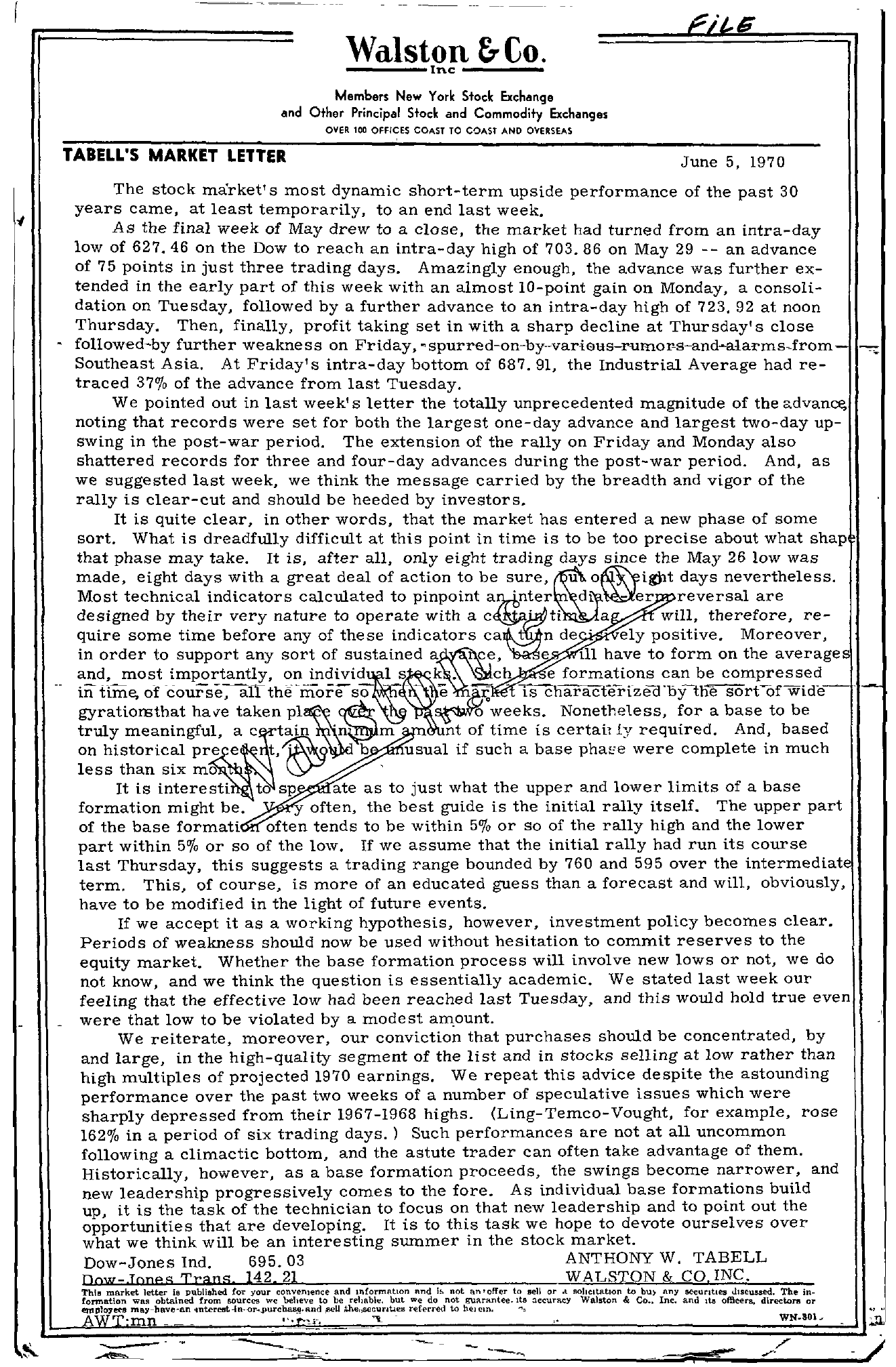 Walston &- Co. —–lnc —– Members New York Stock Exchange and Other Principal Stock and Commodity Exchanges OVER 100 OFFICES CQAST TO COAST AND Q\'ERSEAS TABELL'S MARKET LETTER June 5, 1970 The stock market's most dynamic short-term upside performance of the past 30 years carne, at least temporarily, to an end last week. As the final week of May drew to a close, the market had turned from an intra-day low of 627.46 on the Dow to reach an intra-day high of 703.86 on May 29 — an advance of 75 points in just three trading days. Amazingly enough, the advance was further ex- tended in the early part of this week with an almost lO-point gain on Monday, a consoli- dation on Tuesday, followed by a further advance to an intra-day high of 723. 92 at noon Thursday. Then, finally, profit taking set in with a sharp decline at Thursday's close followed-by further weakness on Friday, Southeast Asia. At Friday's intra-day bottom of 687.91, the Industrial Average had re- traced 37 of the advance from last Tuesday. We pointed out in last week's letter the totally unprecedented magnitude of the advana; noting that records were set for both the largest one-day advance and largest two-day up- swing in the post-war period. The extension of the rally on Friday and Monday also shattered records for three and four-day advances during the post-war period. And, as we suggested last week, we think the message carried by the breadth and vigor of the rally is clear-cut and should be heeded by investors. It is quite clear, in other words, that the market has entered a new phase of some sort. What is dreadfully difficult at this point in time is to be too precise about what shap that phase may take. It is, after all, only eight trading days since the May 26 low was made, eight days with a great deal of action to be sure, days nevertheless. Most technical indicators calculated to pinpoint a9rbnter dr reversal are designed by their very nature to operate with a a will, therefore, re- quire some time before any of these indicators de' ely positive. Moreover, in order to support any sort of sustained 111 have to form on the average and,most. fmP2rtantly, in time, of course, all the more so k. is cl1aracterized'oy tlie sortof wide gyratiornthat have taken weeks. Nonetheless, for a base to be truly meaningful, a c nt of time is certail iy required. And, based on historical pre e t,' b usual if such a base pha'e were complete in much less than six mo ' It is interesti to sp as to just what the upper and lower limits of a base formation might be. often, the best guide is the initial rally itself. The upper part of the base formati often tends to be within 5 or so of the rally high and the lower part within 5 or so of the low. If we assume that the initial rally had run its course last Thursday, this suggests a trading range bounded by 760 and 595 over the intermediate term. This, of course, is more of an educated guess than a forecast and will, obviously, have to be modified in the light of future events. If we accept it as a working hypothesis, however, investment policy becomes clear. Periods of weakness should now be used without hesitation to commit reserves to the equity market. Whether the base formation process will involve new lows or not, we do not know, and we think the question is essentially academic. We stated last week our feeling that the effective low had been reached last Tuesday, and this would hold true even were that low to be violated by a modest amount. We reiterate, moreover, our conviction that purchases should be concentrated, by and large, in the high-quality segment of the list and in stocks selling at low rather than high multiples of projected 1970 earnings. We repeat this advice despite the astounding performance over the past two weeks of a number of speculative issues which were sharply depressed from their 1967-1968 highs. (Ling-Temco-Vought, for example, rose 162 in a period of six trading days.) Such performances are not at all uncommon following a climactic bottom, and the astute trader can often take advantage of them. Historically, however, as a base formation proceeds, the swings become narrower, and new leadership progressively comes to the fore. As individual base formations build up, it is the task of the technician to focus on that new leadership and to point out the opportunities that are developing. It is to this task we hope to devote ourselves over what we think will be an interesting summer in the stock market. Dow-Jones Ind. 695.03 ANTHONY W. TABELL Dow-Iones Trans 142 21 WALSTON & CO. INC. Thill ma.rket letter Is published ror your convenience and InCormntlon nnd 11 not a.n 'off(!r to sell or .t solicitation to bu) nny securities discussed. The In- rannatlon was obtained from sources we believe to be rehable, but we do not gulU'antee. lUI lccuracy Walston & Co., Inc. and Ita officers, dlrecton or ml\y-ho.ve-an .and ,sell ,the,,sec\lnues ref.erred to helem. …,