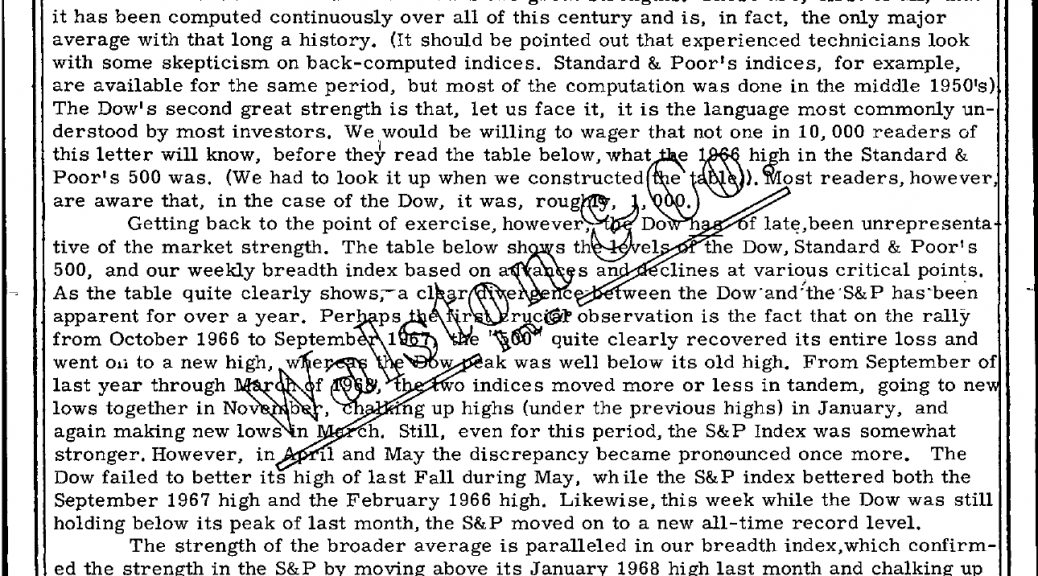 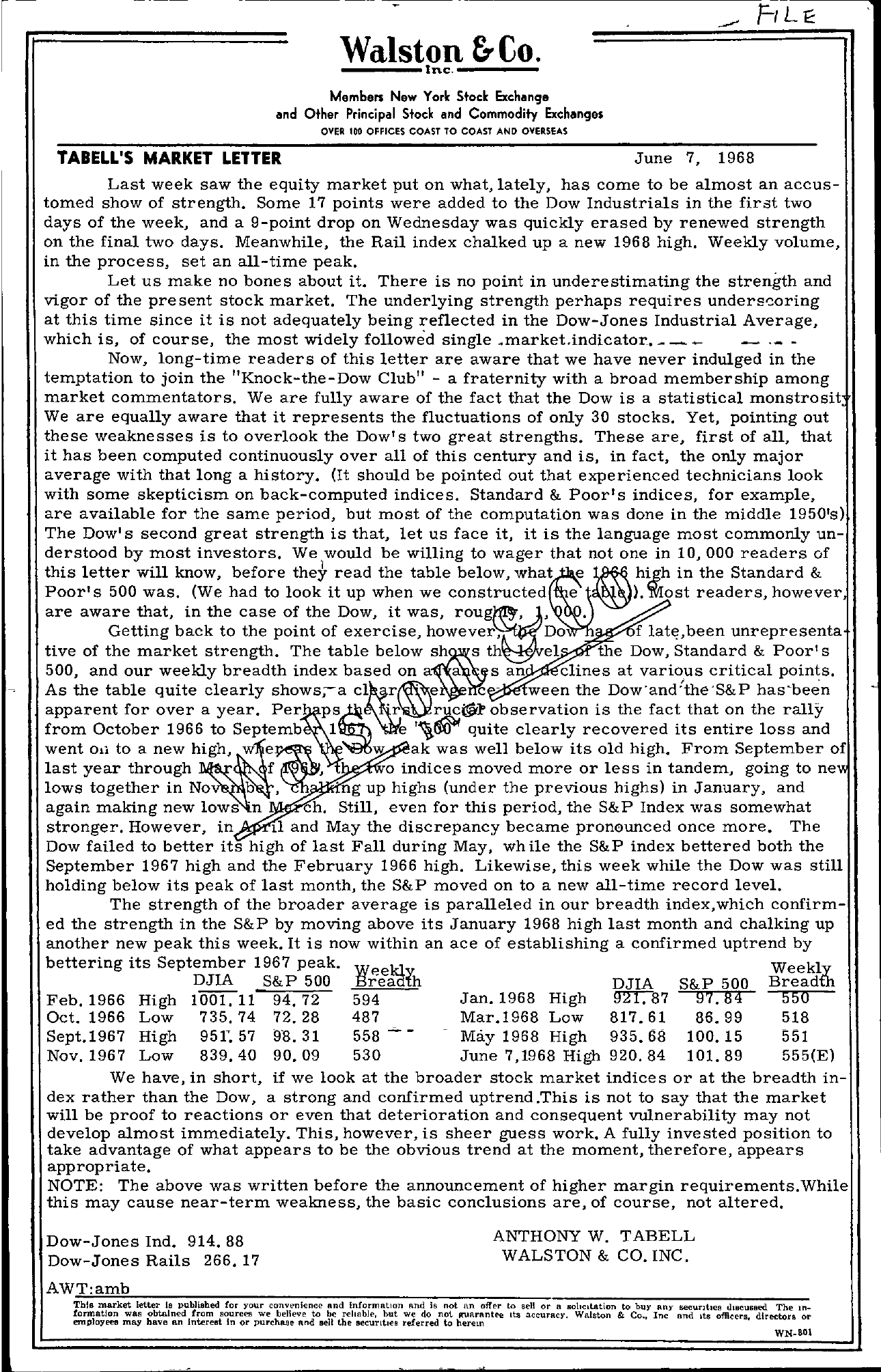 Walston &eo. – Members New York Stock Exchan98 and Other Principal Stock and Commodity Exchange. OVER 100 OFFICES COAST TO COAST AND OVERSEAS TABELL'S MARKET LETTER June 7, 1968 Last week saw the equity market put on what, lately, has come to be almost an accustomed show of strength. Some 17 points were added to the Dow Industrials in the fir03t two days of the week, and a 9-point drop on Wednesday was quickly erased by renewed strength on the final two days. Meanwhile, the Rail index chalked up a new 1968 high. Weekly volume, in the process, set an all-time peak. Let us make no bones about it. There is no point in underestimating the strength and vigor of the present stock market. The underlying strength perhaps requires unders(!oring at this time since it is not adequately being reflected in the Dow-Jones Industrial Average, which is, of course, the most widely followed single .markeLindicator. , Now, long-time readers of this letter are aware that we have never indulged in the temptation to join the Knock-the-Dow Club – a fraternity with a broad membership among market commentators. We are fully aware of the fact that the Dow is a statistical monstrosit We are equally aware that it represents the fluctuations of only 30 stocks. Yet, pointing out these weaknesses is to overlook the Dow's two great strengths. These are, first of all, that it has been computed continuously over all of this century and is, in fact, the only major average with that long a history. (It should be pOinted out that experienced technicians look with some skepticism on back-computed indices. Standard & Poor's indices, for example, are available for the same period, but most of the computation was done in the middle 1950's) The Dow's second great strength is that, let us face it, it is the language most commonly understood by most investors. We ,would be willing to wager that not one in 10,000 readers of this letter will know, before they read the table below, Poor's 500 was. (We had to look it up when we constructed e hih in the Standard & 'Most readers, however are aware that, in the case of the Dow, it was, Getting back to the point of exercise, however, . Do f unrepresenta tive of the market strength. The table below s 5 sth el the Dow, Standard & Poor's 500, and our weekly breadth index based on a a s an clines at variops critical pOints. As the table quite clearly shows;-a c – ween the Dow'and'the'S&P has'been apparent for over a year. observation is the fact that on the rally from October 1966 to Septemb 1 e quite clearly recovered its entire loss and went 0,; to a new gh, w ak was well below its old high. From September of last year through f, 0 indices moved more or less in tandem, going to ne lows together in No 15, 'ng up highs (under the previous highs) in January, and again making new lows 'n ch. Still, even for this period, the S&P Index was somewhat stronger. However, in 11 and May the discrepancy became pronounced once more. The Dow failed to better its high of last Fall during May, while the S&P index bettered both the September 1967 high and the February 1966 high. Likewise, this week while the Dow was still holding below its peak of last month, the S&P moved on to a newall-time record level. The strength of the broader average is paralleled in our breadth index,which confirm- ed the strength in the S&P by moving above its January 1968 high last month and chalking up another new peak this week. It is now within an ace of establishing a confirmed uptrend by bettering its September 1967 peak. kl DJIA S&P 500 ri' aoth Feb. 1966 High 1001. 11 94.72 594 Oct. 1966 Low 735.74 72.28 487 Sept.1967 High 951 57 98.31 558 – – Nov. 1967 Low 839.40 90.09 530 DJIA S&P 500 Jan.1968 High 97. 84 Mar.1968 Low 817.61 86.99 May 1968 High 935.68 100.15 June 7,1968 High 920.84 101. 89 Weekly Breadth 550 518 551 555(E) We have, in short, if we look at the broader stock market indices or at the breadth in- dex rather than the Dow, a strong and confirmed uptrend .This is not to say that the market will be proof to reactions or even that deterioration and consequent vulnerability may not develop almost immediately. This, however, is sheer guess work. A fully invested position to take advantage of what appears to be the obvious trend at the moment, therefore, appears appropriate. NOTE The above was written before the announcement of higher margin requirements.While this may cause near-term weakness, the basic conclusions are, of course, not altered. Dow-Jones Ind. 914.88 Dow-Jones Rails 266.17 ANTHONY W. TABELL WALSTON & CO. INC. AWTamb This market letter Is published for your convenience And InformatIOn Rnd is not an offer to sell or a Boilcllation to buy any secUrlties ,hscussoo The Information was obtained trom sources we believe to be rehable, but we do not InlfLrRntN! Its l.ccuracy, Walston & Co., Inc nnd Its officers, directors or emplOYee! may have an intereJIt in or purchase and sell the seCufltus referred to herem WNBOl