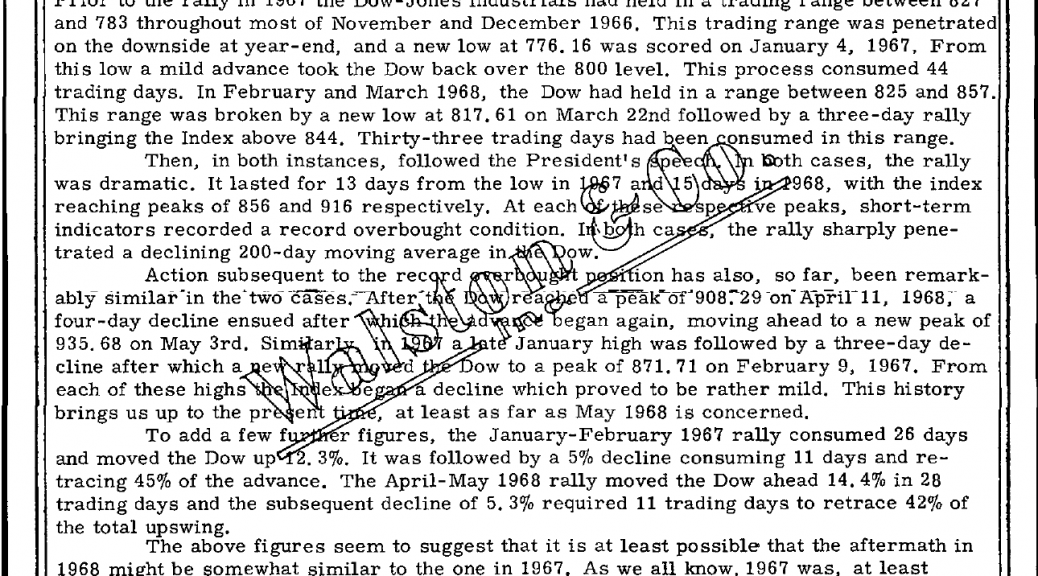 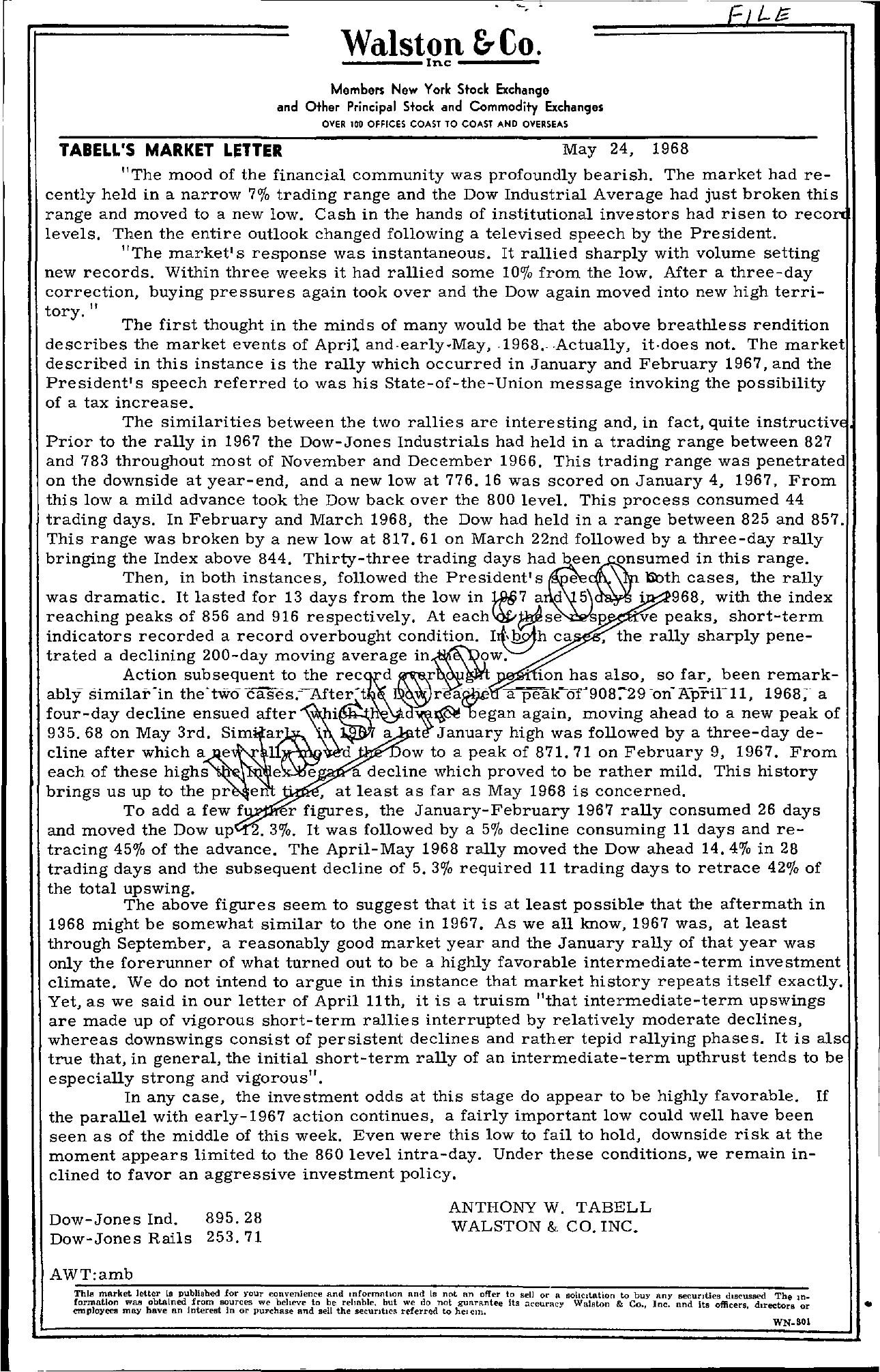 Walston &Co. LE Members New York Stock Exchange and Other Principal Stock and Commodity Exchange. OVER 100 OFFICES COAST TO COAST AND OVERSEAS TABEll'S MARKET lETTER May 24, 1968 The mood of the financial community was profoundly bearish. The market had re- cently held in a narrow 7 trading range and the Dow Industrial Average had just broken this range and moved to a new low. Cash in the hands of institutional investors had risen to reco levels. Then the entire outlook changed following a televised speech by the President. The market's response was instantaneous. It rallied sharply with volume setting new records. Within three weeks it had rallied some 10 from the low. After a three-day correction, buying pressures again took over and the Dow again moved into new high terri- tory. The first thought in the minds of many would be that the above breathless rendition describes the market events of April and-early.May, -1968. -Actually, it-does not. The market described in this instance is the rally which occurred in January and February 1967, and the President's speech referred to was his State-of-the-Union message invoking the possibility of a tax increase. The similarities between the two rallies are interesting and, in fact, quite instructiv Prior to the rally in 1967 the Dow-Jones Industrials had held in a trading range between 827 and 783 throughout most of November and December 1966. This trading range was penetrated on the downside at year-end, and a new low at 776. 16 was scored on January 4, 1967, From this Iowa mild advance took the Dow back over the 800 level. This process consumed 44 trading days. In February and March 1968, the Dow had held in a range between 825 and 857. This range was broken by a new low at 817.61 on March 22nd followed by a three-day rally bringing the Index above 844. Thirty-three trading days had in this range. Then, in both instances, followed the President' lSbth cases, the rally was dramatic. It lasted for 13 days from the low in ad 5 . 968, with the index reaching peaks of 856 and 916 respectively. At each\Q.,Wse R 've peaks, short-term indicators recorded a record overbought condition. Ih ca ,the rally sharply pene- trated a declining 200-day moving average Action subsequent to the – Tli'!JI1'rion has also, so far, been remark1968; a four-day decline ensued again, moving ahead to a new peak of 935.68 on May 3rd. Sim' a tor January high was followed by a three-day de- cline after which a e 1 d ow to a peak of 871. 71 on February 9, 1967. From each of these highs e e a decline which proved to be rather mild. This history brings us up to the pr e , at least as far as May 1968 is concerned. To add a few f r figures, the January-February 1967 rally consumed 26 days and moved the Dow up . 3. It was followed by a 5 decline consuming 11 days and re- tracing 45 of the advance. The April-May 1968 rally moved the Dow ahead 14.4 in 28 trading days and the subsequent decline of 5. 3 required 11 trading days to retrace 42 of the total upswing. The above figures seem to suggest that it is at least possible that the aftermath in 1968 might be somewhat similar to the one in 1967. As we all know, 1967 was, at least through September, a reasonably good market year and the January rally of that year was only the forerunner of what turned out to be a highly favorable intermediate-term investment climate. We do not intend to argue in this instance that market history repeats itself exactly. Yet, as we said in our letter of April 11 th, it is a truism that intermediate-term upswings are made up of vigorous short-term rallies interrupted by relatively moderate declines, whereas downswings consist of persistent declines and rather tepid rallying phases. It is als true that, in general, the initial short-term rally of an intermediate-term upthrust tends to be especially strong and vigorous. In any case, the investment odds at this stage do appear to be highly favorable. If the parallel with early-1967 action continues, a fairly important low could well have been seen as of the middle of this week. Even were this low to fail to hold, downside risk at the moment appears limited to the 860 level intra-day. Under these conditions, we remain in- clined to favor an aggressive investment policy. Dow-Jones Ind. 895.28 Dow-Jones Rails 253.71 ANTHONY W. TABELL WALSTON & CO. INC. AWTamb ThIs market letter (8 published for your convenience and mformntlon nnd Is not an offer to sell or a soliCitation to buy nny securities thscussed The In- formation was obttLlned from sources we believe to be rehable. but we do not gunrll.ntee its accuracy Wal8ton & Co., Inc. nnd its officers. directors or employees may have an interest in or purchase and sell the referred to hel em. WNBOl