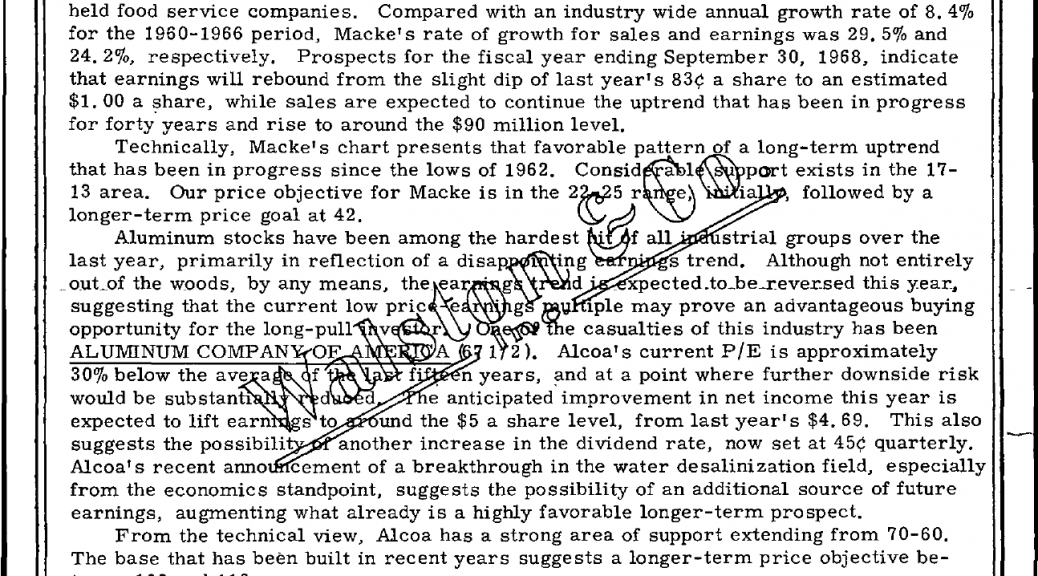 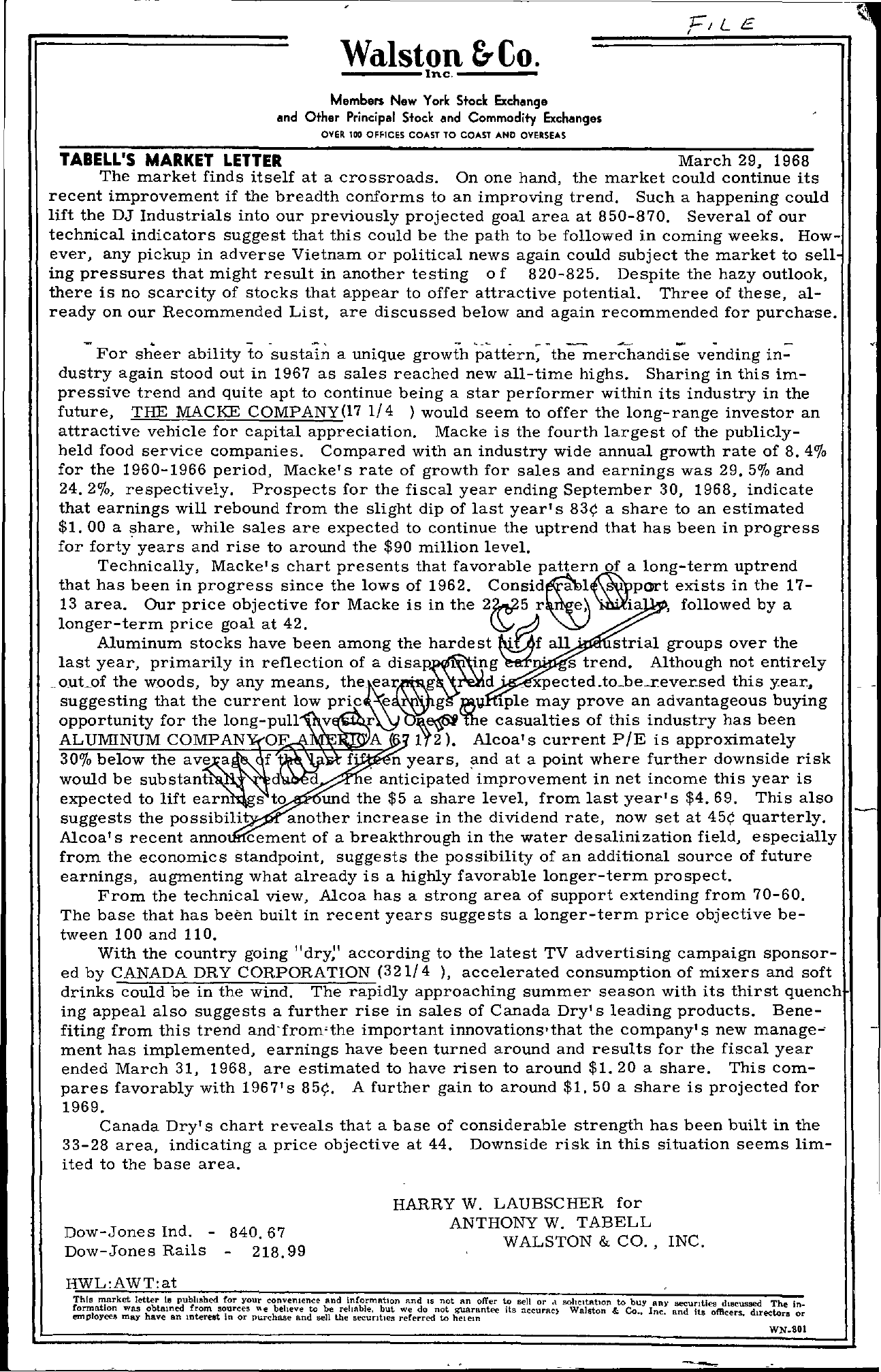 Walston &Co. –..;;;.;..; Inc. , L I Members New York Stock Exchange and Other Principal Stock and Commodity Exchanges OVER 100 OFFICES COAST TO COAST AND OVERSEAS TABEll'S MARKET lETTER March 29, 1968 The market finds itself at a crossroads. On one hand, the market could continue its recent improvement if the breadth conforms to an improving trend. Such a happening could lift the DJ Industrials into our previously projected goal area at 850-870. Several of our technical indicators suggest that this could be the path to be followed in coming weeks. How- ever, any pickup in adverse Vietnam or political news again could subject the market to sell ing pressures that might result in another testing 0 f 820-825. Despite the hazy outlook, there is no scarcity of stocks that appear to offer attractive potential. Three of these, al- ready on our Recommended List, are discussed below and again recommended for purchase. For sheer ability to sustdn a unique growth ve-nding in- dustry again stood out in 1967 as sales reached newall-time highs. Sharing in this im- pressive trend and quite apt to continue being a star performer within its industry in the future, THE MACKE COMPANy(l7 1/4 ) would seem to offer the long-range investor an attractive vehicle for capital appreciation. Macke is the fourth largest of the publicly- held food service companies. Compared with an industry wide annual growth rate of 8.40/0 for the 1960-1966 period, Macke's rate of growth for sales and earnings was 29. 50/0 and 24.20/0, respectively. Prospects for the fiscal year ending September 30, 1968, indicate that earnings will rebound from the slight dip of last year' s a share to an estimated 1. 00 a share, while sales are expected to continue the uptrend that has been in progress for forty years and rise to around the 90 million level. Technically, Macke's chart presents that favorable pattern of a long-term uptrend that has been in progress since the lows of 1962. exists in the 17- 13 area. Our price objective for Macke is in the 2'tf5 r e, ,followed by a longer-term price goal at 42. Aluminum stocks have been among the hardest Naf all . strial groups over the last year, primarily in reflection of a S trend. Although not entirely .. 0.uLof the woods, by any means, g d' xpected.toberever.sed this year, suggesting that the current low pric e 'g Iple may prove an advantageous buying opportunity for the long-pUll v casualties of this industry has been ALUMINUM COMPAN OE A 1'(2). Alcoa's current pIE is approximately 300/0 below the ave a f f' n years, and at a point where further downside risk would be substanh d e anticipated improvement in net income this year is s to und the 5 a share level, from last year's 4.69. This also suggests the possibili another increase in the dividend rate, now set at quarterly. Alcoa's recent anno cement of a breakthrough in the water desalinization field, especially from the economics standpoint, suggests the possibility of an additional source of future earnings, augmenting what already is a highly favorable longer-term prospect. From the technical view, Alcoa has a strong area of support extending from 70-60. The base that has been built in recent years suggests a longer-term price objective be- tween 100 and 110. With the country going dry;' according to the latest TV advertiSing campaign sponsor- ed by CANADA DRY CORPORATION (321/4 ), accelerated consumption of mixers and soft drinks could be in the wind. The rapidly approaching summer season with its thirst quench ing appeal also suggests a further rise in sales of Canada Dry's leading products. Bene- fiting from this trend and'from'the important innovations'that the company's new manage- ment has implemented, earnings have been turned around and results for the fiscal year ended March 31, 1968, are estimated to have risen to around 1. 20 a share. This com- pares favorably with 1967's A further gain to around 1. 50 a share is projected for 1969. Canada Dry's chart rev-eals that a base of considerable strength has been built in the 33-28 area, indicating a price objective at 44. Downside risk in this situation seems lim- ited to the base area. Dow-Jones Ind. – 840.67 Dow-Jones Rails 218.99 HARRY W. LAUBSCHER for ANTHONY W. TABELL WALSTON & CO., INC. HWLAWTat This market letter Is pubhshed for your convenience and information nnd IS not An offer to sell or .t soliCitation to buy any securltieu Ihscussed The in- formation was obtamed from sources 'e beheve to be reliable, but we do not guarantee its tecumc) Walston & Co., Inc. and its officers. director r emDtoyees may have an mterest in or purchl18e and sell the secuntles referred to heleln a0 WN.SOl