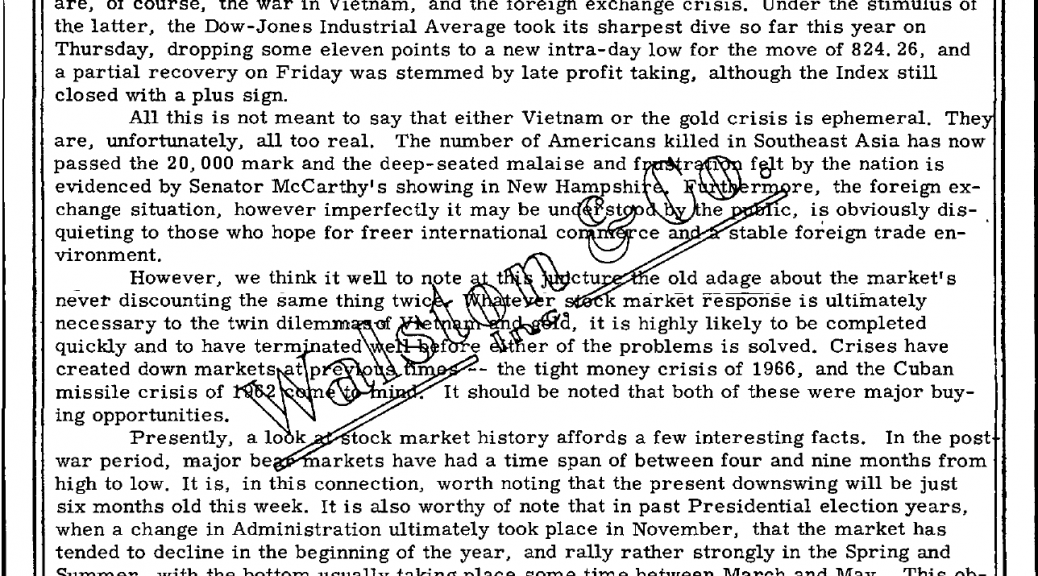 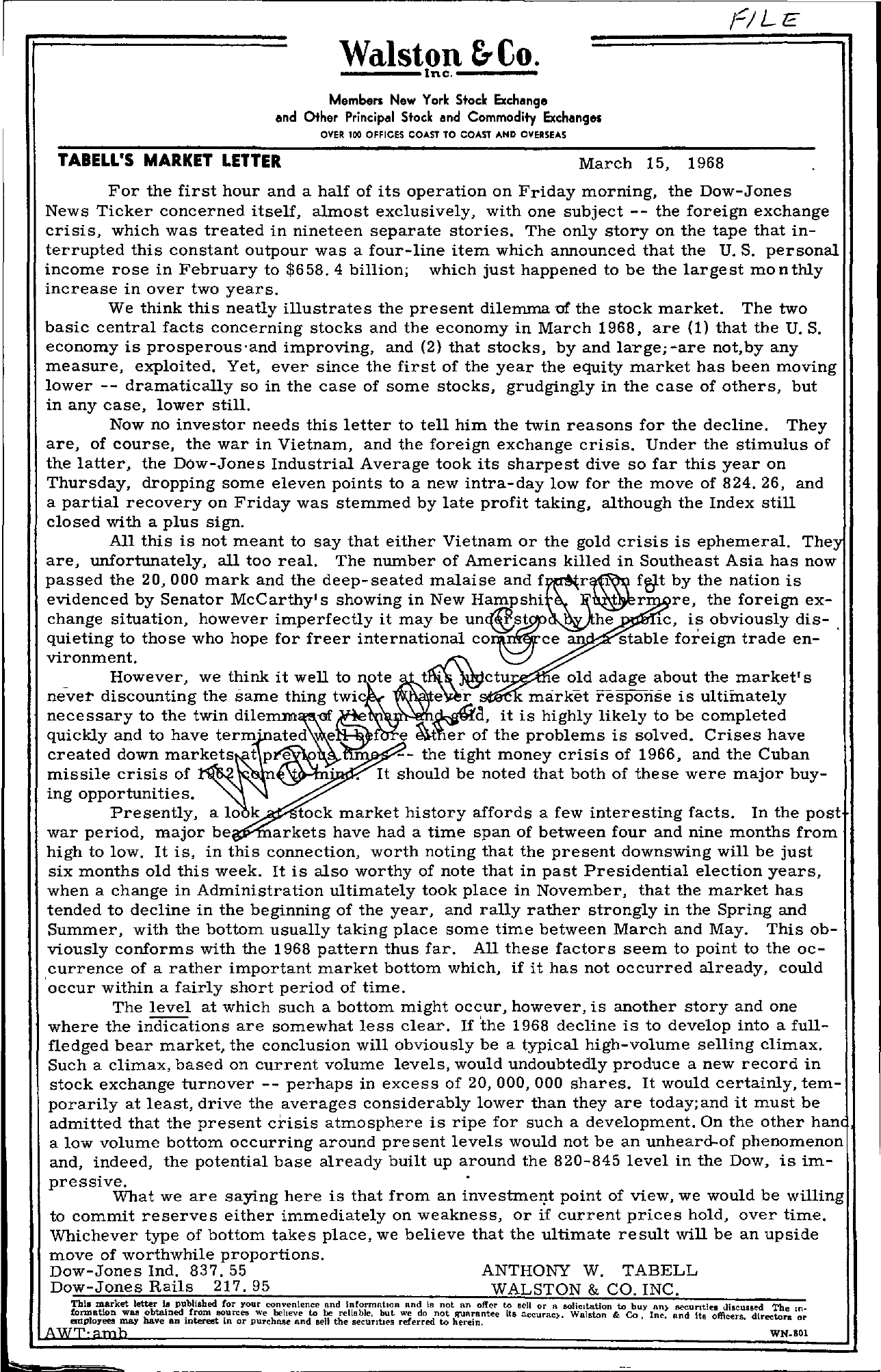 Walston &Co. lnc, Members New York Stock Exchange and Other Principal Stock and Commodity Exchanges OVER 100 OFFICES COAST TO COAST AND OVERSEAS TABELL'S MARKET LETTER March 15, 1968 For the first hour and a half of its operation on Friday morning, the Dow-Jones News Ticker concerned itself, almost exclusively, with one subject — the foreign exchange crisis, which was treated in nineteen separate stories. The only story on the tape that interrupted this constant outpour was a four-line item which announced that the U. S. personal income rose in February to 658.4 billion; which just happened to be the largest mo n thly increase in over two years. We think this neatly illustrates the present dilemma cl the stock market. The two basic central facts concerning stocks and the economy in March 1968, are (1) that the U. S. economy is prosperous' and improving, and (2) that stocks, by and large;-are not,by any measure, exploited. Yet, ever since the first of the year the equity market has been moving lower — dramatically so in the case of some stocks, grudgingly in the case of others, but in any case, lower still. Now no investor needs this letter to tell him the twin reasons for the decline. They are, of course, the war in Vietnam, and the foreign exchange crisis. Under the stimulus of the latter, the Dow-Jones Industrial Average took its sharpest dive so far this year on Thursday, dropping some eleven pOints to a new intra-day low for the move of 824. 26, and a partial recovery on Friday was stemmed by late profit taking, although the Index still closed with a plus sign. All this is not meant to say that either Vietnam or the gold crisis is ephemeral. The are, unfortunately, all too real. The number of Americans killed in Southeast Asia has now passed the 20,000 mark and the deep-seated malaise and evidenced by Senator McCarthy's showing in New Ha;m'shi fott by the nation is re, the foreign ex- change situation, however imperfectly it may be quieting to those who hope for freer international co he iC, is obviously disce stable foreign trade en- vironment. However, we think it well to neve!' discounting the same thing twic t' ctu e old adage about the market's e -r market response is ultimately necessary to the twin it is highly likely to be completed quickly and to have term' ated e e of the problems is solved. Crises have created down markets t — the tight money crisis of 1966, and the Cuban missile crisis of . It should be noted that both of these were major buy- ing opportunities. Presently, a 10 k tock market history affords a few interesting facts. In the post war period, major be arkets have had a time span of between four and nine months from high to low. It is, in this connection, worth noting that the present downswing will be just six months old this week. It is also worthy of note that in past Presidential election years, when a change in Administration ultimately took place in November, that the market has tended to decline in the beginning of the year, and rally rather strongly in the Spring and Summer, with the bottom usually taking place some time between March and May. This ob- viously conforms with the 1968 pattern thus far. All these factors seem to point to the oc- currence of a rather important market bottom which, if it has not occurred already, could 'occur within a fairly short period of time. The level at which such a bottom might occur, however, is another story and one where the indications are somewhat less clear. If the 1968 decline is to develop into a full- fledged bear market, the conclusion will obviously be a typical high-volume selling climax. Such a climax, based on current volume levels, would undoubtedly produce a new record in stock exchange turnover — perhaps in excess of 20,000,000 shares. It would certainly, tem- porarily at least, drive the averages considerably lower than they are today;and it must be admitted that the present crisis atmosphere is ripe for such a development. On the other han a low volume bottom occurring around pre sent levels would not be an unheard-of phenomenon and, indeed, the potential base already built up around the 820-845 level in the Dow, is im- pressive. . What we are saying here is that from an investmeItt point of view, we would be willing to commit reserves either immediately on weakness, or if current prices hold, over time. Whichever type of bottom takes place, we believe that the ultimate result will be an upside move of worthwhile proportions. Dow-Jones Ind. 837. 55 ANTHONY W. TABELL Dow-Jones Rails 217. 95 WALSTON & CO. INC. ThIll market letter \1'1 Jlublished for your convenience Bnd InformatIOn Rnd Is not an offer to sell or a soliCitation to buy an) secuntles ,Jiacussed The information W8.!I obtained.trom. sources We believe to be reliable. but we do not guarantee Its J.ccurac). Walston &. Co. Inc. and its officers. directors or employee! may have an IDterest in or pUl'chase and sell the securities referred to herein. WNBOl