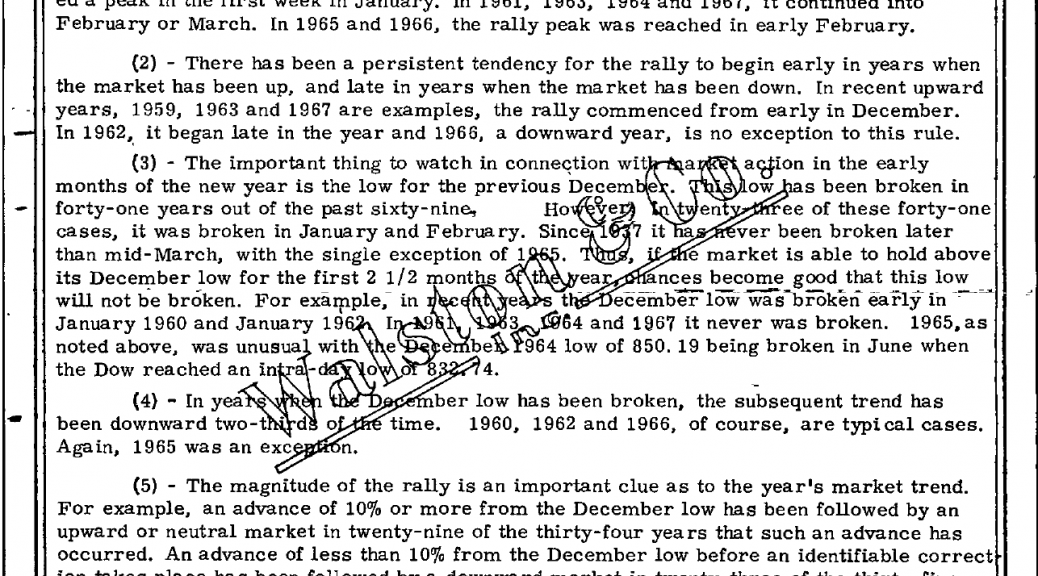 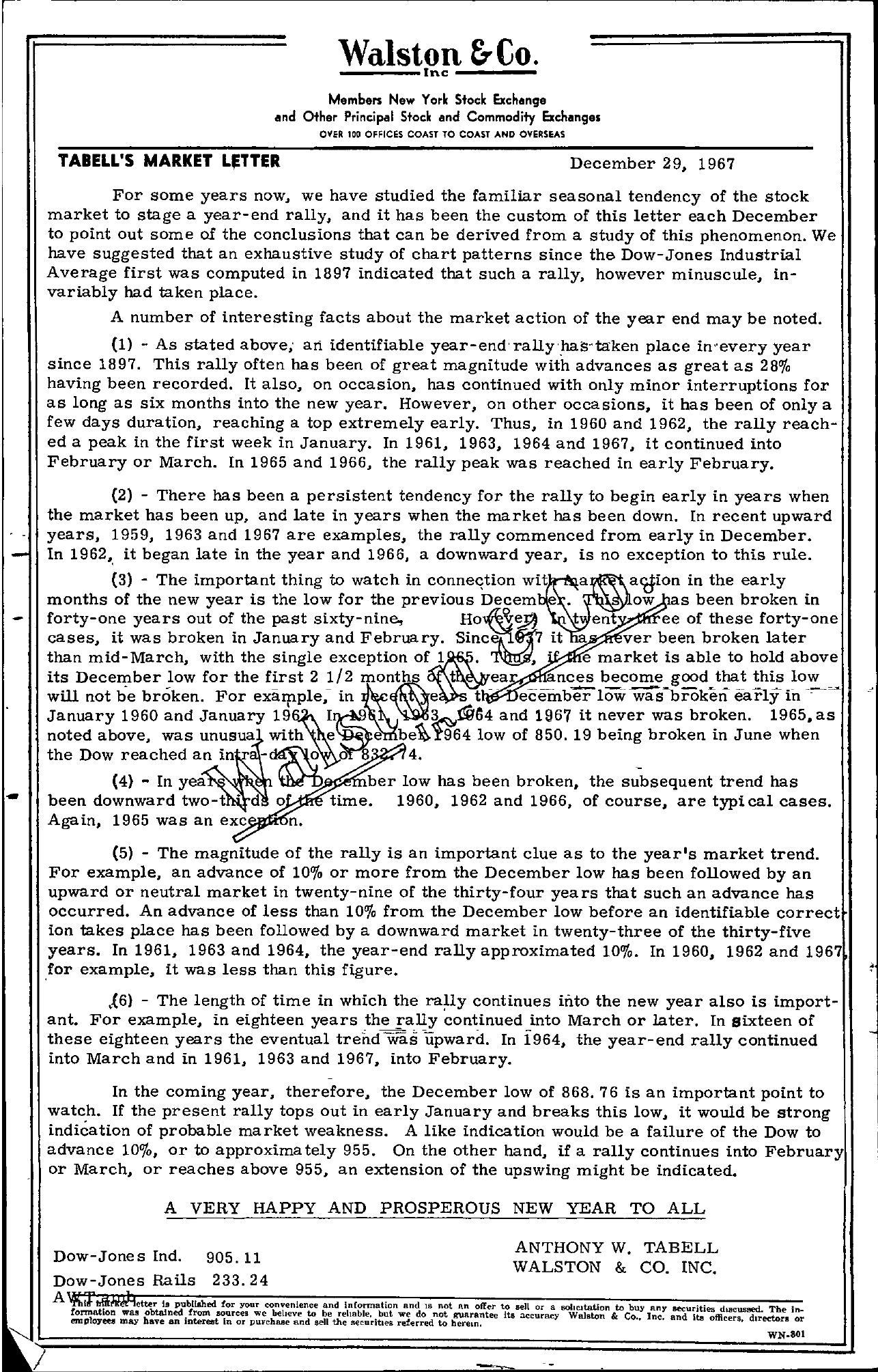 Walston &Co. …;..;..;;;.,,;,;.;; Inc Members New York Stock Exchange and Other Principal Stock and Commodity Exchange. OVER 100 OFFICES COAST TO COAST AND OVERSEAS TABELL'S MARKET LIETTER December 29, 1967 For some years now, we have studied the familiar seasonal tendency of the stock market to stage a year-end rally, and it has been the custom of this letter each December to point out some of the conclusions that can be derived from a study of this phenomenon. We have suggested that an exhaustive study of chart patterns since the Dow-Jones Industrial Average first was computed in 1897 indicated that such a rally, however minuscule, invariably had taken place. A number of interesting facts about the market action of the year end may be noted. (1) – As stated above; art identifiable year-end'rally'.haStaken place inevery year since 1897. This rally often has been of great magnitude with advances as great as 280/0 having been recorded. It also, on occasion, has continued with only minor interruptions for as long as six months into the new year. However, on other occasions, it has been of only a few days duration, reaching a top extremely early. Thus, in 1960 and 1962, the rally reached a peak in the first week in January. In 1961, 1963, 1964 and 1967, it continued into February or March. In 1965 and 1966, the rally peak was reached in early February. (2) – There has been a persistent tendency for the rally to begin early in years when the market has been up, and late in years when the market has been down. In recent upward years, 1959, 1963 and 1967 are examples, the rally commenced from early in December. In 1962 it began late in the year and 1966, a downward year, is no exception to this rule. (3) – The important thing to watch in conneqtion ajion in the early months of the new year is the low for the previous Decem e . ow as been broken in forty-one years out of the past sixty-nine, ent ee of these forty-one cases, it was broken in January and February. it ver been broken later than mid-March, with the single exception e market is able to hold above its December ow for the 2 1/2 will not be broken. For example, in t .ea e t ecember low was broken early In January 1960 and January 3 and 1967 it never was broken. 1965, as noted above, was unusua with e e low of 850. 19 being broken in June when the Dow reached an in (4) – In yea 0 4. l W-D ber low has been broken, the subsequent trend has been downward two-t . d 0 1960, 1962 and 1966, of course, are typical cases. Again, 1965 was an exc,…,….u (5) – The magnitude of the rally is an important clue as to the year's market trend. For example, an advance of 100/0 or more from the December low has been followed by an upward or neutral market in twenty-nine of the thirty-four years that such an advance has occurred. An advance of less than 100/0 from the December low before an identifiable co,rr'ectH ion takes place has been followed by a downward market in twenty-three of the thirty-five years. In 1961, 1963 and 1964, the year-end rally approximated 100/0. In 1960, 1962 and 1 for example, it was less than this figure. ,(6) – The length of time in which the rally continues into the new year also is import- wasant. For example, in eighteen years the !,ally continued into March or later. In sixteen of these eighteen years the eventual trend upward. In 1964, the year-end rally continued into March and in 1961, 1963 and 1967, into February. In the coming year, therefore, the December low of 868.76 is an important point to watch. If the present rally tops out in early January and breaks this low, it would be strong indication of probable market weakness. A like indication would be a failure of the Dow to advance 100/0, or to approxima tely 955. On the other hand, if a rally continues into Fhrlla'rvl or March, or reaches above 955, an extension of the upswing might be indicated. A VERY HAPPY AND PROSPEROUS NEW YEAR TO ALL 905.11 233.24 ANTHONY W. TABELL WALSTON & CO. INC. A VtffJiitJlfJ11etter is published for yOur convenience and information find 16 not nn offer to sell or a soIlcltation to buy Rny securities dISCUSsed. The infemorpmlOaYtieoe!n! mw.ao.y!! hoabvtaeinaend infrtoemrestsoiunrcoers J,wluel'chb8eJlIieevaendtosebllethreehsaebcleu.r.itbiuest rweeferdroedntoot hgeuraerma.ntee its accuracy Walston & Co., Inc. and Ita officers dlrectors or