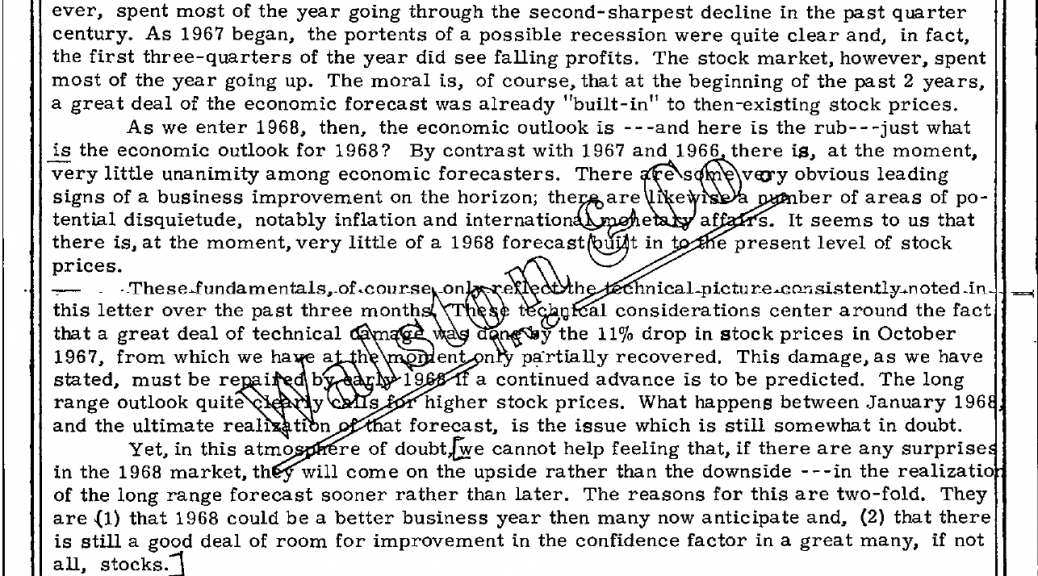 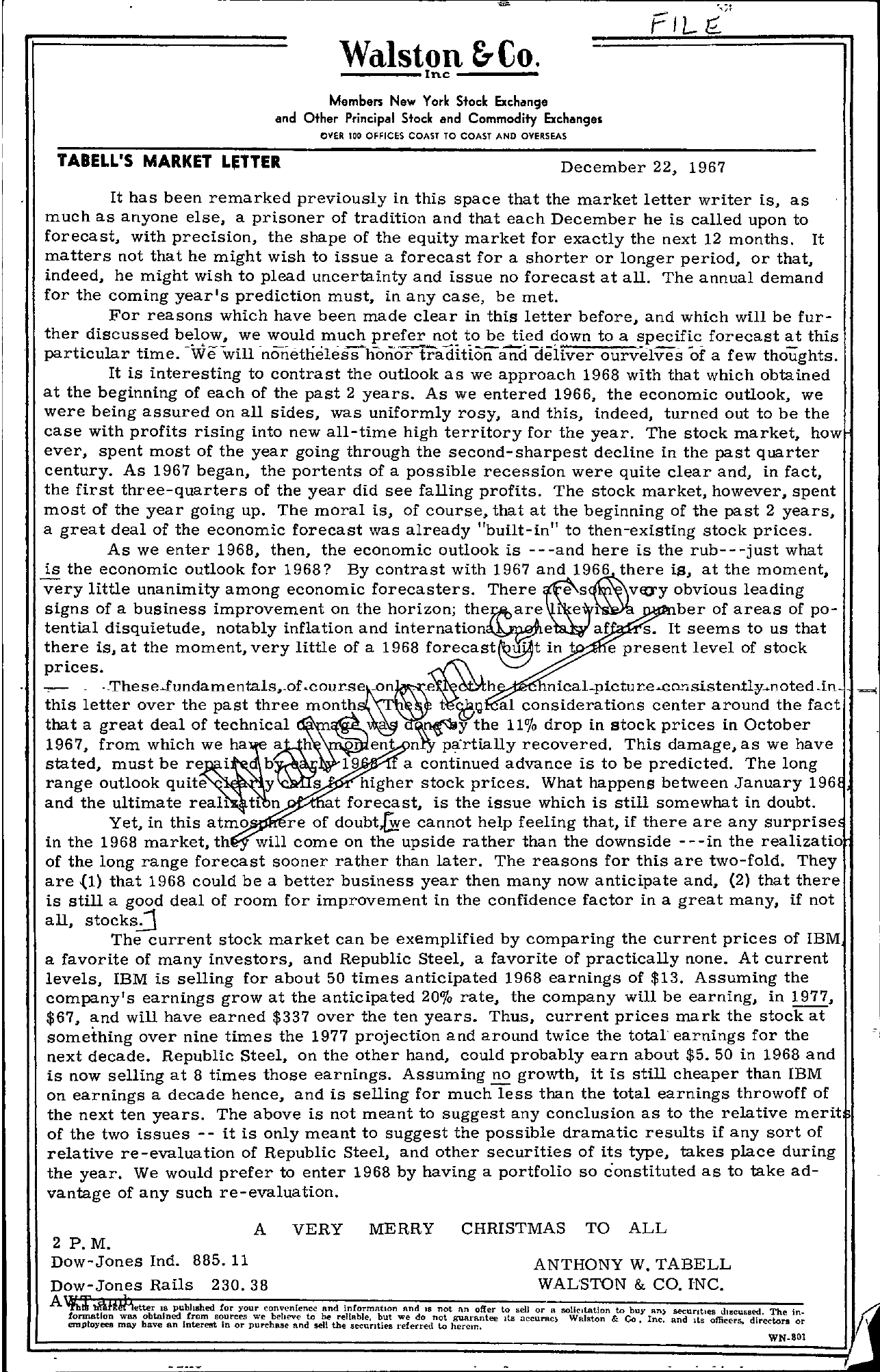 Walston &Co. —–Inc —– F I L dOl TABEll'S MARKET Members New York Stock Exchange and Other Principal Stock and Commodity Exchanges OVER 100 OFFICES COAST TO COAST AND OVERSEAS leTTER December 22, 1967 It has been remarked previously in this space that the market letter writer is, as much as anyone else, a prisoner of tradition and that each December he is called upon to forecast, with precision, the shape of the equity market for exactly the next 12 months. It matters not that he might wish to issue a forecast for a shorter or longer period, or that, indeed, he might wish to plead uncertainty and issue no forecast at all. The annual demand for the coming year's prediction must, in any case, be met. For reasons which have been made clear in this letter before, and which will be fur- ther discussed below, we would much prefer not to be tied down to a specific forecast at this ofparticular time. 'nonethelesshonor tradftfonanct-deiiver ourvelves a few thoughts. It is interesting to contrast the outlook as we approach 1968 with that which obtained at the beginning of each of the past 2 years. As we entered 1966, the economic outlook, we were being assured on all sides, was uniformly rosy, and this, indeed, turned out to be the case with profits rising into newall-time high territory for the year. The stock market, how ever, spent most of the year going through the second-sharpest decline in the past quarter century. As 1967 began, the portents of a possible recession were quite clear and, in fact, the first three-quarters of the year did see falling profits. The stock market, however, spent most of the year going up. The moral is, of course, that at the beginning of the past 2 years, a great deal of the economic forecast was already built-in to then-existing stock prices. As we enter 1968, then, the economic outlook is —and here is the rub—just what is the economic outlook for 1968 By contrast with 1967 and there is, at the moment, S)svery little unanimity among economic forecasters. There vf(J'y obvious leading signs of a business improvement on the horizon; the are 1 e 1 ber of areas of po- tential disquietude, notably inflation and af s. It seems to us that thre is, at the moment, very little of a 1968 in e present level of stock prices. -.- … this letter over the past three month that a great deal of technical \J 5 h t 1J al considerations center around the fact the 11 drop in stock prices in October 1967, from which we ha en partially recovered. This damage, as we have stated, must be re i b 19 a continued advance is to be predicted. The long range outlook quite y s higher stock prices. What happens between January 196 and the ultimate reah h n at forecast, is the issue which is still somewhat in doubt. Yet, in this atmo re of doubt,/Sye cannot help feeling that, if there are any surprise in the 1968 market, th will come on the upside rather than the downside —in the realizatio of the long range forecast sooner rather than later. The reasons for this are two-fold. They are I that 1968 could be a better business year then many now anticipate and, (2) that there is still a good deal of room for improvement in the confidence factor in a great many, if not all, stocks.J The current stock market can be exemplified by comparing the current prices of IBM a favorite of many investors, and Republic Steel, a favorite of practically none. At current levels, IBM is selling for about 50 times antiCipated 1968 earnings of 13. Assuming the company's earnings grow at the anticipated 20 rate, the company will be earning. in 1977, 67, and will have earned 337 over the ten years. Thus. current prices mark the stock at something over nine times the 1977 projection and around twice the total' earnings for the next decade. Republic Steel, on the other hand, could probably earn about 5. 50 in 1968 and is now selling at 8 times those earnings. Assuming growth, it is still cheaper than IBM on earnings a decade hence, and is selling for much less than the total earnings throwoff of the next ten years. The above is not meant to suggest any conclusion as to the relative merit of the two issues — it is only meant to suggest the possible dramatic results if any sort of relative re-evaluation of Republic Steel, and other securities of its type, takes place during the year. We would prefer to enter 1968 by having a portfolio so constituted as to take ad- vantage of any such re-evaluation. A 2 P. M. Dow-Jones Ind. 885. 11 VERY MERRY CHRISTMAS TO ALL ANTHONY W. TABELL Dow-Jones Rails 230.38 WAL'STON & CO. INC. AVK.'i';aUmetter IS pubhshed tor your l'onvenienci! and i'lformatlOn And IS not nn offer to sell or R soliCitation to buy an) securities dlll(!usBed. The inefomrDmloa)t,ieoens mWaa.y8 hoabvtaeinaend infrtearmetrtsoIunrcoers pwUFechbtLeSlieevaendtosebllethreehsaebCleU,rities rweeferdroedntoot hgeurRermlL.ntee Its aceUrRC) Walston & Co. Inc. and Its officers. directors or WNBOl 1A\