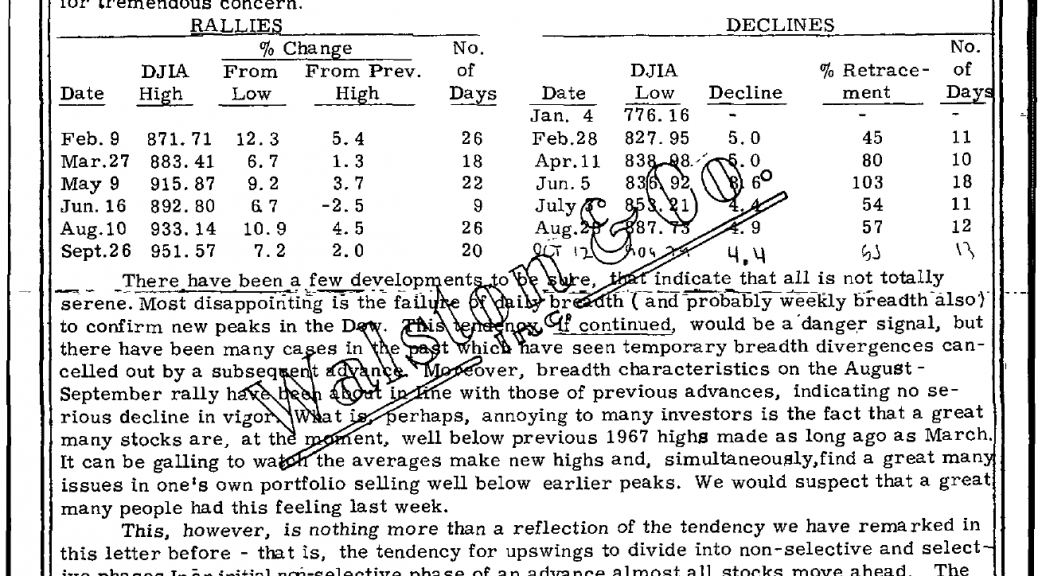 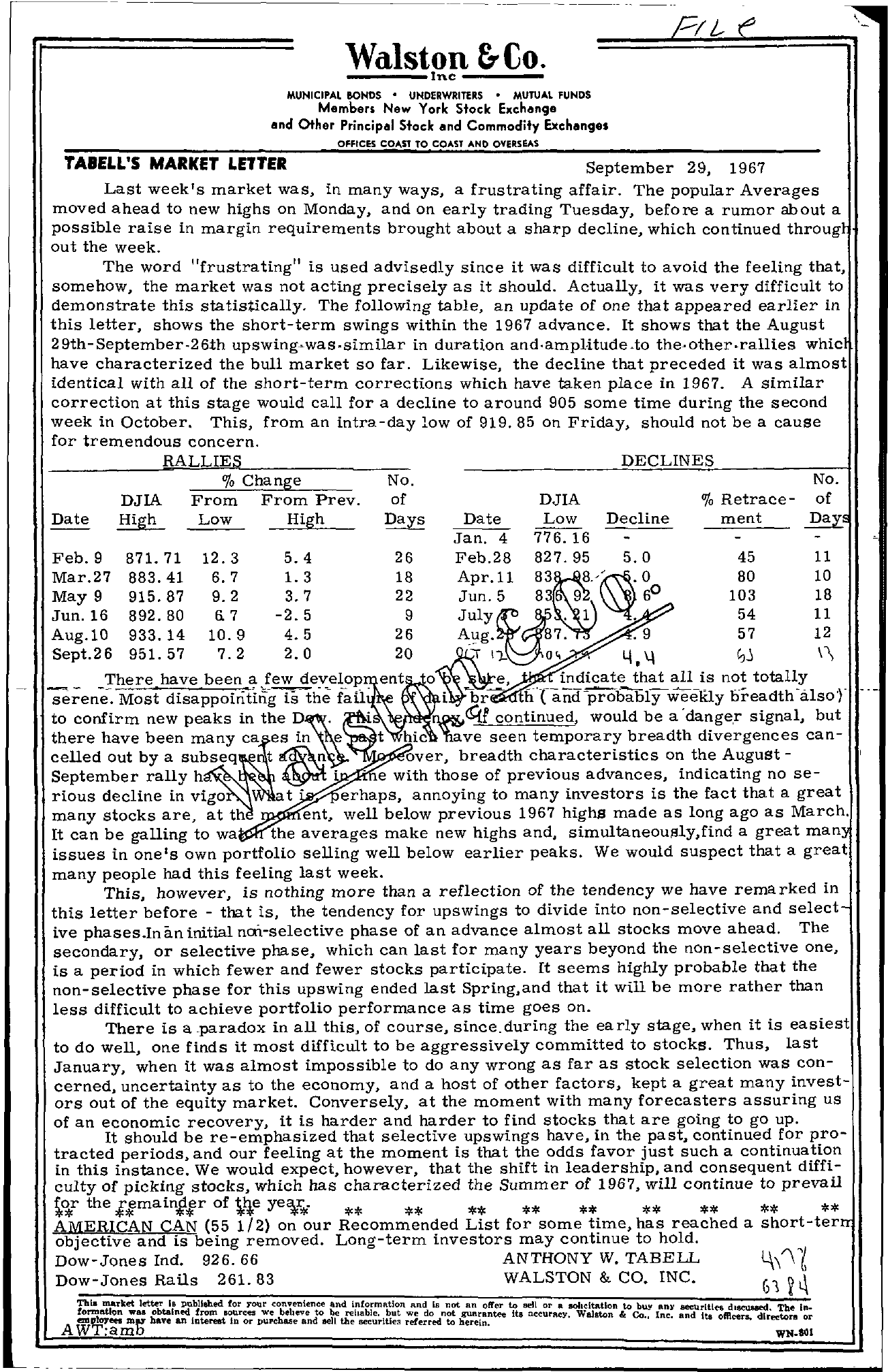 – – – – – – – – – – – – – – – – – – – — – – – – – – – – – – – – – Walston &Co. MUNICIPAL BON1lS UNDERWRITERS MUTUAL FUNDS Members New York Stock Exchange and Other Principal Stock and Commodity Exchan98s OFFICES COAST TO COAST ANO OVERSEAS TABELL'S MARKET LEtTER September 29, 1967 Last week's market was, in many ways, a frustrating affair. The popular Averages moved ahead to new highs on Monday, and on early trading Tuesday, before a rumor about a possible raise in margin requirements brought about a sharp decline, which continued throug out the week. The word frustrating is used advisedly since it was difficult to avoid the feeling that, somehow, the market was not acting precisely as it should. Actually, it was very difficult to demonstrate this statistically. The following table, an update of one that appeared earlier in this letter, shows the short-term swings within the 1967 advance. It shows that the August 29th-September-26th in duration and.ampl-itude.to the,other.rallies whic have characterized the bull market so far. Likewise, the decline that preceded it was almost identical with all of the short-term corrections which have taken place in 1967. A similar correction at this stage would call for a decline to around 905 some time during the second week in October. This, from an intra-day low of 919.85 on Friday, should not be a cause for tremendous concern. RALLIES Change DJlA From From Prevo No. of DJlA DECLINES No. Retrace- of Date High Low High Days Date Low Decline ment Jan. 4 776.16 Feb. 9 12.3 5.4 26 Feb.28 827. 95 5.0 45 11 Mar.27 6. 7 1.3 18 80 10 May 9 9.2 3. 7 22 103 18 Jun. 16 6.7 -2.5 9 54 11 Aug.10 Sept.26 10.9 7.2 4. 5 2.0 26 20 57 12 1\ to confirm new peaks in the there have been ca es in e celled out by a subseq t over, breadth characteristics on the August- September rally h . e with those of previous advances, indicating no se- rious decline in vigo t . erhaps, annoying to many investors is the fact that a great many stocks are, at th ent, well below previous 1967 highs made as long ago as March. It can be galling to wa the averages make new highs and, simultaneouiUy,find a great man issues in one's own portfolio selling well below earlier peaks. We would suspect that a great many people had this feeling last week. This, however, is nothing more than a reflection of the tendency we have remarked in this letter before – that is, the tendency for upswings to divide into non-selective and select ive phases.In an initial ncn-selective phase of an advance almost all stocks move ahead. The secondary, or selective phase, which can last for many years beyond the non-selective one, is a period in which fewer and fewer stocks participate. It seems highly probable that the non-selective phase for this upswing ended last Spring,and that it will be more rather than less difficult to achieve portfolio performance as time goes on. There is a paradox in all this, of course, since. during the early stage, when it is easiest to do well, one finds it most difficult to be aggressively committed to stocks. Thus, last January, when it was almost impossible to do any wrong as far as stock selection was con- cerned, uncertainty as to the economy, and a host of other factors, kept a great many investors out of the equity market. Conversely, at the moment with many forecasters assuring us of an economic recovery, it is harder and harder to find stocks that are going to go up. It should be re-emphaSized that selective upswings have, in the past, continued for pro- tracted periods, and our feeling at the moment is that the odds favor just such a continuation in this instance. We would expect, however, that the shift in leadership,and consequent diffi- culty of picking stocks, which has characterized the Summer of 1967, will continue to prevail the I,fmain,j,!,fr of AMERICAN CAN (55 1/2) on our Recommended List for some time, has reached a short-ter objective and is being removed. Long-term investors may continue to hold. Dow-Jones Ind. 926.66 Dow-Jones Rails 261. 83 ANTHONY W. TABELL WALSTON & CO. INC. G\ This itaeme m..rk ,ees et le mW8.1.1, tter IB llubll8hed for yo hoabvtaeinaend infrtoemrestlIOinurcoers ur convenience and Information Rnd III no pwurechbaeslieevaendtosebllethreelisaebcleu,rithieust rweeferdroedntoot t an oller hgeureair.anntee tiotasealcl courra a cy a . ohdtatlon Wa1Bton t & o Cbou.y any ,In.c &eetl a nd It! d 8CI1ssed Th I e&0fRcIera. dlr'eetoen on-r A WTamO . WHoSO!