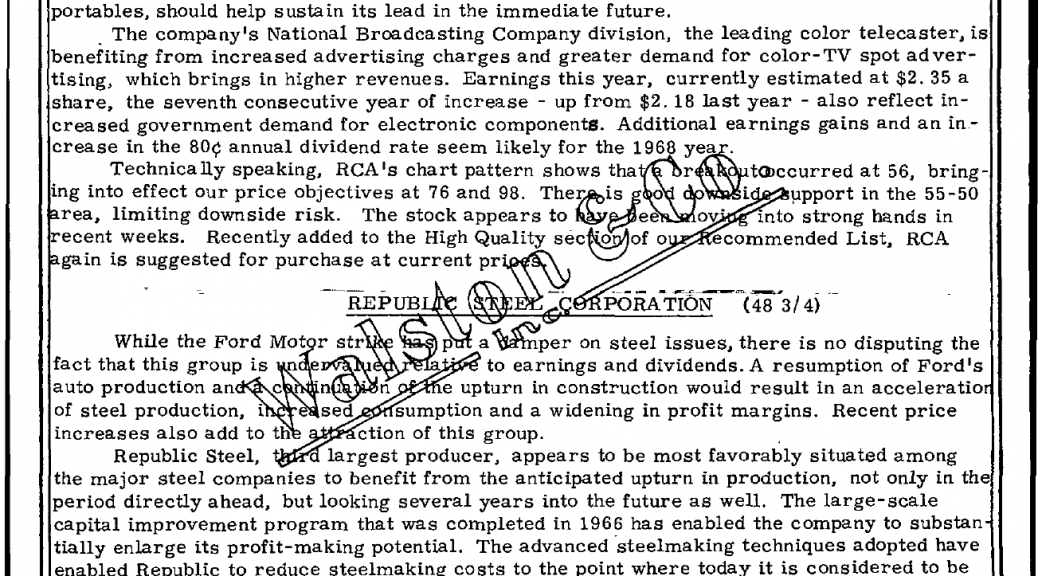 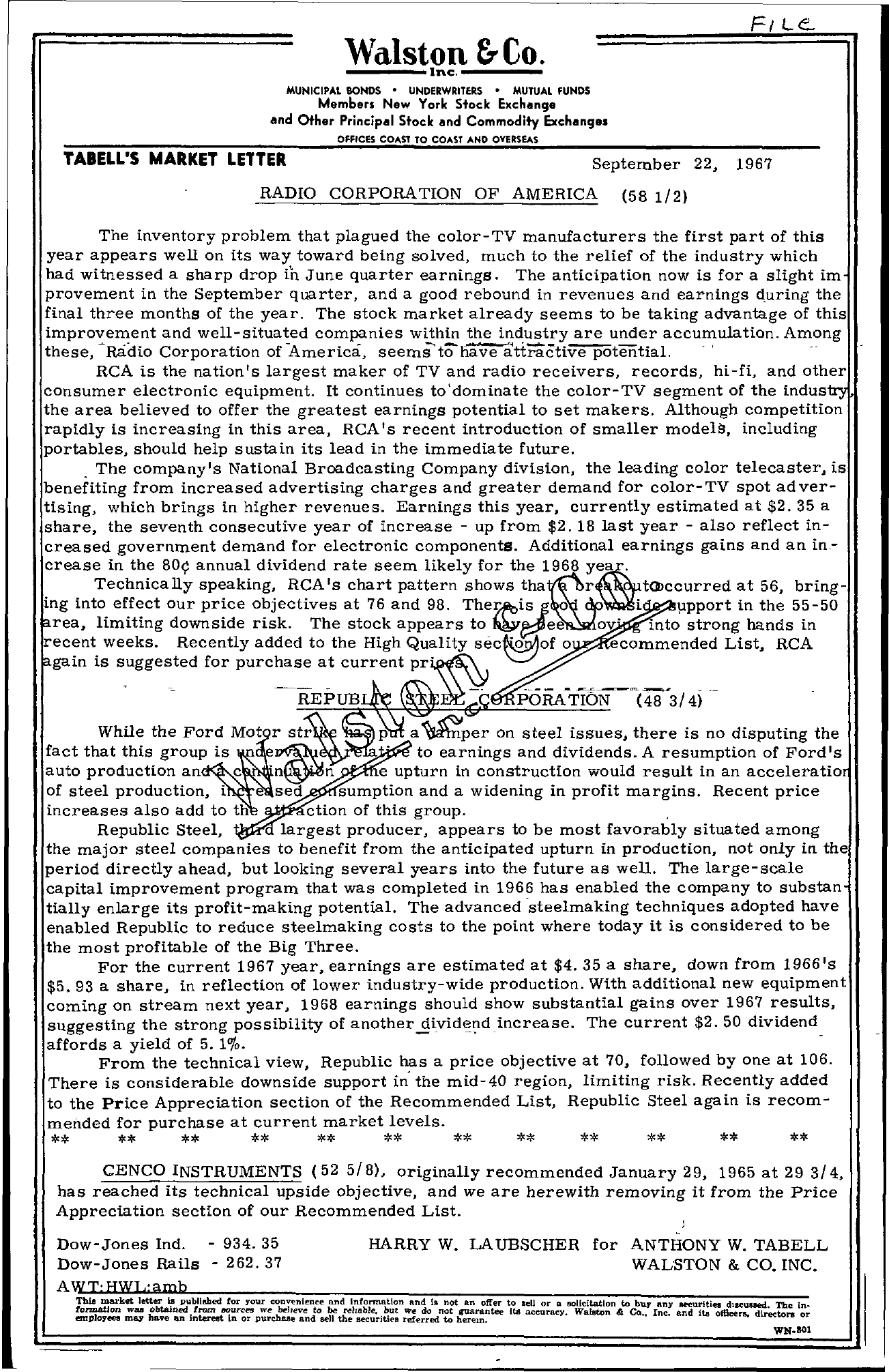 W—a-l-sltnonc.&– -C-o-. MUNICIPAL BONOS UNDERWRITERS MUTUAL FUNDS Members New York Stock Exchange and Other Principal Stock and Commodity Exchange. TABELL'S MARKET LETTER OfFICES COAST TO COAST AND OVERSEAs September 22, RADIO CORPORATION OF AMERICA (581/2) FI U 1967 The inventory problem that plagued the color-TV manufacturers the first part of this year appears well On its way toward being solved, much to the relief of the industry which had witnessed a sharp drop in June quarter earnings. The anticipation now is for a slight im provement in the September quarter, and a good rebound in revenues and earnings during the final three months of the year. The stock market already seems to be taking advantage of this improvement and well-situated companies within the industry are under accumulation. Among these, 'Ridio Corporation of America, seems'tonave attractivepotential. . RCA is the nation I S largest maker of TV and radio receivers, records, hi-fi, and other consumer electronic equipment. It continues to'dominate the color-TV segment of the indus the area believed to offer the greatest earnings potential to set makers. Although competition rapidly is increasing in this area, RCA I S recent introduction of smaller models, including portables, should help sustain its lead in the immediate future . . The company's National Broadcasting Company division, the leading color telecaster, is benefiting from increased advertising charges and greater demand for color-TV spot adver- tiSing, which brings in higher revenues. Earnings this year, currently estimated at 2. 35 a share, the seventh consecutive year of increase – up from 2. 18 last year – also reflect in- creased government demand for electronic components. Additional earnings gains and an crease in the 80 annual dividend rate seem likely for the 1968 . Technically speaking, RCA's chart pattern shows tha ing into. ef.fct our ojectives at 76 and 98. .r tQlccurred at 56, bringi 1lPport in the 55-50 rea, hmitlng downside risk. The stock appears to mto strong hands in recent weeks. Recently added to the High Quality secof 0 ecommended List, RCA gain is s.uggested for purcha;Ea;rrent PORA-TrON-(4'83/ 4)- Recent price ction of this group. . Republic Steel, largest producer, appears to be most favorably situated among the major steel companies to benefit from the anticipated upturn in production, not only in the period directly ahead, but looking several years into the future as well. The large-scale capital improvement program that was completed in 1966 has enabled the company to substan tially enlarge its profit-making potential. The advanced techniques adopted have enabled Republic to reduce steelmaking costs to the pOint where today it is considered to be the most profitable of the Big Three. For the current 1967 year, earnings are estimated at 4.35 a share, down from 1966's 5.93 a share, in reflection of lower industry-wide production. With additional new equipment coming on stream next year, 1968 earnings should show substantial gains over 1967 results, suggesting the strong possibility of another increase. The current 2.50 dividend affords a yield of 5. 10/0. From the technical view, Republic has a price objective at 70, followed by one at 106. There is considerable downside support in the mid-40 region, limiting risk. Recently added to the Price Appreciation section of the Recommended List, Republic Steel again is recom- mended for purchase at current market levels. CENCO INSTRUMENTS (52 5/8), originally recommended January 29, 1965 at 29 3/4, has reached its technical upside objective, and we are herewith removing it from the Price Appreciation section of our Recommended List. Dow-Jones Ind. – 934. 35 c HARRY W. LAUBSCHER for ANTHONY W. TABELL Dow-Jones Rails – 262.37 WALSTON & CO. INC. AWT'HWL'amb Tble mBl'ket letter ill pubUBhed for your and information Rnd Is not an offer to sell or a solicitation to buy any securities dlUuued. The In. efmorjJmloaFtieoene mWaaJyI hoabvtaeJnI!e.nd inIrteormestaoiunrcoers pwUFe ehbaesleievaendtosebllethreelisaebcluer, ltu'lI rWefef'rdroedntoot hgeuraerma.ntee Its accuracy. Walston & Co Inc. and its officer&. direeton or