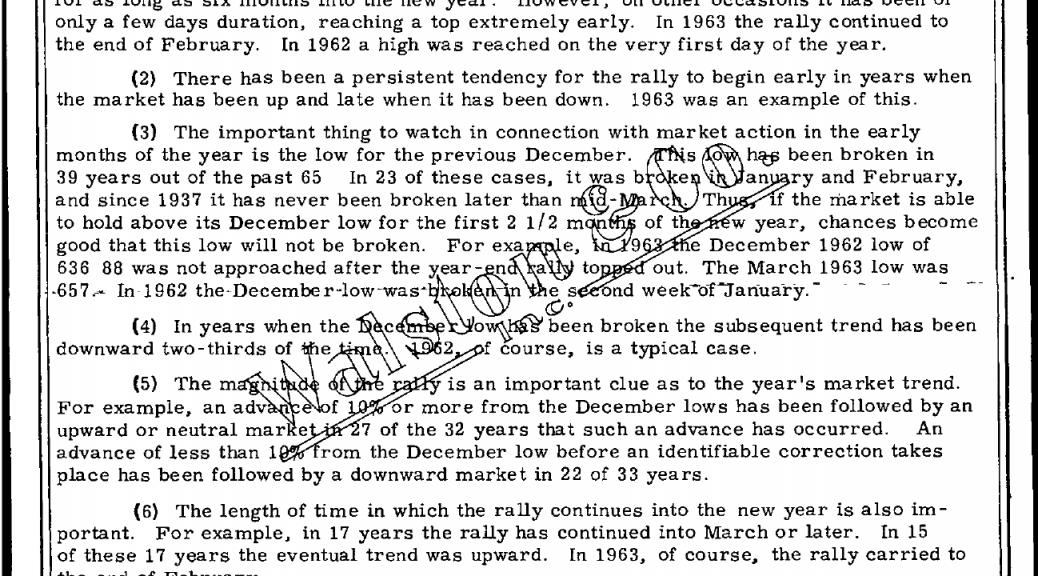 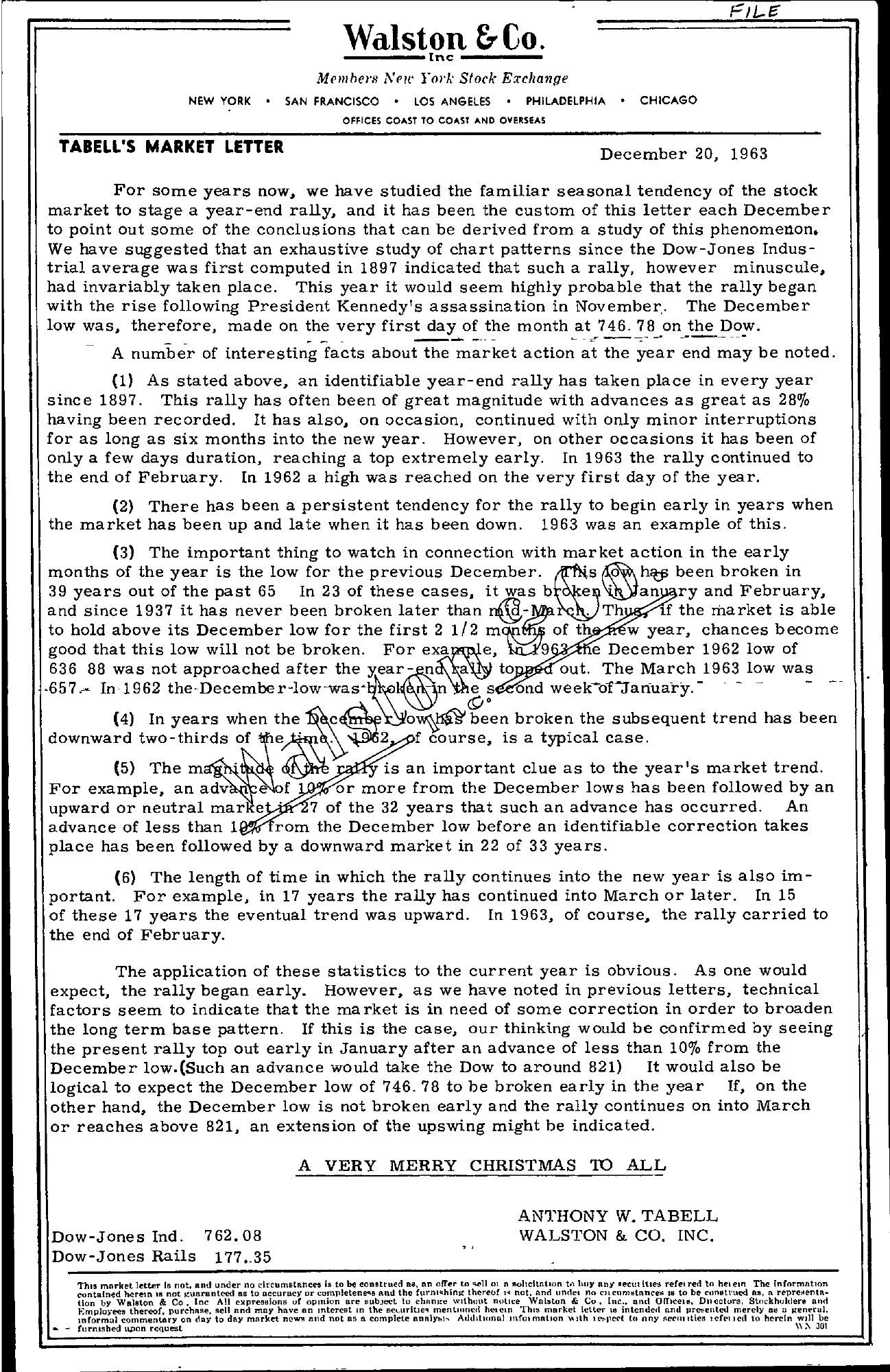 Walston &Co. Memher,. ,\'en' l'Ol'k Stock Ecrcilange NEW YORK SAN FRANCISCO LOS ANGELES PHILADELPHIA CHICAGO OFHCES COAST TO COAST AND OVERSEAS TABELL'S MARKET LETTER December 20, 1963 For some years now, we have studied the familiar seasonal tendency of the stock market to stage a year-end rally, and it has been the custom of this letter each December to pOint out some of the conclusions that can be derived from a study of this phenomenon. We have suggested that an exhaustive study of chart patterns since the Dow-Jones Indus- trial average was first computed in 1897 indicated that such a rally, however minuscule, had invariably taken place, This year it would seem highly probable that the rally began with the rise following President Kennedy's assassination in November,. The December — —- —low was, therefore, made on the very firs-t da-y of the – month at – 746.78 on —–;..- the Dow. A number of interesting facts about the market action at the year end may be noted, (1) As stated above, an identifiable year-end rally has taken place in every year since 1897. This rally has often been of great magnitude with advances as great as 280/. having been recorded. It has also, on occasion, continued with only minor interruptions for as long as six months into the new year. However, on other occasions it has been of only a few days duration, reaching a top extremely early. In 1963 the rally continued to the end of February. In 1962 a high was reached on the very first day of the year. (2) There has been a persistent tendency for the rally to begin early in years when the market has been up and late when it has been down. 1963 was an example of this. (3) The important thing to watch in connection with market action in the early Smonths of the year is the low for the previous December, been broken in 39 years out of the past 65 In 23 of these cases, it was b e \Q0tan ry and February, and since 1937 it has never been broken later than . Th if the market is able to hold above its December low for the first 2 1/2 m of th w year, chances become good that this low will not be broken. For 9 e December 1962 low of 636 88 was not approached after the a to out. The March 1963 low was In 1962 -n !eyos ond week-6fJanuary.- (4) In years when the been broken the subsequent trend has been downward two-thirds of f course, is a typical case. (5) The m . is an important clue as to the year's market trend. For example, an adv f or more from the December lows has been followed by an upward or neutral mar of the 32 years that such an advance has occurred. An advance of less than 1 rom the December low before an identifiable correction takes place has been followed by a downward market in 22 of 33 years. (6) The length of time in which the rally continues into the new year is also important. For example, in 17 years the rally has continued into March or later. In 15 of these 17 years the eventual trend was upward, In 1963, of course, the rally carried to the end of February. The application of these statistics to the current year is obvious. As one would expect, the rally began early. However, as we have noted in previous letters, technical factors seem to indicate that the rna rket is in need of some correction in order to broaden the long term base pattern. If this is the case, our thinki.ng would be confirmed by seeing the present rally top out early in January after an advance of less than 100/0 from the December low.(Such an advance would take the Dow to around 821) It would also be logical to expect the December low of 746.78 to be broken early in the year If, on the other hand, the December low is not broken early and the rally continues on into March or reaches above 821, an extension of the upswing might be indicated, A VERY MERRY CHRISTMAS 'ID ALL Dow-Jones Ind. 762.08 Dow-Jones Rails 177 . 35 ANTHONY W. TABELL WALSTON & CO. INC. ThiS mnrket letter s not. and under no circumstances s to be construed as. nn ofTer to 'ell 0\ n lIohcltntlOn tn huy any Aecm hies refel red to helel The information urcontained herem IS not j.Cuaranteed as to nccurucy or completene'ls and the (\ll'm,hlnll thereof 1-1 not. nnd IIndel no CJlClIffi!ltnn('cll II, to he ('unstl'ued as, n reprellenta- tlon by Walston & Co, Inc All expressions opmion are subject to ('hnn)!e wlthullt notice Wnbston & Co. Ine IlIU\ Offlcels, Dnccturs, Stockholders and thereof, purchase, sellnnd mny have an IntereAt In the mentum!,'l\ helcln ThiS market letter 1 intended anti lJrC!entcd merely ns a Ienerui, Informal commentary on riny to day market neW!! and not as a complete anniYbh Atldlttunni I1lfOlmntlOn th 1'''lle('t tu on), Ie('llllties lef('lled to herein WIll be … – furnished lIl)on request 301