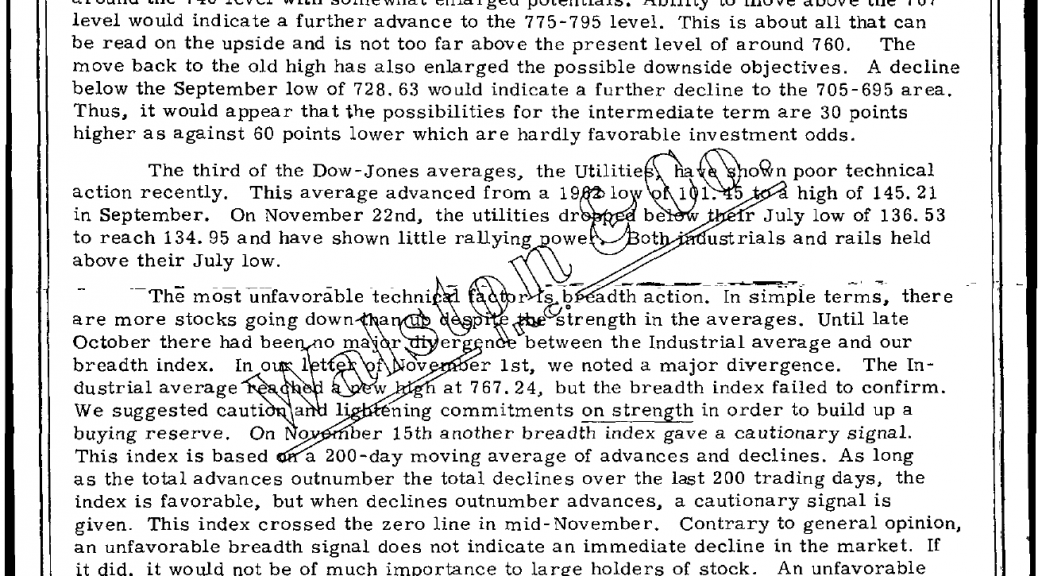 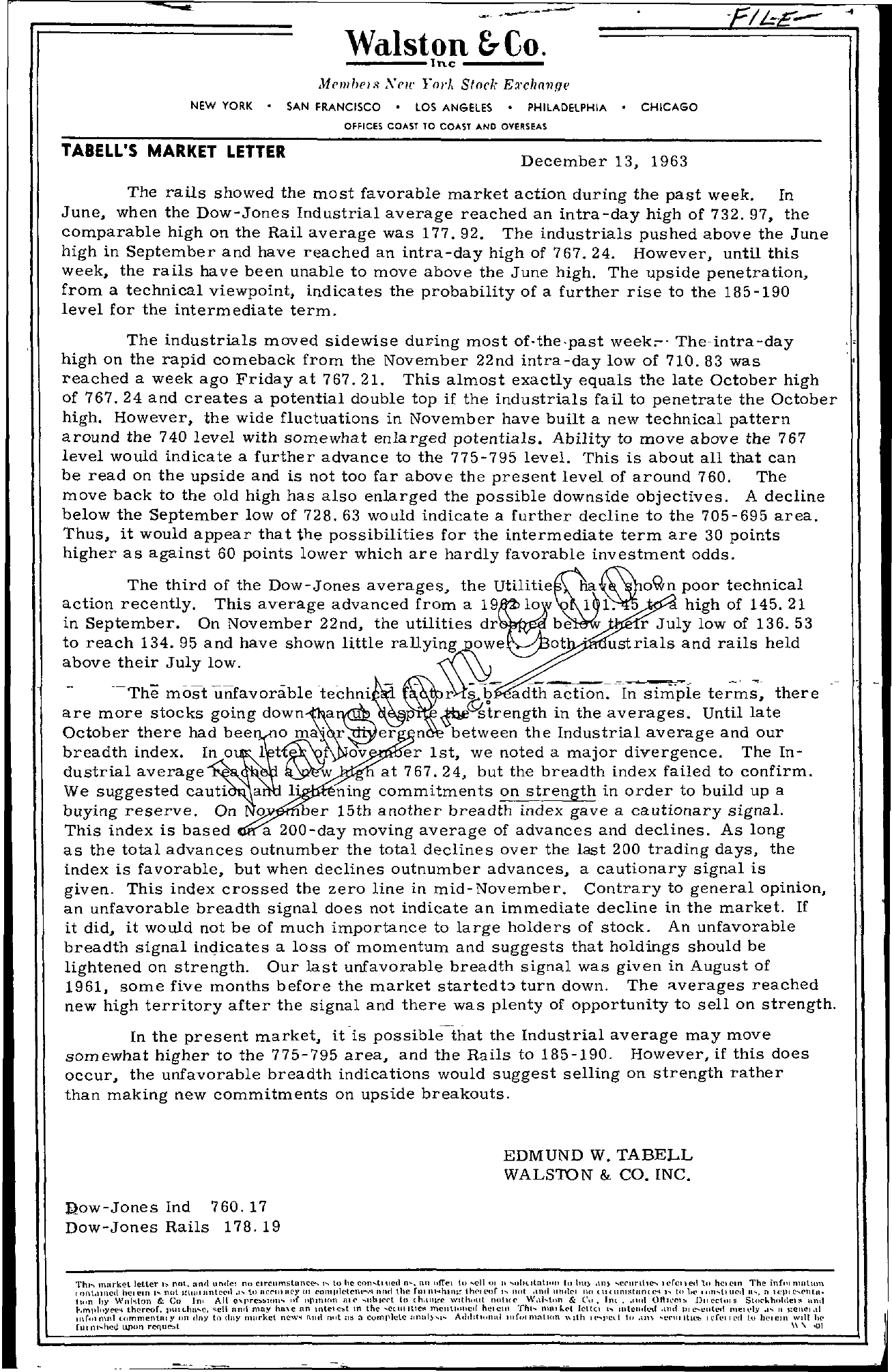 …—– Walston &Co. —–Inc —– Membel . Xell' rnd Stnck Echonge NEW YORK SAN FRANCISCO LOS ANGELES PHILADELPHIA CHICAGO OFFICES COAST TO COAST AND OVERSEAS TABELL'S MARKET LETTER December 13, 1963 The rails showed the most favorable market action during the past week. In June, when the Dow-Jones Industrial average reached an intra-day high of 732. 97, the comparable high on the Rail average was 177.92. The industrials pushed above the June high in September and have reached an intra-day high of 767.24. However, until this week, the rails have been unable to move above the June high. The upside penetration, from a technical viewpoint, indicates the probability of a further rise to the 185-190 level for the intermediate term. The industrials moved sidewise dUI'ing most ofthe.past week;– The-intra-day .' high on the rapid comeback from the November 22nd intra-day low of 710.83 was reached a week ago Friday at 767.21. This almost exactly equals the late October high of 767.24 and creates a potential double top if the industrials fail to penetrate the October high. However, the wide fluctuations in November have built a new technical pattern around the 740 level with somewhat enlarged potentials. Ability to move above the 767 level would indicate a further advance to the 775-795 level. This is about all that can be read on the upside and is not too far above the present level of around 760. The move back to the old high has also enlarged the possible downside objectives. A decline below the September low of 728. 63 would indicate a further decline to the 705-695 area. Thus, it would appear that the possibilities for the intermediate term are 30 points higher as against 60 points lower which are hardly favorable investment odds. The third of the Dow-Jones averages, the action recently. This average advanced from a in September. On November 22nd, the utilities dr to reach 134.95 and have shown little owe above their July low. 1 be ot poor technical high of 145.21 r July low of 136.53 ustrials and rails held –The most ulifavorabletechniba ad-fh action. In simple there – are more stocks going strength in the averages. Until late October there had bee 0 rna' n between the Industrial average and our breadth index. In 0 I over 1st, we noted a major divergence. The In- dustrial average at 767.24, but the breadth index failed to confirm. We suggested cauti l' ning commitments on strength in order to build up a buying reserve. On ber 15th another breadth index gave a cautionary signal. This index is based a 200-day moving average of advances and declines. As long as the total advances outnumber the total declines over the last 200 trading days, the index is favorable, but when declines outnumber advances, a cautionary signal is given This index crossed the zero line in mid-November. Contrary to general opinion, an unfavorable breadth signal does not indicate an immediate decline in the market. If it did, it would not be of much importance to large holders of stock. An unfavorable breadth signal indicates a loss of momentum and suggests that holdings should be lightened on strength. Our last unfavorable breadth signal was given in August of 1961, some five months before the market started b turn down. The averages reached new high territory after the signal and there was plenty of opportunity to sell on strength. In the present market, it is possible that the Industrial average may move somewhat higher to the 775-795 area, and the Rails to 185-190. However, if this does occur, the unfavorable breadth indications would suggest selling on strength rather than making new commitments on upside breakouts. Dow-Jones Ind 760.17 Dow-Jones Rails 178.19 EDMUND W. TABELL WALSTON & CO. INC. Thh market letter b not. anl\ un!!c! no I' 10 he con …h tied n…. nn frel In cn nI 10 .,,,lllllatl,,n tn Inl ,Ill c(untle… IefCl1 e,1 ttl hCI Cln The inflllllltwn ,on\,l1nclI hClem I nul tn llc(lIlury O! nnd thc fUll\l .. Ih(,lenf I' 1101 .1n,llIllIlcl n(( to u…, ,on..,\luc,lll', n le)llc'(lllu IIn hy \\'nl'l\on & Co In, All (If (1\\1111011 111(' -.uhlc't t(l (h.III!.!C WltllPUt nliI((' \\',\i-.t(lll & ell, lilt, ,11((1 DllcctUis StO(kh()I,lel !l1l,1 thcrrof, IlU!(,ha'c. e!! nnr! mny flu'\c nn wlelct w the -.e(Ullt1CI rnenuc,1 helcw 'Chi tllUlf..('( IcH(1 I., lutcn,lc'if ,1Ild IIIC-,cII\(',I n I!CllCI,1I IlIrHltl\1I1 u,rnmentlilY (In !lilY to IIny nwrkcl IHIII n(lt WI n complete A,j,ht,nnl !!If, nmllOn '\llh 1('-.pc,1 III .un 'CrlU lCrCllCII to helcllI wI\l11' fill nl-.hcu ll,pon requell \\ '\ ,Ul