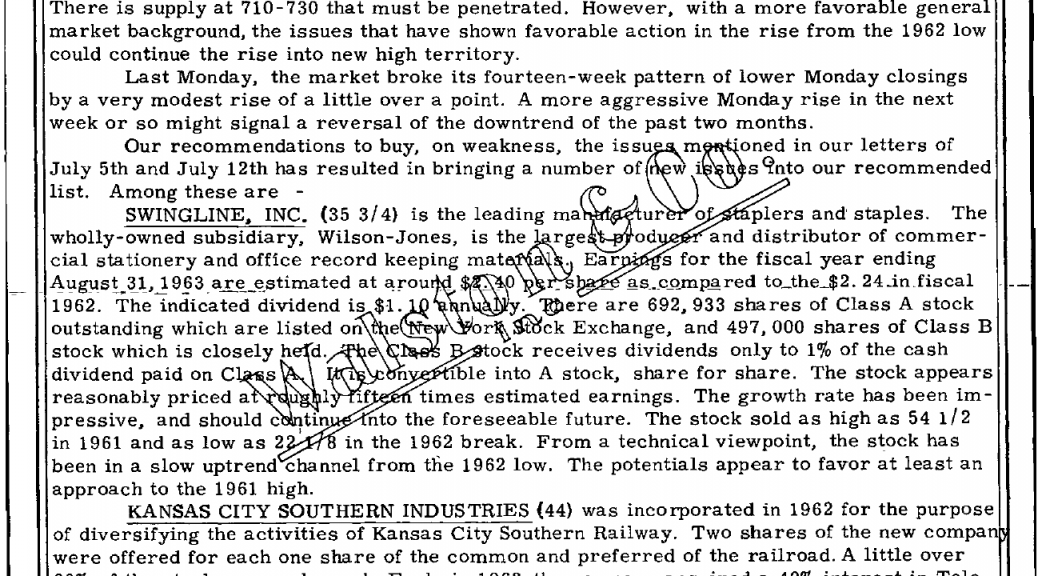 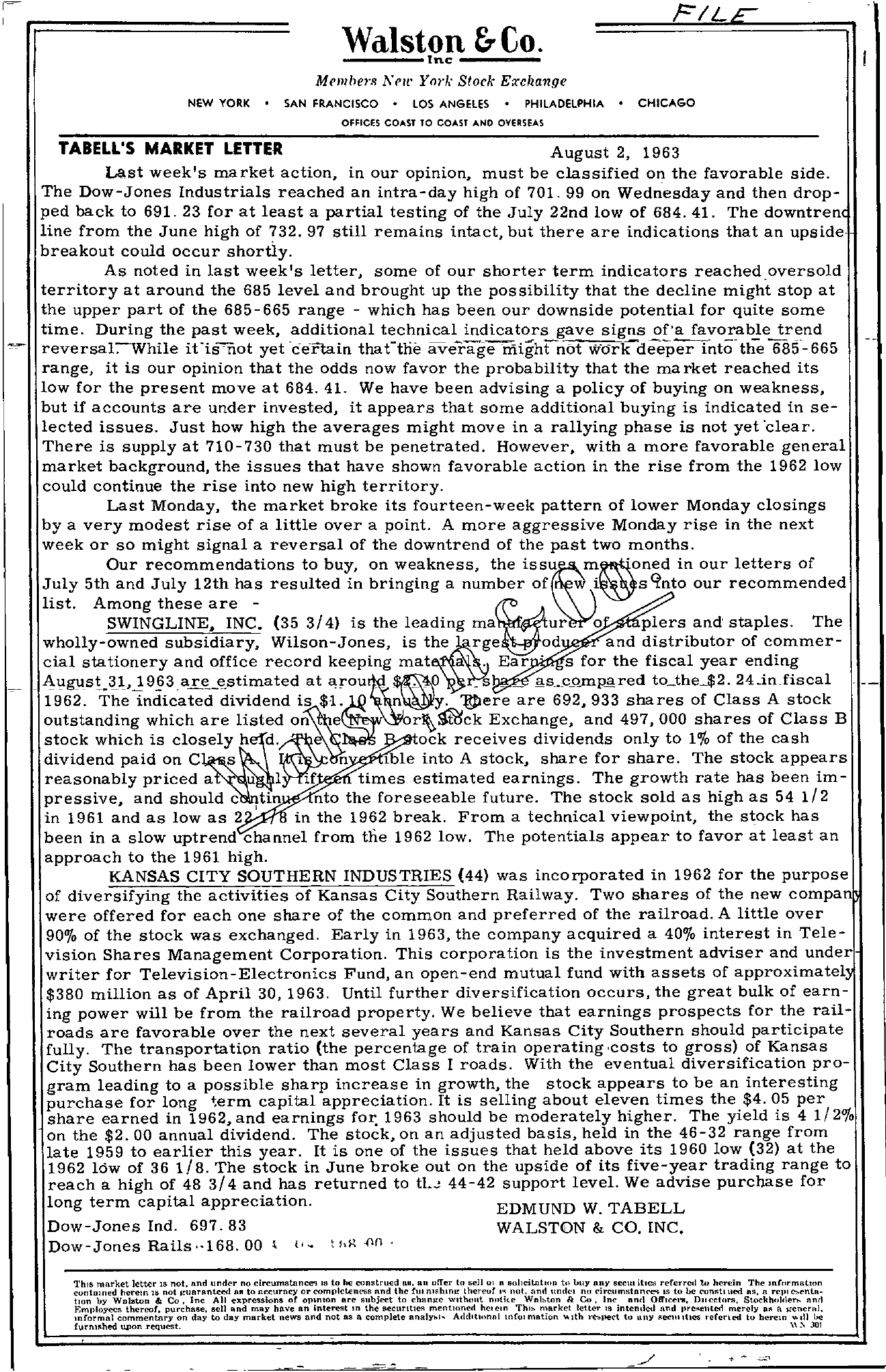 Walston &Co. Inc – – – – – f'IL Mrmle,. Sell' Yo', Stock Exchange NEW YORK SAN FRANCISCO LOS ANGELES PHILADELPHIA CHICAGO OfFices COA.ST TO COAST AND OVERSEAS TABELL'S MARKET LETTER August 2, 1963 Last week's market action, in our OplnlOn, must be classified on the favorable side. The Dow-Jones Industrials reached an intra-day high of 701. 99 on Wedu'esdayand then dropped back to 691. 23 for at least a partial testing of the July 22nd low of 684.41. The downtren line from the June high of 732.97 still remains intact, but there are indications that an upside breakout could occur shortly. As noted in last week's letter, some of our shorter term indicators reachedoversold territory at around the 685 level and brought up the possibility that the decline might stop at the upper part of the 685-665 range – which has been our downside potential for quite some time. During the past week, additional technical indicators gave signs of'a favorable trend reversal-While yet 'certain that-Uie averagenlight not work deeper into'the 685c 665 range, it is our opinion that the odds now favor the probability that the market reached its low for the present move at 684.41. We have been advising a policy of buying on weakness, but if accounts are under invested, it appears that some additional buying is indicated in selected issues. Just how high the averages might move in a rallying phase is not yet clear. There is supply at 710-730 that must be penetrated. However, with a more favorable general market background, the issues that have shown favorable action in the rise from the 1962 low could continue the rise into new high territory. Last Monday, the market broke its fourteen-week pattern of lower Monday closings by a very modest rise of a little over a point. A more aggressive Monday rise in the next week or so might signal a reversal of the downtrend of the past two months. Our recommendations to buy, on weakness, the in our letters of July 5th and July 12th has resulted in bringing a number of w our recommended mlist. Among these are – SWINGLINE. INC. (35 3/4) is the leading ma ur 0 pIers and' staples. The wholly-owned subsidiary, Wilson-Jones, is rge od and distributor of commer- cial stationery and office record keeping mat a . Ear' s for the fiscal year ending ,AugusL3.1,19!i3ax.e.e,stimated at .. . s ,s.,cQmpll,red tothe2. 24.in.fiscal – 1962. The indicated dividend is li 'l!tIere are 692,933 shares of Class A stock outstanding which are listed Exchange, and 497,000 shares of Class B stock which is closely h ock receives dividends only to 1/0 of the cash dividend paid on C S I n Ible into A stock, share for share. The stock appears reasonably priced a u 1 If times estimated earnings. The growth rate has been im- pressive, and should c ,tin nto the foreseeable future. The stock sold as high as 54 l/ 2 in 1961 and as low as 2 in the 1962 break. From a technical viewpoint, the stock has been in a slow uptrend channel from the 1962 low. The potentials appear to favor at least an approach to the 1961 high. KANSAS CITY SOUTHERN INDUSTRIES (44) was incorporated in 1962 for the purpose of diversifying the activities of Kansas City Southern Railway. Two shares of the new compa were offered for each one share of the common and preferred of the railroad. A little over 90 of the stock was exchanged. Early in 1963, the company acquired a 40 interest in Tele- vision Shares Management Corporation. This corporation is the investment adviser and under writer for Television-Electronics Fund, an open-end mutual fund with assets of approximatel 380 million as of April 30,1963. Until further diversification occurs, the great bulk of earn- ing power will be from the railroad property. We believe that earnings prospects for the rail- roads are favorable over the next several years and Kansas City Southern should participate fully. The transportation ratio (the percentage of train operating costs to gross) of Kansas City Southern has been lower than most Class I roads. With the eventual diversification pro- gram leading to a possible sharp increase in growth, the stock appears to be an interesting purchase for long capital appreciation. It is selling about eleven times the 4.05 per share earned in 1962,and earnings for 1963 should be moderately higher. The yield is 4 1/2 – on the 2.00 annual dividend. The stock, on an adjusted basis, held in the 46-32 range from late 1959 to earlier this year. It is one of the issues that held above its 1960 low (32) at the 1962 low of 36 1/8. The stock in June broke out on the upside of its five-year trading range to reach a high of 48 3/4 and has returned to 44-42 support level. We advise purchase for long term capital appreciation. EDMUND W. TABELL Dow-Jones Ind. 697.83 Dow-Jones Rails–168. 00, ,,- thl '10 WALST0N & CO. INC. ThIS mnrket letter IS not. and under no circumstancC'I IS to he construed ns, an offer to sell 01 fl sohcitntton ttl buy any seelll itlcs referred to herein The m(rmnlmn contmned herem IS not I!unrant.eed lUI to Ilcl;urncy or completeness nnd the fUi nlshtnlt thereor . not. nnd \tndcl nu circumstnnC'; IS to be cun,;h ued as, n rCI'1 Clent.n- t10n by Wliiston &. Co, Inc All expressions of oPlnlon are subject to chRnlle wlthuut nutke Wnbton & Co, Inc IIm\ Offlcel's, DllcctOrs, Stockholdcr.. Ilnd thereof, purchase, sell and may hnve an interest In the seCllritiefl mentIOned hCI Cln 'fhl! market lettC'r 18 intended and IIreo.cllted merely 111; It \.lenernl. Informal commentary on day to day market news nnd not IlS a complete nnalYhl-. Adtlitlnnni Infol mation …. Ith rcollect to uny RecUlltJes rdcrled to herem ,11 be furlllllhed. u,pon request. \\.\ 301