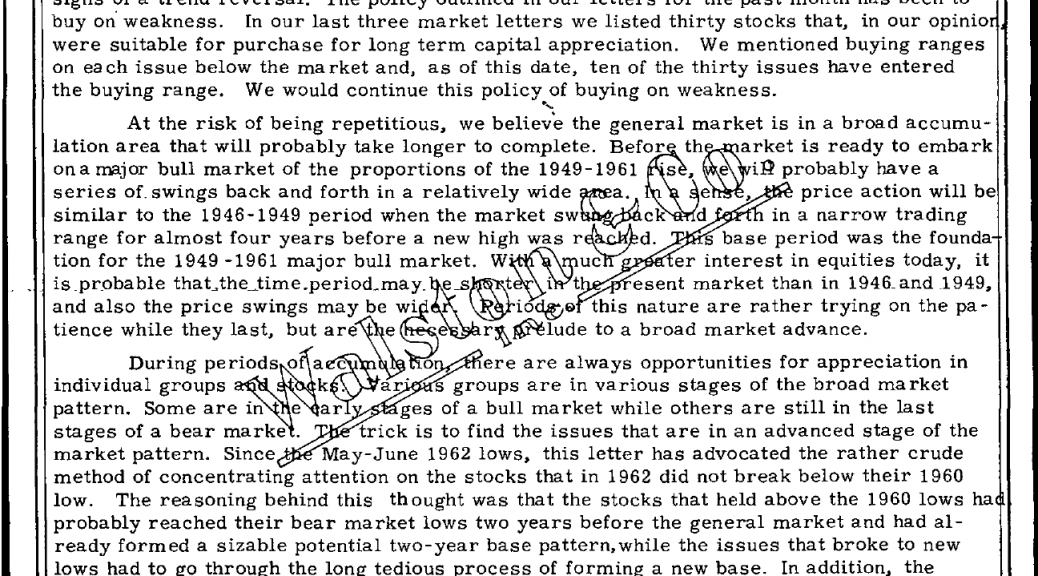 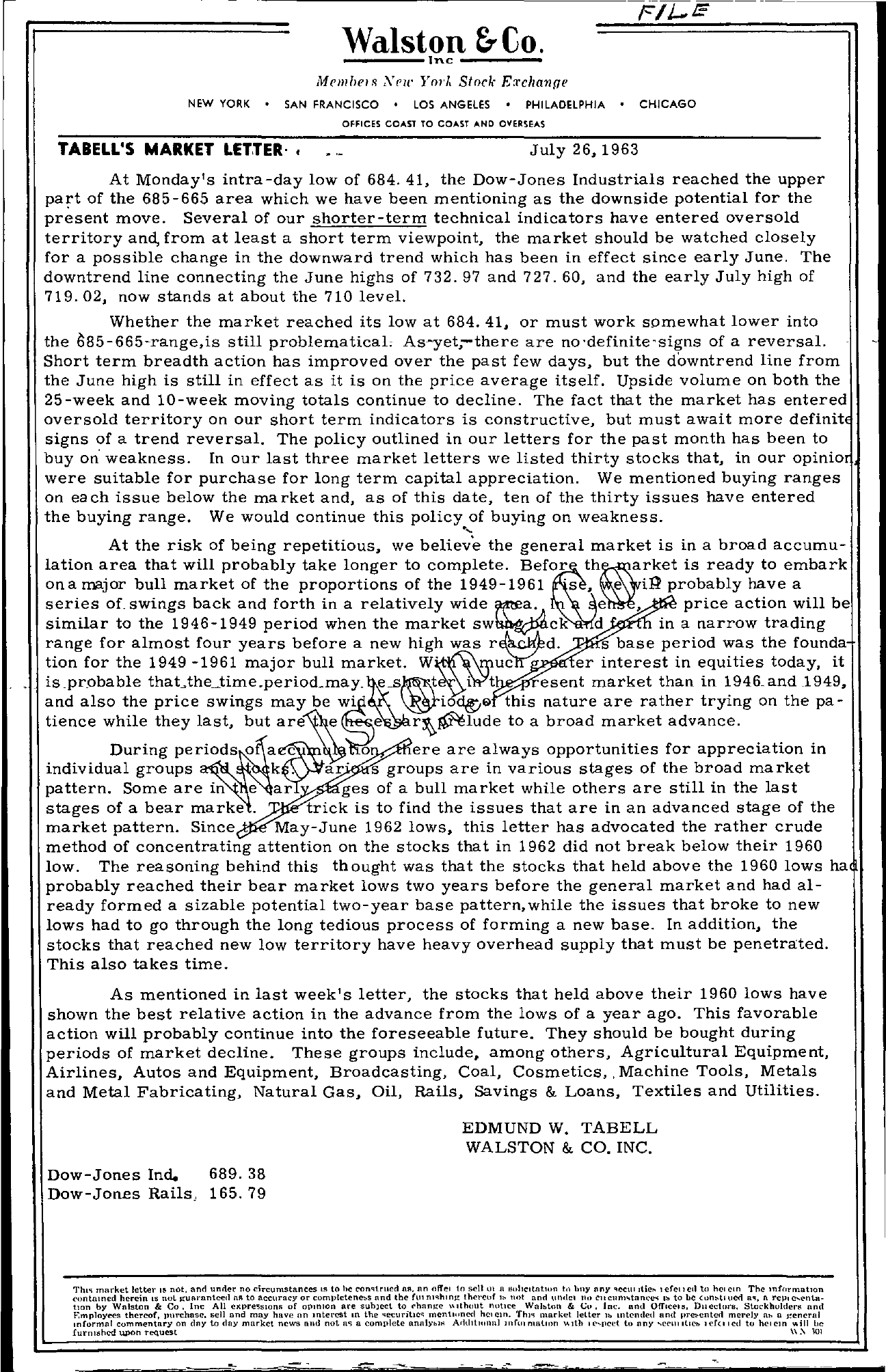 Walston &- Co. Inc FIit Mem Iel R X ell' Y 01'/. Siock Exchayc NEW YORK SAN FRANCISCO LOS ANGELES PHILADELPHIA CHICAGO OFFICES COAST TO COAST AND OVERSEAS TABELL'S MARKET LET.TER , July 26,1963 At Monday's intra-day low of 684.41, the Dow-Jones Industrials reached the upper part of the 685-665 area which we have been mentioning as the downside potential for the present move. Several of our shorter-term technical indicators have entered oversold territory and, from at least a short term viewpoint, the market should be watched closely for a possible change in the downward trend which has been in effect since early June. The downtrend line connecting the June highs of 732. 97 and 727.60, and the early July high of 719.02, now stands at about the 710 level. Whether the market reached its low at 684.41, or must work somewhat lower into the 685-665-range,is still problematicaL AS7et,-there are nO'definite'signs of a reversal. Short term breadth action has improved over the past few days, but the downtrend line from the June high is still in effect as it is on the price average itself. Upside volume on both the 25-week and 10-week moving totals continue to decline. The fact that the market has entered oversold territory on our short term indicators is constructive, but must await more definit signs of a trend reversal. The policy outlined in our letters for the past month has been to buy on' weakness. In our last three market letters we listed thirty stocks that, in our opinio were suitable for purchase for long term capital appreciation. We mentioned buying ranges on each issue below the market and, as of this date, ten of the thirty issues have entered the buying range. We would continue this policy of buying on weakness. At the risk of being repetitious, we believe the general market is in a broad accumu- lation area that will probably take longer to complete. is ready to embark ona major bull market of the proportions of the 1949-1961 's, e ig probably have a series of. swings back and forth in a relatively wide !'Fa' similar to the 1946-1949 period when the market A e, price action will be d in a narrow trading range for almost four years before a new high was s base period was the founda tion for the 1949 -1961 major bull market. er interest in equities today, it is probable esent market than in 1946. and 1949, and also the price swings may be this nature are rather trying on the pa- tience while they last, but Qe to a broad market advance. During periods 0 0 ere are always opportunities for appreciation in individual groups k. ar' s groups are in various stages of the broad market pattern. Some are in e ar ges of a bull market while others are still in the last stages of a bear marke . trick is to find the issues that are in an advanced stage of the market pattern. Since May-June 1962 lows, this letter has advocated the rather crude method of concentrating attention on the stocks that in 1962 did not break below their 1960 low. The reasoning behind this thought was that the stocks that held above the 1960 lows ha probably reached their bear market lows two years before the general market and had al- ready formed a sizable potential two-year base pattern, while the issues that broke to new lows had to go through the long tedious process of forming a new base. In addition, the stocks that reached new low territory have heavy overhead supply that must be penetrated. This also takes time. As mentioned in last week's letter, the stocks that held above their 1960 lows have shown the best relative action in the advance from the lows of a year ago. This favorable action will probably continue into the foreseeable future. They should be bought during periods of market decline. These groups include, among others, Agricultural Equipment, Airlines, Autos and Equipment, Broadcasting, Coal, Cosmetics Machine Tools, Metals and Metal Fabricating, Natural Gas, Oil, Rails, Savings & Loans, Textiles and Utilities. Dow-Jones Ind. 689. 38 Dow-Jones Rails, 165.79 EDMUND W. TABELL WALSTON & CO. INC. Thl'l market letter IS not, and under no circumstances IS to he nil. an offci to sell UI n I!UllCItatWll tel bllY any '1CClllltieo. terCl)Cl) tu hel Cln The mfiJrmatlon ('on tal ned herein IS nol nil to accuracy or coml'lctene.s nnd the fUI nl'lhlnJ,! thereuf ,- lIot and Iindcl un CII cllm.. tan('c'l to he (un..t' lied R'I, n rePI !-.C'nta- hun by Wnlston & Co. Inc All of ornnlon nrc subJect to rbnnj.e \\ltbullt Wah-ton & (;. Inc. and Offlce!s, Duecturs, Stockhulders and Jomployees thereof, lHlrchnse, sell and may have lin Interest In the mentmed heleili. market leHer I IIltcndcd and Ilre-cntCfI merely II n J.cneral Informal cummentary on dny to ClIlY market news and not a complete ann I),,,,; Adthtwnnl lIlfUlnmtlDn …. ,tb tu tiny -.('el11 1111''' ldoled to hCleln …. ill ue furnll,hed UJon request \'.\ 101