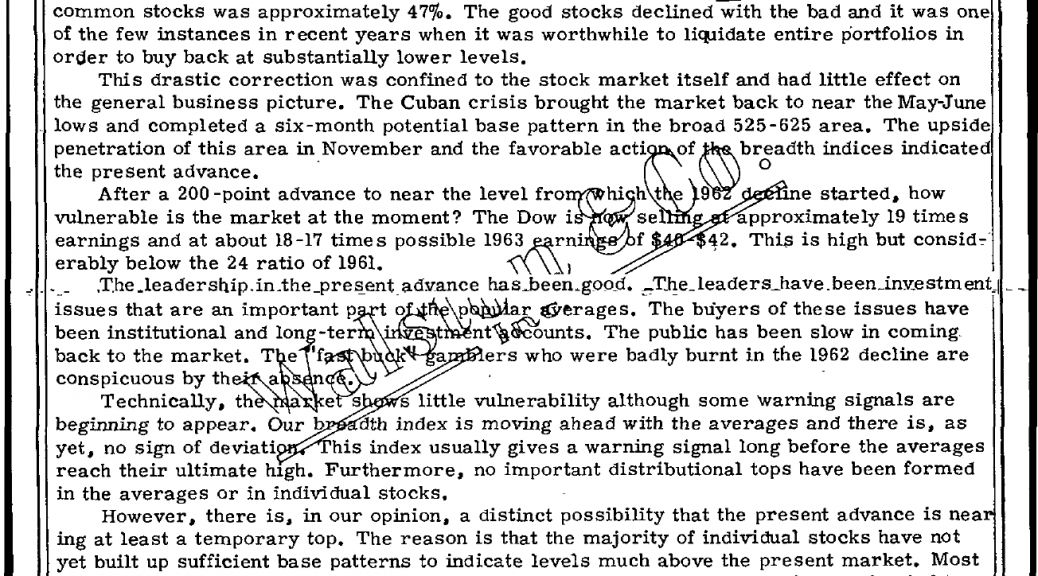 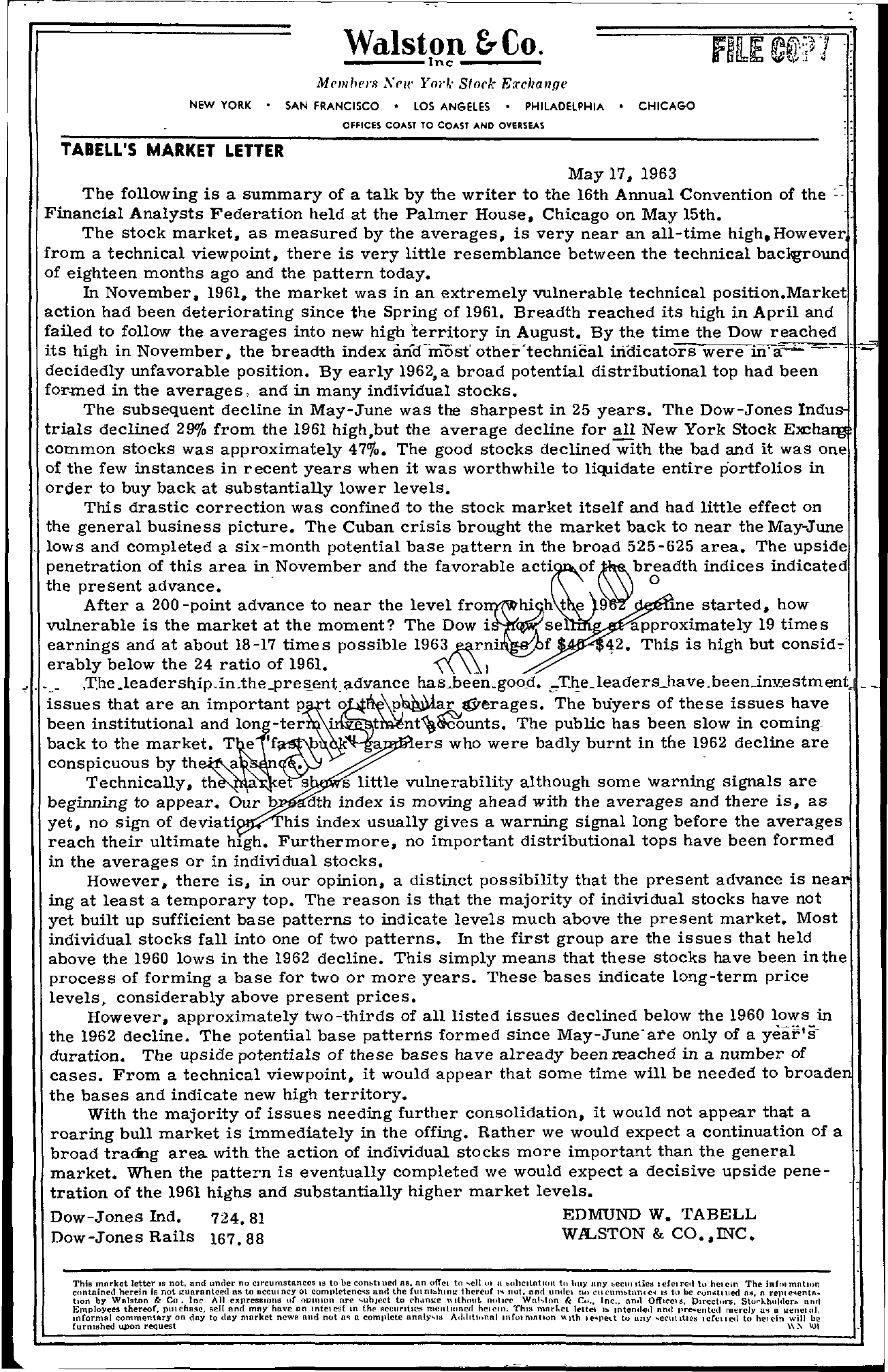 Walston &Co. Xell' YOI'I.. Sioc/, Exchange NEW YORK SAN FRANCISCO LOS ANGELES PHILADELPHIA CHICAGO OFFICES COAST TO COAST AND OVERSEAS TABELL'S MARKET LETTER May 17, 1963 The following is a summary of a talk by the writer to the 16th Annual Convention of the Financial Analysts Federation held at the Palmer House, Chicago on May 15th. The stock market, as measured by the averages, is very near an all-time high,However from a technical viewpoint, there is very little resemblance between the technical of eighteen months ago and the pattern today. In November. 1961, the market was in an extremely vulnerable technical position.Market action had been deteriorating since the Spring of 1961. Breadth reached its high in April and failed to follow the averages into new high 'territory in August. By the time the Dow reached its high in November. the breadth index arid-most' other'technical iriaicators were in-a- – decidedly unfavorable position. By early 1962, a broad potential distributional top had been for–med in the averages, and in many individual stocks. The subsequent decline in May-June was the sharpest in 25 years. The Dow-Jones Indu trials declined 29 from the 1961 high,but the average decline for all New York stock E)(Cha common stocks was approximately 470/0. The good stocks declined with the bad and it was one of the few instances in recent years when it was worthwhile to licpidate entire portfolios in order to buy back at substantially lower levels. This drastic correction was confined to the stock market itself and had little effect on the general business picture. The Cuban crisis brought the market back to near the May-June lows and completed a six-month potential base pattern in the broad 525-625 area. The upside penetration of this area inNovember and the favorable the present advance. After a 200 -point advance to near the level fr0Iehih t e vulnerable is the market at the moment The Dow i 9 indices indicated 0 detrune started, how approximately 19 times earnings and at about 18-17 times possible f 12. This is high but erably below the 24 ratio of 1961. \\ \\.) ,T.he .leadership .in,the present advance has.been.go(td. e-T.heIeaders.have beenimr.estm entl issues that are an important been institutional and Ion -ter . llYerages. The buyers of these issues have The public has been slow in coming- back to the market. T e a ers who were badly burnt in the 1962 decline are conspicuous by th' a . ' – Technically, th e s s little vulnerability although some warning signals are beginning to appear. Our bath index is mOving ahead with the averages and there is, as yet, no sign of deviati his index usually gives a warning signal long before the averages reach their ultimate hlgh. Furthermore, no important distributional tops have been formed in the averages or in individual stocks. However, there is, in our opinion, a distinct possibility that the present advance is nea ing at least a temporary top. The reason is that the majority of individual stocks have not yet built up sufficient base patterns to indicate levels much above the present market. Most individual stocks fall into one of two patterns. In the first group are the issues that held above the 1960 lows in the 1962 decline. This simply means that these stocks have been in the process of forming a base for two or more years. These bases indicate long-term price levels, considerably above present prices. However, approximately two-thirds of all listed issues declined below the 1960 lows in the 1962 decline. The potential base patterns formed since May-June'are only of a yeats- duration. The upside potentials of these bases have already been reached in a number of cases. From a technical viewpoint, it would appear that some time will be needed to broade the bases and indicate new high territory. With the majority of issues needing further consolidation, it would not appear that a roaring bull market is immediately in the offing. Rather we would expect a continuation of a broad tramg area with the action of individual stocks more important than the general market. When the pattern is eventually completed we would expect a decisive upside pene- tration of the 1961 highs and substantially higher market levels. Dow-Jones Ind. 724.81 Dow-Jones Rails 167.88 EDMUND W. TABELL WJLSTON & CO. ,rnc. Thill mnrket letter IS not, and under no Clrcumstnnces IS to he lied liS, nn OffCI tn …ell 01 j\ bohellotlOli ttl Iouy lIny beclIlltics Idel retl t hel eln The inf' mntum cntained herein is not guaranteed as to UUI tlcy Ot and the fill nIhlnl! thereuf 1 flul, und Untlci lin ell 11 tu he l'UIHt1 lied nl, n rCIlll.lentn tlOn by Walston 8 Co, Inl' All eltpreS81Onl tlf OPInion are .,uhJel't tu ('h.lnl!e \\Ithtlul nullce WnJ..ton & Cu., Inc.. an.1 Offleeu, Dlrecttlrs, Stu..)hulder,., IIlul l-mployees thereof, pUlchnse, sell end mny have nn Intel est In the helelli. mflrCl leuel II Ifltendoe, and I'recntcd merely U-I II j.(enelnl beInformul commentary on doy to day market news and nut u'! n eomplete unnl'''I Addltltlnnll1lfulnlntlun …. Ith to lin)' Icfelled to heleln will upon request \\. ,01