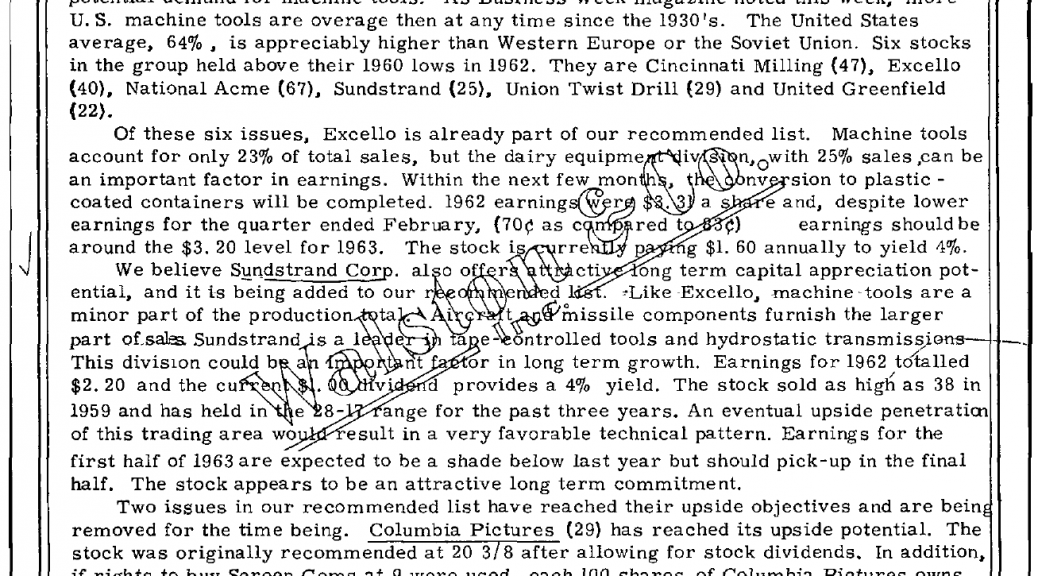 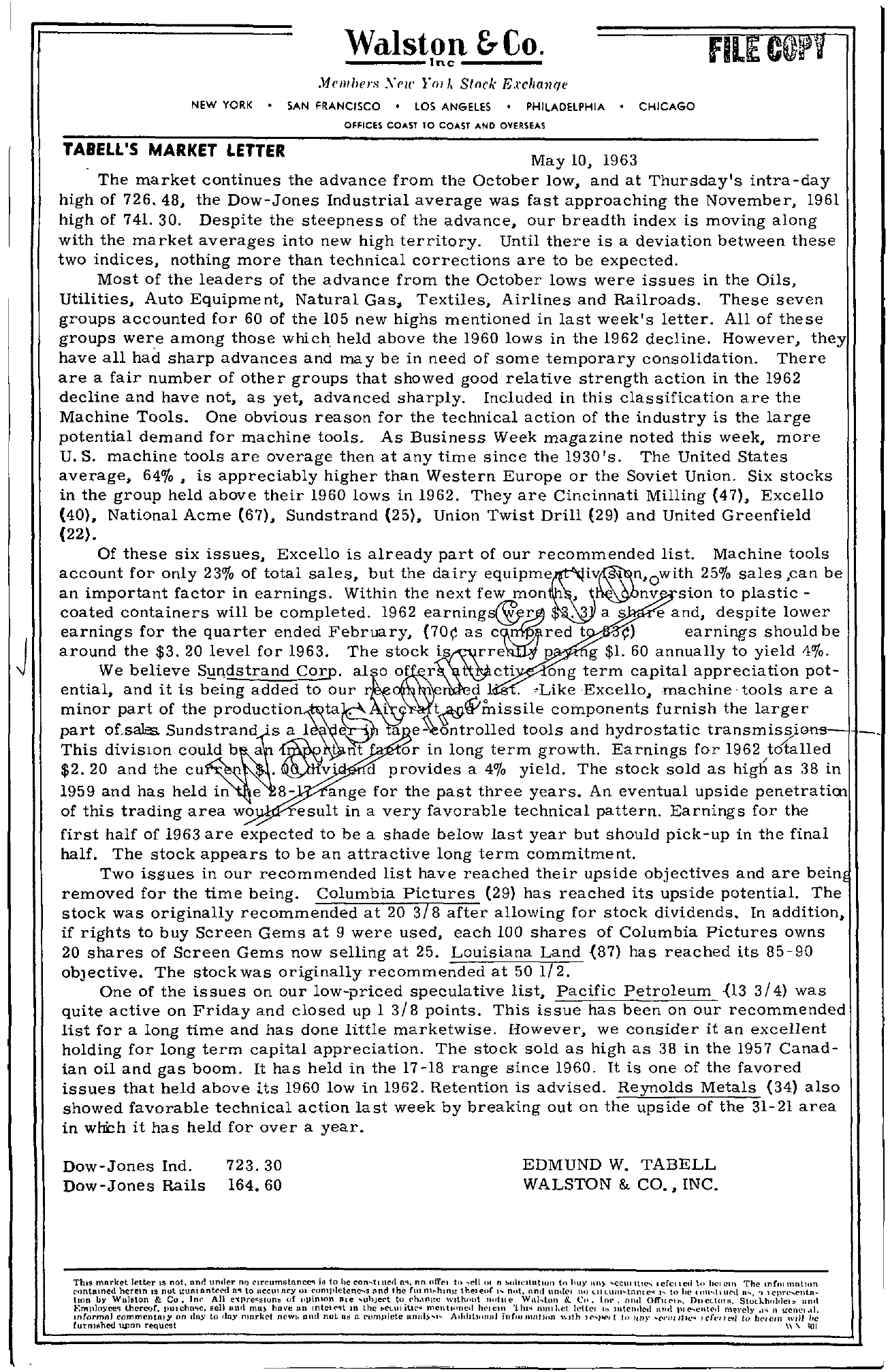 Walston &Co. —–Inc —– J1cmlerN XCIl' ln/I. Sinck E.1'Ca1lqe Fit NEW YORK SAN FRANCISCO LOS ANGELES PHILADELPHIA CHICAGO OFFICES COAST TO COAST AND OVERseAS TABEll'S MARKET lETTER May 10, 1963 The market continues the advance from the October low, and at Thursday's intra-day high of 726.48, the Dow-Jones Industrial average was fast approaching the November, 1961 high of 741. 30. Despite the steepness of the advance, our breadth index is moving along with the market averages into new high territory. Until there is a deviation between these two indices, nothing more than technical corrections are to be expected. Most of the leaders of the advance from the October lows were issues in the Oils, Utilities, Auto Equipment, Natural Gas. Textiles, Airlines and Railroads. These seven groups accounted for 60 of the 105 new highs mentioned in last week's letter. All of these groups were among those which held above the 1960 lows in the 1962 decline. However, they have all had sharp advances and may be in need of some temporary consolidation. There are a fair number of other groups that showed good relative strength action in the 1962 decline and have not, as yet, advanced sharply. Included in this classification are the Machine Tools. One obvious reason for the technical action of the industry is the large potential demand for machine tools. As Business Week magazine noted this week, more U. S. machine tools are overage then at any time since the 1930 'so The United States average, 640/0, is appreciably higher than Western Europe or the Soviet Union. Six stocks in the group held above their 1960 lows in 1962. They are Cincinnati Milling (47), Excello (40), National Acme (67), Sundstrand (25), Union Twist Drill (29) and United Greenfield (22). Of these six issues, Excello is already part of our recommended list. Machine tools account for only 230/0 of total sales, but the dairy 250/0 sales ,can be an important factor in earnings. Within the next few man , sian to plastic – coated containers will be completed. 1962 . a S e and, despite lower earnings for the quarter ended February, (70 as t ) earnings should be J around the 3.20 level for 1963. The stock We believe Sgndstrand Corp. r rre'nlr1 g 1. 60 annually to yield 10/0. cti ong term capital appreciation pot- ential, and it is being added to our r d l' . ,Like 'Excello, machine -tools are a minor part of the productioniaKA i part oLsaJes Sundstrand .sal a -,\\gWmissile components furnish the larger tools and hydrostatic transmissicms . This divislOn could b a t nt or in long term growth. Earnings for 1962 yrtalled 2.20 and the cu . d provides a 40/0 yield. The stock sold as high as 38 in 1959 and has held in 8- ange for the past three years. An eventual upside penetratirn of this trading area wo esult in a very favorable technical pattern. Earnings for the first half of 1963 are expected to be a shade below last year but should pick-up in the final half. The stock appears to be an attractive long term commitment. Two issues in our recommended list have reached their upside objectives and are bein removed for the time being. Columbia Pictures (29) has reached its upside potential. The stock was originally recommended at 20 3/8 after allowing for stock dividends. In addition, if rights to buy Screen Gems at 9 were used, each 100 shares of Columbia Pictures owns 20 shares of Screen Gems now selling at 25. Louisiana Land 87) has reached its 85-90 objective. The stock was originally recommended at 50 1/2. One of the issues on our low-priced speculative list, Pacific Petroleum 13 3/4) was quite active on Friday and closed up 1 3/8 points. This issue has been on our recommended list for a long time and has done little marketwise. However, we consider it an excellent holding for long term capital appreciation. The stock sold as high as 38 in the 1957 Canadian oil and gas boom. It has held in the 17-18 range since 1960. It is one of the favored issues that held above its 1960 low in 1962. Retention is advised. Reynolds Metals (34) also showed favorable technical action last week by breaking out on the upside of the 31- 21 area in whlh it has held for over a year. Dow-Jones Ind. 723.30 Dow-Jones Rails 164.60 EDMUND W. TABELL WALSTON & CO., INC. ,nrtllThiS market. letu.r IS not. nnf! under J1() elrcum6tancel to he ('on..tl lied II'. nn (lfTC! til ..ell 01 I' bultcllutwn til huy 1111) '-celli \tIe.. I cfCII('.ll IH'I CIII The malltln contained herem IS not J!tlfll antcetl lI'I to ncelll Hey 01 ('umpietenc-.s lIno the rut nb,hlll)! hel etl( 1-. nt. nnrl ull.ll'l 11) -II tu ),e t Ihtl ued 'I I tlOn by Wnlston & Co. InC' All e(llre;slum, uf llllinlOn ale .,ubJeet to C'h,1I1)!C wlthlIt Iwtue So. en. InC', nntl OffHt'I … Dllctttll!, I1IHI lherCQf. IIUlchn;c, scll und mu) hnvc un mtCl(';t In the ,.'LIII itlt' ment'Tlct\ h(,ICIII mnl,ct eHel ' lIltcn,letl 111111 111 c–cnt('t\ .1 n j!enel.l1. wformnJ comme.ntlllY on dny to 'lny IllllTk(.'i new nnd nut nil n ('t)Ill)Icte A,hhtJJ1JIJ illfmllllltJon ,,, IHI)' lu herem WIll lie Curmllhed Ullon request ' 'lll