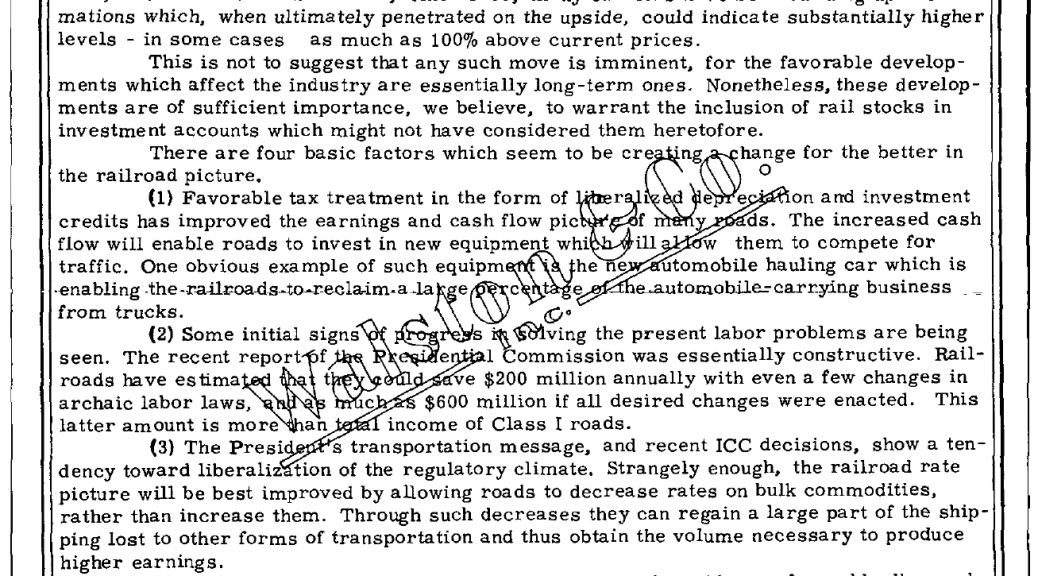 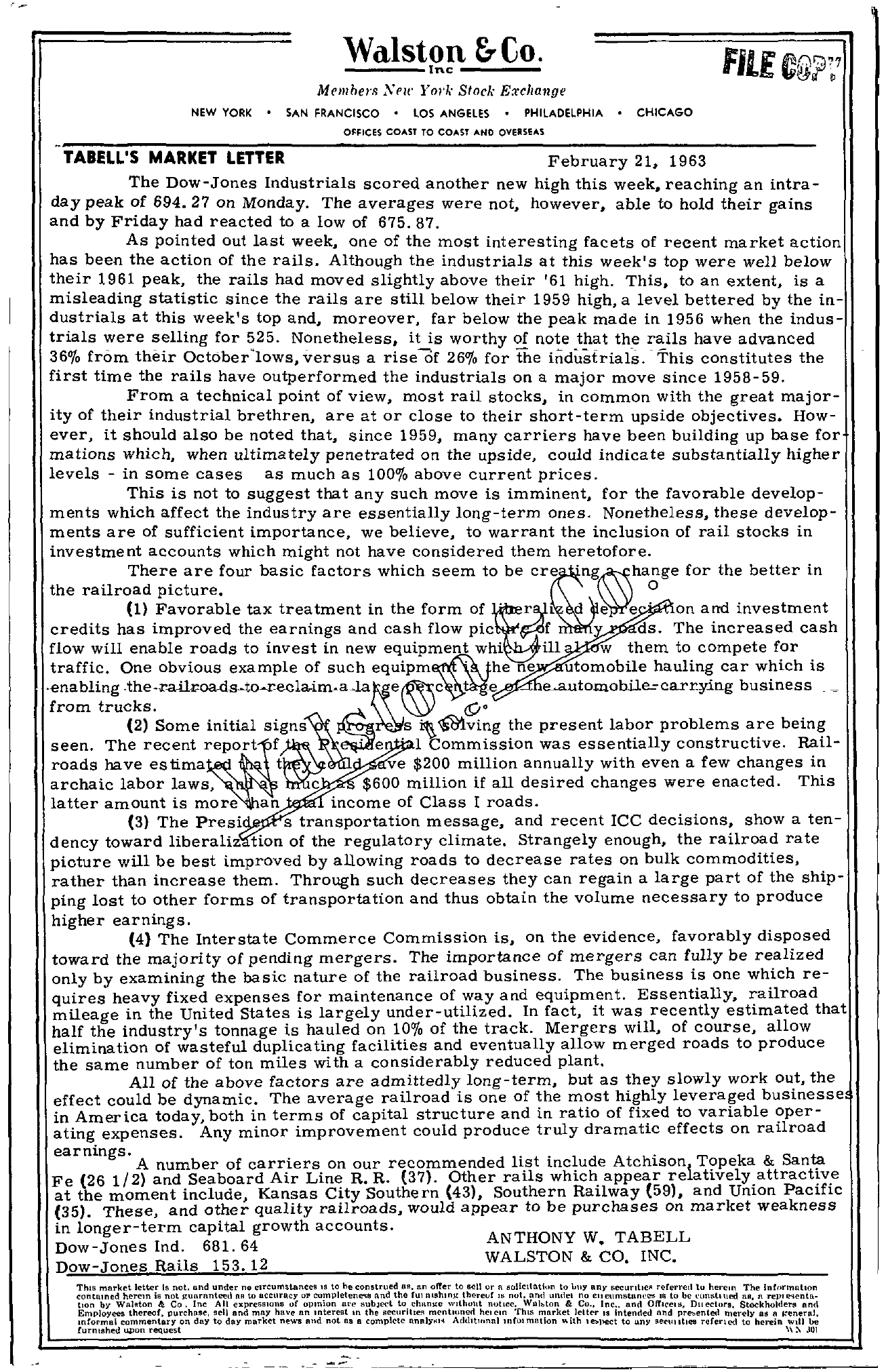 Walston &- Co. Member8 Sell' York Sloek Exchange NEW YORK SAN FRANCISCO LOS ANGELES PHILADELPHIA CHICAGO OIFICES CO….ST TO COAST AND OVERSEAS TABEll'S MARKET lETTER February 21, 1963 The Dow-Jones Industrials scored another new high this week. reaching an intra- day peak of 694.27 on Monday. The averages were not, however. able to hold their gains and by Friday had reacted to a low of 675.87. As pointed out last week, one of the most interesting facets of recent market action has been the action of the rails. Although the industrials at this week's top were well below their 1961 peak, the rails had moved slightly above their '61 high. This. to an extent, is a misleading statistic since the rails are still below their 1959 high, a level bettered by the in- dustrials at this week's top and, moreover, far below the peak made in 1956 when the indus- trials were selling for 525. Nonetheless, it is worthy of note that the rails have advanced 3610 from their Octoberlows, versus a riseof 26 for the indusfrials. -This constitutes the first time the rails have outperformed the industrials on a major move since 1958-59. From a technical point of view, most rail stocks. in common with the great major- ityof their industrial brethren, are at or close to their short-term upside objectives. How- ever, it should also be noted that, since 1959, many carriers have been building up base for mations which, when ultimately penetrated on the upside, could indicate substantially higher levels – in some cases as much as 100 above current prices. This is not to suggest that any such move is imminent, for the favorable develop- ments which affect the industry are essentially long-term ones. Nonetheless, these develop- ments are of sufficient importance, we believe, to warrant the inclusion of rail stocks in investment accounts which might not have considered them heretofore. Thor. . . . the railroad picture. boe ''toe whi'h , m to b. for the better in 0 (1) Favorable tax treatment in the form of credits has improved the earnings and cash flow pic dee' on and investment y as. The increased cash flow will enable roads to invest in new equipment whi ill w them to compete for traffic. One obvious example of such the ne utomobile hauling car which is -enabling from trucks. (2) Some initial seen. The recent report roads have es tima t W 90 e.automobil carrying business s the present labor problems are being . e . 1 Commission was essentially constructive. Rail- ve 200 million annually with even a few changes in archaic labor laws, c 600 million if all desired changes were enacted. This latter amount is more an income of Class I roads. (3) The Presi s transportation message, and recent ICC decisions, show a ten- dency toward liberaliz Hon of the regulatory climate. Strangely enough, the railroad rate picture will be best improved by allowing roads to decrease rates on bulk commodities, rather than increase them. Through such decreases they can regain a large part of the shipping lost to other forms of transportation and thus obtain the volume necessary to produce higher earnings. (4) The Interstate Commerce Commission is, on the evidence, favorably disposed toward the majority of pending mergers. The importance of mergers can fully be realized only by examining the basic nature of the railroad business. The business is one which re- quires heavy fixed expenses for maintenance of way and equipment. Essentially, railroad mileage in the United States is largely under-utilized. In fact, it was recently estimated that half the industry's tonnage is hauled on 10 of the track. Mergers will, of course, allow elimination of wasteful duplicating facilities and eventually allow merged roads to produce the same number of ton miles with a considerably reduced plant. All of the above factors are admittedly long-term, but as they slowly work out, the effect could be dynamic. The average railroad is one of the most highly leveraged businesse in America today, both in terms of capital structure and in ratio of fixed to variable perating expenses. Any minor improvement could produce truly dramatic effects on rallroad earnings. A number of carriers on our recommended list include Atchison Topeka & Santa Fe (26 1/2) and Seaboard Air R. R. (37). Other rails which. appear at the moment include, Kansas Clty Southern (43), Southern Rallway (59). and Umon PaClhc (35). These, and other quality railroads, would appear to be purchases on market weakness in longer-term capital growth accounts. Dow-Jones Ind. 681. 64 Dow-Jones Rails 153.12 ANTHONY W. TABELL WALSTON & CO. INC. ThiS market letter is not, and under no Circumstances IS to he construed 1111. an olter to IIcll or n soliCitation to buy any sccuntlc,; r('Ccrrc!llo herem The In (ormation contained herem is not RA to accuracy 01' oo!'lpletenC!9 And the CUI nls'\ln).! thereur It! not. oml undel no ell IS to be !'Imslilled 0.8, n rept e-enta- by Waillton & Co. Inc All expreSSIOns of OPinion tire lIubJect to chnn).(e wltholtt notice; Wah.ton & Co., Inc. and O!flcelll. Duectors, Stockholders and Employees thereor, purchase. sell and may have nn mterest In the securities mentttmerl het em ChiS market letter IS intended Rnd pre.-ented merely as R Keneral. mrormal commentary on dny to dny market news and not as B complete nnalYllt'l Atltlltlllnalm(olmntion \\ith le.1JoCct to uny se(,lIl1tleB refened to herein WIll be furntshed l\lIon request \\-.. 301