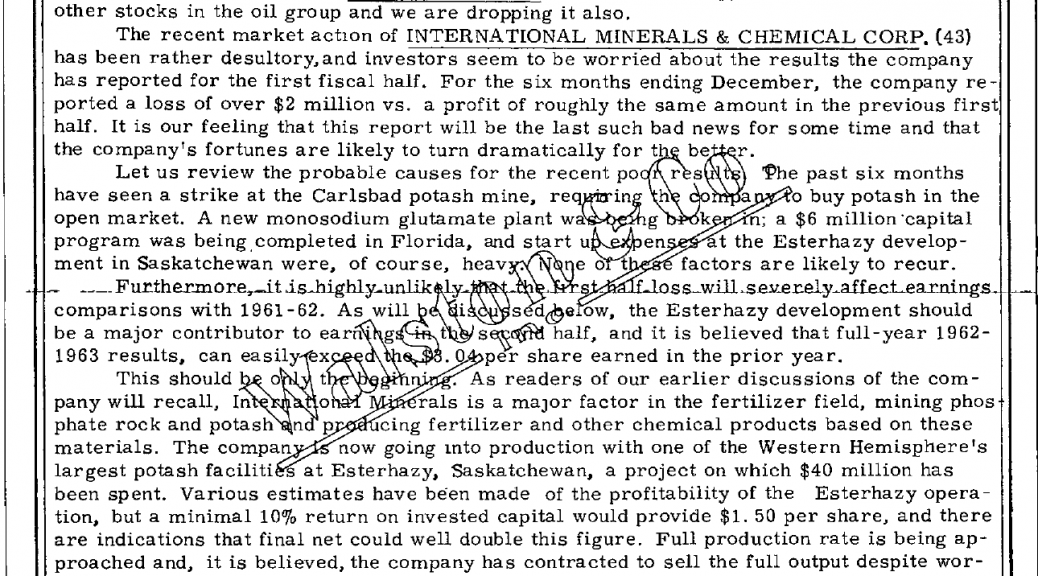 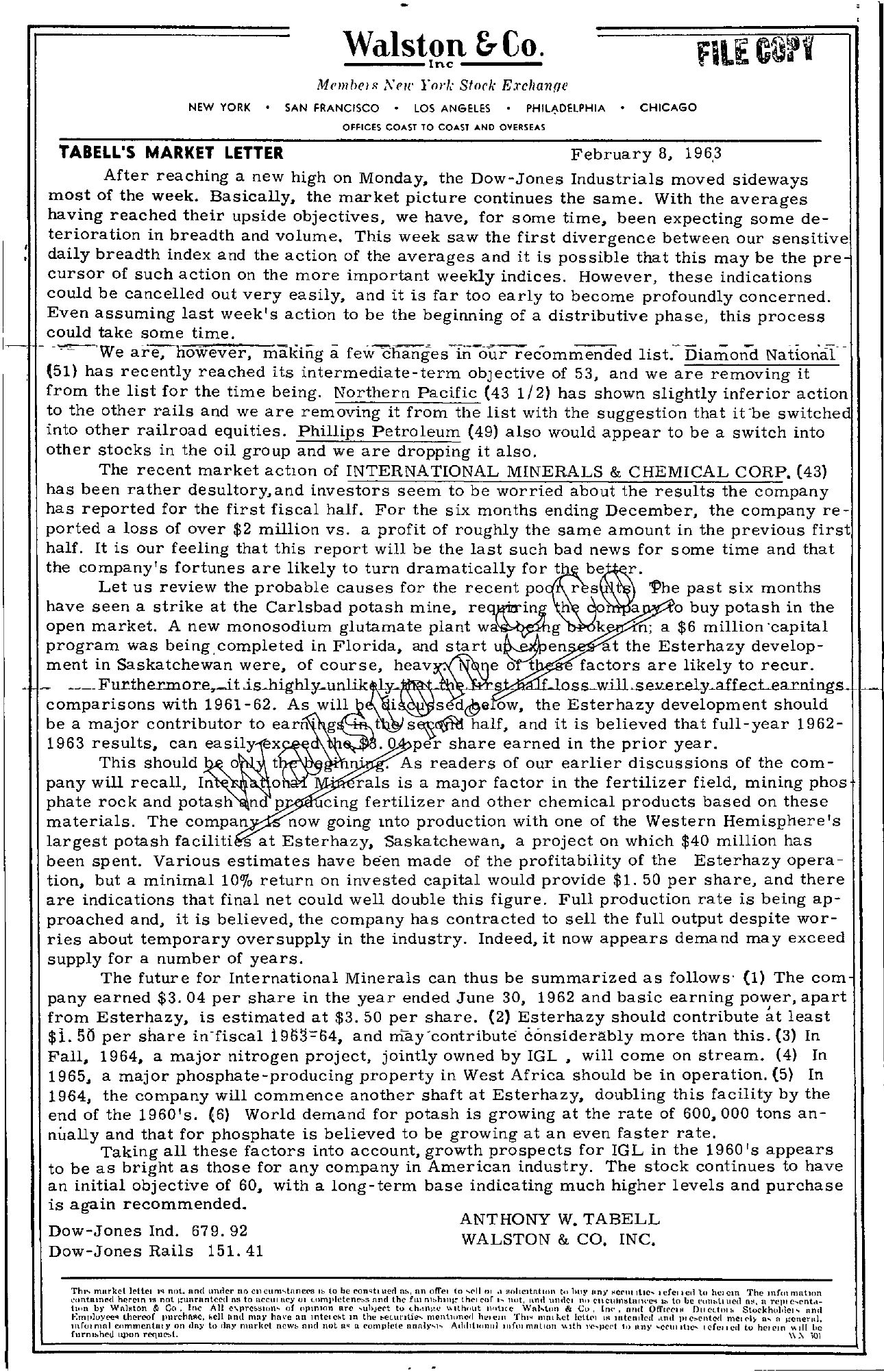 Walston &- Co. —–Inc —– MI'III!e, Xell' rod.. Stork E.rchan(Jc NEW YORK SAN FRANCISCO LOS ANGELES PHIL-!-DELPHIA CHICAGO OFFICES COAST TO COAST AND OVERSEAS TABEll'S MARKET lETTER February 8, 196.3 After reaching a new high on Monday, the Dow-Jones Industrials moved sideways most of the week. Basically, the market picture continues the same. With the averages having reached their upside objectives, we have, for some time, been expecting some de- terioration in breadth and volume. This week saw the first divergence between our sensitive daily breadth index and the action of the averages and it is possible that this may be the pre cursor of such action on the more important weekly indices. However, these indications could be cancelled out very easily, and it is far too early to become profoundly concerned. Even assuming last week's action to be the beginning of a distributive phase, this process could take some time. a- are-Eowever, making fewchangesin-()ur recommended National' (51) has recently reached its intermediate-term objective of 53, and we are removing it from the list for the time being. Northern Pacific (43 1/2) has shown slightly inferior action to the other rails and we are removing it from the list with the suggestion that it'be switched into other railroad equities. Phillips Petroleum (49) also would appear to be a switch into other stocks in the oil group and we are dropping it also. The recent market actlOn of INTERNATIONAL MINERALS & CHEMICAL CORP. 43 has been rather desultory,and investors seem to be worried about the results the company has reported for the first fiscal half. For the six months ending December, the company re- ported a loss of over 2 million vs. a profit of roughly the same amount in the previous first half. It is our feeling that this report will be the last such bad news for some time and that the company's fortunes are likely to turn dramatically bem' Let us review the probable causes for the recent po r S 1'he past six months have seen a strike at the Carlsbad potash mine, h a 0 buy potash in the open market. A new monosodium glutamate plant k 'n; a 6 million 'capital program was beingeompleted in Florida, and start ment in Saskatchewan were, of course, heav . e (i1h, at the Esterhazy developfactors are likely to recur. . Furtherm.or.e,…it .s ffed earnings comparisons with 1961-62. As i sedcl1e ow, the Esterhazy development should be a major contributor to .t half, and it is believed that full-year 1962- 1963 results, can easily .0 per share earned in the prior year. This should 0 t . As readers of our earlier discussions of the com- pany will recall, In 0 . rals is a major factor in the fertilizer field, mining phos phate rock and potash n R cing fertilizer and other chemical products based on these materials. The compan now going mto production with one of the Western Hemisphere's largest potash faciliti s at Esterhazy, Saskatchewan, a project on which 40 million has been spent. Various estimates have been made of the profitability of the Esterhazyopera- tion, but a minimal 10 return on invested capital would provide 1. 50 per share, and there are indications that final net could well double this figure. Full production rate is being ap- proached and, it is believed, the company has contracted to sell the full output despite wor- ries about temporary oversupply in the industry. Indeed, it now appears demand may exceed supply for a number of years. The future for International Minerals can thus be summarized as follows' (1) The com pany earned 3.04 per share in the year ended June 30, 1962 and basic earning power, apart from Esterhazy, is estimated at 3.50 per share. (2) Esterhazy should contribute at least 1. 50 per share in'fiscal 191364, and C()nsiderably more than this. (3) In Fall, 1964, a major nitrogen project, jointly owned by IGL , will come on stream. (4) In 1965, a major phosphate-producing property in West Africa should be in operation. (5) In 1964, the company will commence another shaft at Esterhazy, doubling this facility by the end of the 1960's. (6) World demand for potash is growing at the rate of 600,000 tons an- nually and that for phosphate is believed to be growing at an even faster rate. Taking all these factors into account, growth prospects for IGL in the 1960 's appears to be as bright as those for any company in American industry. The stock continues to have an initial objective of 60, with a long-term base indicating much higher levels and purchase is again recommended. Dow-Jones Ind. 679.92 Dow-Jones Rails 151. 41 ANTHONY W. TABELL WALSTON & CO. INC. murkel lE.'ttel 1'1 not. find unckr no I'll Cllm… tnnCl'S to be '1uecl nn offel tn ..II 01 ,\ sf)itCltntu)Il tu hllY uny IcrUlltl!'-. I dClic,11u em The mfm matln herein IS not !-!,unrnntccd ns to UCCIIIIICY .II nnd the fLII thel ('or h 1Iut, nn.IIIIHIcI n t'IIClIhl!!tiIlW''I I to he l'nohllcd 11 rCll1c…entd- hn by & Co, In(' All of OI11n1On nrc tu \\Ilhut IIltI(C & Cll, In(', lind 11n.1 Empoy('('q thereof Ilurchnllc, bcll nnd mny hnl'c nn In the oeturltie–. mcntwned hell'11I Illfukct icttC-l III lIItclllled ,11ul jlleoentcd mel'h n… fl g-enerul, mrolmnl cIlmmcntuty on dn)' to flRY murket find not n comlJlcte nnniYh Ad,hllllnllilllflll mlltlun \llth l'e,led 10) I cfl'1 ICe! tu hC1CIn 111 he furnn,hed l\pun requehl. \\.\ ;01