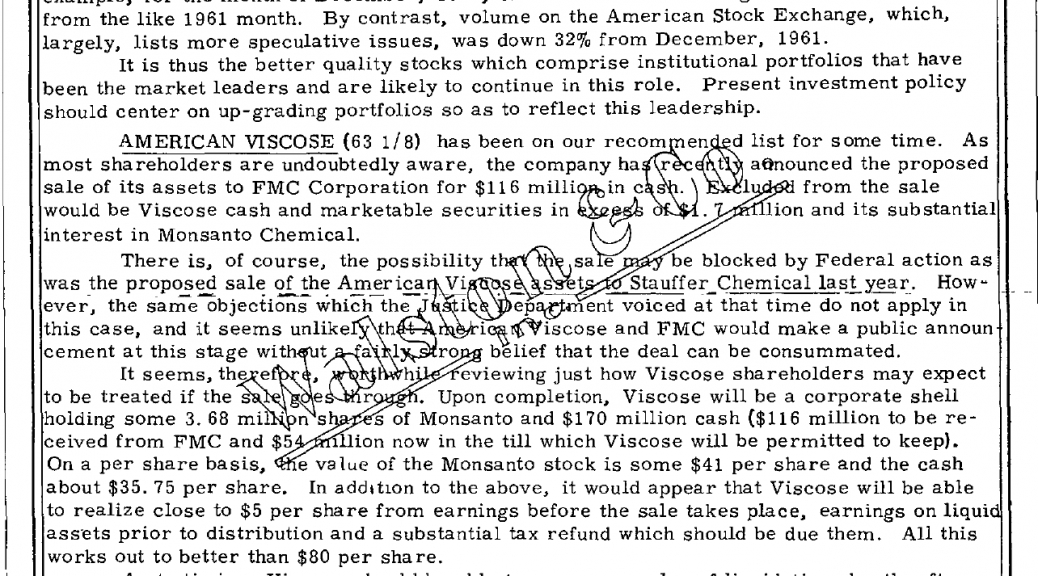 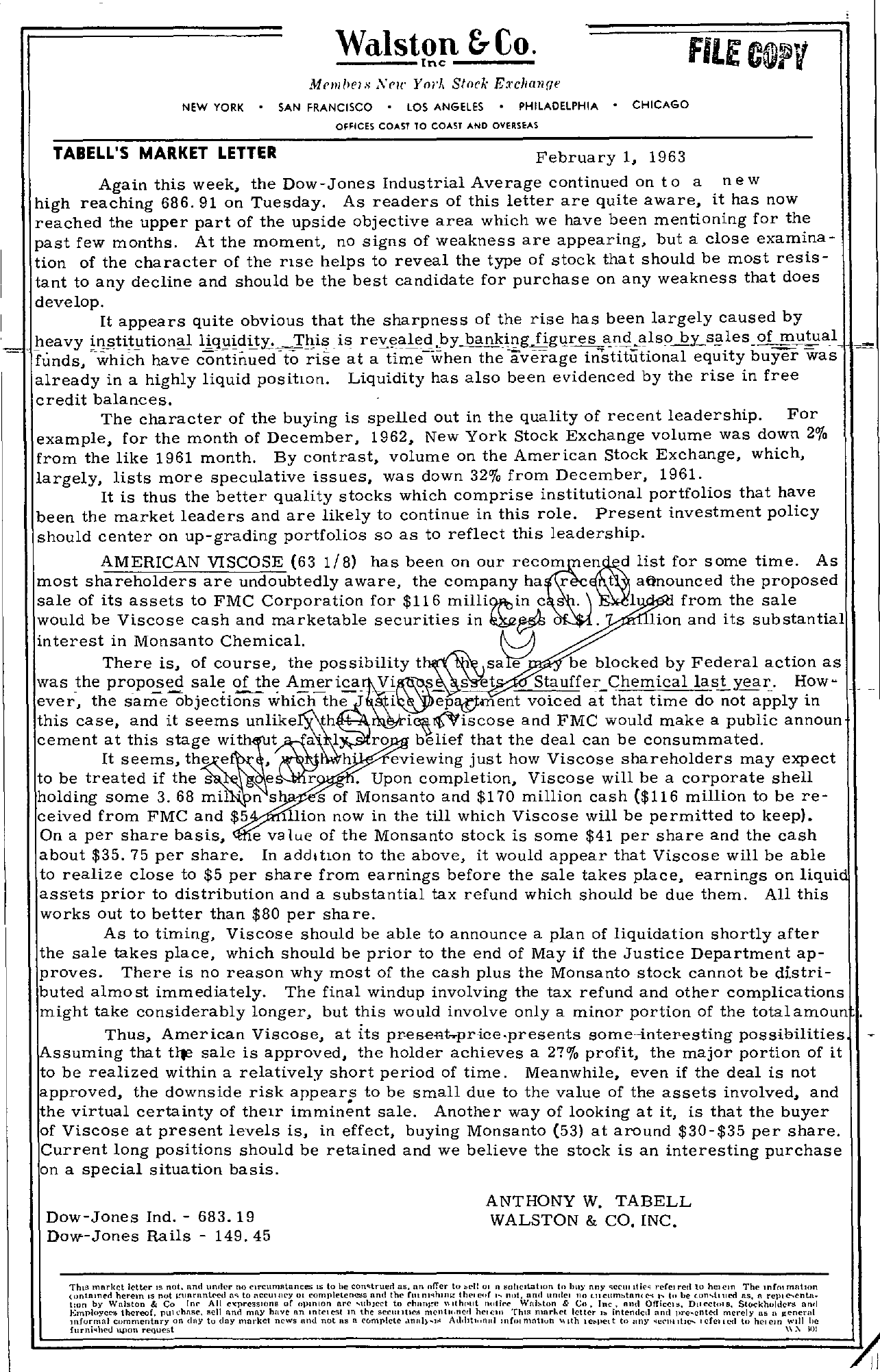 Walston &- Co. Inc 111 rill bel X rIC Ynrl. Sinch- E.Tchall(Jf NEW YORK SAN FRANCISCO LOS ANGELES PHILADELPHIA OffiCES COAST TO COAST AND OVERSEAS FILE CQPV CHICAGO TABELL'S MARKET LETTER February 1, 1963 Again this week, the Dow-Jones Industrial Average continued on to a new high reaching 686.91 on Tuesday. As readers of this letter are quite aware, it has now reached the upper part of the upside objective area which we have been mentioning for the past few months. At the moment, no signs of weakness are appearing, but a close examina- tion of the character of the rlse helps to reveal the type of stock that should be most resis- tant to any decline and should be the best candidate for purchase on any weakness that does develOp. It appears quite obvious that the sharpness of the rise has been largely caused by . peavy !r1.J!titlltional This. is banking .f!.gl!res of mu.!.ual funds, which have continued to rise at a time when the average institutional eqUlty buyer was already in a highly liquid positlOn. Liquidity has also been evidenced by the rise in free credit balances. The character of the buying is spelled out in the quality of recent leadership. For example, for the month of December, 1962, New York Stock Exchange volume was down 2 from the like 1961 month. By contrast, volume on the American Stock Exchange, which, largely, lists more speculative issues, was down 32 from December, 1961. It is thus the better quality stocks which comprise institutional portfolios that have been the market leaders and are likely to continue in this role. Present investment policy should center on up-grading portfolios so as to reflect this leadership. AMERICAN VISCOSE (63 1/8) has been on our list for some time. As most shareholders are undoubtedly aware, the company ha r t aOnounced the proposed sale of its assets to FMC Corporation for 116 milli9foin c . I from the sale would be Viscose cash and marketable securities in . lion and its substantial interest in Monsanto Chemical. There is, of course, the possibility IsaVn be blocked by Federal action as was the proposed sale of the ever, the sameobjectiOns Stauffer Chemical last year. How- voiced at that time do –;;-otapply in this case, and it seems and FMC would make a public announ cement at this stage with t;o I ro belief that the deal can be consummated. It seems, the e , h' eviewing just how Viscose shareholders may expect to be treated if the s er . Upon completion, Viscose will be a corporate shell holding some 3.68 mil n s s of Monsanto and 170 million cash (116 million to be re- ceived from FMC and 5 lion now in the till which Viscose will be permitted to keep). On a per share basis, e va lue of the Monsanto stock is some 41 per share and the cash about 35. 75 per share. In addition to the above, it would appear that Viscose will be able to realize close to 5 per share from earnings before the sale takes place, earnings on liqui ass'ets prior to distribution and a substantial tax refund which should be due them. All this works out to better than 80 per share. As to timing, Viscose should be able to announce a plan of liquidation shortly after the sale takes place, which should be prior to the end of May if the Justice Department ap- proves. There is no reason why most of the cash plus the Monsanto stock cannot be distributed almost immediately. The final windup involving the tax refund and other complications might take considerably longer, but this would involve only a minor portion of the total amoun Thus, American Viscose, at its some-interesting possibilities Assuming that tlf sale is approved, the holder achieves a 27 profit, the major portion of it to be realized within a relatively short period of time. Meanwhile, even if the deal is not approved, the downside risk appears to be small due to the value of the assets involved, and the virtual certainty of theIr sale. Another way of looking at it, is that the buyer of Viscose at present levels is, in effect, buying Monsanto (53) at around 30-35 per share. Current long positions should be retained and we believe the stock is an interesting purchase on a special situation basis. Dow-Jones Ind. – 683.19 Dow–Jones Rails – 149.45 ANTHONY W. TABELL WALSTON & CO. INC. ThiS mnrket letwr IS not. nncl uRfler no ClfCllmllto,nces IS to he con;truel'l as, un offer to bel! or n suhcltatlOn tn 1111)' nny rc(CI reilo hClcln The mC'lI matum mtnlned herein IS not I!tlrlrnnt('eu n; to aCCUlIlCY 01 compietene;s nnd the rm 11I..hll1!. thel cnf I., 'lilt, lnll umlCI 110 tliClIlm,tnn( C' I' tn be Lun-.lIlled as, I repi e-.enlu. tllm by Wnlston & Co Inl' All e'preSSlOn!! or nplfilon are -.tlhJcct to (hml!.c ,\I(h,,t Iltlti('' Wnbton Co, Inc, Hnd neeh'ls, St(.ekhuldcrg !lnt! th('reof, ptl1chnse, Bell nnd may hllvc an mtelest 1n the seelllltlCll mentll,ned helCII! ThIS mar'et letter I intendcll lIIul pre.,entecl merely ns \ mformnl Cnmmentnry on IIny to dny mnrkel news !lnd nolll8 n ('omplete ,mni),,' Alldlh'lltl 1I1(4)lnlntlun \I,th lellett to Imy Icfellell to helem Will he