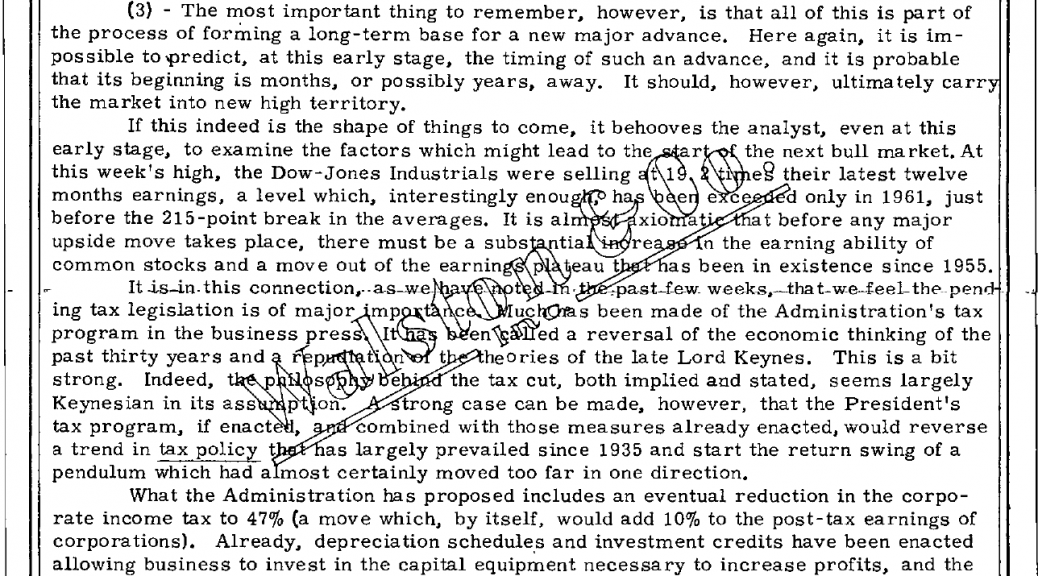 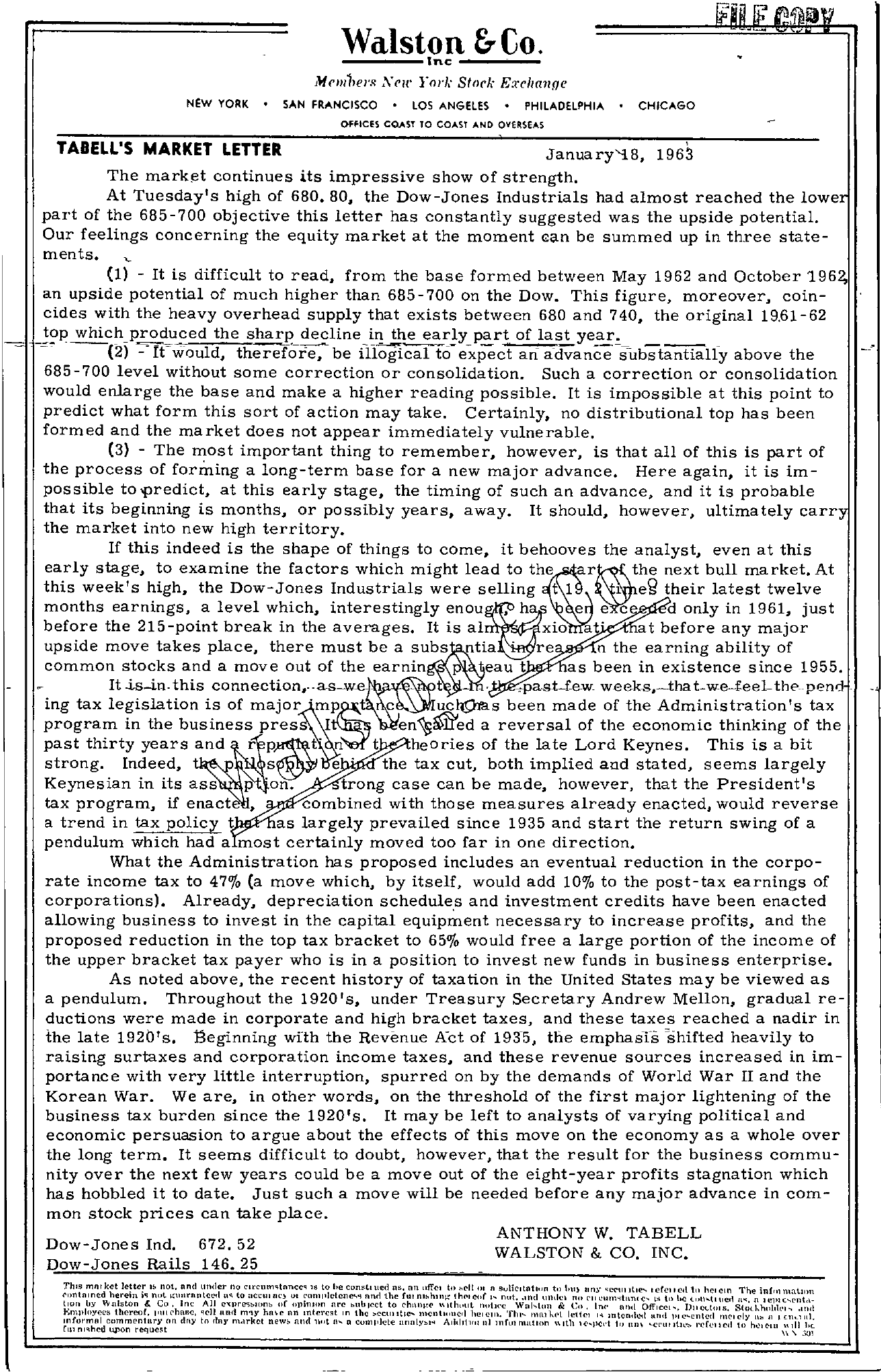 Wdlston &Co. —–Inc MrIll1,el'. Xrl' rod.. Stork Exchange NEW YORK SAN FRNCISCO LOS NGELES PHILOELPHI OFfiCES COAST TO COAST AND OVERSEAS CHICAGO TABEll'S MARKET lETTER January'18, 1963 The market continues its impressive show of strength. At Tuesday's high of 680.80, the Dow-Jones Industrials had almost reached the part of the 685-700 objective this letter has constantly suggested was the upside potential. Our feelings concerning the equity market at the moment ean be summed up in three state- ments. (1) – It is difficult to read, from the base formed between May 1962 and October 1 an upside potential of much higher than 685-700 on the Dow. This figure, moreover, coin- cides with the heavy overhead supply that exists between 680 and 740, the original 19.61-62 which produced the sharp decline in the early part of last year. '–(2) would, therefore, be il1ogiCaltci- expect an advance-substaiilially above the 685 -700 level without some correction or consolidation. Such a correction or consolidation would enlarge the base and make a higher reading possible. It is impossible at this point to predict what form this sort of action may take. Certainly, no distributional top has been formed and the market does not appear immediately vulnerable. (3) – The most important thing to remember, however, is that all of this is part of the process of forming a long-term base for a new major advance. Here again, it is im- possible to ..predict, at this early stage, the timing of such an advance, and it is probable that its beginning is months, or possibly years, away. It should, however, ultimately ca the market into new high territory. If this indeed is the shape of things to come, it behooves the analyst, even at this early stage, to examine the factors which might lead to the next bull market. At this week's high, the Dow-Jones Industrials were selling t 1 r eg their latest twelve months earnings, a level which, interestingly e e c a only in 1961, just before the 215-point break in the averages. It is al xio at' at before any major upside move takes place, there must be a tia' re n the earning ability of common stocks and a move out of the earnin eau t as been in existence since 1955. – It .is-in, this ' . -,pa.st-te.w week.s,–tha twe-feeL thE'.. P ing tax legislation is of c been made of the Administration's tax program in the business pres I ensaSIl'ed a reversal of the economic thinking of the past thirty years and I' n theories of the late Lord Keynes. This is a bit strong. Indeed, e' the tax cut, both implied and stated, seems largely Keynesian in its ass p on. trong case can be made, however, that the President's tax program, if enact combined with those measures already enacted, would reverse a trend in tax policy t as largely prevailed since 1935 and start the return swing of a pendulum which had a most certainly moved too far in one direction. What the Administration has proposed includes an eventual reduction in the corpo- rate income tax to 470/0 (a move which, by itself, would add 100/0 to the post-tax earnings of corporations). Already, depreciation schedules and investment credits have been enacted allowing business to invest in the capital equipment necessary to increase profits, and the proposed reduction in the top tax bracket to 650/0 would free a large portion of the income of the upper bracket tax payer who is in a position to invest new funds in business enterprise. As noted above, the recent history of taxation in the United States may be viewed as a pendulum. Throughout the 1920's, under Treasury Secretary Andrew Mellon, gradual re- ductions were made in corporate and high bracket taxes, and these taxes reached a nadir in the late 192b's. 13eginning wi'th the Revenue Act of 193-5, the emphasTs shifted heavily to raising surtaxes and corporation income taxes, and these revenue sources increased in im- portance with very little interruption, spurred on by the demands of World War II and the Korean War. We are, in other words, on the threshold of the first major lightening of the business tax burden since the 1920's. It may be left to analysts of varying political and economic persuasion to argue about the effects of this move On the economy as a whole over the long term. It seems difficult to doubt, however, that the result for the business commu- nity over the next few years could be a move out of the eight-year profits stagnation which has hobbled it to date. Just such a move will be needed before any major advance in com- mon stock prices can take place. Dow-Jones Ind. 672.52 Dow-Jones Rails 146.25 ANTHONY W. TABELL WALSTON & CO. INC. ThIS milt ket lIot, and under no CLrCum.,tnnce'i IS to he contl tied IlS, nn ffet tn hclt III n sulicltntm to 10\1) nllY I dell ell 'til hel eln The infm malliln l'ontnlncd herein not j,l1nrnntcl'llI; to nCCUlIH') tn nnrl the fill I not. ,lnd 111ldel IH ('II til he (l)u(llierl n lcplc-.cntl' hy Wnlstan l.. Co, Inc All C'l(pre!blOnb of o)lnJUn nrc bublcct to ehllnl-'!' \\ltllPlit nuhec & Cn, 1m' 111111 DIIC(OIS, ,Ind hmllinyees thereof, l'lIlehnRc, m'l.Y hn\c nil mtl'cst III the oCClIllt!C rncntlHllcri helClIl, 'fhi' mnlh('t Icttel mClcly II lCIl,-llll Infor'mlll cummentllry nn lIny tn ,IllY nl.lrket new. nnd lIut n…. (I complete AlldltlllIll11fulmlltlon \\lt11 If) llll\ ..crllllh…, l'cfcIICe! tu h,-'ICIII III fUl upon request \\ 301