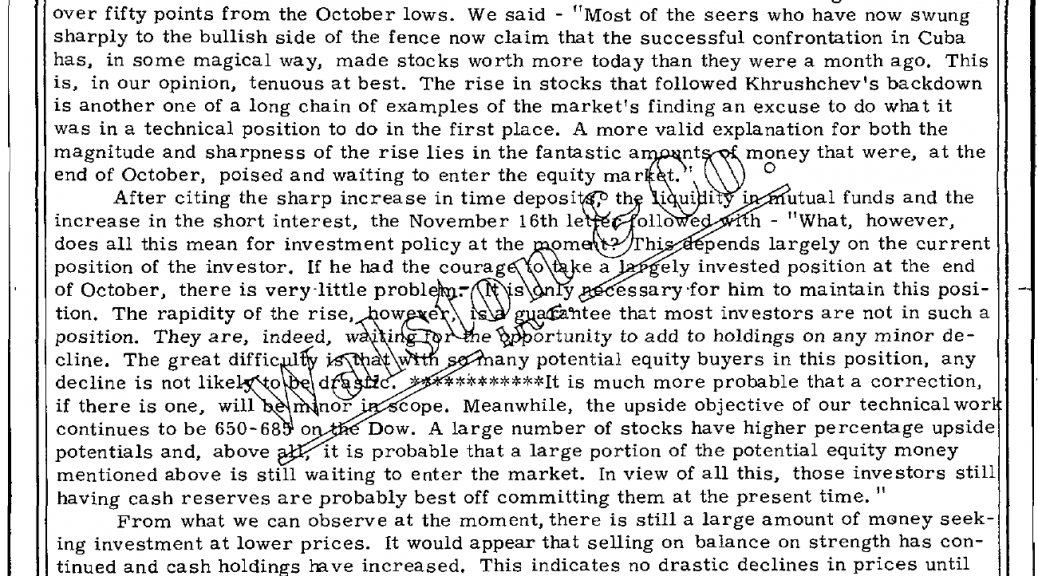 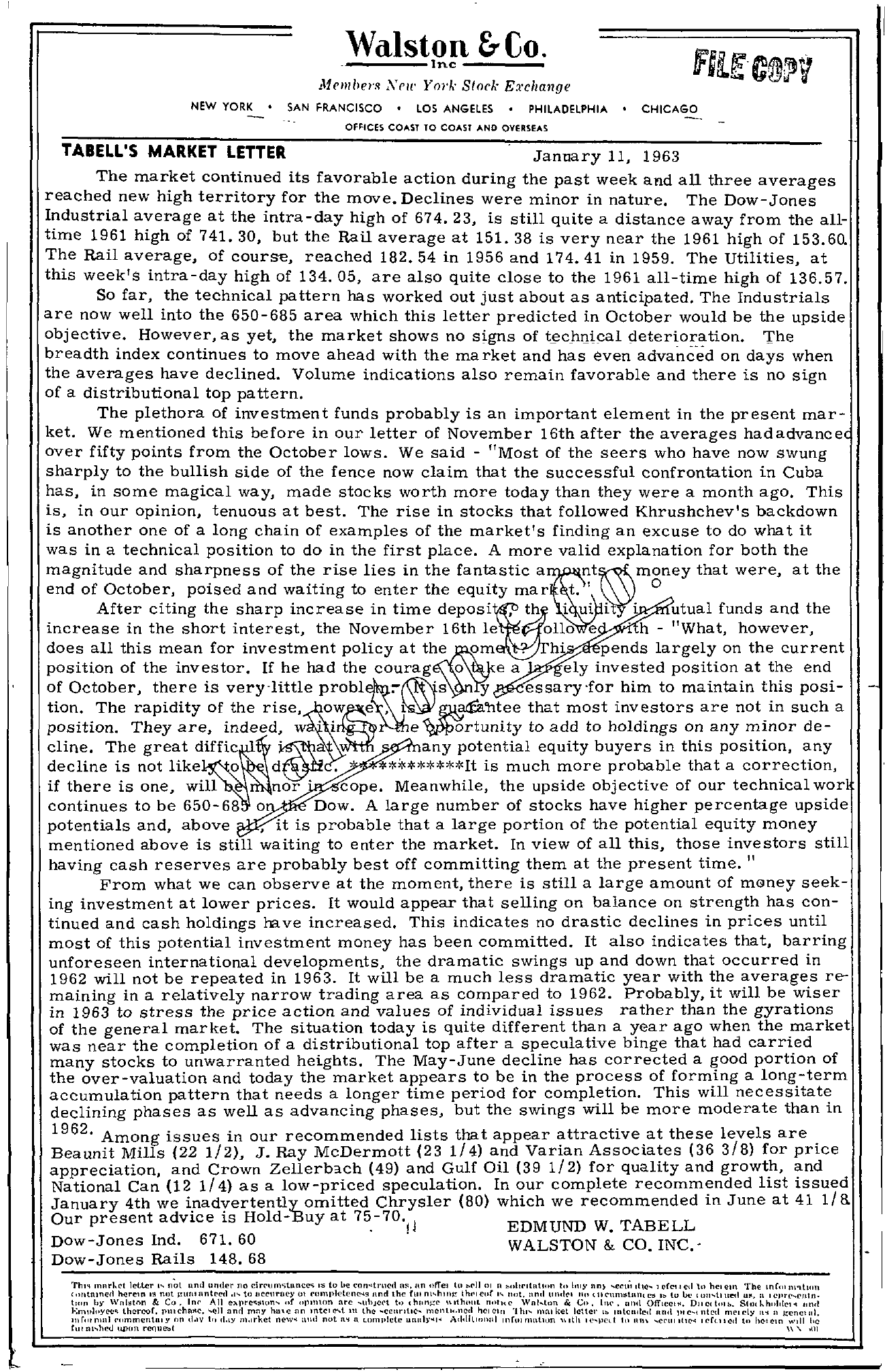 Wdlston &- Co. Mem/,.,'. Xell' YOJ'k Siock Euha110e NEW YORK SAN FRANCISCO LOS ANGELES PHILADELPHIA OFFICES COAST TO COAST AND OVERSEAS CHICAGO TABELL'S MARKET LETTER January 11, 1963 The market continued its favorable action during the past week and all three averages reached new high territory for the move. Declines were minor in nature. The Dow-Jones Industrial average at the intra-day high of 674.23, is still quite a distance away from the all- time 1961 high of 741. 30, but the Rail average at 151. 38 is very near the 1961 high of 153.60. The Rail average, of course, reached 182.54 in 1956 and 174.41 in 1959. The Utilities, at this week's intra-day high of 134.05, are also quite close to the 1961 all-time high of 136.57. So far, the technical pattern has worked out just about as anticipated. The Industrials are now well into the 650-685 area which this letter predicted in October would be the upside objective. However, as yet, the market shows no signs of deterioration. The breadth index continues to move ahead with the market and has even advanced on days when the averages have declined. Volume indications also remain favorable and there is no sign of a distributional top pattern. The plethora of investmen t funds probably is an important element in the present mar- ket. We mentioned this before in our letter of November 16th after the averages hadadvance over fifty points from the October lows. We said – Most of the seers who have now swung sharply to the bullish side of the fence now claim that the successful confrontation in Cuba has, in some magical way, made stocks worth more today than they were a month ago. This is, in our opinion, tenuous at best. The rise in stocks that followed Khrushchev's backdown is another one of a long chain of examples of the market's finding an excuse to do wha t it was in a technical position to do in the first place. A more valid explanation for both the magnitude and sharpness of the rise lies in the fantastic end of October, poised and waiting to enter the equity mar t.' that were, at the 0 After citing the sharp increase in time i ui i Y . utual funds and the increase in the short interest, the November 16th Ie 0110 e . h – What, however, does all this mean for investment policy at position of the investor. If he had the courag 0 , hi pends largely on the current e a ely invested position at the end of October, there is verY'little y essarY'for him to maintain this posi- tion. The rapidity of the position. They are, indeed, w . i that most investors are not in such a e 'WPortunity to add to holdings on any minor de- cline. The great dUfic decline is not like 0 any potential equity buyers in this position, any It is much more probable that a correction, if there is one, will nor' cope. Meanwhile, the upside objective of our technical wor continues to be 650-68 0 Dow. A large number of stocks have higher percentage upside potentials and, above ,it is probable that a large portion of the potential equity money mentioned above is still waiting to enter the market. In view of all this, those investors still having cash reserves are probably best off committing them at the present time. From what we can observe at the moment, there is still a large amount of money seek- ing investment at lower prices. It would appear that selling on balance on strength has con- tinued and cash holdings have increased. This indicates no drastic declines in prices until most of this potential investment money has been committed. It also indicates that, barring unforeseen international developments, the dramatic swings up and down that occurred in 1962 will not be repeated in 1963. It will be a much less dramatic year with the averages remaining in a relatively narrow trading area as compared to 1962. Probably, it will be wiser in 1963 to stress the price action and values of individual issues rather than the gyrations of the general market. The situation today is quite different than a year ago when the market was near the completion of a distributional top after a speculative binge that had carried many stocks to unwarranted heights. The May-June decline has corrected a good portion of the over-valuation and today the market appears to be in the process of forming a long-term accumulation pattern that needs a longer time period for completion. This will declining phases as well as advancing phases, but the swings will be more moderate than In 1962. Among issues in our recommended lists that appear attractive at these levels are Beaunit Mills (221/2), J. Ray McDermott (231/4) and Varian Associates (36 3/8) for price appreciation, and Crown Zellerb3.ch (49) and Gulf Oil (39 1/2) for quality and growt.h, nd National Can (12 1/4) as a low-priced speculation. In our complete recommended 11st issued January 4th we inadvertently omitted Chrysler (80) which we recommended in June at 41 1/8. Our present advice is Hold-Buy at 75.-70!1 EDMUND W. TABELL Dow-Jones Ind. 671. 60 Dow-Jones Rails 148. 68 WALSTON & CO. INC.' lllHrhct letl!r …. und under no circumstancc' IS to he COntl'lIed nn 'lITe. tu ,,('II 01 1 bnhrltnt'''11 tu lillY lin (,,lilltIC 11.'('1 I cd lu hel ('In The mClll1'lt\lI (ntnmed herein IS nut ,. to .,c(,l1rruy 01 ('umilletene-s lind Cut th, cur lint, nnol 111101('1 lin (1\ ('1I111Stllll( es I to he (()I1 … 1\ I bn hy \\'nlston & Cu. Inr All eprc;slOn…..r nJlllllon arc … uhJcrt to) (hung-e 1'lth'Hlt Iwlle \\'nl … t,m & Cn, h\(', IInll Off,ce, … DlIC(tnlb. Stml..hl,h.'I' lon,1 theroof. rlillchnKc. '(11 anrl mny hlnc nn mtelt!'t III the … hCICln 'th,,,, mlilket ICttCl' I IntClllled melcly II'S 11 /'Cl1cll1l, In (' mill rmmcntlll y on d.lv to ,I.IY m.lrkct new'l nUll not Il .Ilml,lcte Ad,lllllllnl IIlfUI mnliun \\ It II t ,,, nl\ 111C'l I eruled tn he! 1'111 Will he uPon rCf)ue.t \\ \ .()J