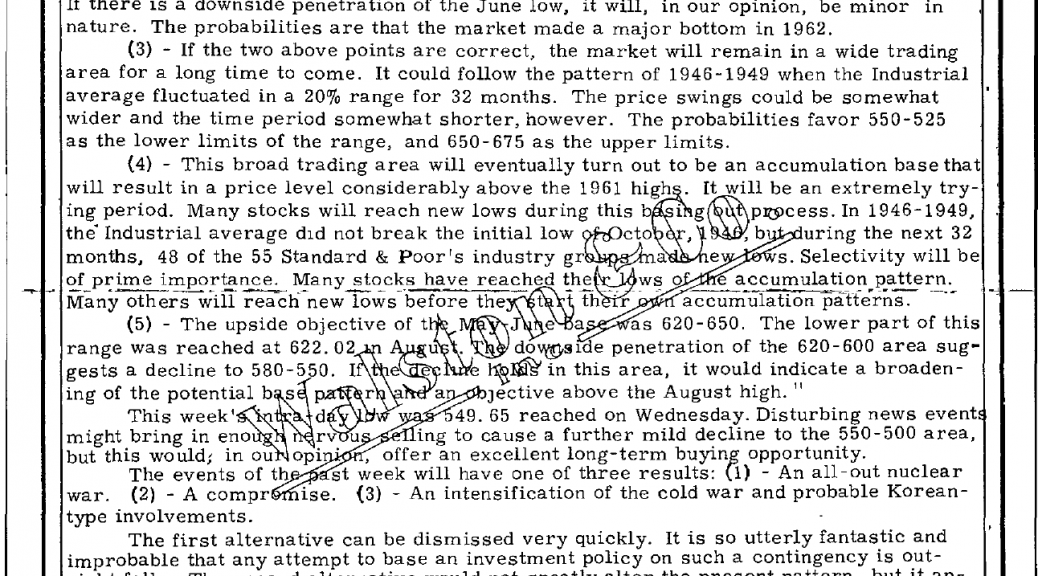 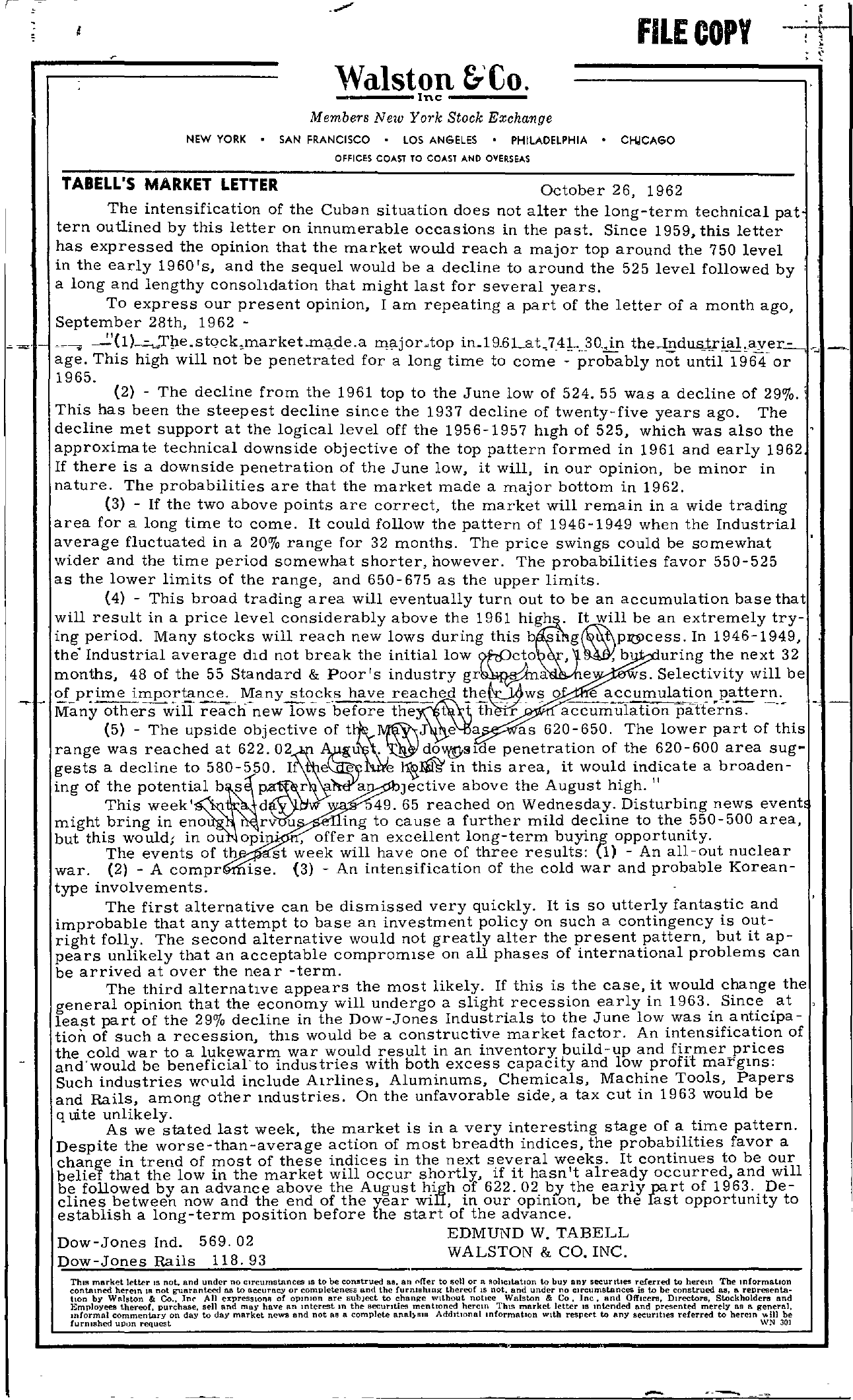 Walston &'Co. fiLE COpy .- 9—\.C,. ,, , , Members New York Stock Exchange NEW YORK SAN FRANCISCO LOS ANGELES PHILADELPHIA OFFICES COAST TO COAST AND OVERSEAS CHICAGO TABELL'S MARKET LETTER October 26, 1962 The intensification of the Cuban situation does not alter the long-term technical pat tern outlined by this letter on innumerable occasions in the past. Since 1959, this letter has expressed the opinion that the market would reach a major top around the 750 level in the early 1960's, and the sequel would be a decline to around the 525 level followed by a long and lengthy consohdation that might last for several years. To express our present opinion, I am repeating a part of the letter of a month ago, September 28th, 1962 – …-' —!..'(1)—. m;tjortop in.19.6Lat.74L 30,in the,.lndusiriaLaver- age. This high will not be penetrated for a long time to com-e -' probably not or 1965. (2) – The decline from the 1961 top to the June low of 524. 55 was a decline of 290/0. This has been the steepest decline since the 1937 decline of twenty-five years ago. The decline met support at the logical level off the 1956-1957 hIgh of 525, which was also the approxima te technical downside objective of the top pattern formed in 1961 and early 1962 If there is a downside penetration of the June low, it will, in our opinion, be minor in nature. The probabilities are that the market made a major bottom in 1962. (3) – If the two above points are correct, the market will remain in a wide trading area for a long time to come. It could follow the pattern of 1946-1949 when the Industrial average fluctuated in a 200/0 range for 32 months. The price swings could be somewhat wider and the time period somewhat shorter, however. The probabilities favor 550-525 as the lower limits of the range, and 650-675 as the upper limits. (4) – This broad trading area will eventually turn out to be an accumulation base that will result in a price level considerably above the 1961 It will be an extremely try- ing period. Many stocks will reach new lows during this b i In 1946-1949, the' Industrial average dId not break the initial low 'TftOc\01 b uring the next 32 months, 48 of the 55 Standard & Poor's industry e s. Selectivity will be ,!pr;ime l\.!any stocis have reached Many others will reach new lows before (5) – The upside objective of 0 th'M- accumulation patterns. . as 620-650, The lower part of this range was reached at 622. gests a decline to 580-550. I e e e penetration of the 620-600 area sugin this area, it would indicate a broaden- ing of the s a Jective above the August high. This week d 49.65 reached on Wednesday. Disturbing news event might bring in eno rv u ing to cause a further mild decline to the 550-500 area, but this would; in ou opi' ,offer an excellent long-term buying opportunity. The events of th st week will have one of three results (l) – An all-out nuclear war. (2) – A compr (3) – An intensification of the cold war and probable Korean- type involvements. The first alternative can be dismissed very quiCkly. It is so utterly fantastic and improbable that any attempt to base an investment policy on such a contingency is outright folly. The second alternative would not greatly alter the present pattern, but It appears unlikely that an acceptable compromIse on all phases of international problems can be arrived at over the nea r -term. The third alternative appears the most likely. If this is the case, it would change the general opinion that the economy will undergo a slight recession early in 1963 .. .at least part of the 290/0 decline in the Dow-Jones Industrials to the June low was In antiCIpa- tion of such a recession, thIS would be a constructive market factor. An intensification of the cold war to a lukewarm war would result in an inventory build-Up and firmer prices and'would be beneficial-to industries with both excess capacity and low profit margInS Such industries w('uld include AIrlines, Aluminums, Chemicals, Machine Tools, Papers and Rails, among other Industries. On the unfavorable side, a tax cut in 1963 would be quite unlikely. . As we stated last week, the market is in a very interesting stage of a time pattern. Despite the worse-than-average action of most breadth indices, the probabilities favor a change in trend of most of these indices in the next several weeks. It continues to be our belief that the low in the market will occur shortly, if it hasn't already occurred,and will be followed by an advance above the August high of 622.02 by the early part of 1963. Declines between now and the end of the year win, in our opimon, be the fast opportunity to establish a long-term position before the start of the advance. Dow-Jones Ind. 569.02 Dow-Jones Rails 118.93 EDMUND W. TABELL WALSTON & CO. INC. Thill market letter IS not. and under no clrcumstnnces IS to be construed as, an offer to sell or a sohCltatlOn to buy any SecUrtties referred to herem The mformatlon contained herem III not guRrant.cro tI.lI to accuracy or completeness and the furnlShlnK thereof IS not, and under no Circumstances is to be construed as, a repre!lenta- tiOn by Wnlston & Co., InC' All expresSiOns of opInion are subject to change Without notice Walston & Co, Inc, and Offlcera, Directors, Stockholders and ;mployees thereof, purchase, sell and may have nn mterest In the securities mentioned herCIn ThIS market letter IS Intended and presented merely as a general, Informal commentary on day to day market news and not 8S 8 complete ana!)sls Additional information With resPCl't to any securities referred to herein '\10111 be furnished UPlln request WN 301