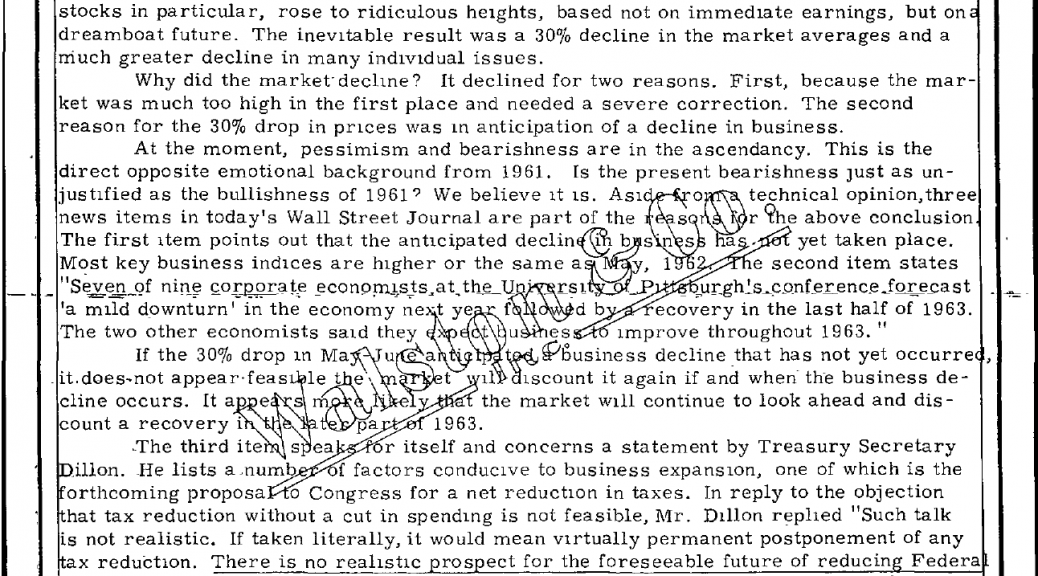 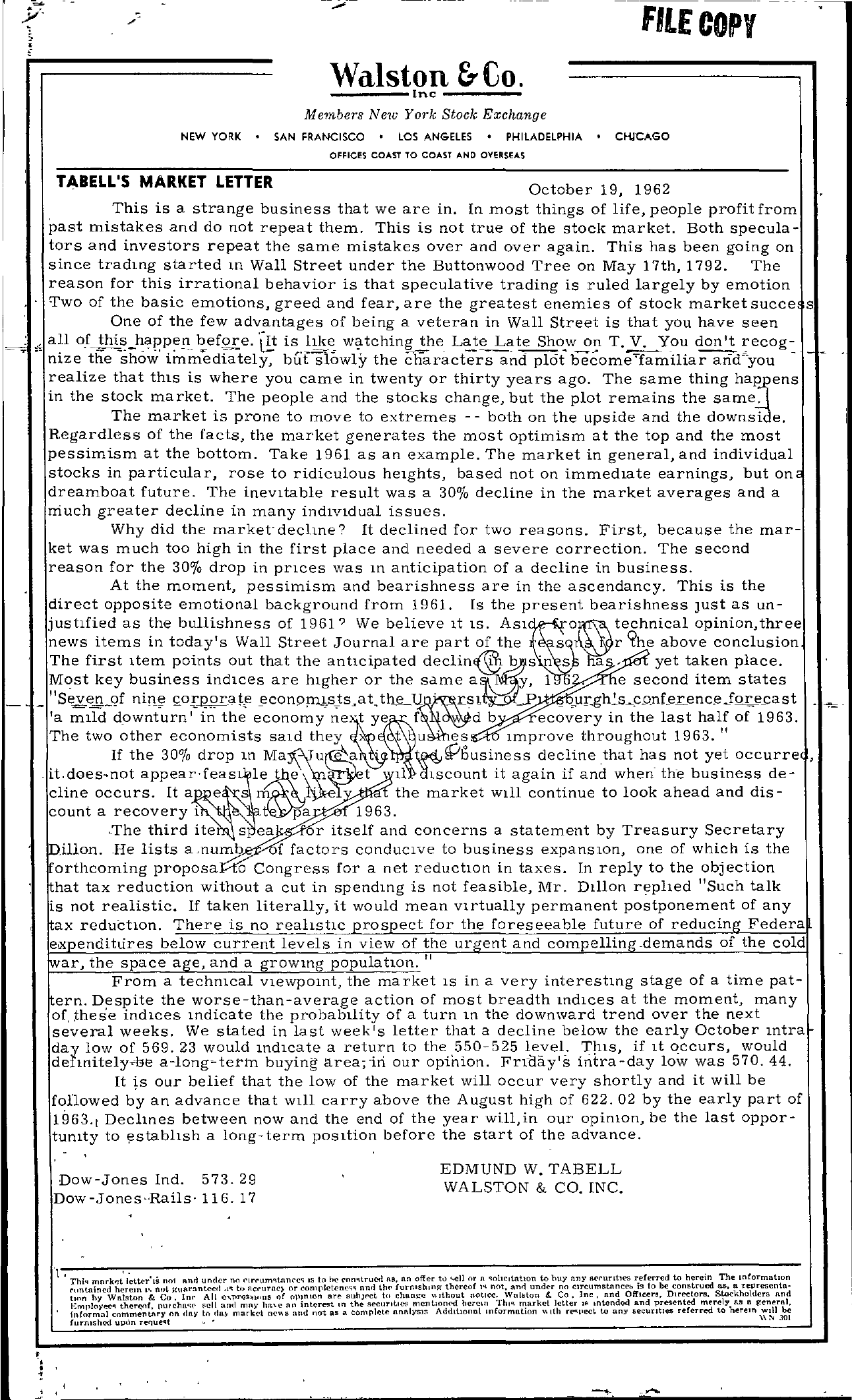 fILE COpy , Walston &Co. Inc Members N e1V York Stock Exchange NEW YORK SAN FRANCISCO LOS ANGELES PHILADELPHIA CH.lCAGO OFFICES COAST TO COAST AND OVERSEAS TABELL'S MARKET LETTER October 19, 1962 This is a strange business that we are in. In most things of life, people profit from past mistakes and do not repeat them. This is not true of the stock market. Both specula- tors and investors repeat the same mistakes over and over again. This has been going on since tradmg started 10 Wall Street under the Buttonwood Tree on May 17th, 1792. The reason for this irrational behavior is that speculative trading is ruled largely by emotion Two of the basic emotions, greed and fear, are the greatest enemies of stock market succe s One of the few advantages of being a veteran in Wall Street is that you have seen ' 'l!..t Late You mze the show Immedlately, but slowly the characters and plot become'familiar and-You realize that thlS is where you came in twenty or thirty years ago. The same thing in the stock market., The people and the stocks change, but the plot remains the same The market IS prone to move to extremes – – both on the upside and the downside. Regardless of the facts, the market generates the most optimism at the top and the most pessimism at the bottom. Take 1961 as an example. The market in general, and individual stocks in particular, rose to ridiculous helghts, based not on immediate earnings, but on dreamboat future, The inevltable result was a 30 decline in the market averages and a much greater decline in many indlvldual issues. Why did the market' decllne It declined for two reasons. First, because the mar- ket was much too high in the first place and needed a severe correction. The second reason for the 30 drop in pnces was 10 anticipation of a decline in business. At the moment, pessimism and bearishness are in the ascendancy. This is the direct opposite emotional background from 1961. Is the present bearishness Just as un- justified as the bullishness of 1961 We believe It IS. news items in today's Wall Street Journal are part of the s technical opinion,three above conclusion , The first Item points out that the anticipated Most key business indIces are hIgher or the same a b s'n s fia. yet taken place. y, 1 . e second item states -. – by The two other economists saId they Improve throughout 1963. If the 30 drop 10 decline that has not yet occurre , , it,doesnot appearfeas t \ 11 it again if and when'th'e business de- cline occurs. It a e s m ' the market WIll continue to look ahead and dis- count a recovery i pa 1963 . .The third ite s or itself and concerns a statement by Treasury Secretary .illon. He lists a .numb factors condUCIve to business expanslOn, one of which is the orthcoming proposa 0 Congress for a net reductlOn in taxes. In reply to the objection hat tax reduction without a cut in spendmg is not feasible, Mr. DIllon replled Such talk is not realistic. If taken literally, it would mean VIrtually permanent postponement of any ax reduchon. There is no reallstic ros ect for the foreseeable future of reducin Federa e,x endittires below current levels in view of the ur ent and compellin .demands of the cold ar, the space a e, and a rowmg POpulatlOn. From a techmcal vlewpomt, the market IS in a very interesting stage of a time pat- ern. Despite the worse-than-average action of most breadth mdlces at the moment, many of, these indIces Indicate the probabIlity of a turn In the downward trend over the next several weeks. We stated in last week's letter that a decline below the early October mtra day low of 569.23 would mdlcate a return to the 550-525 level. ThIS, if It occurs, would a-long-term buying area;'iri our opinion. Frraay's intra-day low was 570.44. It ts our belief that the low of the market will occur very shortly and it will be fonowed by an advance that WIll carry above the August high of 622.02 by the early part of 1963.1 Dechnes between now and the end of the year will,in our opimon, be the last opportumty to estabhsh a long-term pOSItion before the start of the advance. Dow-Jones Ind. 573,29 Dow -Jones,Rails' 116, 17 EDMUND W. TABELL WALSTON & CO. INC. '1 1101 Rnr) under no IS to he- ('on'ltrucn na, nn offer to ..ell or II '1ohcllnhon to buy any fl(,(,UrLtll;'s referred to herein The InformatIOn rntnined herem nut ,1; t.o acC'urnc) or and thf' furnishing thereof I not, anti under no Circumstance! IS to be construed as, Il represcntll- tmn hy Walston & Co, InC' All c,prCStlron5 of OPInIOn are suhJf'Ct to chan!!c …. Ithout notice. Wnlston &. Co, Inc, and Officers, DIrectors, Swckholders and I'mploye'; IlUlcha;(' and may an interest III the securities meatlonf'ri herein Thl !nrkct letter If! Intended and presented merely as a general, Informal commentary on day to oa) market ne…. s and not. as a complete flnnlY;;ls AddItIOnal III (ormatIOn …. Ith TCpect W any securities referred to herem furnished uptln