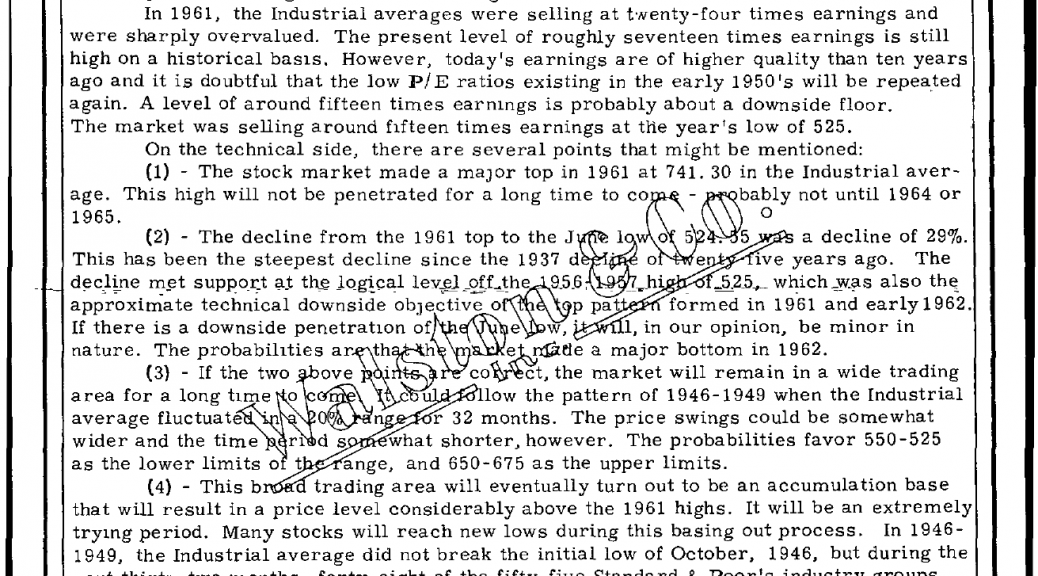 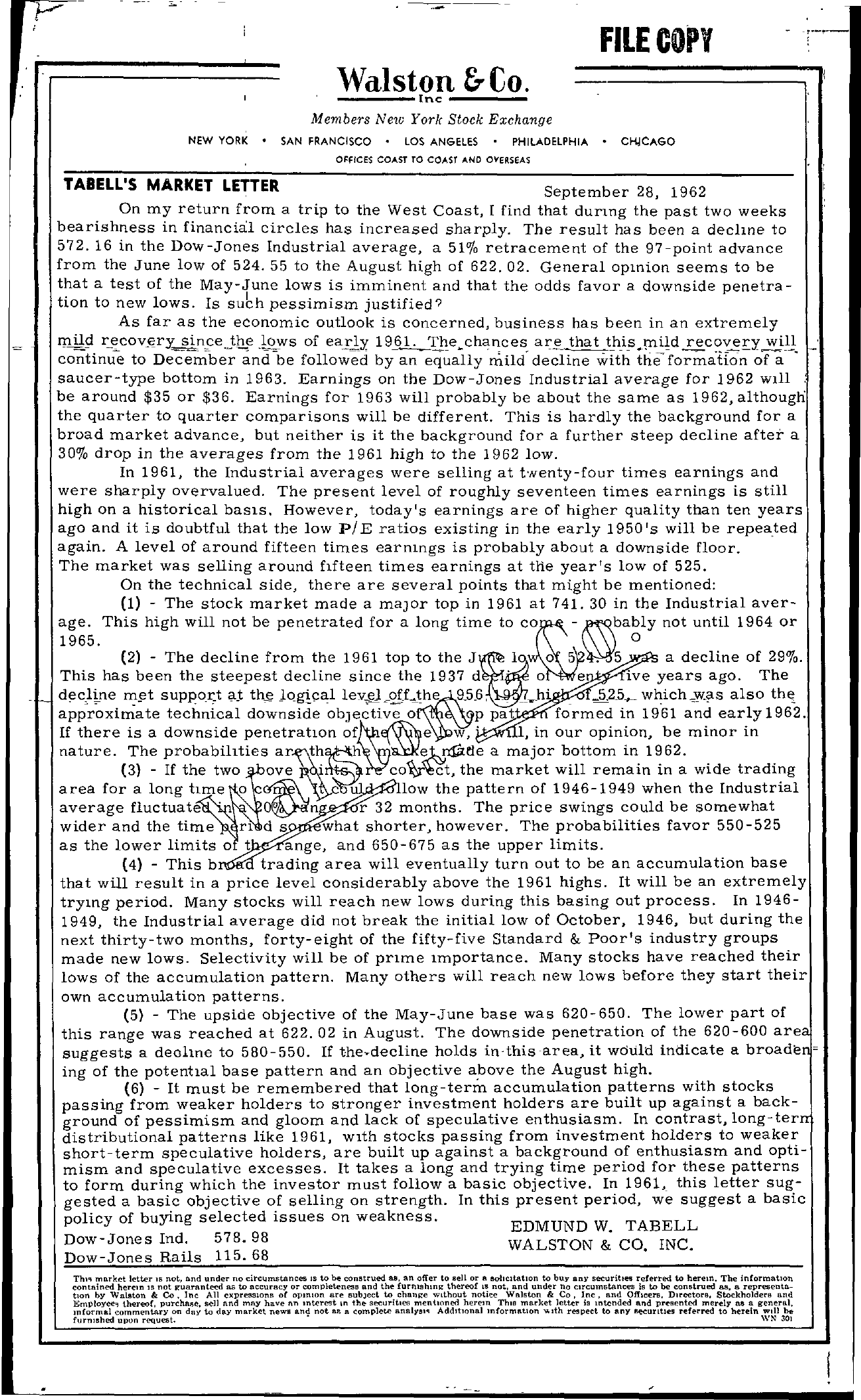 – FILE COpy Wdlston &Co. – Inc – – – – – Members N e, York Stock Exchange NEW YORK SAN FRANCISCO LOS ANGELES PHILADELPHIA CHJCAGO OJFICES COAST TO COAST AND OVERSEAS TABEll'S MARKET lETTER September 28, 1962 On my return from a trip to the West Coast, I find that dunng the past two weeks bearishness in financial circles has increased sharply. The result has been a dechne to 572.16 in the Dow-Jones Industrial average, a 51 retracement of the 97-point advance from the June low of 524.55 to the August high of 622.02. General opmion seems to be that a test of the May-June lows is imminent and that the odds favor a downside penetra- tion to new lows. Is subh pessimism justified As far as the economic outlook is concerned, business has been in an extremely !pild .lows of earJ.Y 19..L….The.chances ar. that this.mild ree0Y.EY wil! continue to December and be followed by an equally mild- decline with tlie formatIon of -it saucer-type bottom in 1963. Earnings on the Dow-Jones Industrial average for 1962 wIll be around 35 or 36. Earnings for 1963 will probably be about the same as 1962,althougli the quarter to quarter comparisons will be different. This is hardly the background for a broad market advance, but neither is it the background for a further steep decline after a 30 drop in the averages from the 1961 high to the 1962 low. In 1961, the Industrial averages were selling at twenty-four times earnings and were sharply overvalued. The present level of roughly seventeen times earnings is still high on a historical baSIS. However, today's earnings are of higher quality than ten years ago and it is doubtful that the low PiE ratios existing in the early 1950's will be repeated again. A level of around fifteen times earmngs is probably about a downside floor. The market was selling around fifteen times earnings at the year's low of 525. On the technical side, there are several points that might be mentioned (1) – The stock market made a maJor top in 1961 at 741. 30 in the Industrial aver- age. This high will not be penetrated for a long time to 1965. not until 1964 or 0 (2) – The decline from the 1961 top to the 0 5 .5 a decline of 29. This has been the steepest decline since the 1937 d . 0 e ive years ago. The rr!!t support aj; approximate technical downside obJective 0 956 . . 5.254 also p pat formed in 1961 and earlyl962. If there is a downside penetratlOn w,' 1, in our opinion, be minor in nature. The probabillties (3) – If the two ove i a major bottom in 1962. the market will remain in a wide trading area for a long time 0 c u low the pattern of 1946-1949 when the Industrial average fluctuate r 32 months. The price swings could be somewhat wider and the time d s what shorter, however. The probabilities favor 550-525 as the lower limits ange, and 650-675 as the upper limits. (4) – This b trading area will eventually turn out to be an accumulation base that will result in a price level considerably above the 1961 highs. It will be an extremely trymg period. Many stocks will reach new lows during this basing out process. In 1946- 1949, the Industrial average did not break the initial low of October, 1946, but during the next thirty-two months, forty-eight of the fifty-five Standard & Poor's industry groups made new lows. Selectivity will be of pnme Importance. Many stocks have reached their lows of the accumulation pattern. Many others will reach new lows before they start their own accumulation patterns. (5) – The upside objective of the May-June base was 620-650. The lower part of this range was reached at 622.02 in August. The downside penetration of the 620-600 are suggests a declme to 580-550. If the.decline holds inthisarea, it wdtild indicate a broade ing of the potenhal base pattern and an objective above the August high. (6) – It must be remembered that long-term accumulation patterns with stocks passing from weaker holders to stronger investment holders are built up against a back- ground of pessimism and gloom and lack of speculative enthusiasm. In contrast, long-ter distributional patterns like 1961, With stocks passing from investment holders to weaker short-term speculative holders, are built up against a background of enthusiasm and opti- mism and speculative excesses. It takes a long and trying time period for these patterns to form during which the investor must follow a basic objective. In 1961, this letter sug- gested a basic objective of selling on strength. In this present period, we suggest a basic policy of buying selected issues on weakness. Dow-Jones Ind. 578.98 Dow-Jones Rails 115. 68 EDMUND W. TABELL WALSTON & CO. INC. Thl'l mnrket letter IS not, and under no cilCllmSwnces IS to be construed 8S. an offer to sell or l\ soliCitation to buy any securities referred to hereIn. The information contained herem lS not Rua.ranteed as to accuracy or completeness and the furnlshlnl'! thereof IS not, and under no Circumstances \s to be construed 88, a representa- tIOn by WnLston & Co, Inc All expreSSIOns or opInion are subJect to ChalH!;e WIthout notice Wnlston & Co, Inc, and Officers, DITC(!tOrB, Stockholders and Employee, thereof, purchru;e, sell nnd may have an mterest In the securities mentioned herem ThIS market letter is Intended a.nd presented merely as a general. Informal commentary on dny to day market news and not as a complete 8ona1Y61'1 AdditIonal mformatlOn ' Ith respect to any referred to herein Will be furnished upon r e q u e s t . ' WN 301