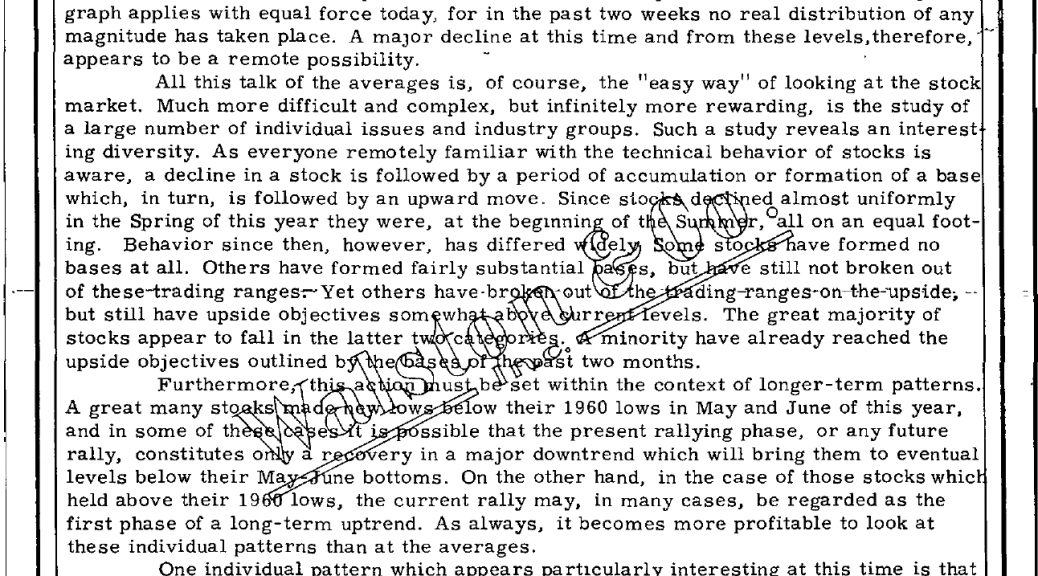 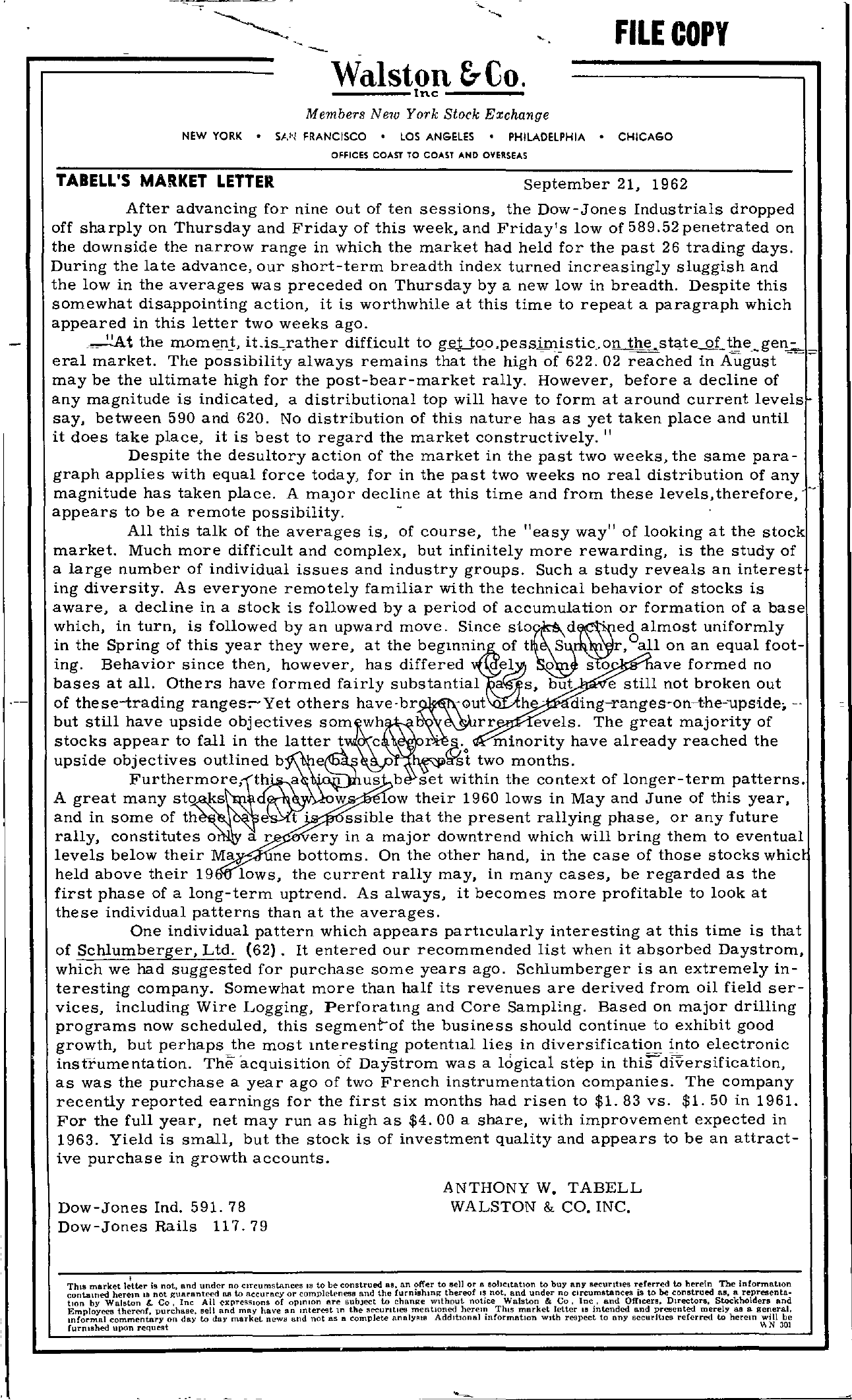 FILE COPY Walston &CO. —-Inc —– Members N 810 York Stock EXchange NEW YORK 51', FRANCISCO LOS ANGELES PHILADELPHIA CHICAGO OFFICES COAST TO COAST AND OVERSEAS TABEll'S MARKET lETTER september 21, 1962 After advancing for nine out of ten sessions, the Dow-Jones Industrials dropped off sha rply on Thursday and Friday of this week, and Friday's low of 589.52 penetrated on the downside the narrow range in which the market had held for the past 26 trading days. During the late advance, our short-term breadth index turned increasingly sluggish and the low in the averages was preceded on Thursday by a new low in breadth. Despite this somewhat disappointing action, it is worthwhile at this time to repeat a paragraph which appeared in this letter two weeks ago. the momenJ, difficult to get too.pessimistic.on eral market. The possibility always remains that the high of 622.02 reached in A-ugust —- may be the ultimate high for the post-bear-market rally. However, before a decline of any magnitude is indicated, a distributional top will have to form at around current levels say, between 590 and 620. No distribution of this nature has as yet taken place and until it does take place, it is best to regard the market constructively. Despite the desultory action of the market in the past two weeks, the same para- graph applies with equal force today, for in the past two weeks no real distribution of any magnitude has taken place. A maJor decline at this time and from these levels,therefore,'-' appears to be a remote possibility. All this talk of the averages is, of course, the easy way of looking at the stock market. Much more difficult and complex, but infinitely more rewarding, is the study of a large number of individual issues and industry groups. Such a study reveals an interest ing diversity. As everyone remotely familiar with the technical behavior of stocks is aware, a decline in a stock is followed by a period of accumulation or formation of a base which, in turn, is followed by an upward move. Since in the Spring of this year they were, at the begmnin of t S almost uniformly r,Oall on an equal foot- ing. Behavior since then, however, has differed e.!Jj 0 s o a v e formed no bases at all. Others have formed fairly substantial but e still not broken out of these-trading ranges–Yet others 'h ding-ranges-on-the-ups-ide; -. but still have upside objectives rr evels. The great majority of stocks appear to fall in the latter t c r' minority have already reached the upside objectives outlined b e two months. Furthermore, thO a ' us b set within the context of longer-term patterns. A great many sto s w ow their 1960 lows in May and June of this year, and in some of th ssible that the present rallying phase, or any future rally, constitutes 0 a r ery in a major downtrend which will bring them to eventual levels below their Ma ne bottoms. On the other hand, in the case of those stocks whic held above their 19 lows, the current rally may, in many cases, be regarded as the first phase of a long-term uptrend. As always, it becomes more profitable to look at these individual patterns than at the averages. One individual pattern which appears partlcularly interesting at this time is that of Schlumberger, Ltd. (62). It entered our recommended list when it absorbed Daystrom, which we had suggested for purchase some years ago. Schlumberger is an extremely in- teresting company. Somewhat more than half its revenues are derived from oil field ser- vices, including Wire Logging, Perforatlng and Core Sampling. Based on major drilling programs now scheduled, this segment-of the business should continue to exhibit good growth, but perhaps the most mteresting potential lies in diversificati().!! into electronic ins trume nta tion. The acquisition of Daystrom was a logical step in thisdiversification, as was the purchase a year ago of two French instrumentation companies. The company recently reported earnings for the first six months had risen to 1. 83 vs. 1. 50 in 1961. For the full year, net may run as high as 4.00 a share, with improvement expected in 1963. Yield is small, but the stock is of investment quality and appears to be an attract- ive purchase in growth accounts. Dow-Jones Ind. 591. 78 Dow-Jones Rails 117.79 ANTHONY W. TABELL WALSTON & CO. INC. ThiS market is not, and under no Circumstances 18 to be construed 88. an ffer to sell or a soliCitatIOn to buy any secUrities rc!erred to herein The information contained herem IS not M to accuracy or completeness and the urnlshlllj;!' thereof IS not, and under no Circumstances IS to be construed as, a representa- lion by Walston '- Co, Inc All expreSSIOns of Opinion are subJect to chanp;e WIthout notice Walston & Co, Inc, and Qfflcel'1l. Directors, Stockholders and Employees thercof, purchase, sellllnd mny have an mten!5t In the securities mentIoned ThiS market letter 19 intended and presented merely as a general, mformal commentnry on day to day market newlI and not as a complete AdditIonal mformatlon With respect to any securities -referred to herem will be rurnlshed upon request V. N J01