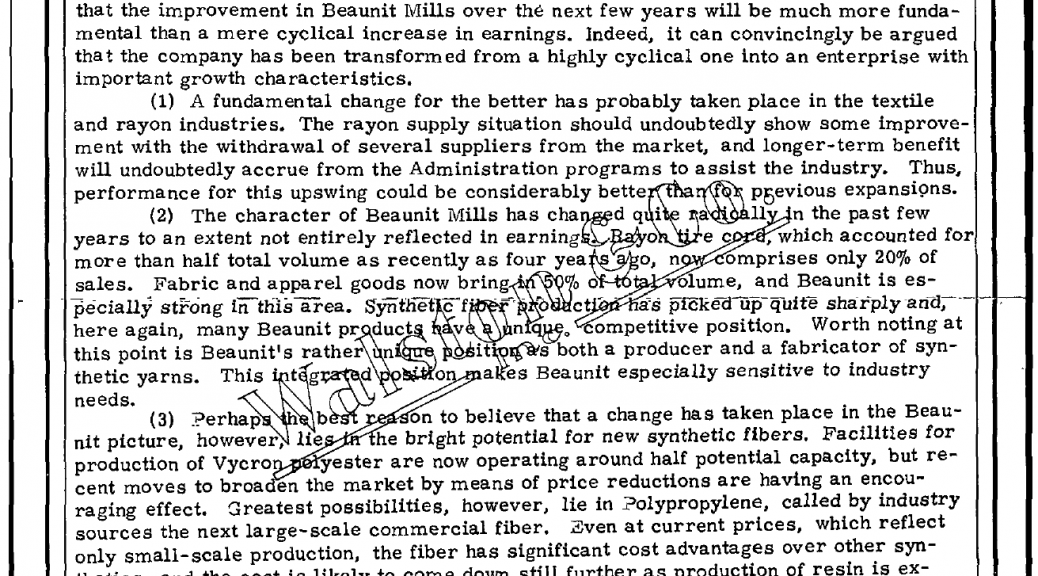 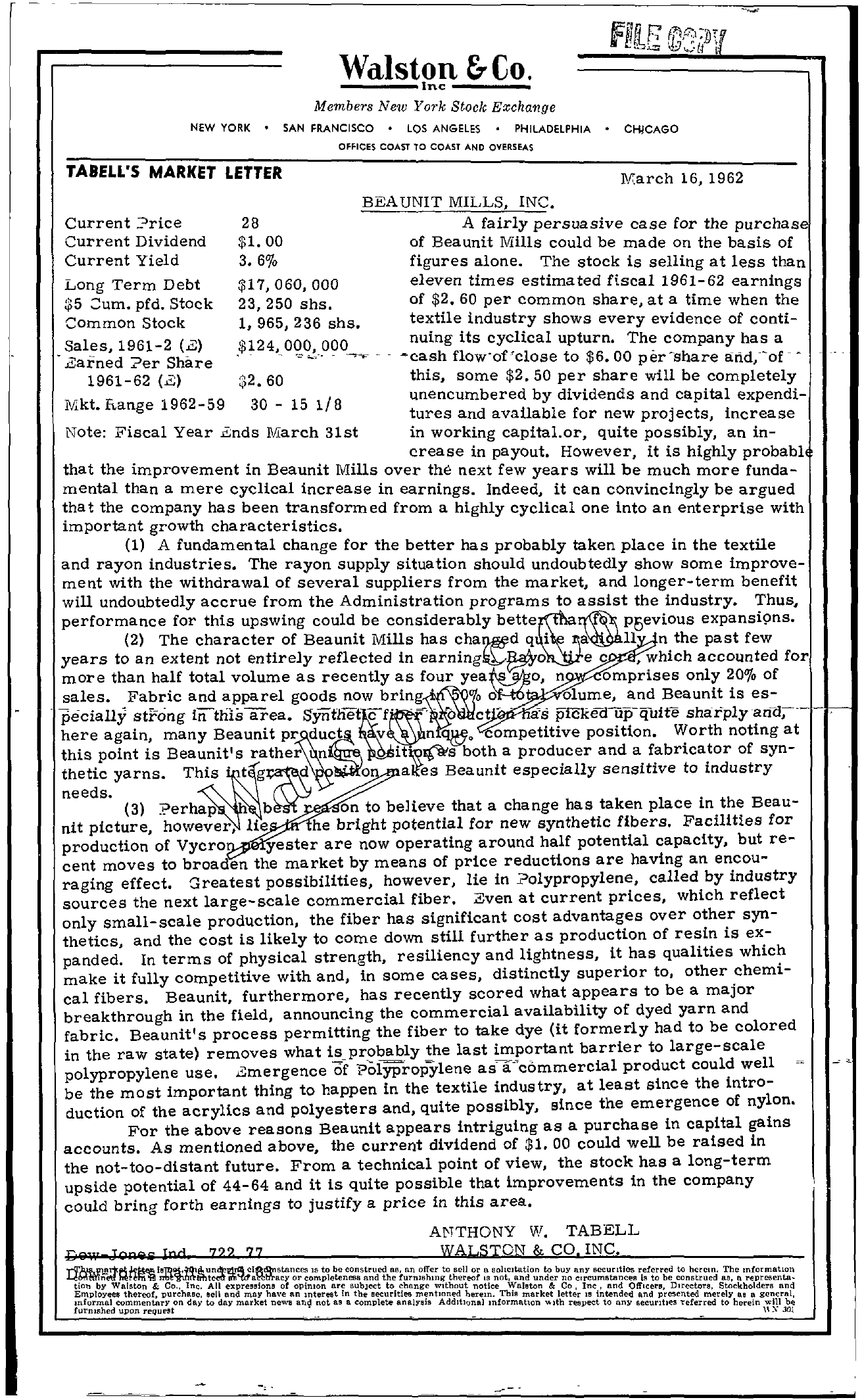 Walston &- Co, Inc Members N Y O1-k Stock Exchange NEW YORK SAN FRANCISCO LOS ANGELES PHILADELPH'A CKlCAGO OFFICES COAST TO COAST AND OVERSEAS TABEll'S MARKET lETTER l\!.arch 16,1962 Current rice 28 Current Dividend 1. 00 A fairly persuasive case for the purchasE of Beaunit Mills could be made on the basis of Current Yield 3. 6 figures alone. The stock is selling at less than Long Term Debt 17, 060, 000 eleven times estimated fiscal 1961-62 earnings 5 um. pfd. Stock 23,250 shs. of 2.60 per common share, at a time when the Common Stock 1,965,236 shs. textile industry shows every evidence of conti- Sales, 1961-2 (E) 124, 000, 000 nuing its cyclical upturn. The company has a -Earned er Share . .. .. -cash flow-of'close to 6.00 per-share and;-of . 1961-62 (E) 2.60 this, some 2.50 per share will be completely JVIkt. Ii,ange 1962-59 30 15 1/8 . unencumbered by dividends and capital expenditures and available for new projects, increase Note Flscal Year Ends 31st in working capital.or, quite possibly, an in- . crease in payout. However, it is highly probabl that the lmprovement in Beaunit Mills over the next few years will be much more funda- mental than a mere cyclical increase in earnings. Indeed, it can convincingly be argued t the company has been transformed from a highly cyclical one into an enterprise with lmportant growth characteristics. (1) A fundamental change for the better has probably taken place in the textile and rayon industries. The rayon supply situation should undoubtedly show some improvement with the withdrawal of several suppliers from the market, and longer-term benefit will undoubtedly accrue from the Administration programs to assist the industry. Thus, performance for this upswing could be considerably P5evious expansi9ns. (2) The character of Beaunit Mills has chaMd q i n the past few years to an extent not entirely reflected in . e c , which accounted for more than half total volume as recently as four sales. Fabric and apparel goods now n omprises only 200/0 of dit6t olume, and Beaunit is es- pecially strong fnthls area. '0 ct -. as picl!eG1Ip-qufte sharply ana;—-f- here again, many Beaunit this point is Beaunit's rather n ompetitive position. Worth noting at itW!(S!s both a producer and a fabricator of syn- thetic yarns. t . 0 aIres Beaunit especially sensitive to industry needs. (3) erhap b on to believe that a change has taken place in the Beau- nit picture, however, lie he bright potential for new synthetic fibers. Facilities for production of Vycro yester are now operating around half potential capacity, but re- cent moves to broaden the market by means of price reductions are having an encou- raging effect. Greatest possibilities, however, lie in olypropylene, called by industry sources the next large-scale commercial fiber. Even at current prices, which reflect only small-scale production, the fiber has significant cost advantages over other syn- thetics, and the cost is likely to come down still further as production of resin is ex- panded. In terms of physical strength, resiliency and lightness, it has qualities which make it fully competitive with and, in some cases, distinctly superior to, other chemi- cal fibers. Beaunit, furthermore, has recently scored what appears to be a major breakthrough in the field, announcing the commercial availability of dyed yarn and fabric. Beaunit's process permitting the fiber to take dye (it formerly had to be colored in the raw state) removes what isprobably the last important barrier to large-scale polypropylene use. .2mergence of Polypropylene as a–commercial product could well be the most important thing to happen in the textile industry, at least since the intro- duction of the acrylics and polyesters and, quite possibly, since the emergence of nylon. For the above reasons Beaunit appears intriguing as a purchase in capital gains accounts. As mentioned above, the current dividend of 1. 00 could well be raised in the not-too-distant future. From a technical point of view, the stock has a long-term upside potential of 44-64 and it is quite possible that improvements in the company could bring forth earnings to justify a price in this area. Al'iTHONY W. TABELL EQUT .;tQR''' Ind 7 22 77 WALSTON & CO, INC. ciQdbtstances IS to be construed as, an offer to sell or a sohcltation to buy any secunti(!S referred to hereLn The mfonnatlOn In 'lNn't'tibtC!O' or completeness and the furnlahlllg thereof IS not, and under no Is to be construed' as a representa. tlon by Walston & Co Inc. All expressions of opimon are subJect to change Without notice Walston & Co Inc and OffLcers Directors SU;ckholders and befi thereof. purchase, orbS dcommentnrY on day Bell and may have an to day market nev.'8 mterest In not as a the securities mentioned herem. This market letter IS complete analysis AddltJonal mformatlon dth rE!Bpect to uny and p'rcsented m'erelY Beeuntles referred to a.e general will urnls e upon request X 301