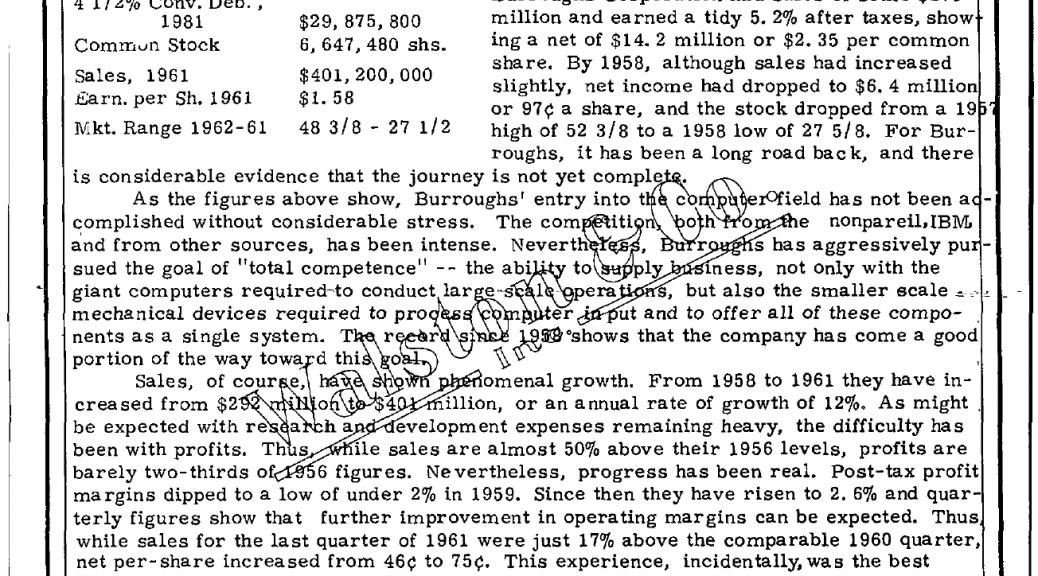 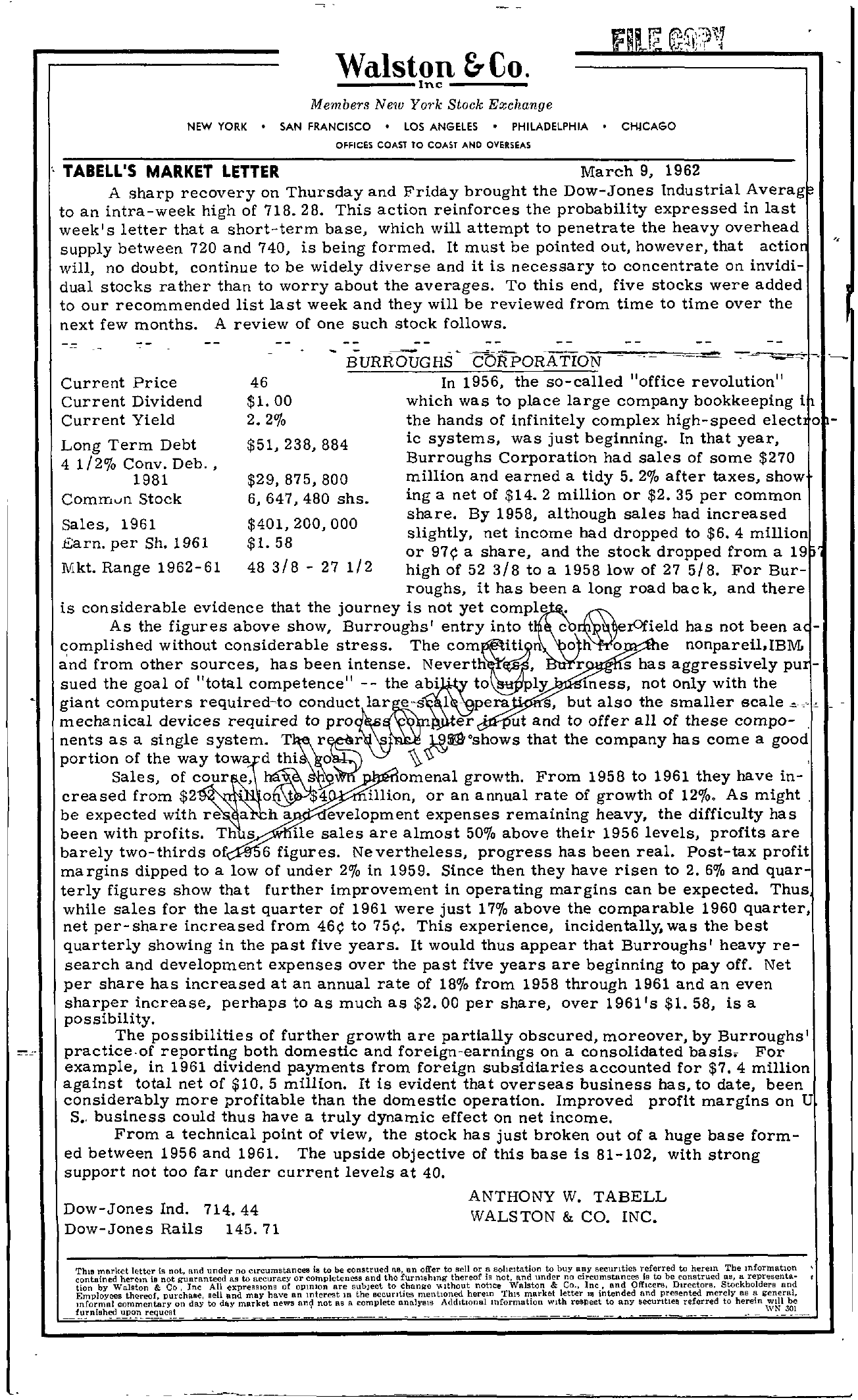 Walston &Co. Members New YQok Stock Exchange NEW YORK SAN FRANCISCO LOS ANGELES PHILADELPHIA CH.JCAGO OFFICES COAST TO COAST AND OVERSEAS TABELL'S MARKET LETTER March 9, 1962 A sharp recovery on Thursday and Friday brought the Dow-Jones Industrial Averag to an intra-week high of 718.28. This action reinforces the probability expressed in last week's letter that a short-term base, which will attempt to penetrate the heavy overhead supply between 720 and 740, is being formed. It must be pointed out, however, that actio will, no doubt, continue to be widely diverse and it is necessary to concentrate on invidi- dual stocks rather than to worry about the averages. To this end, five stocks were added to our recommended list last week and they will be reviewed from time to time over the next few months. A review of one such stock follows. Current Price Current Dividend 46 1. 00 In 1956, the so-called office revolution which was to place large company bookkeeping i Current Yield Long Term Debt 4 1/2 Conv. Deb. , 1981 Commun Stock Sales, 1961 Earn. per Sh. 1961 Mkt. Range 1962-61 2.2 51,238,884 29,875,800 6, 647, 480 shs. 401,200,000 1. 58 483/8 – 27 1/2 the hands of infinitely complex high-speed elect 0 ic systems, was just beginning. In that year, Burroughs Corporation had sales of some 270 million and earned a tidy 5. 2 after taxes, show ing a net of 14. 2 million or 2.35 per common share. By 1958, although sales had increased slightly, net income had dropped to 6.4 million or 97 a share, and the stock dropped from a 19 high of 52 3/8 to a 1958 low of 27 5/8. For Bur- roughs, it has been a long road bac k, and there is considerable evidence that the journey is not yet As the figures above show, Burroughs' entry into t co ezOfield has not been a c;omplished without considerable stress. The cometin e nonpareil,IBM and from other sources, has been intense. Nevertli , r s has aggressively pu sued the goal of total competence — the a m ito ly mess, not only with the giant computers required-to conduct 1 – pera s, but also the smaller scale mechanical devices required to er' ut and to offer all of these compo- nents as a single system. portion of the way towa d thi 0 UlWshows that the company has come a good ;''''' , Sales, of cour e, omenal growth. From 1958 to 1961 they have in- creased from 2 . illion, or an annual rate of growth of 12. As might be expected with re a h a evelopment expenses remaining heavy, the difficulty has been with profits. Thus ile sales are almost 50 above their 1956 levels, profits are barely two-thirds of. 6 figures. Nevertheless, progress has been real. Post-tax profit margins dipped to a low of under 2 in 1959. Since then they have risen to 2.6 and quar- terly figures show that further improvement in operating margins can be expected. Thus while sales for the last quarter of 1961 were just 17 above the comparable 1960 quarter, net per- share increased from 46 to 75. This experience, incidentally, was the best quarterly showing in the past five years. It would thus appear that Burroughs' heavy re- search and development expenses over the past five years are beginning to payoff. Net per share has increased at an annual rate of 18 from 1958 through 1961 and an even sharper increase, perhaps to as much as 2.00 per share, over 1961's 1. 58, is a possibility. The possibilities of further growth are partially obscured, moreover, by Burroughs' practice.of reporting both domestic and foreign-earnings on a consolidated basis. For example, in 1961 dividend payments from foreign subsidiaries accounted for 7.4 million against total net of 10. 5 million. It is evident that overseas business has, to date, been considerably more profitable than the dOmestic operation. Improved profit margins on U S. business could thus have a truly dynamic effect on net income. From a technical point of view, the stock has just broken out of a huge base form- ed between 1956 and 1961. The upside objective of this base is 81-102, with strong support not too far under current levels at 40. Dow-Jones Ind. 714.44 Dow-Jones Rails 145.71 ANTHONY W. TABELL WALSTON & CO. INC. This market i(!tter is not, and under no circumstances is to be construed ns, nn offer to sell or sohcltation to buy 8!'Y securlties referred to herem The mformatlOn contained herem iB not guaranteed as to accuracy or complcteness and the furnlshmg thereof IS not, and under no Cllcumstunces Is to be construed as, 11. representa- tion by Walston & Co Inc All expreSSlons of opInion are subJect to change notIce Walston & Co., Inc, and Officers, Directors, Stockholders and Employaes thQreof sell and may have an Interest In the secuflties mentlOned herem Thl; market letter IS intended and presented merely as 11. general, Informal on day to d&.y market news anq. not as a complete analYSIS AdditIOnal mformation With resPect to any sOCurltlcB referred to herein Will be . , –.