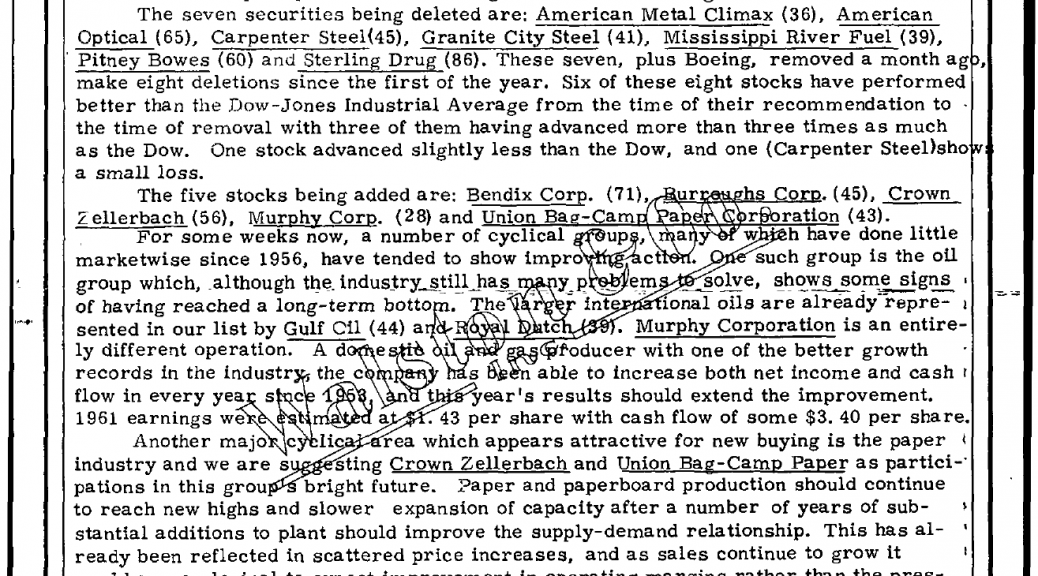 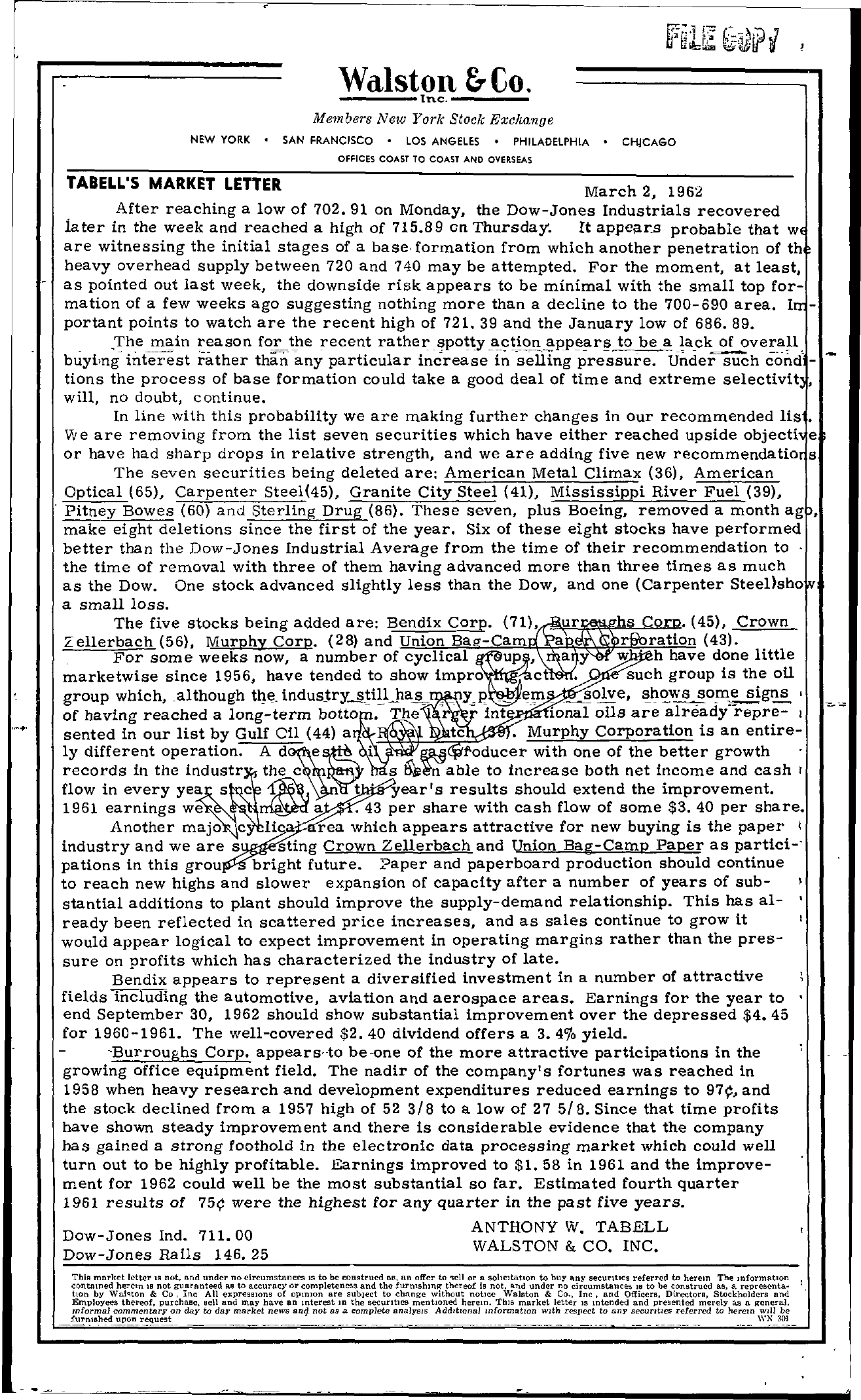 NEW YORK Walston &- Co. ———Inc.——— Members New York Stock Exchange SAN FRANCISCO LOS ANGELES PHILADELPHIA CH.JCAGO OFFICES COAST TO COAST AND OVERSEAS TABELL'S MARKET LETTER March 2, 1962 After reaching a low of 702.91 on Monday, the Dow-Jones Industrials recovered later in the week and reached a high of 715.89 on Thursday'. It appears probable that w are witnessing the initial stages of a base, formation from which another penetration of th heavy overhead supply between 720 and 740 may be attempted. For the moment, at least, as pointed out last week, the downside risk appears to be minimal with the small top for- mation of a few weeks ago suggesting nothing more than a decline to the 700-690 area. I portant points to watch are the recent high of 721. 39 and the January low of 686. 89. ,The ma,in reason recent ratherspotty to be a lack of buyi'ng- interest rather than any particular increase in 'selling pressure. UrulerSuCh cond' – tions the process of base formation could take a good deal of time and extreme selectivit will, no doubt, continue. In line with this probability we are making further changes in our recommended lis . We are removing from the list seven securities which have either reached upside objecti e or have had sharp drops in relative strength, and we are adding five new recommendatio s The seven securities being deleted are American Metal Climax (36), American Optical (65), Carpenter Stee1(45), Granite City Steel (41), Mississippi River Fuel (39), Pitney Bowes (60) and Sterling Drug (86). These seven, plus Boeing, removed a month ag , make eight deletions since the first of the year. Six of these eight stocks have performed better than the Dow-Jones Industrial Average from the time of their recommendation to . the time of removal with three of them having advanced more than three times as much as the Dow. One stock advanced slightly less than the Dow, and one (Carpenter Steel)sho a small loss. The five stocks being added are Bendix Corp. Zellerbach (56), Murphy Corp. (28) and Union Ba -Cam e, For some weeks now, a number of cyclical p , a ay marketwise since 1956, have tended to show impro ct group which,although the. , of having reached a long-term sented in our list by Gulf eil (44) a r int ional oils are already repre- l t c . Murphy Corporation is an entire- ly different operation. A f'oducer with one of the better growth . records in the industr ,the c s able to increase both net income and cash I flow in every yea c, t' year's results should extend the improvement. 1961 earnings we a . 43 per share with cash flow of some 3.40 per share. Another majo lic rea which appears attractive for new buying is the paper l industry and we are sting Crown Zellerbach and Union Bag-Camp Paper as partici-' pations in this grou bright future. 2aper and paperboard production should continue to reach new highs and slower expansion of capacity after a number of years of sub- stantial additions to plant should improve the supply-demand relationship. This has al- ready been reflected in scattered price increases, and as sales continue to grow it would appear logical to expect improvement in operating margins rather than the pres- sure on profits which has characterized the industry of late. Bendix appears to represent a diversified investment in a number of attractive fields including the automotive, aviation and aerospace areas. Earnings for the year to end September 30, 1962 should show substantial improvement over the depressed 4.45 for 1960-196l. The well-covered 2.40 dividend offers a 3.40/0 yield. -Burroughs Corp. appears-to be-one of the more attractive participations in the growing office equipment field. The nadir of the company's fortunes was reached in 1958 when heavy research and development expenditures reduced earnings to 97, and the stock declined from a 1957 high of 52 3/8 to a low of 27 5/8. Since that time profits have shown steady improvement and there is considerable evidence that the company has gained a strong foothold in the electronic data processing market which could well turn out to be highly profitable. Earnings improved to 1. 58 in 1961 and the improve- ment for 1962 could well be the most substantial so far. Estimated fourth quarter 1961 results of 75 were the highest for any quarter in the past five years. Dow-Jones Ind. 71l. 00 Dow-Jones Rails 146. 25 ANTHONY W. TABELL WALSTON & CO. INC. This market Ictt!r IS not, and under no Circumstances IS to be construed as, an offer to o;ell or a SoliCitatIon to buy any secUrities referred to herem The mformatIon conmlned herC1n IS not gunranteed as to accuracy or completeness and the furlllshml!' thereof is not, and under no circumstances IS to be construed as, a representation by Wal'lton & Co, Inc AU I;lxpreSBlons of OPlnlOn are subject to change without notice Walston & Co., Inc, and Officers, Directors, Stockholders and thereof, purchase, sell and may have an mterest m the secUrIties mentlOned herem. ThiS market letter IS mtended and presented merely as a general, mformal commentary on day to da)' market news and not as a complete analYSIS AddltfonaJ mformatlOn With respeet to o.ny seeurltzes referred to herem Will be .. . .. . \\,N 301 ..- …………………………..