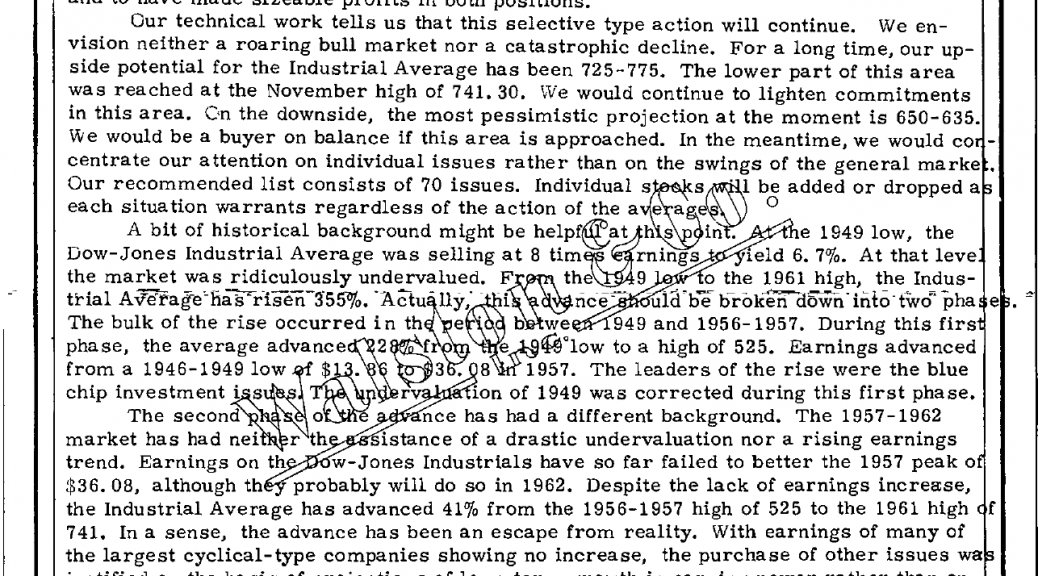 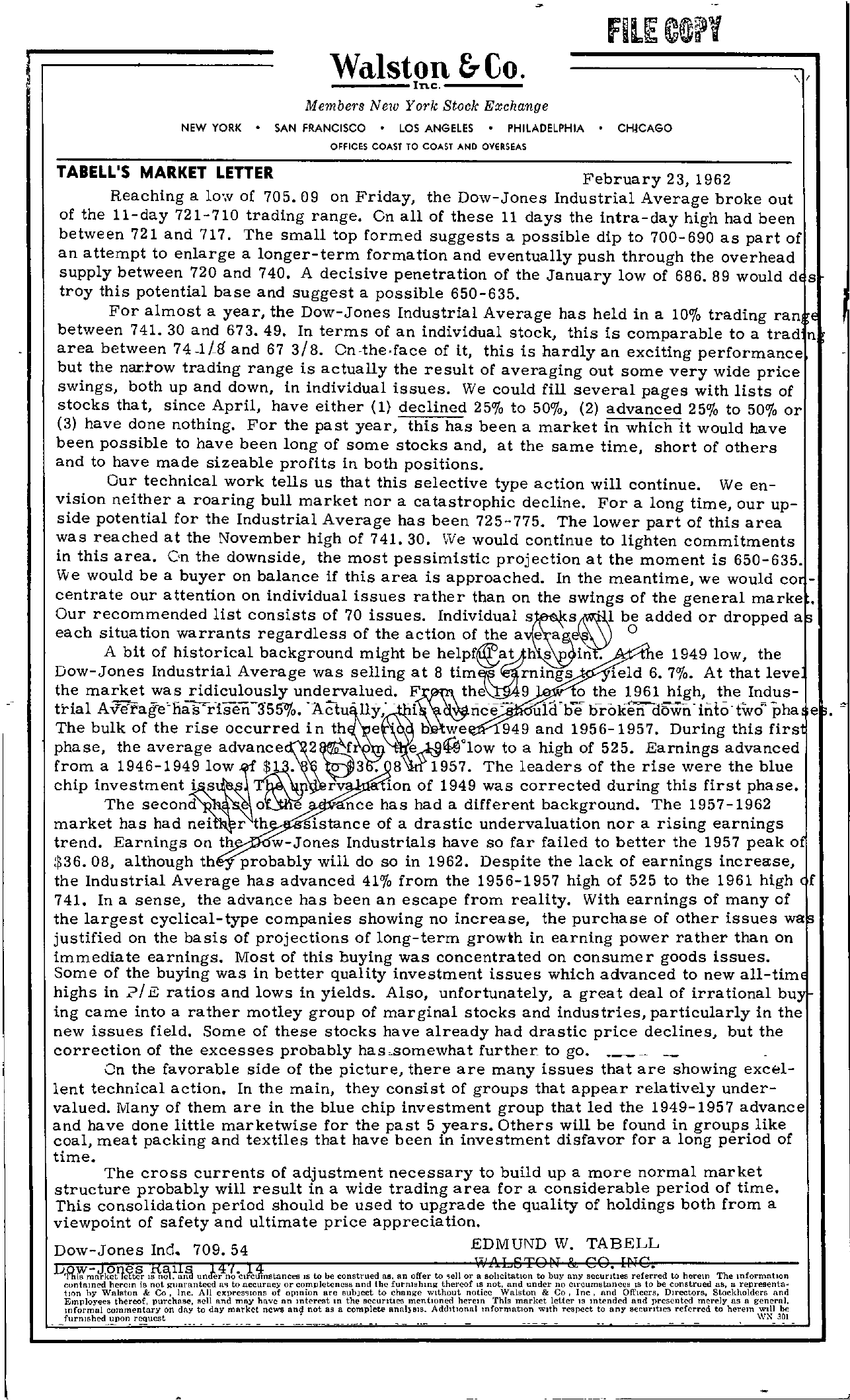 Walston &Co. Inc. ;,…-…..;– Members New York Stock Exchange NEW YORK SAN FRANCISCO LOS ANGELES PHILADELPHIA CHlCAGO OFFICES COAST TO COAST AND oveRSEAS \, TABEll'S MARKET lETTER February 23, 1962 Reaching a lo',v of 705.09 on Friday, the Dow-Jones Industrial Average broke out of the 11-day 721-710 trading range. Cn all of these 11 days the intra-day high had been between 721 and 717, The small top formed suggests a possible dip to 700-690 as part of an attempt to enlarge a longer-term formation and eventually push through the overhead supply between 720 and 740. A decisive penetration of the January low of 686.89 would d s troy this potential base and suggest a possible 650-635. For almost a year, the Dow-Jones Industrial Average has held in a 100/0 trading ran between 741. 30 and 673.49. In terms of an individual stock, this is comparable to a trad n area between 74 1/-8 and 67 3/8. On -the-face of it, this is hardly an exciting performance but the nar-row trading range is actually the result of averaging out some very wide price swings, both up and down, in individual issues. We could fill several pages with lists of stocks that, since April, have either (1) declined 250/0 to 500/0, (2) advanced 250/0 to 500/0 or (3) have done nothing. For the past year, this has been a market in which it would have been possible to have been long of some stocks and, at the same time, short of others and to have made sizeable profits in both positions. Our technical work tells us that this selective type action will continue. We en- vision neither a roaring bull market nor a catastrophic decline. For a long time, our up- side potential for the Industrial Average has been 725-775. The lower part of this area was reached at the November high of 741. 30. \Ve would continue to lighten commitments in this area. On the downside, the most pessimistic projection at the moment is 650-635. We would be a buyer on balance if this area is approached. In the meantime, we would co – centrate our attention on individual issues rather than on the swings of the general marke Our recommended list consists of 70 issues. Individual each situation warrants regardless of the action of the a e a be added or dropped a 0 A bit of historical background might be Dow-Jones Industrial Average was selling at 8 tim h's in. e 1949 low, the rnings leld 6.70/0. At that leve the market was ridiculously undervalued. trial -i The bulk of the rise occurred in th e' b we 9 0 the 1961 high, the Indusulib-';oroken ao'Wrdiitedwopha e 949 and 1956-1957. During this firs phase, the average e to a high of 525. Earnings advanced from a 1946-1949 low chip investment i s 8 1957. The leaders of the rise were the blue rv ion of 1949 was corrected during this first phase. The second 0e nce has had a different background. The 1957-1962 market has had nei r th sistance of a drastic undervaluation nor a rising earnings trend. Earnings on th w-Jones Industrials have so far failed to better the 1957 peak 0 36.08, although th probably will do so in 1962. Despite the lack of earnings increase, the Industrial Average has advanced 410/0 from the 1956-1957 high of 525 to the 1961 high 741. In a sense, the advance has been an escape from reality. With earnings of many of the largest cyclical-type companies showing no increase, the purchase of other issues wa justified on the basis of projections of long-term growth in earning power rather than on immediate earnings. Most of this buying was concentrated on consume r goods issues. Some of the buying was in better quality investment issues which advanced to newall-tim highs in i E ratios and lows in yields. Also, unfortunately, a great deal of irrational bu ing came into a rather motley group of marginal stocks and industries, particularly in the new issues field. Some of these stocks have already had drastic price declines, but the correction of the excesses probably has osomewhat further to go. On the favorable side of the picture, there are many issues that are showing excel- lent technical action. In the main, they consist of groups that appear relatively under- valued. Many of them are in the blue chip investment group that led the 1949-1957 advance and have done little marketwise for the past 5 years. Others will be found in groups like coal, meat packing and textiles that have been in investment disfavor for a long period of time. The cross currents of adjustment necessary to build up a more normal market structure probably will result in a wide trading area for a considerable period of time. This consolidation period should be used to upgrade the quality of holdings both from a viewpoint of safety and ultimate price appreciation. Dow-Jones Ind. 709.54 EDMUND W. TABELL 18 un er no Clfe mstnnces IS to be construed as, an offer to 'ell or a solicitatIOn to buy any Bccur;tJes refered to herein The Jnformnhon contamed herem is not guuranteed (1'1 to nccurncy or completeness and the furmshIng thereof IS not, and under no Circumstances IS to be construed ns, a representn. 110n by Walston & Co, Inc. All expreS'llOns of opmion are subJect to change Without notice Walston & Co, Inc, find Officers, Directors, Stockholders and Employees thereof, purchase, sell and may hQ.ve an mterest III the secUrities mentioned herem This market letter IS mtended and presented merely as a genernl. mformal commentary on day to day market news and not as a complete anllbBI!!. Addlbonnl mformatlOn With respect to any securities referred to herem wdl bt . . .. . .. .-. . .. . WX 3Dl