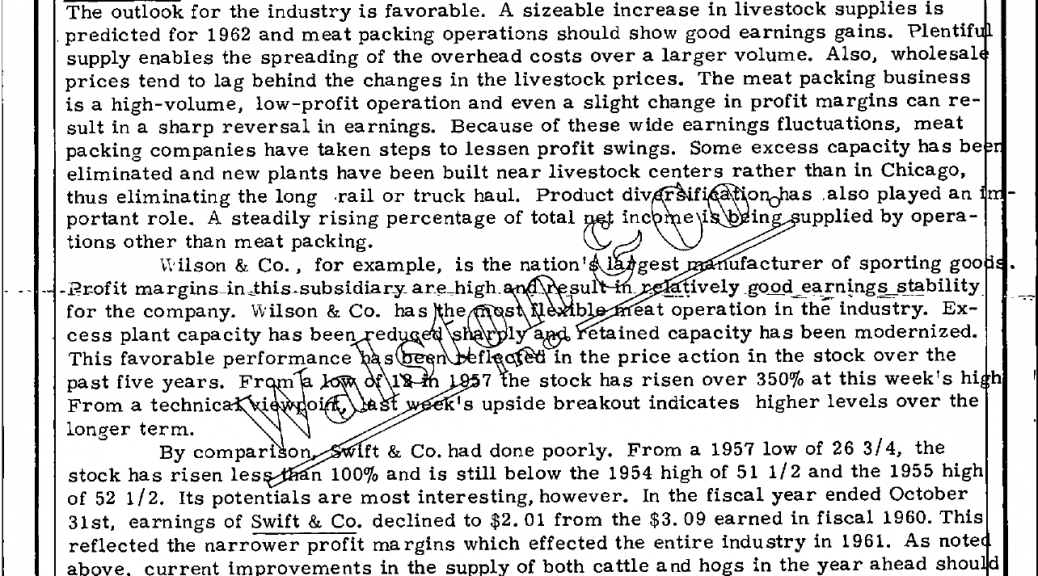 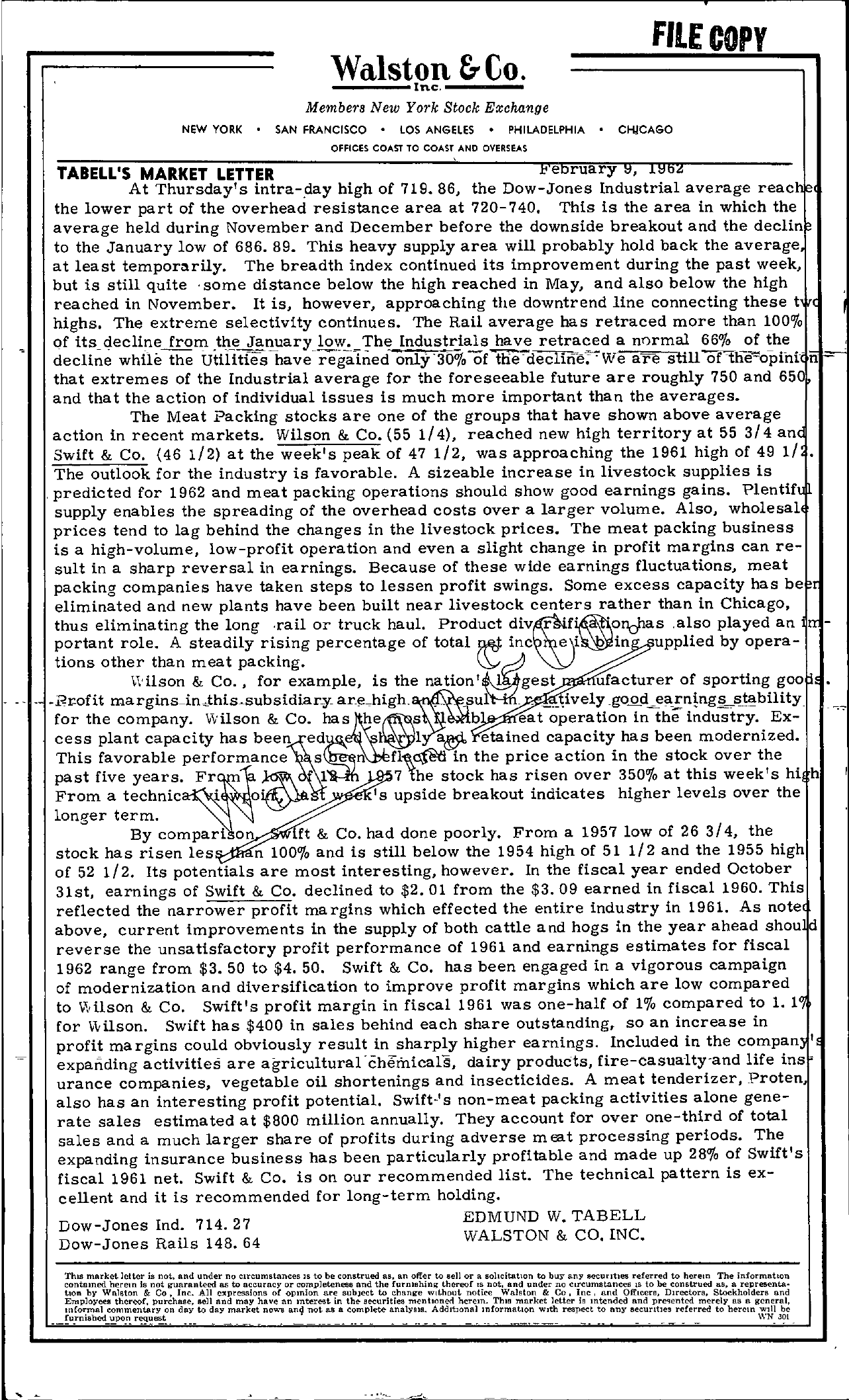 Walston &CO. Inc. FilE COpy Members New York Stock Exclw,nge NEW YORK SAN FRANCISCO LOS ANGELES PHILADELPHIA CHlCAGO OFFICES COAST TO COAST AND OVERSEAS TABEll'S MARKET lETTER F'ebruary 9, 1962 At Thursday's intra-day high of 719.86, the Dow-Jones Industrial average the lower part of the overhead resistance area at 720-740. This is the area in which the average held during November and December before the downside breakout and the declin to the January low of 686. 89. This heavy supply area will probably hold back the average at least temporllrily. The breadth index continued its improvement during the past week, but is still quite 'some distance below the high reached in May, and also below the high reached in November. It is, however, approaching the downtrend line connecting these t rc highs. The extreme selectivity continues. The Rail average has retraced more than 1000/0 of its decline from the January low. The Industrials have retraced a n1)rmal 660/0 of the decline while the utiiitfes only '300/0of the'declilfe';-We are still'ORhe'opihH n – ' that extremes of the Industrial average for the foreseeable future are roughly 750 and 650 and that the action of individual issues is much more important than the averages. The Meat Packing stocks are one of the groups that have shown above average action in recent markets. Wilson & Co. (55 1/4), reached new high territory at 55 3/4 anc Swift & Co. (46 1/2) at the week's peak of 47 1/2, was approaching the 1961 high of 49 1/ . The outlook for the industry is favorable. A sizeable increase in livestock supplies is ,predicted for 1962 and meat packing operations should show good earnings gains. tlentift supply enables the spreading of the overhead costs over a larger volume. Also, wholesal prices tend to lag behind the changes in the livestock prices. The meat packing business is a high-volume, low-profit operation and even a slight change in profit margins can re- sult in a sharp reversal in earnings. Because of these wide earnings fluctuations, meat packing companies have taken steps to lessen profit swings. Some excess capacity has be eliminated and new plants have been built near livestock centers rather than in Chicago, thus eliminating the long ,rail or truck haul. Product portant role. A steadily rising percentage of total inc e ,also played an 1lIupplied by opera- tions other than meat packing. i'dlson & Co., for example, is the ufacturer of sporting gooj! , .- -Rl'ofit ,.suiHti, . 5velygoodeac!n!ngs for the company. Wilson & Co. b eat operation in the industry. Ex- cess plant capacity has This favorable performance s n e'tained capacity has been modernized. in the price action in the stock over the past five From a technic i di 1 7 the stock has risen over 3500/0 at this week's hi h ,,,'s upside breakout indicates higher levels over the longer term. By compari on rwlft & Co. had done poorly. From a 1957 low of 26 3/4, the stock has risen les n 1000/0 and is still below the 1954 high of 51 1/2 and the 1955 high of 52 1/2. Its potentials are most interesting, however. In the fiscal year ended October 31st, earnings of Swift & Co. declined to 2.01 from the 3.09 earned in fiscal 1960. This reflected the narrower profit margins which effected the entire industry in 1961. As note above, current improvements in the supply of both cattle and hogs in the year ahead shou d reverse the unsatisfactory profit performance of 1961 and earnings estimates for fiscal 1962 range from 3.50 to 4. 50. Swift & Co. has been engaged in a vigorous campaign of modernization and diversification to improve profit margins which are low compared to V\,ilson & Co. Swift's profit margin in fiscal 1961 was one-half of 10/0 compared to 1. for Ihilson. Swift has 400 in sales behind each share outstanding, so an increase in profit margins could Obviously result in sharply higher earnings. Included in the compan, ' expanding activities are agricultural'chemicals, dairy products, fire-casualty-and life ins- urance companies, vegetable oil shortenings and insecticides. A meat tenderizer, Proten also has an interesting profit potential. Swift-'s non-meat packing activities alone gene- rate sales estimated at 800 million annually. They account for over one-third of total sales and a much larger share of profits during adverse m eat processing periods. The expanding insurance business has been particularly profitable and made up 280/0 of Swift's fiscal 1961 net. Swift & Co. is on our recommended list. The technical pattern is ex- cellent and it is recommended for long-term holding. Dow-Jones Ind. 714.27 Dow-Jones Rails 148. 64 EDMUND W. TABELL WALSTON & CO. INC. ThiS market letter is not. and under no Clrcumstnnces lS to be construed as, an offer to sell or a sohcitatlOn to buy any secuntles referred to herem The information contained herem is not guaranteed as to accuracy or completeness and the furnishing thereof IS not, and under no circumstances IS to be construed as a representa tlOn by Wnlston & Co, Inc. All expressions of opmion are subJect to change WIthout notice Walston & Co Inc and Officers Directors SU;ckholders and Employees thereof, purchase, Bell and may have an mterest in the seeurities mentioned herem. ThlB market is nnd p'relentcd m'erelY as a gC!lleral, mfOImal commentary on day to day market news nn4 not as a complete analYSIS. Addlbonal mformatlOn WIth respect to any SeCUrltIes referred to herem WIll be upo.n. . . \\'N Jl