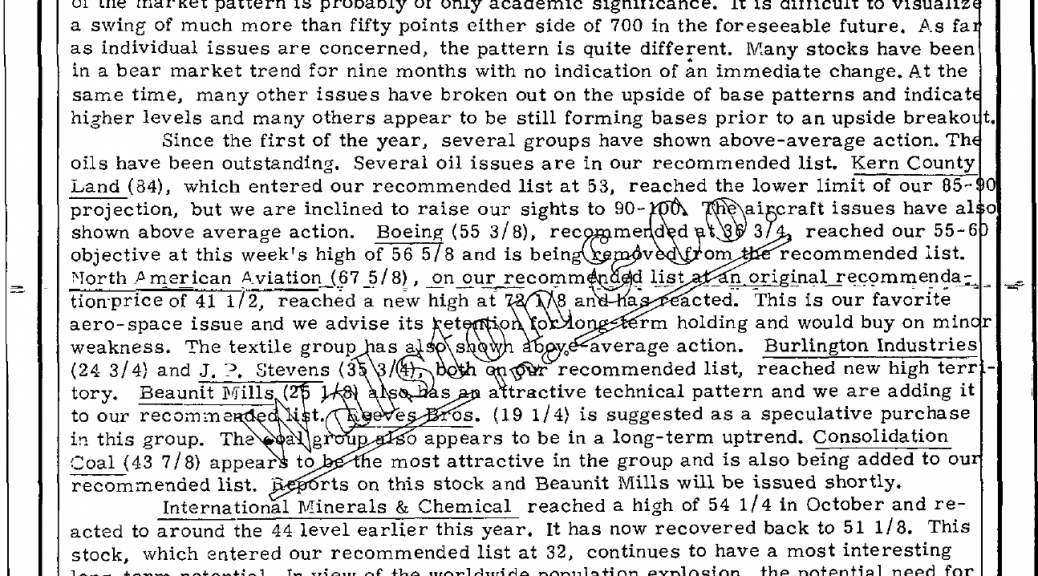 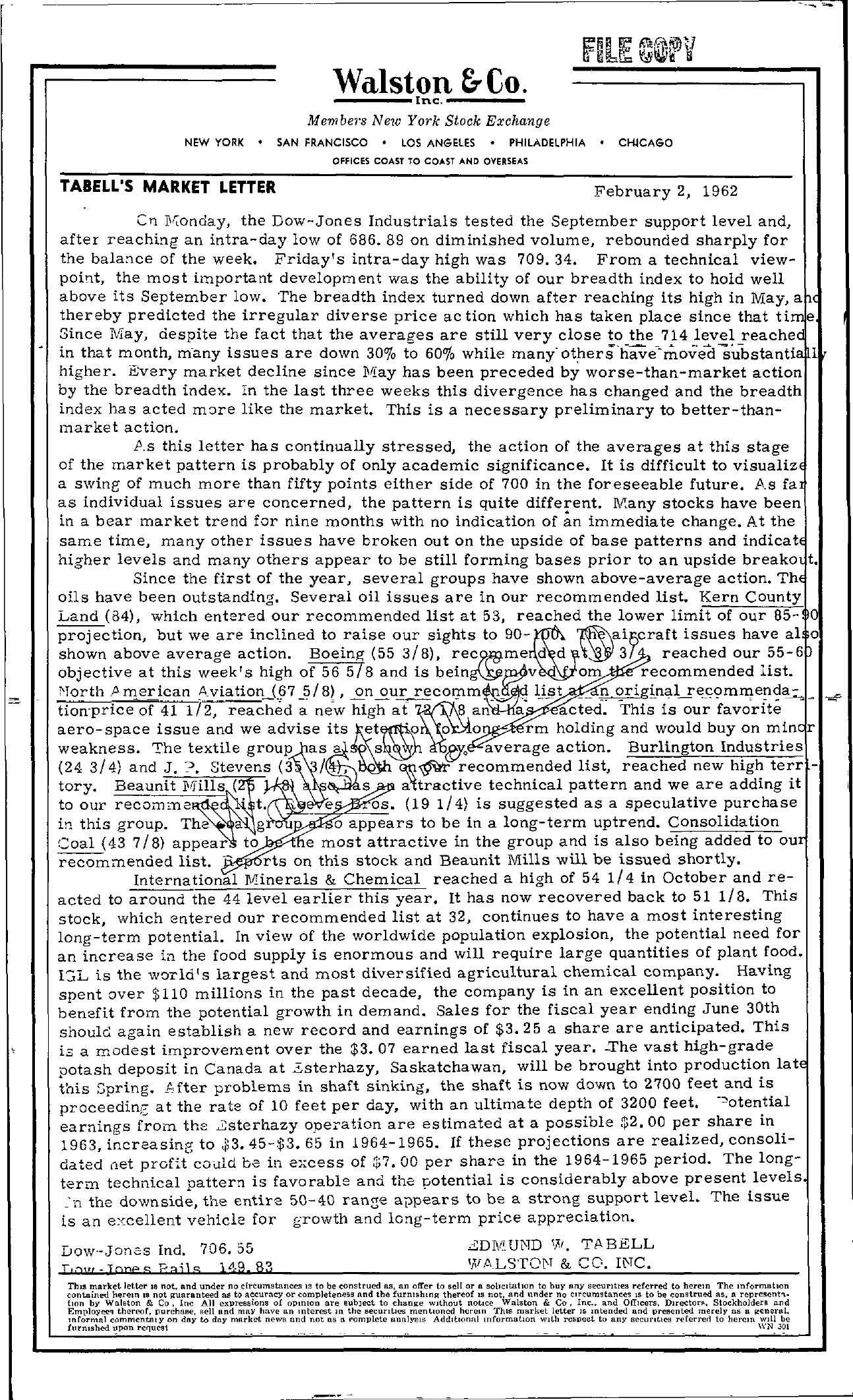 Walston &reo. Inc, – – – – – NEW YORK Mernbel'S New Y01'k Stock Exchange SAN FRANCISCO LOS ANGELES PHILADELPHIA OFFICES COAST TO COAST AND OVERSEAS TABELL'S MARKET LETTER February 2, 1962 Cn DlZonday, the Dow-Jones Industrials tested the September support level and, after reaching an intra-day low of 686. 89 on diminished volume, rebounded sharply for the of the week. Friday's intra-day high was 709.34. From a technical view- point, the most important development was the ability of our breadth index to hold well above its September low. The breadth index turned down after reaching its high in May, a thereby predicted the irregular diverse price ac tion which has taken place since that ti Since May, despite the fact that the averages are still very close to the 714 level reache in tha t month, many issues are down 300/0 to 600/0 while many' othershave–moved substanti higher. Every market decline since May has been preceded by worse-than-market action by the breadth index. In the last three weeks this divergence has changed and the breadth index has acted mlre like the market. This is a necessary preliminary to better-than- market action. P,s this letter has continually stressed, the action of the averages at this stage of the market pattern is probably of only academic significance. It is difficult to visualiz a swine of much more than fifty points either side of 700 in the foreseeable future. As fa as individual issues are concerned, the pattern is quite different. Many stocks have been in a bear market trend for nine months with no indication of an immediate change. At the same time, many other issues have broken out on the upside of base patterns and indicat higher levels and many others appear to be still forming bases prior to an upside breako t. Since the first of the year, several groups have shown above-average action. Th oils have been outstanding. Several oil issues are in our recommended list. Kern County Land (84), which entered our recommended list at 53, reached the lower limit of our 85- 0 projection, but we are inclined to raise our sights to issues have al 0 shown above average action. Boeing (55 3/8), recWl'l-me d d Lty 3f reached our 55-6 objective at this week's high of 565/8 and is om recommended list. North I merican A,viation C!,,7 5/ 81, ..Qn..Qur list tion'price of 41 172, reached a new high at 8 anWa acted. This is our favorite aero-space issue and we advise its et '0 0 0 rm holding and would buy on min r (24 3/4) and J. J. Stevens (3 / , recommended list, reached new high terr tory. Beaunit Do'ills ( s a'hractive technical pattern and we are adding it to our recomme . t. . e os. (191/4) is suggested as a speculative purchase in this group. The a g o appears to be in a long-term uptrend. Consolidation Coal ( 43 7/8) appear to e most attractive in the group and is also being added to ou recommended list. rts on this stock and Beaunit Mills will be issued shortly. International Minerals & Chemical reached a high of 54 1/4 in October and re- acted to around the 44 level earlier this year. It has now recovered back to 51 1/8. This stock, which entered our recommended list at 32, continues to have a most interesting long-term potential. In view of the worldwide population explosion, the potential need for an increase in the food supply is enormous and will require large quantities of plant food. I'3L is the world's largest and most diversified agricultural chemical company. Having spent lver 110 millions in the past decade, the company is in an excellent position to from the potential growth in demand. Sales for the fiscal year ending June 30th should again establish a new record and earnings of 3.25 a share are anticipated. This i;; a modest improvement over the 13.07 earned last fiscal year. -The vast high-grade Dotash deposit in Canada at .2;sterhazy, Saskatchawan, will be brought into production lat this Spring. ,P,fter problems in shaft sinking, the shaft is now down to 2700 feet and is proceedin,; at the rate of 10 feet per day, with an ultima te depth of 3200 feet. -otential earnings from the .2sterhazy operation are estimated at a possible 2.00 per share in 1963, increasing to J;3. 45-3.65 in 1964-1965. If these projections are realized, consoli- dated (let profit could be in e,;cess of );7. 00 per share in the 1964-1965 period. The long- term technical oattern is favorable and the Dotential is considerably above present levels 'n the the entire 50-40 to be a strong support level. The issue is an excellent vehicle for growth and long-term price appreciation. Dow'-Jones Ind. 706. 55 r'QUTJOpeS Pails il,e. B, .dDI\(fUND W. TA BELL & CO. INC. ThIS market letter 18 not, and under no circumstances IS to be construed as, an offer to sell or a sohcltatlOn to buy tmy securities referred to herem The information contained herem IS not guaranteed a to accurncy or completeness and the furmshmg thereof IS not, and under no Circumstances IS to he construed as, n represent,,- tlOn by Walston & Co, Inc All expressions of opmlOn are subJect to change WIthout notice Walston & Co, Inc., and Officers, Director!', Stockholders Ilod thereof, purchase, sell nnd may have an mterest In the securitIes mentIOned herem ThiS market letter IS mtended nnd presented merely as II. Il'cnerul, mformal commcntm yon dny to day mnrket news and not as (I romplete analySIS AddltlOnnl mformatlon WIth rcsileet to any seClIrltl(!S rcferrerl to herein will be furnished rC'lucst WN J01