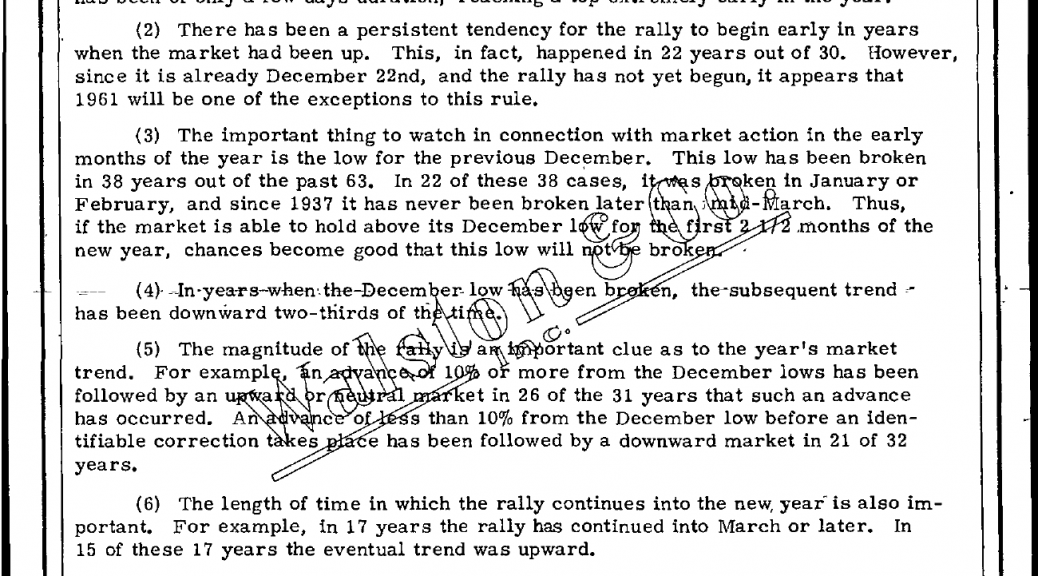 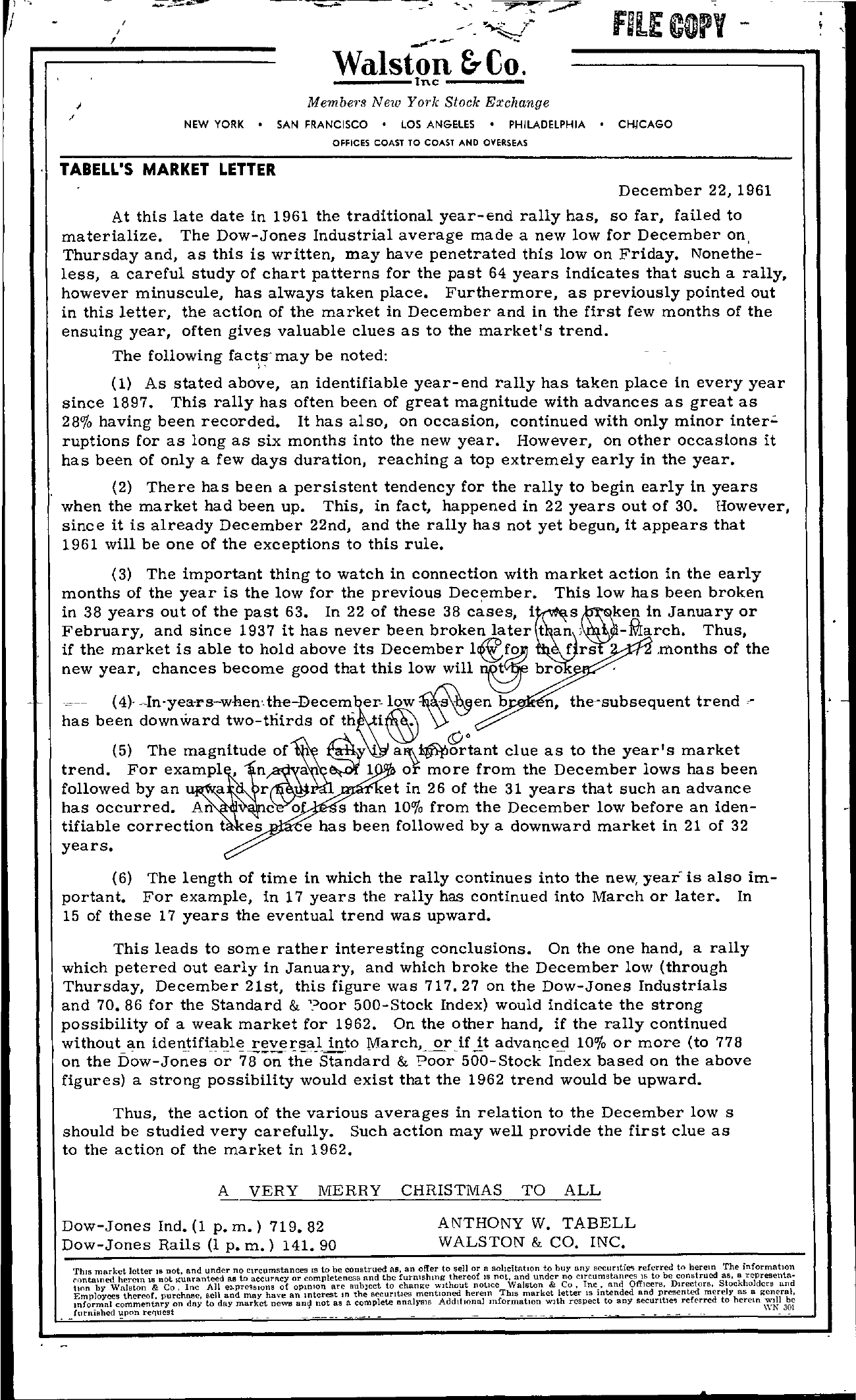 ,) –.- – I – – ——-c'-t… , f –, –'– —- … – .. …… Walston &- Co. Inc Membe8 New York Stock Exchange FilE COpy NEW YORK SAN FRANCISCO LOS ANGELES PHILADELPHIA CHICAGO OFFICES COAST TO COAST AND OVERSEAS TABEll'S MARKET lETTER December 22, 1961 At this late date in 1961 the traditional year-end rally has, so far, failed to materialize. The Dow-Jones Industrial average made a new low for December on, Thursday and, as this is written, may have penetrated this low on Friday. Nonetheless, a careful study of chart patterns for the past 64 years indicates that such a rally, however minuscule, has always taken place. Furthermore, as previously pointed out in this letter, the action of the market in December and in the first few months of the ensuing year, often gives valuable clues as to the market's trend. The following facts' may be noted I, (1) As stated above, an identifiable year-end rally has taken place in every year since 1897. This rally has often been of great magnitude with advances as great as 28 having been recorded. It has also, on occasion, continued with only minor inter'' ruptions for as long as six months into the new year. However, on other occasions it has been of only a few days duration, reaching a top extremely early in the year. (2) There has been a persistent tendency for the rally to begin early in years when the market had been up. This, in fact, happened in 22 years out of 30. However, since it is already December 22nd, and the rally has not yet begun, it appears that 1961 will be one of the exceptions to this rule. (3) The important thing to watch in connection with market action in the early months of the year is the low for the previous This low has been broken in 38 years out of the past 63. In 22 of these 38 cases, February, and since 1937 it has never been broken later t an' in January or -filrarch. Thus, if the market is able to hold above its December ' 9new year, chances become good that this low will f rs bro . .months of the has been downward two-ttiirds of th -\S. b C;l n, the-subsequent trend (5) The magnitude clue as to the year's market trend. For followed by an a r or more from the December lows has been . in 26 of the 31 years that such an advance has occurred. An c o s than 10 from the December low before an iden- tifiable correction t es e has been followed by a downward market in 21 of 32 years. (6) The length of time in which the rally continues into the new, year is also important. For example, in 17 years the rally has continued into lVIarch or later. In 15 of these 17 years the eventual trend was upward. This leads to some rather interesting conclusions. On the one hand, a rally which petered out early in January, and which broke the December low (through Thursday, December 21st, this figure was 717.27 on the Dow-Jones Industrials and 70.86 for the Standard & ',oor 500-Stock Index) would indicate the strong possibility of a weak market for 1962. On the other hand, if the rally continued without an identifiable reversal into March, or if it advanced 10 or more (to 778 on the Dow-Jonesor & oor- 5aO-Stock Index based on the above figures) a strong possibility would exist that the 1962 trend would be upward. Thus, the action of the various averages in relation to the December low s should be studied very carefully. Such action may well provide the first clue as to the action of the market in 1962. A VERY IVIERRY CHRISTIVIAS TO ALL Dow-Jones Ind. (1 p. m.) 719.82 Dow-Jones Rails (1 p. m.) 141. 90 ANTHONY W. TABELL WALSTON & CO. INC. ThiS mnrket letter IS not, nnd under no ClrCUmStl'lnces IS to be construed ltS, an offer to sell or a sohciwtLOn to buy any sC'Cunti(!'l refcrred til herem The informahon ('ontalned herem IS not Itunranteed as to accurRcy or completeness and the furnishing thereof IS not, and under no Clrcumstanl'es IS to be construed as, a representa- hon by Walston & Co Inc All e-preqSlons of opillion arc subJect to wIthout notice Walston & Co, Inc, and Officers, Directors, Stockholders and Employees thereof. purchase, sell and may have an Interest In the securities mentIOned herem ThiS market letter IS intended and presented merely as a general, mformal commentAry on day to day market news not as II. complete anah'13ls Addlbonal mformatlOn with respect to any SecUritlecJ referred to hcreln .