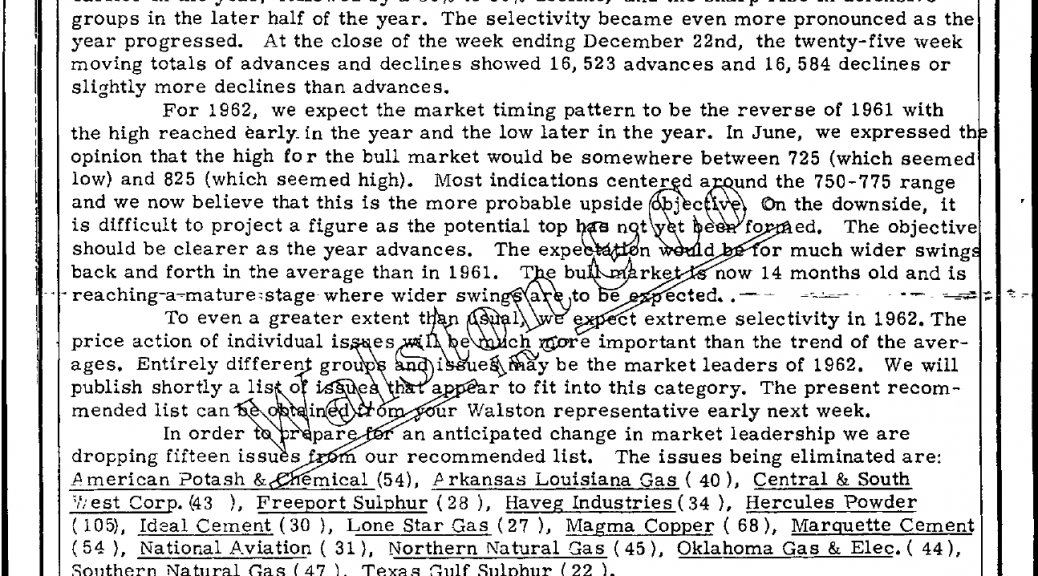 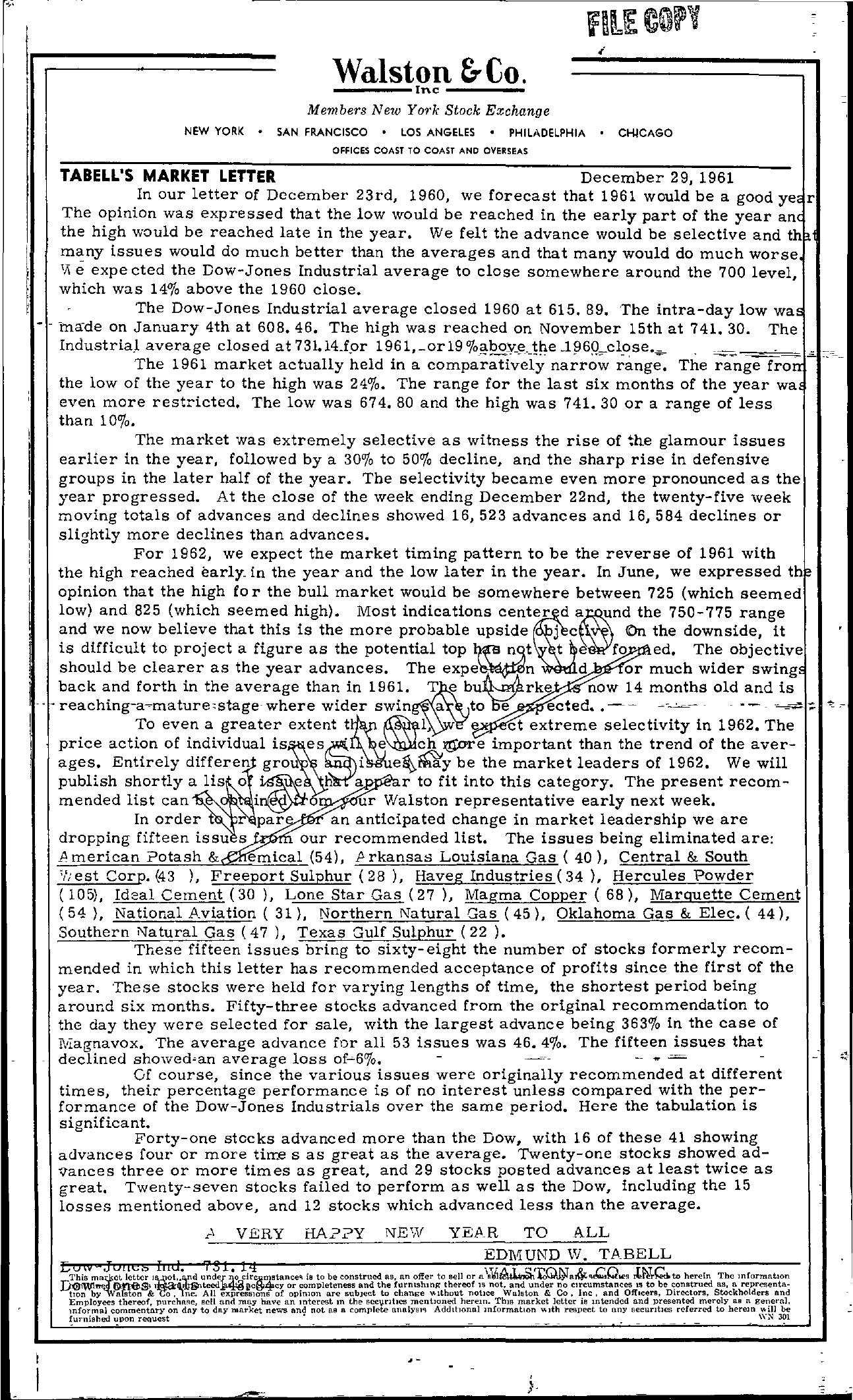 NEW YORK Walston &Co. —–Inc —– Members New Y01'k Stock Exchange SAN FRANCISCO LOS ANGELES PHILADELPHIA CHlCAGO OFFICES COAST TO COAST AND OVERSEAS TABELL'S MARKET LETTER December 29, 1961 In our letter of December 23rd, 1960, we forecast that 1961 would be a good ye r The opinion was expressed that the low would be reached in the early part of the year an the high would be reached late in the year. We felt the advance would be selective and th many issues would do much better than the averages and that many would do much worse Vi e expe cted the Dow-Jones Industrial average to close somewhere around the 700 level, which was 140/0 above the 1960 close. The Dow-Jones Industrial average closed 1960 at 615. 89. The intra-day low wa – – rna-de on January 4th at 608.46. The high was reached on November 15th at 741.30. The Industria.! average closed at 731.14for 1961,or19 aboye the 1960close. The 1961 market actually held in a The i;.-nge fro the low of the year to the high was 240/0. The range for the last six months of the year wa even more restricted. The low was 674.80 and the high was 741. 30 or a range of less than 100/0. The market was extremely selective as witness the rise of glamour issues earlier in the year, followed by a 300/0 to 500/0 decline, and the sharp rise in defensive groups in the later half of the year. The selectivity became even more pronounced as the year progressed. At the close of the week ending December 22nd, the twenty-five week moving totals of advances and declines showed 16,523 advances and 16,584 declines or slightly more declines than advances. For 1962, we expect the market timing pattern to be the reverse of 1961 with the high reached early in the year and the low later in the year. In June, we expressed th opinion that the high fo r the bull market would be somewhere between 725 (which seemed low) and 825 (which seemed high). Most indications amnd the 750-775 range and we now believe that this is the more probable upside j c On the downside, it is difficult to project a figure as the potential top t e fo ed. The objective should be clearer as the year advances. The d or much wider swing back and forth in the average than in -. reaching-a-mature'stage-where wider swin a now 14 months old and is ected – – – – — – – — To even a greater extent ct extreme selectivity in 1962. The price action of individual ages. Entirely differen gro i important than the trend of the averbe the market leaders of 1962. We will publish shortly a lis 0 H a r to fit into this category. The present recom- mended list can ur Walston representative early next week. In order r par an anticipated change in market leadership we are dropping fifteen issu s our recommended list. The issues being eliminated are American otash & emical (54), P rkansas Louisiana Gas ( 40), Central & South ','lest Corp. (43 ), Freeport Sulphur (28), Haveg Industries (34 ), Hercules Powder (105), Ideal Cement (30 ), Lone Star Gas (27), Magma Copper ( 68), Marquette Cement (54), National Aviation ( 31), Northern Natural Gas (45), Oklahoma Gas & Elec. ( 44), Southern Natural Gas (47 ), Texas Gulf Sulphur (22 ). These fifteen issues bring to sixty-eight the number of stocks formerly recom- mended in which this letter has recommended acceptance of profits since the first of the year. These stocks were held for varying lengths of time, the shortest period being around six months. Fifty-three stocks advanced from the original recommendation to the day they were selected for sale, with the largest advance being 3630/0 in the case of iViagnavox. The average advance for all 53 issues was 46.40/0. The fifteen issues that declined showedan average loss — Gf course, since the various issues were originally recommended at different times, their percentage performance is of no interest unless compared with the per- formance of the Dow-Jones Industrials over the same period. Here the tabulation is significant. Forty-one stecks advanced more than the Dow, with 16 of these 41 showing advances four or more tirr.e s as great as the average. Twenty-one stocks showed ad- vances three or more times as great, and 29 stocks posted advances at least twice as great. Twenty-seven stocks failed to perform as well as the Dow, including the 15 losses mentioned above, and 12 stocks which advanced less than the average. -'– VERY HAY NEW YEAR TO ALL EDMUND W. TABELL Eocv .folies flid. f.JT0htiWs letter & 'i'31. 14 mAT roO TMi' under qo…,circ,llmatance; is to be construed as, nn offer to sell or a JoeS herein Thc mformatlOn or completeness and the furnlshmg thereof IS not, and under no CIrcumstances IS to be construed as, a representa- hon by & 0 ,1ltnc, All expressIOns of opimon are subJect to change \\olthout notlcc Walston & Co, Inc, and Officers, Directors, Stockholders nnd Employees thereof sell nnd mny have an mterest 1ft the secv.ntles mentIOned herem. ThIS market letter is mtended and presented merely os a genernl. mformal on day to do)' morket news and not na a complete annlysl'l AdditIOnal mformatlon \\olth respect to any securitIes rderred to herem ,ill be furnished upon r e q u e s t WN 301 ,, )