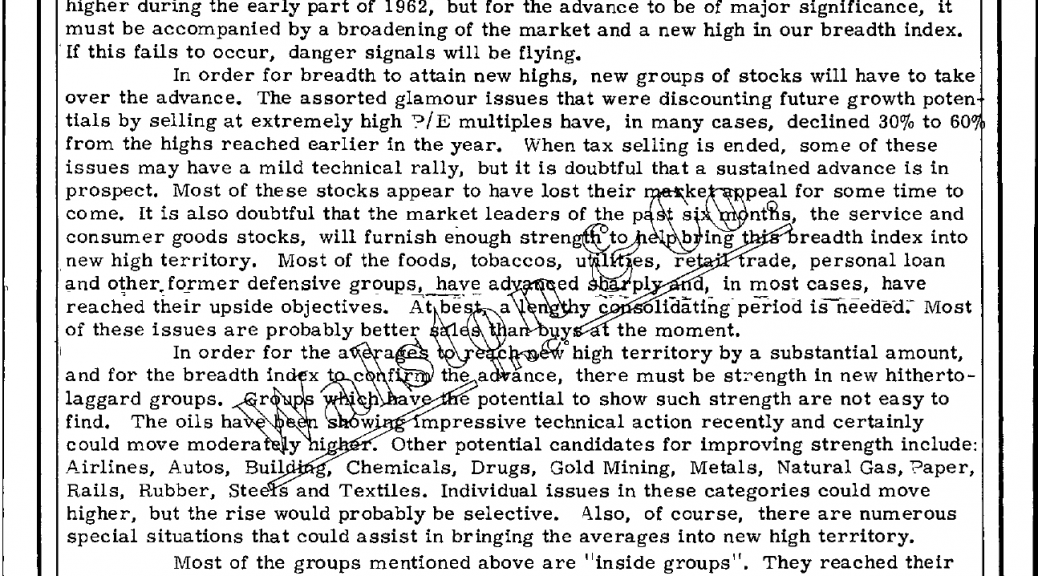 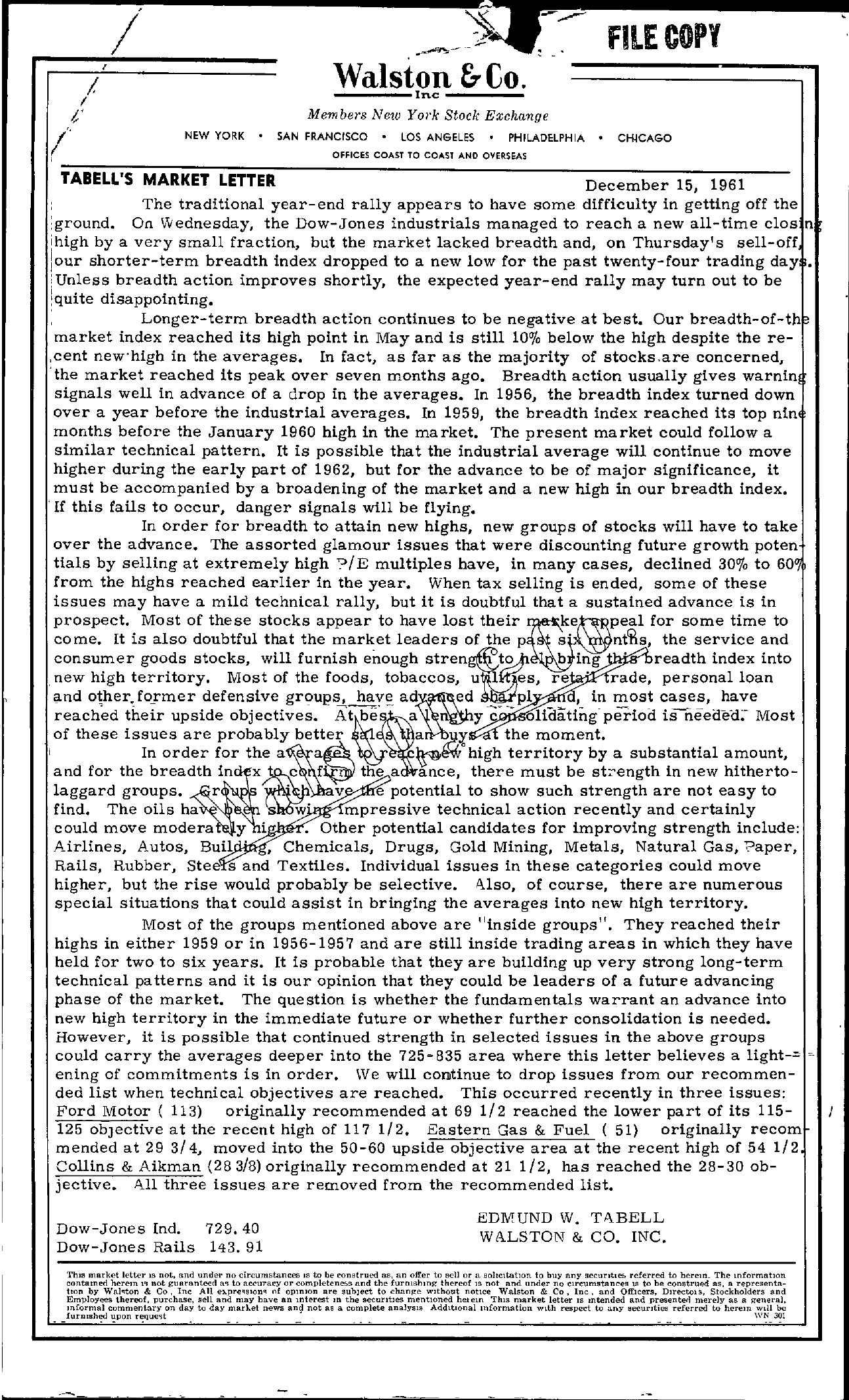 / ! I I ',/-' fiLE COpy Walston &- Co. – – – – – l n c – – Members New YOl'k Stock Exchange NEW YORK SAN FRANCISCO LOS ANGELES PHILADELPHIA CKiCAGO OFFICES COAST TO COAST AND OVERSEAS TABELl'S MARKET lETTER December 15, 1961 The traditional year-end rally appears to have some difficulty in getting off the ground. On Wednesday, the Dow-Jones industrials managed to reach a newall-time clos n ihigh by a very small fraction, but the market lacked breadth and, on Thursday's sell-off lour shorter-term breadth index dropped to a new low for the past twenty-four trading day. ;Unless breadth action improves shortly, the expected year-end rally may turn out to be !quite disappointing. , Longer-term breadth action continues to be negative at best. Our breadth-of-thr market index reached its high point in May and is still 10 below the high despite the re- ,cent new'high in the averages. In fact, as far as the majority of stocks,are concerned, 'the market reached its peak over seven months ago. Breadth action usually gives warnin signals well in advance of a drop in the averages. In 1956, the breadth index turned down over a year before the industrial averages. In 1959, the breadth index reached its top nin months before the January 1960 high in the market. The present market could follow a similar technical pattern. It is possible that the industrial average will continue to move higher during the early part of 1962, but for the advance to be of major significance, it must be accompanied by a broadening of the market and a new high in our breadth index. , If this fails to occur, danger signals will be flying. In order for breadth to attain new highs, new groups of stocks will have to take over the advance. The assorted glamour issues that were discounting future growth poten tials by selling at extremely high /E multiples have, in many cases, declined 30 to from the highs reached earlier in the year. When tax selling is ended, some of these issues may have a mild technical rally, but it is doubtful that a sustained advance is in prospect. Most of these stocks appear to have lost their come. It is also doubtful that the market leaders of the p for some time to the service and consumer goods stocks, will furnish enough b oreadth index into ,new high territory. Most of the foods, tobaccos, ,rade, personal loan and other.former defensive groups, have swpl , in most cases, have c'reached their upside – any olidating' pedoo isneedeo; Most of these issues are probably better a the moment. I In order for the and for the in laggard groups. r find. The oils ha . w' high territory by a substantial amount, the a ance, there must be st;oength in new hithertov e potential to show such strength are not easy to mpressive technical action recently and certainly could move modera y i . Other potential candidates for improving strength include Airlines, Autos, Buil ,Chemicals, Drugs, Gold Mining, Metals, Natural Gas, 'Paper, Rails, Rubber, Steeand Textiles. Individual issues in these categories could move higher, but the rise would probably be selective. Also, of course, there are numerous special situations that could assist in bringing the averages into new high territory. Most of the groups mentioned above are inside groups. They reached their highs in either 1959 or in 1956-1957 and are still inside trading areas in which they have held for two to six years. It is probable that they are building up very strong long-term technical patterns and it is our opinion that they could be leaders of a future advancing phase of the market. The question is whether the fundamentals warrant an advance into new high territory in the immediate future or whether further consolidation is needed. However, it is possible that continued strength in selected issues in the above groups could carry the averages deeper into the 725- 835 area where this letter believes a light-' ening of commitments is in order. We will continue to drop issues from our recommended list when technical objectives are reached. This occurred recently in three issues Ford Motor (113) originally recommended at 69 1/2 reached the lower part of its 115125 obJective at the recent high of 117 1/2. Eastern Gas & Fuel (51) originally recom mended at 293/4, moved into the 50-60 upside objective area at the recent high of 541/2 Collins & Aikman (283/8) originally recommended at 211/2, has reached the 28-30 objective. A.ll three issues are removed from the recommended list. Dow-Jones Ind. 729.40 Dow-Jones Rails 143.91 EDMUND W. TA.BELL WALSTON & CO. INC. ThiS market letter IS not. and under no circumstances IS to be construed as, an offer to Bell or a sohcltatlOn to buy any securltIe5 referred to herem. The mformatJon contained herem not guaranteed to aceuracy or completenel.s and the furmshmg- thereof IS not and under no Circumstances 18 to be construed as, a representa- hon by Wnllton & Co, Inc AU of mnmon are subject to ehange Without notice Walston & Co, Inc, and Officers, DlrectolS, Stockholders and Employees thereof, purchase, sell and may have an mterest m the secunties mentIOned helem ThiS market letter IS mtended and presenter! merely as a g-eneral, mformal commentary on day to day market news an;l not as a complete analYSIS Additional Information With respect to any securIties referred to herem wlll be fUfmsh,d reque.,t WN 301