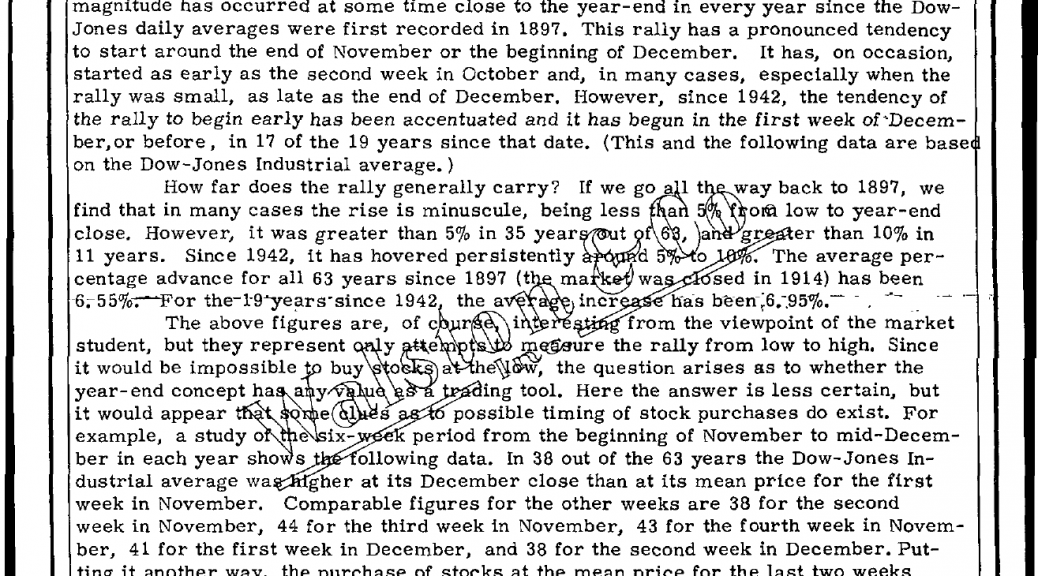 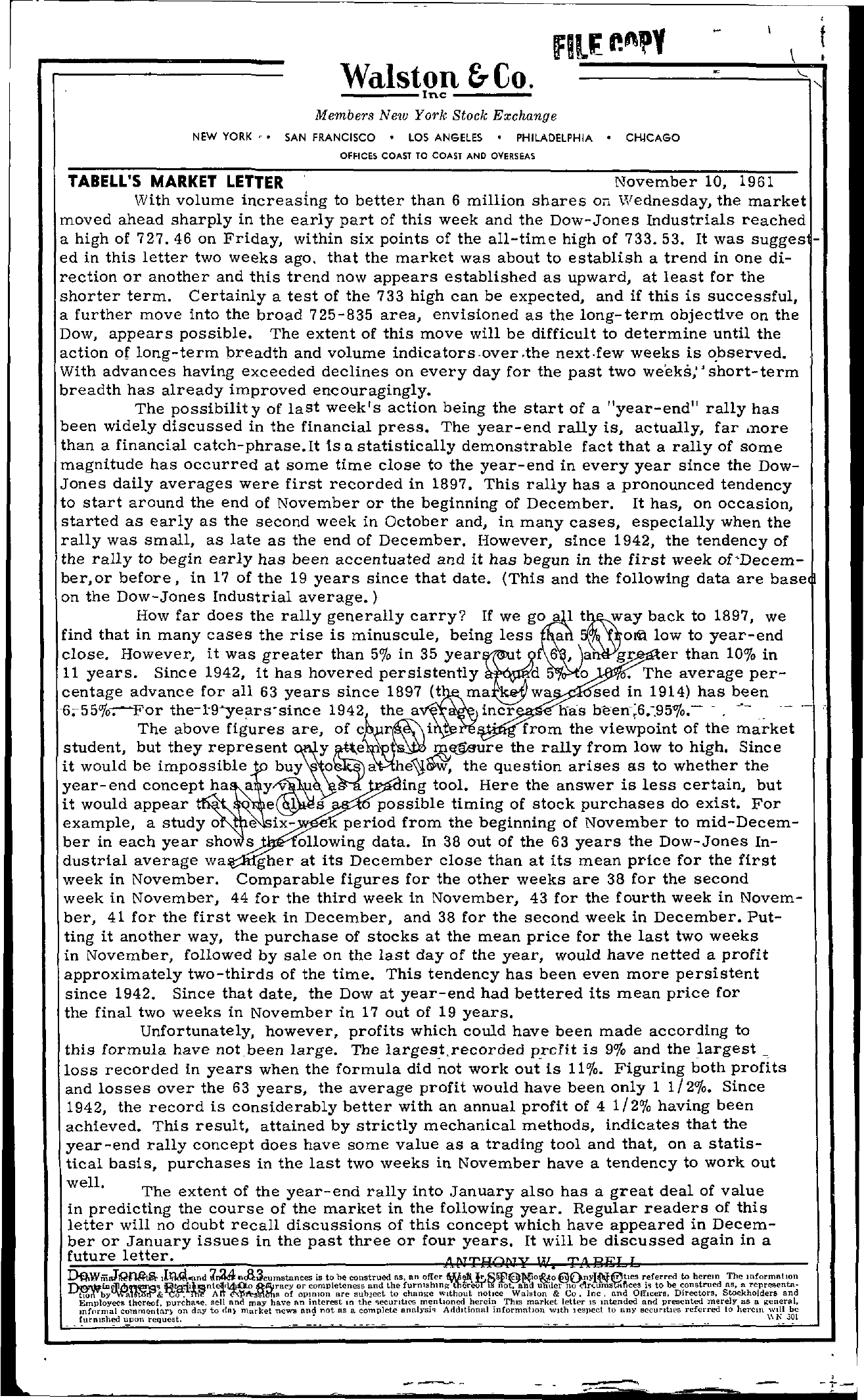 Walston &Co. Inc —– f \ Members New YOk Stock Exchange NEW YORK, SAN FRANCISCO LOS ANGELES PHILADELPHIA CHJCAGO OFFICES COAST TO COAST AND OVERSEAS TABELL'S MARKET LETTER November 10, 1961 With volume increasing to better than 6 million shares on Wednesday, the market moved ahead sharply in the early part of this week and the Dow-Jones Industrials reached a high of 727.46 on Friday, within six points of the all-time high of 733.53. It was sugges – ed in this letter two weeks ago. that the market was about to establish a trend in one di- rection or another and this trend now appears established as upward, at least for the shorter term. Certainly a test of the 733 high can be expected, and if this is successful, a further move into the broad 725-835 area, envisioned as the long-term objective on the Dow, appears possible. The extent of this move will be difficult to determine until the action of long-term breadth and volume indicators ,over ,the next,few weeks is o.bserved. With advances having exceeded declines on every day for the past two we'eks;' short-term breadth has already improved encouragingly. The possibility of last week's action being the start of a year-end rally has been widely discussed in the financial press. The year-end rally is, actually, far .nore than a financial catch-phrase.It Is a statistically demonstrable fact that a rally of some magnitude has occurred at some time close to the year-end in every year since the Dow- Jones daily averages were first recorded in 1897. This rally has a pronounced tendency to start around the end of November or the beginning of December. It has, on occasion, started as early as the second week in October and, in many cases, especially when the rally was small, as late as the end of December. However, since 1942, the tendency of the rally to begin early has been accentuated and it has begun in the first week of'Decem- ber,or before, in 17 of the 19 years since that date. (This and the following data are base on the Dow-Jones Industrial average. ) How far does the rally generally carry If we find that in many cases the rise is minuscule, being less a back to 1897, we low to year-end close. However, it was greater than 50/0 in 35 6 ,a gr er than 100/0 in 11 years. Since 1942, it has hovered persistently ii 0 o. The average per- centage advance for all 63 since 1897t wa., in -6;-550/0-;–For the-1-9'years'smce 1942 the a mcr !'ias been-,6. ,95. The above figures are, of . from the viewpoint of the market student, but they represent it would be impossible buy 0 a mE8uretherallyfromlowtohigh.Since the question arises as to whether the year-end concept ha a ing tool. Here the answer is less certain, but it would appear possible timing of stock purchases do exist. For example, a study 0 e ix- period from the beginning of November to mid-Decem- ber in each year sho s ollowing data. In 38 out of the 63 years the Dow-Jones In- dustrial average wa gher at its December close than at its mean price for the first week in November. Comparable figures for the other weeks are 38 for the second week in November, 44 for the third week in November, 43 for the fourth week in Novem- ber, 41 for the first week in December, and 38 for the second week in December. Put- ting it another way, the purchase of stocks at the mean price for the last two weeks in November, followed by sale on the last day of the year, would have netted a profit approximately two-thirds of the time. This tendency has been even more persistent since 1942. Since that date, the Dow at year-end had bettered its mean price for the final two weeks in November in 17 out of 19 years. Unfortunately, however, profits which could have been made according to this formula have not been large. The largest,recorded prcIit is 9 and the largest , loss recorded in years when the formula did not work out is 110/0. Figuring both profits and losses over the 63 years, the average profit would have been only 1 1/20/0. Since 1942, the record is considerably better with an annual profit of 4 1/2 having been achieved. This result, attained by strictly mechanical methods, indicates that the year-end rally concept does have some value as a trading tool and that, on a statis- tical basis, purchases in the last two weeks in November have a tendency to work out well. The extent of the year-end rally into January also has a great deal of value in predicting the course of the market in the following year. Regular readers of this letter will no doubt recall discussions of this concept which have appeared in Decem- ber or January issues in the past three or four years. It will be discussed again in a future letter. W. TAlil;lii;l,l, d'n2A1lc83eumstnnces is to construed as, an offer referred to herem The lllformnhon Ql'\1racy or completeness nnd t.he fUrOlshmg'thcretr'ts not, a'tilJ ul'hlcr no i' to be eonstr\led !lS, n rcpresentn- …..t'iOilbyUWal't.'lirt&.a.e,r,-lhl! Art of OP1Dlon arc suhJect to change without notice Walston & Co. Inc. and Officers, Direetors, Stockholders and Employees thereof purcha;(', sell and may have nn interest In the 'leeUrltlcs mentIOned herein ThiS market letter IS Intended and presented merely as a general, mformal on day to dill' market neWB and not. as a complete anaiysiq Addltionui iniormntlOn With ICSpcct to any securities rcferrld to herem will be \\1'.301 – ,-