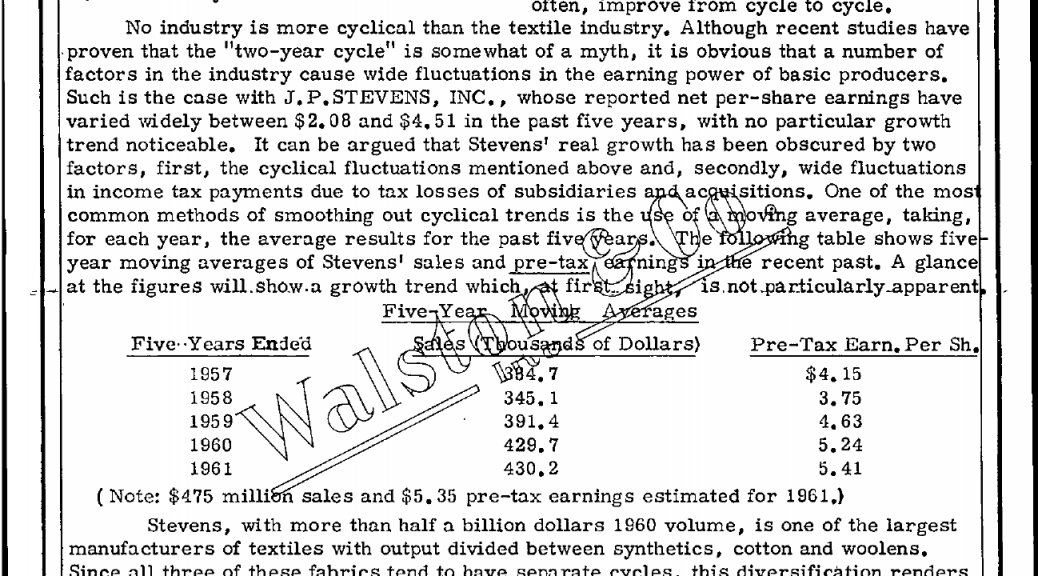 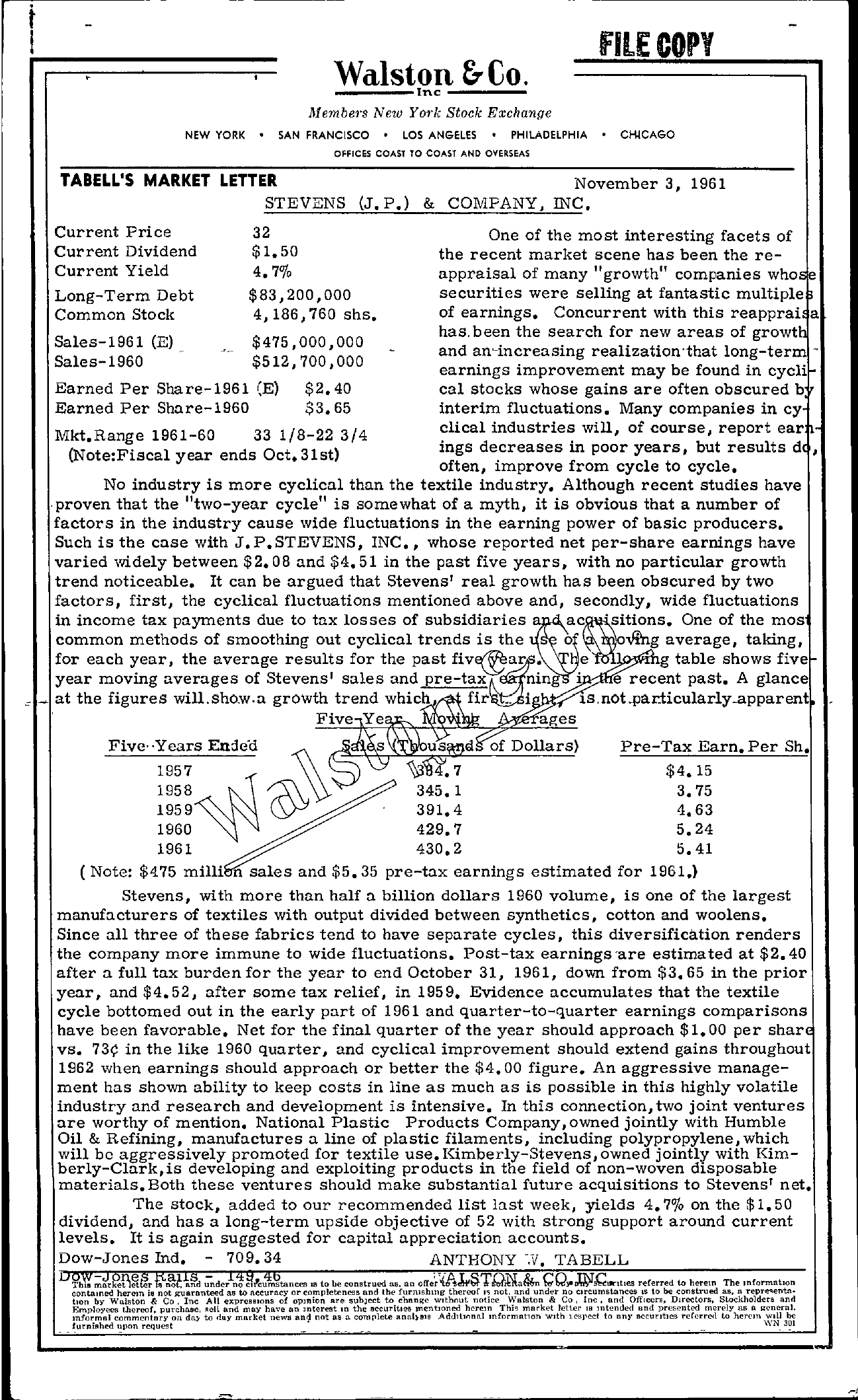 t FILE COpy Walston &- Co. Inc – – – – – !Ifembel'S New Y O1'k Stock Exchange NEW YORK SAN FRANCISCO LOS ANGELES PHILADELPHIA CHlCAGO OFFICES COAST TO COAST AND OVERSEAS TABELL'S MARKET LETTER November 3, 1961 STEVENS (J. P.) & COMPANY, INC, Current Price Current Dividend 32 1.50 One of the most interesting facets of the recent market scene has been the re- Current Yield 4.7 appraisal of many growth companies who Long-Term Debt 83,200,000 securities were selling at fantastic multiple Common Stock 4,186,760 shs. of earnings. Concurrent with this reapprai a Sales-1961 (E) Sales-1960 475,000,000 512,700,000 has, been the search for new areas of growt and an'-increasing realization'that long-term earnings improvement may be found in cycli Earned Per Share-1961 (E) 2.40 cal stocks whose gains are often obscured b Earned Per Share-1960 3.65 interim fluctuations. Many companies in cy Mkt.Range 1961-60 33 1/8-223/4 (NoteFiscal year ends Oct. 31st) cHcal industries will, of course, report ear ings decreases in poor years, but results d , often, improve from cycle to cycle. No industry is more cyclical than the textile industry. Although recent studies have ,proven that the two-year cycle is somewhat of a myth, it is obvious that a number of factors in the industry cause wide fluctuations in the earning power of basic producers. Such is the case with J.P.STEVENS, INC., whose reported net per-share earnings have varied widely between 2.08 and 4.51 in the past five years, with no particular growth trend noticeable. It can be argued that Stevens' real growth has been obscured by two factors, first, the cyclical fluctuations mentioned above and, secondly, wide fluctuations in income tax payments due to tax losses of subsidiaries sitions. One of the mos common methods of smoothing out cyclical trends is the 0 -.ffug average, taking, for each year, the average results for the past e g table shows five year moving averages of Stevens' sales and pre-tax nin i e recent past. A glance c at the figures will. show, a growth trend which Five Ye &Five..Years Endea fir., i ls,noLpadicularlyapparent Pre-Tax Earn. Per Sh. 1959 1960 1961 W 4.15 3.75 4.63 5.24 5.41 (Note 4.75 milli n sales and 5.35 pre-tax earnings estimated for 1961.) Stevens, with more than half a billion dollars 1960 volume, is one of the largest manufacturers of textiles with output divided between synthetics, cotton and woolens. Since all three of these fabrics tend to have separate cycles, this diversification renders the company more immune to wide fluctuations. Post-tax earnings'are estimated at 2.40 after a full tax burden for the year to end October 31, 1961, down from 3.65 in the prior year, and 4.52, after some tax relief, in 1959. Evidence accumulates that the textile cycle bottomed out in the early part of 1961 and quarter-to-quarter earnings comparisons have been favorable. Net for the final quarter of the year should approach 1.00 per shar vs. 73 in the like 1960 quarter, and cyclical improvement should extend gains throughout 1962 when earnings should approach or better the 4.00 figure. An aggressive management has shown ability to keep costs in line as much as is possible in this highly volatile industry and research and development is intensive. In this connection, two joint ventures are worthy of mention. National Plastic Products Company, owned jointly with Humble Oil & Refining, manufactures a line of plastic filaments, including polypropylene, which will bc aggreSSively promoted for textile use. Kimberly-Stevens, owned jointly with Kimber1y-Clark,is developing and exploiting products in the field of non-woven disposable materials. Both these ventures should make substantial future acquisitions to Stevens' net. The stOCk, added to our recommended list last week, yields 4.7 on the 1.50 dividend, and has a long-term upside objective of 52 with strong support around current levels. It is again suggested for capital appreciation accounts. Dow-Jones Ind. – 709.34 ANTHONY '.V. TABELL ThiS r IS nder no cl!cumstances 16 to be construed as, an referred to herem The informatIon eontalned herem is not guaranteed as to accuracy or completeness Dnd the furmshlllg thereof)'; not, llnd under no c;lrcumstances IS to be construed as, 11 bon by WoJaton & Co Inc AU ('xpreaBlOns of opmion are subJect to chnnR'e Without notice li\'nlston & Co, Inc, and Offlccrs. DIrectors, Stockholders and Employees thereof. and may have an mterest m the SCCUritles mentioned herem market Jetter lB mtended Ilnd presented merely us n gcneral. Informal commentary on dn to rlo.y market news and nnt as a com1lete anahslB Adur\.lnnnl mformatlOn WIth lCSl'ect to nn)' seC\lrJtJes referred to hercm wdl be furni9hed upon r e q u e s t \\TN 301