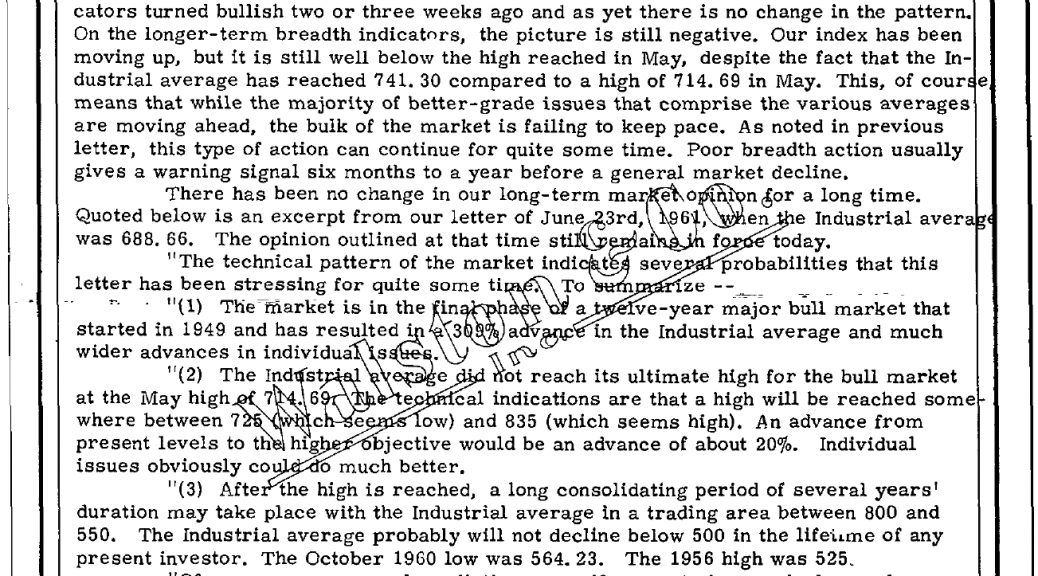 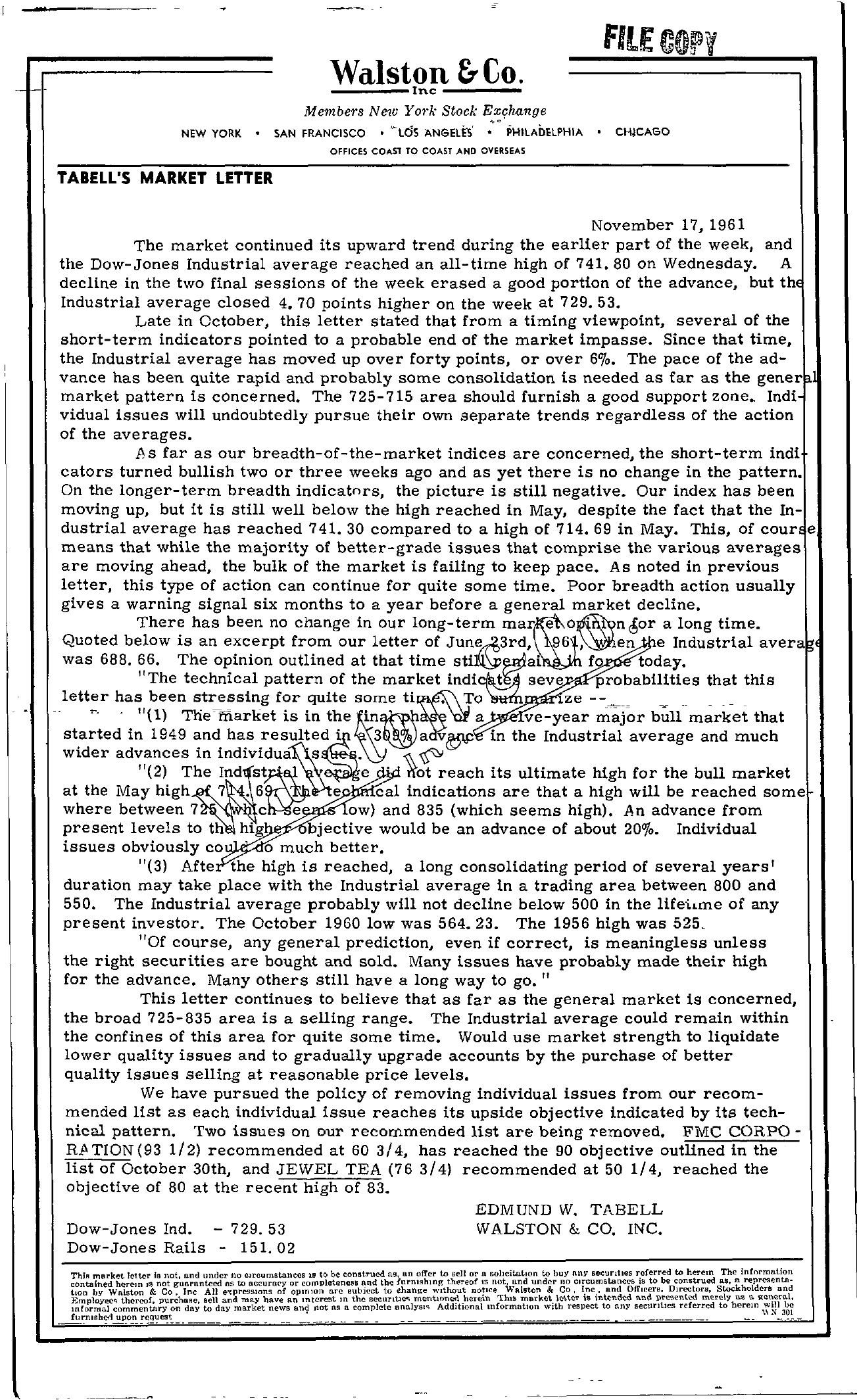 Walston &- Co. Inc – – – – – Member8 New Yo'k Stock Exqhange ,,- NEW YORK SAN FRANCISCO l6s !.NGEt!S' PHilADElPHIA CHlCAGO OFFICES COAST TO COAST AND OVERSEAS TABELL'S MARKET LETTER November 17,1961 The market continued its upward trend during the earlier part of the week, and the Dow-Jones Industrial average reached an all-time high of 741. 80 on Wednesday. A decline in the two final sessions of the week erased a good portion of the advance, but th Industrial average closed 4.70 points higher on the week at 729.53. Late in October, this letter stated that from a timing viewpoint, several of the short-term indicators pointed to a probable end of the market impasse. Since that time, the Industrial average has moved up over forty points, or over 6. The pace of the advance has been quite rapid and probably some consolidation is needed as far as the gener market pattern is concerned. The 725-715 area should furnish a good support zone., Indi vidual issues will undoubtedly pursue their own separate trends regardless of the action of the averages. As far as our breadth-of-the-market indices are concerned, the short-term indi cators turned bullish two or three weeks ago and as yet there is no change in the pattern. On the longer-term breadth indicators, the picture is still negative. Our index has been moving up, but it is still well below the high reached in May, despite the fact that the Industrial average has reached 741. 30 compared to a high of 714. 69 in May. This, of cour e means that while the majority of better-grade issues that comprise the various averages are moving ahead, the bulk of the market is failing to keep pace. As noted in previous letter, this type of action can continue for quite some time. Poor breadth action usually gives a warning signal six months to a year before a general market decline. There has been no change in our long-term a long time. Quoted below is an excerpt from our letter of 96 e Industrial avera was 688. 66. The opinion outlined at that time . f today. The technical pattern of the market seve probabilities that this letter has been stressing for quite some ze — – (1) The-market is in ave-year b;ll market that started in 1949 and has in the Industrial average and much wider advances in (2) The Ind e ' r'fot reach its ultimate high for the bull market at the May high 7 . 6 e cal indications are that a high will be reached some where between 7 ce ow) and 835 (which seems high). An advance from present levels to th hig bjective would be an advance of about 200/0. Individual issues obviously cou 0 much better. (3) Afte the high is reached, a long consolidating period of several years' duration may take place with the Industrial average in a trading area between 800 and 550. The Industrial average probably will not decline below 500 in the lifei.Lme of any present investor. The October 1960 low was 564.23. The 1956 high was 525, Of course, any general prediction, even if correct, is meaningless unless the right securities are bought and sold. Many issues have probably made their high for the advance. Many others still have a long way to go. This letter continues to believe that as far as the general market is concerned, the broad 725-835 area is a selling range. The Industrial average could remain within the confines of this area for quite some time. Would use market strength to liquidate lower quality issues and to gradually upgrade accounts by the purchase of better quality issues selling at reasonable price levels. We have pursued the policy of removing individual issues from our recommended list as each individual issue reaches its upside objective indicated by its technical pattern. Two issues on our recommended list are being removed. FMC OORPO RA TION (93 1/2) recommended at 60 3/4, has reached the 90 obj ective outlined in the list of October 30th, and JEWEL TEA (763/4) recommended at 50 1/4, reached the objective of 80 at the recent high of 83. Dow-Jones Ind. – 729.53 Dow-Jones Rails – 151. 02 EDMUND W. TABELL WALSTON & CO. INC. ThiR market letter is not. and under no Clrcumstnnces 19 to be construed us, un offer to sell or a sohcitatiOn to buy nny securities T.cferred to herem The information contnlned herCm IS not guaranteed as to accursey or completeness and the furmshlDg thereof IS not, and under no circumstances IS to be construed as, n representa- tion by Wnlston & Co, Inc All expressIOns of oPinIOn arc subjcct to change Without nO!lce ,,'alston & Co, I,ne,' and Directors, Stockholde-NI nnd mployC(''1 the-reof, .sell and may bave an mterest III the seeurltlel TIe a .herem ThIS mnrkct.lottor IS mt.enOed I\n(!, merely 1.'0 \l. to herem