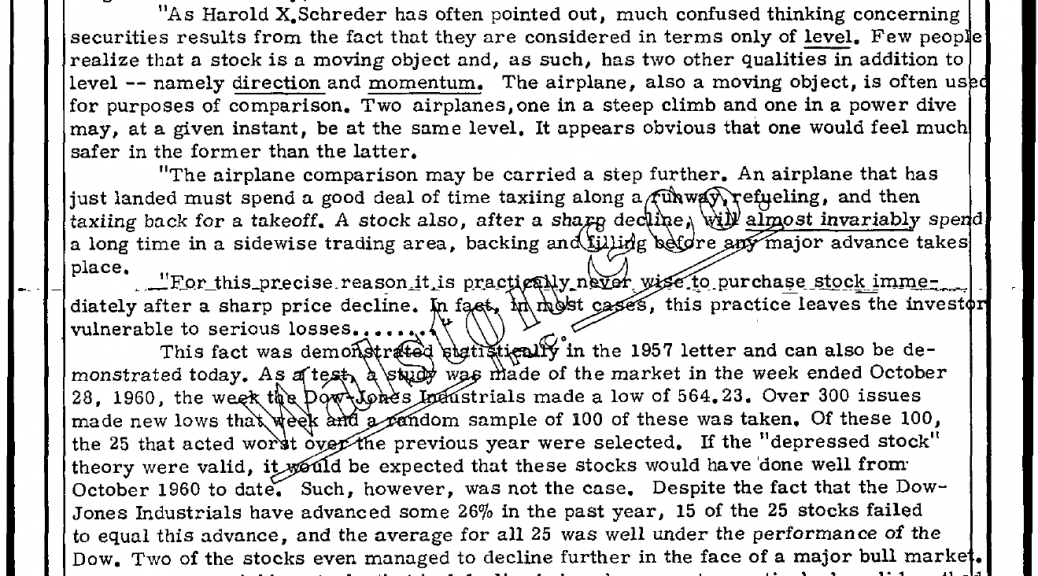 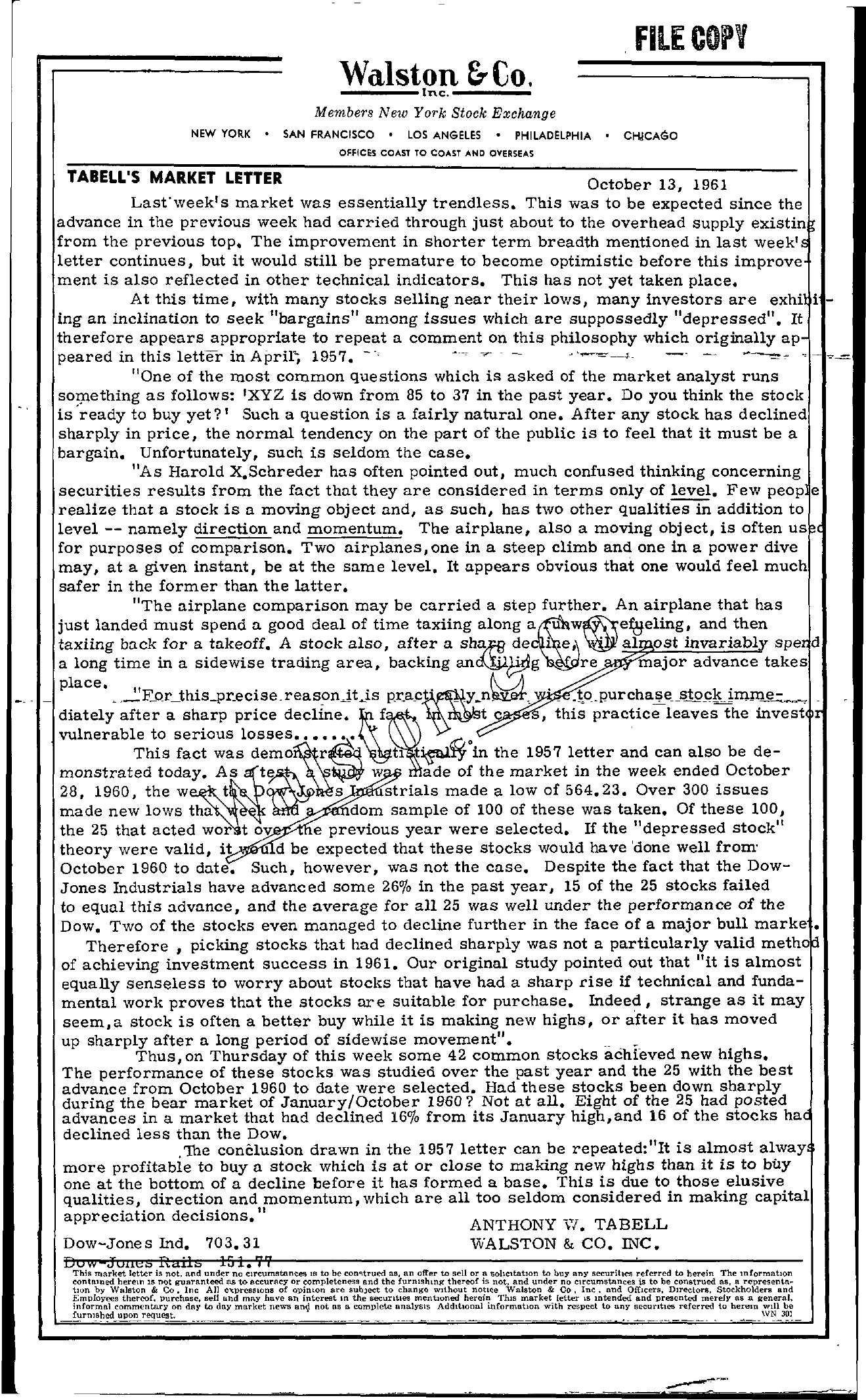 FILE COpy NEW YORK Walston &- Co. —–Inc. —….; Members N e10 York Stock Exchange SAN FRANC'SCO LOS ANGELES PHILADELPHIA CHICAGO OFFICES COAST TO COAST AND OVERSEAS TABEll'S MARKET lETTER October 13, 1961 Last'week's market was essentially trendless. This was to be expected since the advance in the previous week had carried through just about to the overhead supply existin from the previous top. The improvement in shorter term breadth mentioned in last week' letter continues, but it would still be premature to become optimistic before this improve ment is also reflected in other technical indicators. This has not yet taken place. At this time, with many stocks selling near their lows, many investors are exhi i – ing an inclination to seek bargains among issues which are suppossedly depressed. It therefore appears appropriate to repeat a comment on this philosophy which originally ap peared in this letter in April'; 1957. -', -'- –, -' -. —- , – One of the most common questions which iR asked of the market analyst runs as follows 'XYZ is down from 85 to 37 in the past year. Do you think the stock is 'ready to buy yet' Such a question is a fairly natural one. After any stock has declined sharply in price, the normal tendency on the part of the public is to feel that it must be a bargain. Unfortunately, such is seldom the case. As Harold X.Schreder has often pointed out, much confused thinking concerning securities results from the fact that they are considered in terms only of level. Few peop e realize that a stock is a moving object and, as such, has two other qualities in addition to level — namely direction and momentum. The airplane, also a mOving object, is often us for purposes of comparison. Two airplanes, one in a steep climb and one in a power dive may, at a given instant, be at the same level. It appears obvious that one would feel much safer in the former than the latter. The airplane comparison may be carried a step further. An airplane that has just landed must spend a good deal of time taxiing along and then taxiing back for a takeoff. A stock also, after a sha,fe de i e, 0.1 ost invariab1 spe d a long time in a sidewise trading area, backing – re .' major advance takes vulnerable to serious losses.. cO . This fact was h the 1957 letter and can also be de- monstrated today. As wade of the market in the week ended October 28, 1960, the w t s strials made a low of 564.23. Over 300 issues made new lows tha dom sample of 100 of these was taken. Of these 100, the 25 that acted wor t ov e previous year were selected. If the depressed stock theory were valid, it d be expected that these stocks would have 'done well from October 1960 to date. Such, however, was not the case. Despite the fact that the Dow- Jones Industrials have advanced some 260/0 in the past year, 15 of the 25 stocks failed to eqUal this advance, and the average for all 25 was well under the performance of the Dow. Two of the stocks even managed to decline further in the face of a major bull marke Therefore, picking stocks that had declined sharply was not a particularly valid meth of achieving investment success in 1961. Our original study pointed out that it is almost equally senseless to worry about stocks that have had a sharp rise if technical and funda- mental work proves that the stocks are suitable for purchase. Indeed, strange as it may seem,a stock is often a better buy while it is making new highs, or after it has moved up sharply after a long period of sidewise movement. Thus, on Thursday of this week some 42 common stocks achieved new highs. The performance of these stocks was studied over the past year and the 25 with the best advance from October 1960 to date were selected. Had these stockS been down sharply during the bear market of January/October 1960 Not at all. Eight of the 25 had posted advances in a market that had declined 160/0 from its January high, and 16 of the stocks ha declined less than the Dow .'!he conclusion drawn in the 1957 letter can be repeatedIt is almost alway more profitable to buy a stock which is at or close to making new highs than it is to buy one at the bottom of a decline before it has formed a base. This is due to those elusive qualities, direction and momentum, which are all too seldom considered in making capital appreciation decisions. ANTHONY VI. TABELL Dow-Jones Ind. 703.31 WALSTON & CO. INC. Dow-Jones Rails 151. 'itt This market letter is not, and under no Circumstances IS to be conltrued as, an offer to sell or a sohCltatlOn to buy any securities referred to herein The mformahon contluned herem 15 not 1fU8ranteed as to accuracy or completeness Bnd the furnlshmg thereof is not, and under no Clrcumstunces is to be construed as, a bon by \Vnlston & Co. Inc All ClprCSSlOns of opinLOn arc subJect to change WIthout notu!e Walston & Co. Inc. and OffIcers, DlTectors, Stockholders and Employees therrof. purchase, Bell and may have an interest m the seeurltles mentIOned herein ThIS market letter IS mtended and presented merely as n general. informal commentary on da)' to day market news am not as a complete analYSIS AddItional information with respect to uny seculIties referred to hereIn Will be . . . ,