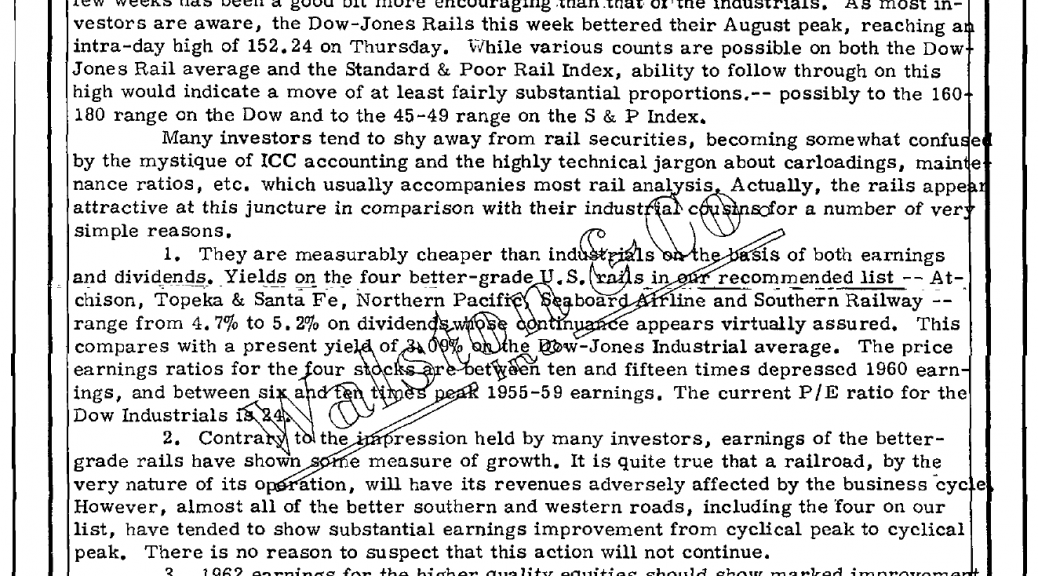 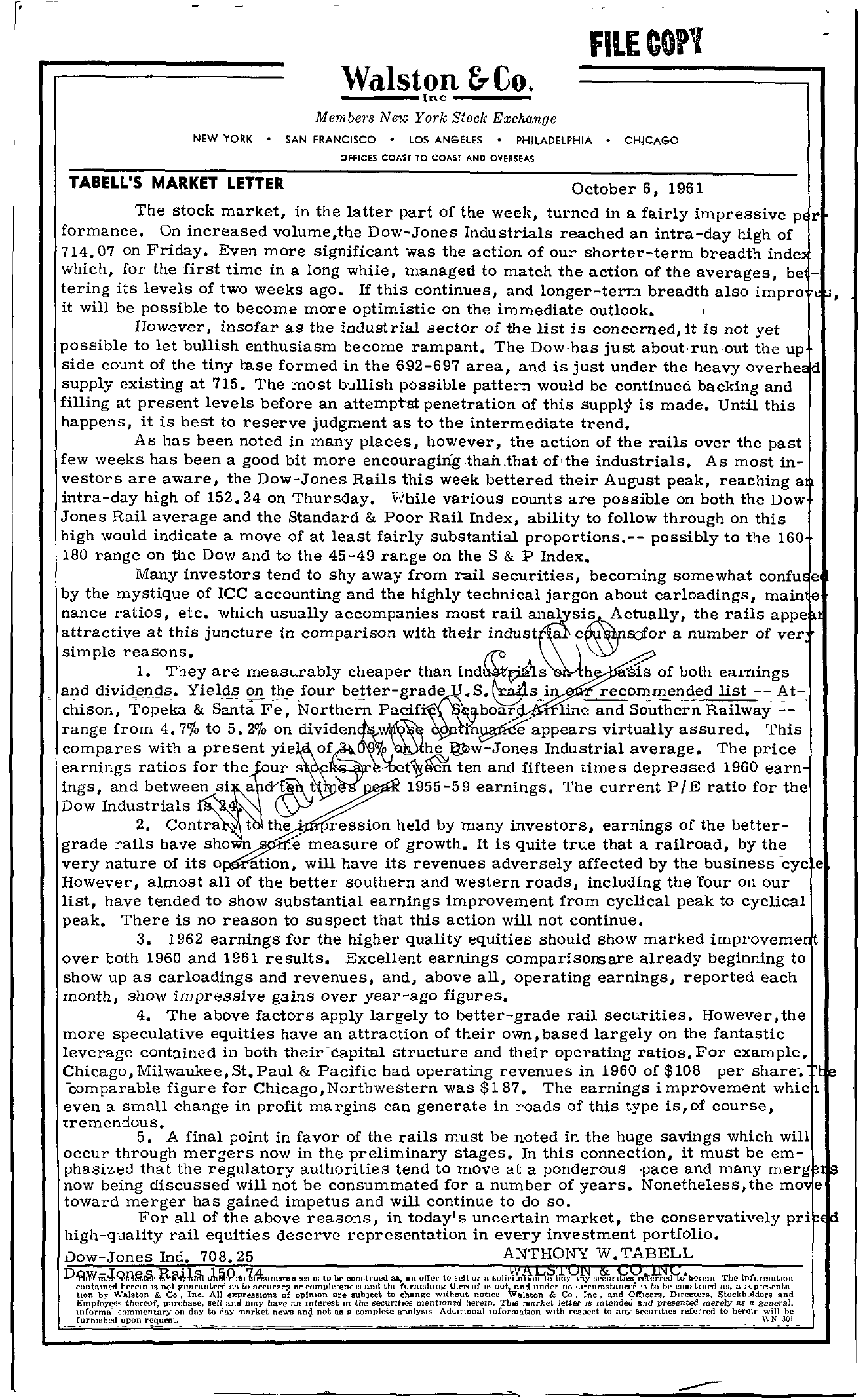 FILE COpy NEW YORK Walston &- Co. Inc. Members New York Stock Exchange SAN FRANCISCO LOS ANGELES PHILADELPHIA CHJCAGO OFFICES COAST TO COAST AND OVERSEAS TABEll'S MARKET lETTER October 6, 1961 The stock market, in the latter part of the week, turned in a fairly impressive p r formance. On increased volume,the Dow-Jones Industrials reached an intra-day high of 714.07 on Friday. Even more significant was the action of our shorter-term breadth inde which, for the first time in a long while, managed to match the action of the averages, be – tering its levels of two weeks ago. If this continues, and longer-term breadth also impro it will be possible to become more optimistic on the immediate outlook. I However, insofar as the industrial sector of the list is concerned, it is not yet possible to let bullish enthusiasm become rampant. The Dowhas just aboutrunout the up side count of the tiny !ase formed in the 692-697 area, and is just under the heavy overhe d supply existing at 715. The most bullish possible pattern would be continued backing and filling at present levels before an attempt-at penetration of this supply is made. Until this happens, it is best to reserve judgment as to the intermediate trend. As has been noted in many places, however, the action of the rails over the past few weeks has been a good bit more encouraging .than.that of,the industrials. As most in- vestors are aware, the Dow-Jones Rails this week bettered their August peak, reaChing a intra-day high of 152.24 on Thursday. While various counts are possible on both the Dow Jones Rail average and the Standard & Poor Rail Index, ability to follow through on this high would indicate a move of at least fairly substantial proportions.– possibly to the 160 180 range on the Dow and to the 45-49 range on the S & P Index. Many investors tend to shy away from rail securities, becoming somewhat confu e by the mystique of ICC accounting and the highly technical jargon about carloadings, main e nance ratios, etc. which usually accompanies most rail attractive at this juncture in comparison with their indust 'a c simple reasons. (('0 1. They are measurably cheaper than h Actually, the rails appe sJ.or a number of ver sis of both earnings and divid,enQ'!. Yiel!s th,e four .S. '. recommen5!ed list — At-, chison, Topeka & Santa Fe, Northern Paci!, boar line and Southern Railway — range from 4.7 to 5.2 on n e appears virtually assured. This compares with a present Wbw-Jones Industrial average. The price earnings ratios for the our s c ten and fifteen times depressed 1960 earn ings, and between si a c yDow Industrials 1 t' 1955-59 earnings. The current PIE ratio for the 2. Contra t the' ression held by many investors, earnings of the better- grade rails have shown e measure of growth. It is quite true that a railroad, by the very nature of its 0 ation, will have its revenues adversely affected by the business 'cyc e However, almost all of the better southern and western roads, including the 'four on our list, have tended to show substantial earnings improvement from cyclical peak to cyclical peak. There is no reason to suspect that this action will not continue. 3. 1962 earnings for the higher quality equities should show marked improveme over both 1960 and 1961 results. Excellent earnings comparisons are already beginning to show up as carloadings and revenues, and, above all, operating earnings, reported each month, show impressive gains over year-ago figures. 4. The above factors apply largely to better-grade rail securities. However, the more speculative equities have an attraction of their own, based largely on the fantastic leverage contained in both their-Capital structure and their operating ratios.For example, Chicago, Milwaukee, St. Paul & Pacific had operating revenues in 1960 of 108 per share'. 'comparable figure for Chicago ,Northwestern was 187. The earnings improvement whic even a small change in profit margins can generate in roads of this type is,of course, tremendous. 5. A final point in favor of the rails must be noted in the huge savings which will occur through mergers now in the preliminary stages. In this connection, it must be emphaSized that the regulatory authorities tend to move at a ponderous 'pace and many merg now being discussed will not be consummated for a number of years. Nonetheless, the mo e toward merger has gained impetus and will continue to do so. For all of the above reasons, in today's uncertain market, the conservatively pri high-quality rail equities deserve representation in every investment portfOlio. vow-Jones Ind. 708.25 ANTHONY W. TABELL D-ftWmJgnfiiPr 1Aumstnnces IS to be construed as, an offer to sell or n solic\ Ion !iuy any secUrl 1(3 -herein The informatiOn contnmed herem IS not guaranteed ns to accuracy or completeness and the furntshtng thereof IS not, and under no clTcumstnnceS IS to be construed us, a repre,entn- han by Walston & Co. Inc. All eltpresslOns of opimon arc subJcct to change Without notice Walston & Co. Inc. and Officers, Directors, Stockholders and Employees thereof, purchase, sell Ilnd may have an Interest In the seeurltJCS mentIOned herem. ThiS market letter JS zntended and presented merely as a gCl!crllJ. ltltormnl commentary on day to nay market news and not as II, complete analYSIS AddltlOnaIlnforrnntlOn With respect to any S('cufltH!9 referred to hereIn Will be ' ' \\N JOt