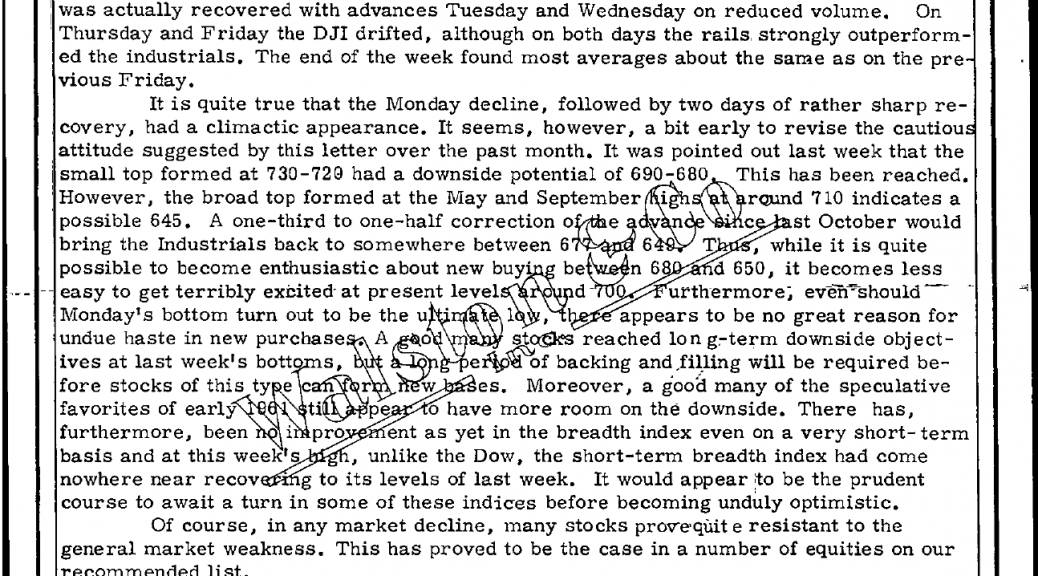 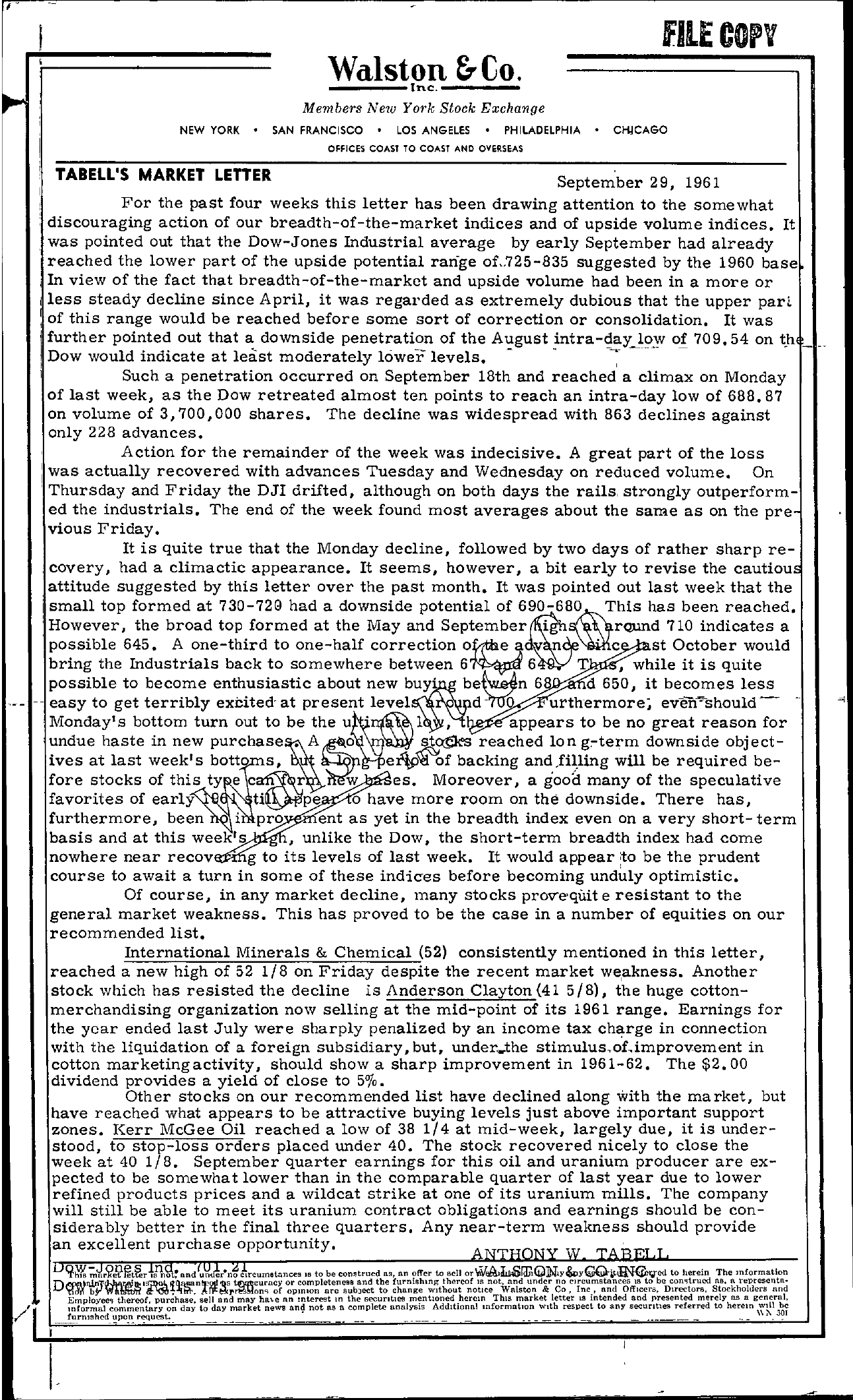 fiLE COpy W- – -a-llsnt ocn. -&– -C-o-. Members New Yo,'k Stock Exchange NEW YORK SAN FRANCISCO lOS ANGELES PHILADELPHIA CHICAGO OFFICES COAST TO COAST AND OVERSEAS TABEll'S MARKET lETTER September 29, 1961 I For the past four weeks this letter has been drawing attention to the somewhat , discouraging action of our breadth-of-the-market indices and of upside volume indices. It I was pointed out that the Dow-Jones Industrial average by early September had already reached the lower part of the upside potential range of..725-835 suggested by the 1960 base I In view of the fact that breadth-of-the-market and upside volume had been in a more or I less steady decline since April, it was regarded as extremely dubious that the upper part Iof this range would be reached before some sort of correction or consolidation. It was further pointed out that a downside penetration of the August intra-day low of 709.54 on th Dow would indicate at least moderately lower levels. – – – – — Such a penetration occurred on September 18th and reached a climax on Monday of last week, as the Dow retreated almost ten points to reach an intra-day low of 688.87 on volume of 3,700,000 shares. The decline was widespread with 863 declines against only 228 advances. Action for the remainder of the week was indecisive. A great part of the loss was actually recovered with advances Tuesday and Wednesday on reduced volume. On , Thursday and Friday the DJI drifted, although on both days the rails, strongly outperform- ed the industrials. The end of the week found most averages about the same as on the previous Friday. It is quite true that the Monday decline, followed by two days of rather sharp re- I covery, had a climactic appearance. It seems, however, a bit early to revise the cautiom attitude suggested by this letter over the past month. It was pOinted out last week that the ! small top formed at 730-7213 had a downside potential of This has been reached. , However, the broad top formed at the May and Septembert;. rQUnd 710 indicates a possible 645. A one-third to one-half correction of'ithe n . c st October would bring the Industrials back to somewhere between 6 T ,while it is quite possible to become enthusiastic about new — easy to get terribly at present level 6 d 650, it becomes less d)ul. urthermore; – Monday's bottom turn out to be the undue haste in new ives at last week's s, m\QJi)) appears to be no great reason for reached Ion g,..term downside objectbacking andJil.ling will be required be- fore stocks of Moreover, a gooa many of the speculative favorites of early-. ,' furthermore, been i'l( \ in\.pro 0 have more room on the downside. There has, ent as yet in the breadth index even on a very short- term basis and at this week's , unlike the Dow, the short-term breadth index had come nowhere near recov g to its levels of last week. It would appear Ito be the prudent course to await a turn in some of these indices before becoming unduly optimistic. Of course, in any market decline, many stocks prove-qUit e resistant to the general market weakness. This has proved to be the case in a number of equities on our recommended list. International Minerals & Chemical (52) consistently mentioned in this letter, reached a new high of 52 1/8 on Friday despite the recent market we,akness. Another stock which has resisted the decline is Anderson Clayton (41 5/8)' the huge cotton- merchandising organization now selling at the mid-point of its 1961 range. Earnings for the year ended last July were sharply penalized by an income tax charge in connection with the liquidation of a foreign subsidiary, but, underthe stimulus,of,improvement in cotton marketing activity, should show a sharp improvement in 1961-62. The 2.00 dividend provides a yield of close to 50/0. Other stocks on our recommended list have declined along with the market, but have reached what appears to be attractive buying levels just above important support zones. Kerr McGee Oil reached a low of 38 1/4 at mid-week, largely due, it is understood, to stop-loss orders placed under 40. The stock recovered nicely to close the week at 40 1/8. September quarter earnings for this oil and uranium producer are expected to be somewhat lower than in the comparable quarter of last year due to lower refined products prices and a wildcat strike at one of its uranium mills. The company will still be able to meet its uranium contract obligations and earnings should be con- siderably better in the final three quarters. Any near-term weakness should provide an excellent purchase opportunity. A 'T'A BELL e'ircumswnces 15 to be construed as, an offer to scJJ to herein The mformatlon D A'rtlrnJ.ifI1ibnlyrJ..h.Etre.ifto Ii or completeness and the furnishmg thlfcof IS not, and under no Circumstances IS to be AB, n represcntll- of opinIOn arc subJect to change without notice Walston & Co, Inc, and Officers, Directors, Stockhohlers lind Employee'! thereof sell and may ha,\c an Interest m the secufllae!! mentIOned herem This market letter IS intended and presented merely as a general, , mformal on da; to day market news and not as a complete analysis Additional mformatlon with respect to any secUrities referred to herem will be