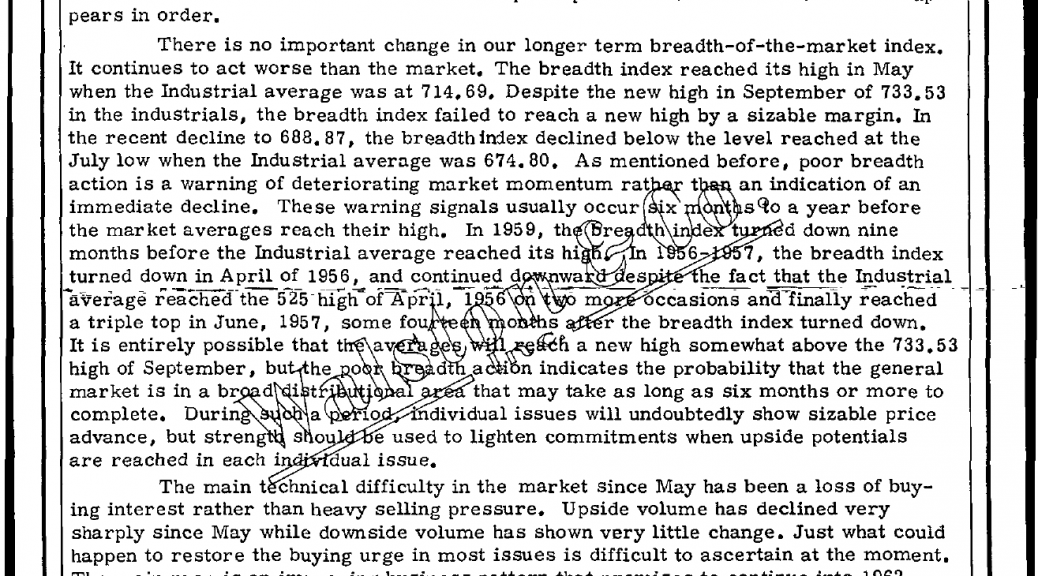 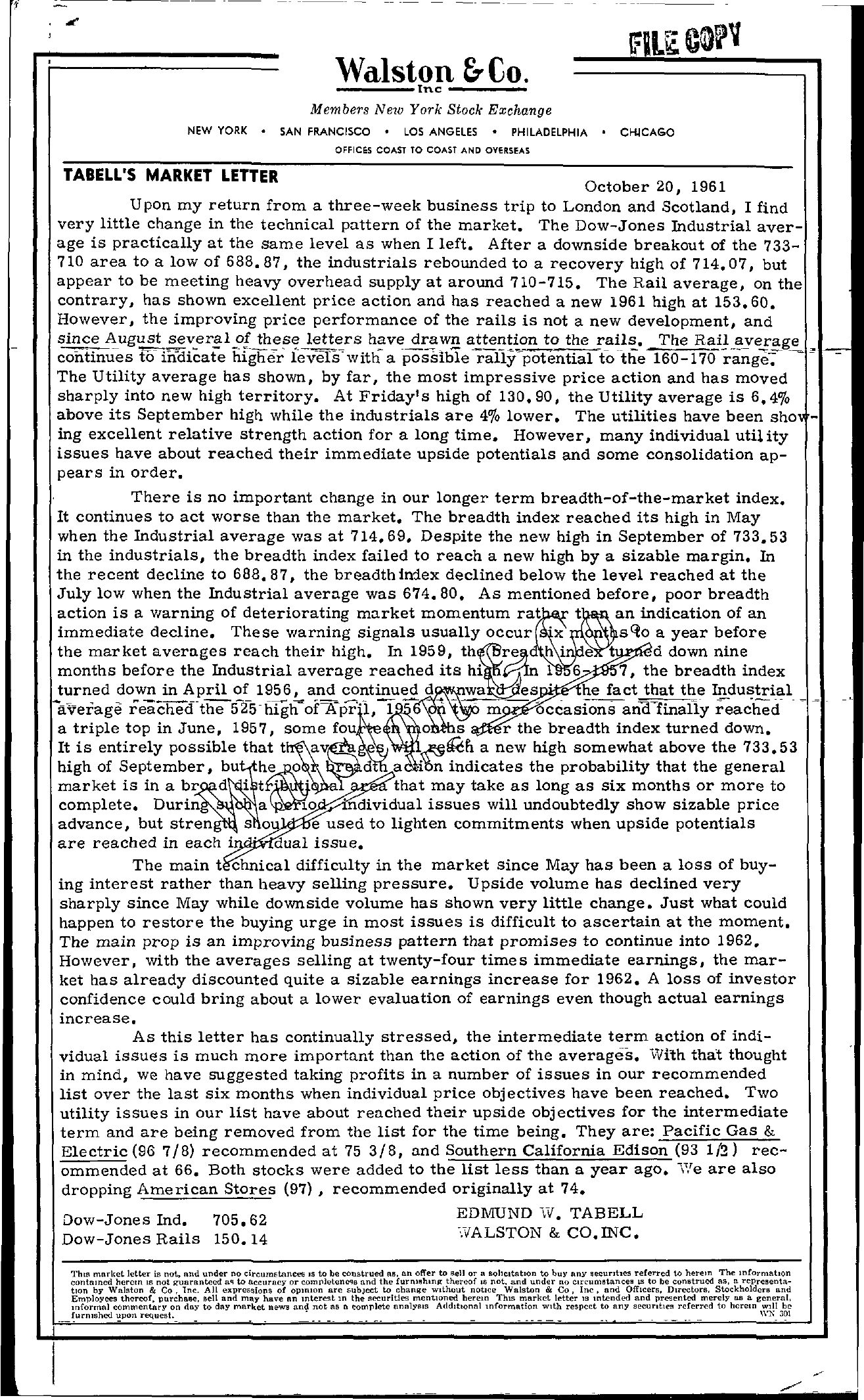 ———- — Walston &- Co. Members New York Stock Exchange NEW YORK SAN FRANCISCO LOS ANGELES PHILADELPHIA OFFICES COAST TO COAST AND OVERSEAS TABELL'S MARKET LETTER October 20, 1961 Upon my return from a three-week business trip to London and Scotland, I find very little change in the technical pattern of the market. The Dow-Jones Industrial aver age is practically at the same level as when I left. After a downside breakout of the 733- 710 area to a low of 688.87, the industrials rebounded to a recovery high of 714.07, but appear to be meeting heavy overhead supply at around 710-715. The Rail average, on contrary, has shown excellent price action and has reached a new 1961 high at 153.60. However, the improving price performance of the rails is not a new development, and since August several of these letters have drawn attention to the rails. The Rail continues to irfdicate iiigher levels w itli- a possihlerally' potential tottle 160-170 range. The Utility average has shown, by far, the most impressive price action and has moved sharply into new high territory. At Friday1s high of 130.90, the Utility average is 6.4 above its September high while the industrials are 4 lower. The utilities have been sho\lH ing excellent relative strength action for a long time. However, many individual utH ity issues have about reached their immediate upside potentials and some consolidation ap- pears in order. There is no important change in our longer term breadth-of-the-market index. It continues to act worse than the market. The breadth index reached its high in May when the Industrial average was at 714.69. Despite the new high in September of 733.53 in the industrials, the breadth index failed to reach a new high by a sizable margin. In the recent decline to 688.87, the breadth in1ex declined below the level reached at the July low when the Industrial average was 674.80. As mentioned before, poor breadth action is a warning of deteriorating market momentum rat t an indication of an immediate decline. These warning signals usually occur x a year before the market averages reach their high. In 1959, h in e t d down nine months before the Industrial average reached its hi V;1n 1 6- 7, the breadth index and average reached the 525 h1gh ofApr 1, 1 a triple top in June, 1957, some fou 0 It is entirely possible that t aVi wa m 0 fact occaSlOns ana fmally reached s r the breadth index turned down. a new high somewhat above the 733.53 market is in a br d itO that may take as long as six months or more to complete. Durin a 10 ndividual issues will undoubtedly show sizable price advance, but streng s 0 e used to lighten commitments when upside potentials are reached in each i aual issue. The main t chnica1 difficulty in the market since May has been a loss of buying interest rather than heavy selling pressure. Upside volume has declined very sharply since May while downside volume has shown very little change. Just what could happen to restore the buying urge in most issues is difficult to ascertain at the moment. The main prop is an improving business pattern that promises to continue into 1962. However, with the averages selling at twenty-four times immediate earnings, the market has already discounted quite a sizable earnings increase for 1962. A loss of investor confidence could bring about a lower evaluation of earnings even though actual earnings increase. As this letter has continually stressed, the intermediate term action of indi- vidual issues is much more important than the action of the averages. With that thought in mind, we have suggested taking profits in a number of issues in our recommended list over the last six months when individual price objectives have been reached. Two utility issues in our list have about reached their upside objectives for the intermediate term and are being removed from the list for the time being. They are Pacific Gas & Electric (96 7/8) recommended at 75 3/8, and Southern California Edison (93 1/3) recommended at 66. Both stocks were added to the list less than a year ago. Y.'e are also dropping American Stores (97) , recommended originally at 74. Dow-Jones Ind. 705.62 Dow-Jones Rails 150. 14 EDlVlUND W. TABELL -oVALSTON & CO. INC. 'I'hls market letter is not, and under no circumstances IS to be construed AS, nn offer to sell or a sohCltation to huy nny securitIes referred to herein The Information contmned herem IS not n'l to Recuraey or completene'lS and the furnlahmg thereof IS not, and under no Circumstances 15 to be construed as, a representa- tIOn by Walston & Co, Inc. Ali expressions of opmlOn arc subJcct to change Without notice Walston & Co, Inc, and Officers, Directors, Stockholders and Employees thereof, purchase, sell and may have an mterest In the securities mentIOned herem Th15 market letter IS mtended and presented merely as a general, mformal commentn.ry on day to day market neWB and not as a complete nnalyslS AdditIonal Information With respect to any secunbes referred to herem wIll be furnished request.' WK 301