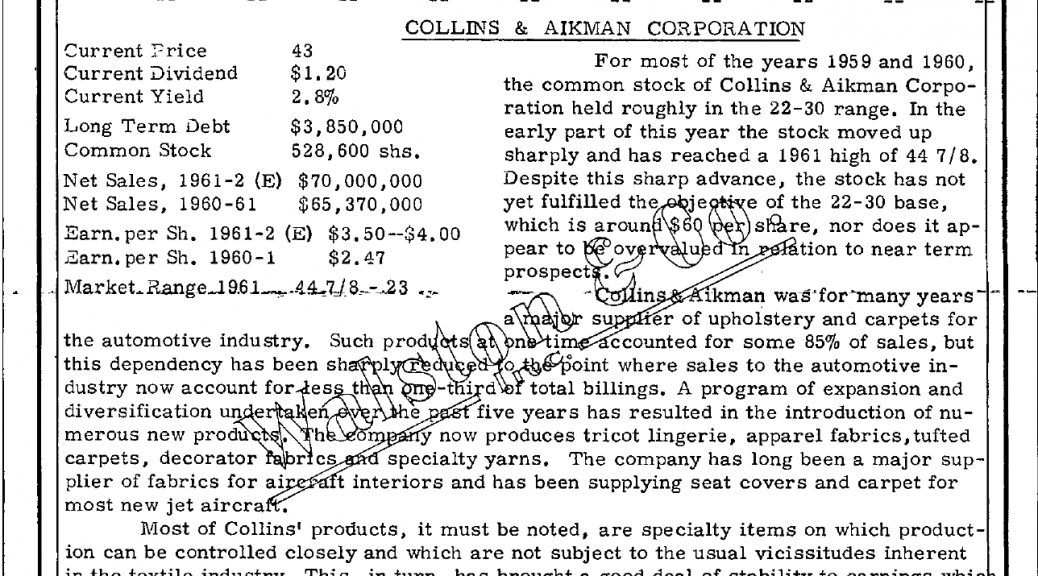 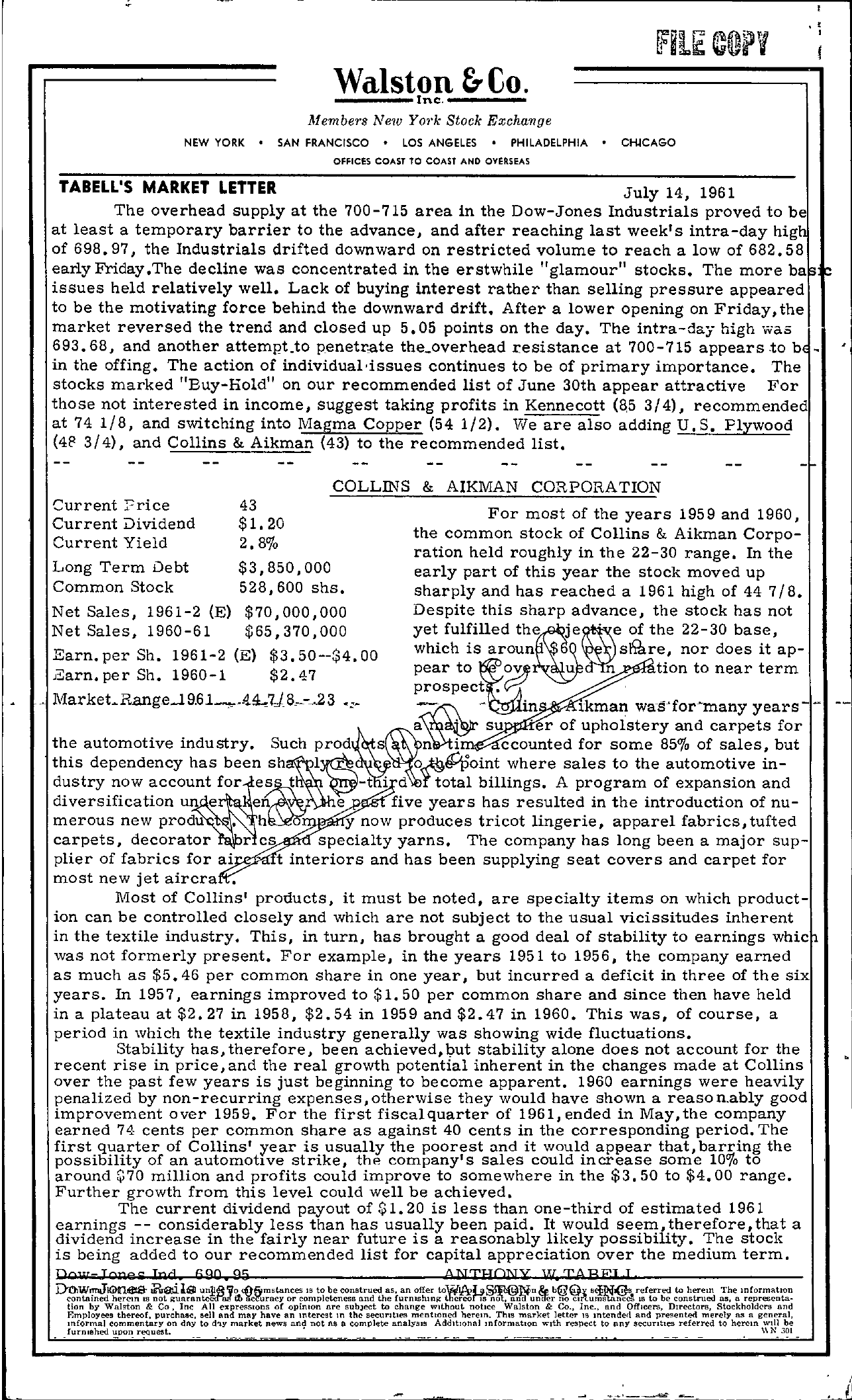 , Walston &- Co. Inc, – – – – Membe,'s New Y01'k Stock Exchange NEW YORK SAN FRANCISCO LOS ANGELES PHILADELPHIA CHICAGO OFFICES COAST 10 COAST AND OVER.SEAS TABELL'S MARKET LETTER July 14, 1961 The overhead supply at the 700 -715 area in the Dow-Jones Industrials proved to be at least a temporary barrier to the advance, and after reaching last week's intra-day hig of 698.97, the Industrials drifted downward on restricted volume to reach a low of 682.58 early Friday.The decline was concentrated in the erstwhileglamour stocks. The more ba issues held relatively well. Lack of buying interest rather than selling pressure appeared to be the motivating force behind the downward drift. After a lower opening on Friday, the market reversed the trend and closed up 5.05 points on the day. The intra-day high wa 693.68, and another attempt.to penetr,ate theoverhead resistance at 700-715 appears.to b in the offing. The action of individual'issues continues to be of primary importance. The stocks marked Buy-Hold on our recommended list of June 30th appear attractive For those not interested in income, suggest taking profits in Kennecott (1\5 3/4), recommended at 741/8, and switching into Magma Copper (54 1/2). We are also adding U.S. Plywood (483/4), and Collins & Aikman (43) to the recommended list. COLLINS & AIKMAN CORPORATION Current i'rice Current Llividend Current Yield Long Term Debt 43 1.20 2. 80/0 3,850,000 For most of the years 1959 and 1960, the common stock of Collins & Aikman Corporation held roughly in the 22-30 range. In the early part of this year the stock moved up Common Stock 528, 600 shs. sharply and has reached a 1961 high of 44 7/8. Net Sales, 1961-2 (E) 70,000,000 Despite this sharp advance, the stock has not Net Sales, 1960-61 65,370,000 yet fulfilled of the 22-30 base, Earn. per Sh. 1961-2 (E) 3.50–4.00 which is aroun sMre, nor does it ap- pe r Sh. 1960 -1 2.47 – MarkeLRange..l9.61A4-..U8–23 '0- pear to prospect P. in un lkman tion to near term years– a . su 'er of upholstery and carpets for the automotive industry. Such i ccounted for some 850/0 of sales, but this dependency has dustry now account for es t where sales to the automotive in- i d ,f total billings. A program of expansion and diversification un e en e five years has resulted in the introduction of nu- merous new produ h o y now produces tricot lingerie, apparel fabrics, tufted carpets, decorator r cs specialty yarns. The company has long been a major sup- plier of fabrics for ai t interiors and has been supplying seat covers and carpet for most new jet aircra . Most of Collins' products, it must be noted, are specialty items on which product- ion can be controlled closely and which are not subject to the usual vicissitudes inherent in the textile industry. This, in turn, has brought a good deal of stability to earnings whic was not formerly present. For example, in the years 1951 to 1956, the company earned as much as 5.46 per common share in one year, but incurred a deficit in three of the six years. In 1957, earnings improved to 1. 50 per common share and since then have held in a plateau at 2.27 in 1958, 2.54 in 1959 and 2.47 in 1960. This was, of course, a period in which the textile industry generally was showing wide fluctuations. Stability has, therefore, been achieved,l;mt stability alone does not account for the recent rise in price, and the real growth potential inherent in the changes made at Collins over the past few years is just beginning to become apparent. 1960 earnings were heavily penalized by non-recurring expenses,otherwise they would have shown a reason,ably good improvement over 1959. For the first fiscal quarter of 1961,ended in May,the company earned 74 cents per common share as against 40 cents in the corresponding period. The first quarter of Collins' year is usually the poorest and it would appear that, barring the possibility of an automotIve strike, the company's sales could increase some 100/0 to around ;;70 million and profits could improve to somewhere in the 3.50 to 4.00 range. Further growth from this level could well be achieved. The current dividend payout of ;;1.20 is less than one-third of estimated 1961 earnings — considerably less than has usually been paid. It would seem, therefore, that a dividend increase in the fairly near future is a reasonably likely possibility. The stock is being added to our recommended list for capital appreciation over the medium term. contnined herln IS not unl!Q'ilo cfiE\lmstances IS to be construed as, an offer bl sf1)Jw(!h referred to herem The mformatlOn tt. c'(uracy or completeness Ilnd the furnlshmg thereoHsrU)l;, ana'un'iter no IS to be construed as, a representa- tion by Walston & Co, Inc All expresSIons of opinion nrc subJect to change Without notice Walston & Co., Inc., and Officers, Directors, Stockholders nnd thereof, purchase, sell and may have an Interest In the securities mentIOned herem. ThIS market letter 18 Intended and presented merely as II general, Informal comment.ury on dny to d'ly market news and not ns a complete anab'sls Additional informatIon With respect to nny securities referred to herem Will be . . \\1'301