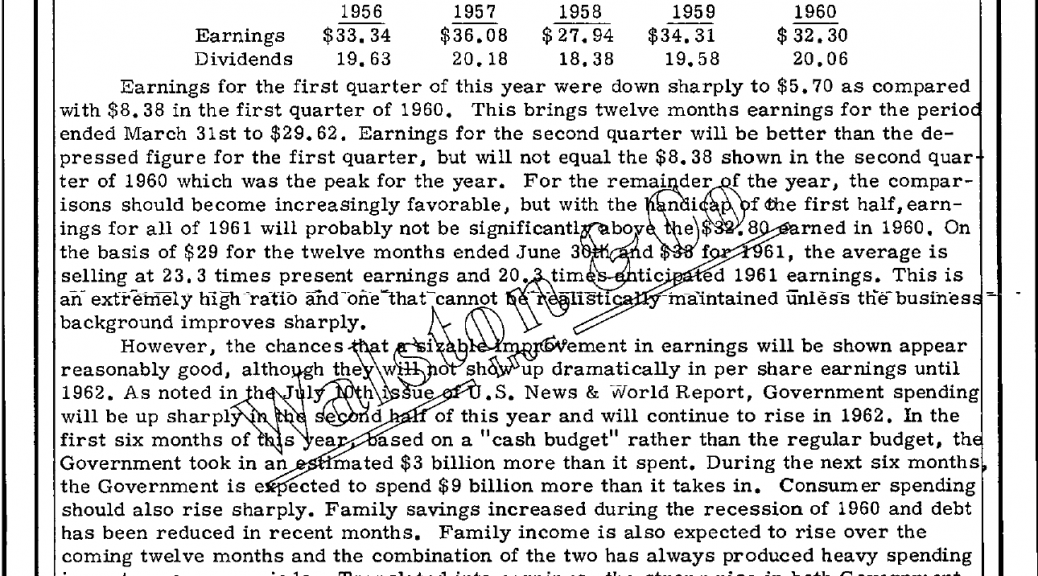 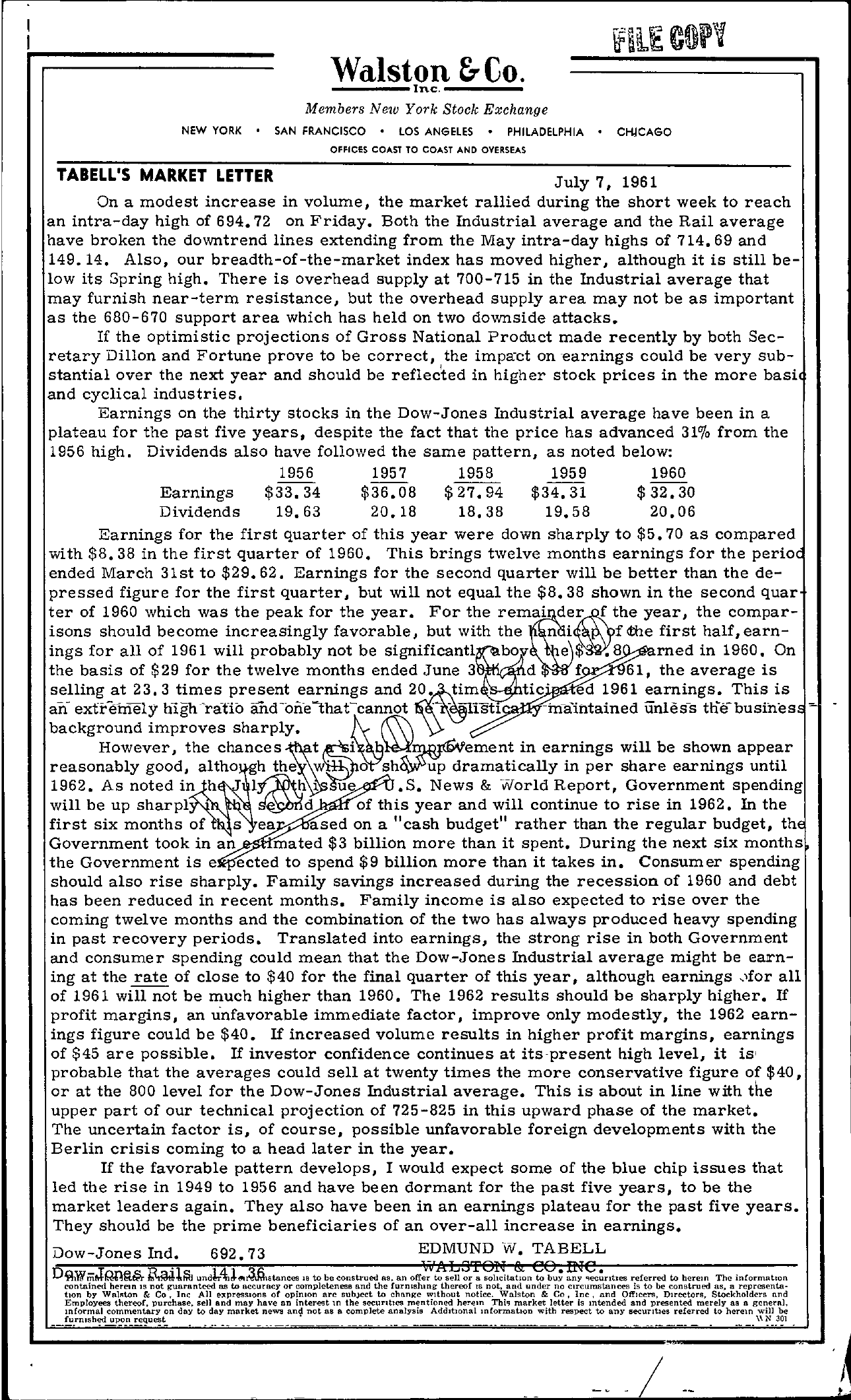 W—-a–l–s-tInocn.–&—-C—o. Members New York Stock Exchange NEW YORK SAN FRANCISCO LOS ANGELES PHILADELPHIA CI-YCAGO OFFICES COAST TO COAST AND OVERSEAS TABELL'S MARKET LETTER July 7, 1961 On a modest increase in volume, the market rallied during the short week to reach an intra-day high of 694.72 on Friday. Both the Industrial average and the Rail average have broken the downtrend lines extending from the May intra-day highs of 714.69 and 149.14. Also, our breadth-of-the-market index has moved higher, although it is still be- low its Spring high. There is overhead supply at 700-715 in the Industrial average that may furnish near-term resistance, but the overhead supply area may not be as important as the 680-670 support area which has held on two downside attacks. If the optimistic projections of Gross National Product made recently by both Sec- retary Dillon and Fortune prove to be correct, the impact on earnings could be very sub- stantial over the next year and should be reflected in higher stock prices in the more basi and cyclical industries. Earnings on the thirty stocks in the Dow-Jones Industrial average have been in a plateau for the past five years, despite the fact that the price has advanced 31 from the 1956 high. Dividends also have followed the same pattern, as noted below -195-6 Earnings 33.34 -195-7 1958 -1959- -1-960 36.08 27.94 34.31 32.30 Dividends 19.63 20.18 18.38 19.58 20.06 Earnings for the first quarter of this year were down sharply to 5.70 as compared with 8.38 in the first quarter of 1960. This brings twelve months earnings for the perio ended March 31st to 29.62. Earnings for the second quarter will be better than the de- pressed figure for the first quarter, but will not equal the 8.38 shown in the second quar ter of 1960 which was the peak for the year. For the demfthe year, the compar- isons should become increasingly favorable, but with the n i f the first half, earn- ings for all of 1961 will probably not be e 8 rned in 1960. On the basis of 29 for the twelve months ended June 3 and Yn an extremely hlgh-ratlO and one that cannot ailiStl background improves sharply. r\\\ df 61, the average is tic .ed 961 is -mamtamed unless Hie busmes However, the chances t i ement in earnings will be shown appear 1962. As noted in h 1 ue .S. News & -world Report, Government spending will be up sharpl of this year and will continue to rise in 1962. In the first six months of s ea ased on a cash budget rather than the regular budget, th Government took in an mated 3 billion more than it spent. During the next six months the Government is e ected to spend 9 billion more than it takes in. Consumer spending should also rise sharply. Family savings increased during the recession of 1960 and debt has been reduced in recent months. Family income is also expected to rise over the coming twelve months and the combination of the two has always produced heavy spending in past recovery periods. Translated into earnings, the strong rise in both Government and consumer spending could mean that the Dow-Jones Industrial average might be earn- ing at the rate of close to 40 for the final quarter of this year, although earnings -for all of 1961 will not be much higher than 1960. The 1962 results should be sharply higher. If profit margins, an unfavorable immediate factor, improve only modestly, the 1962 earn- ings figure could be 40. If increased volume results in higher profit margins, earnings of 45 are possible. If investor confidence continues at its present high level, it is, probable that the averages could sell at twenty times the more conservative figure of 40, or at the 800 level for the Dow-Jones Industrial average. This is about in line with the upper part of our technical projection of 725-825 in this upward phase of the market. The uncertain factor is, of course, possible unfavorable foreign developments with the Berlin crisis coming to a head later in the year. If the favorable pattern develops, I would expect some of the blue chip issues that led the rise in 1949 to 1956 and have been dormant for the past five years, to be the market leaders again. They also have been in an earnings plateau for the past five years. They should be the prime beneficiaries of an over-all increase in earnings. Dow-Jones Ind. 692.73 EDMUND W. TABELL DT 1 A 1 .,,, Vi'trLS'f'ON Ilt CO. mMOO. IS to be eonstrued as, an offer to sell or a sohcitatlOn to buy any '1ecurthes referred to herem The information contained herem IS nol guaranteed as to accuracy or completeness and the furnishIng thereof IS not, and under no circumstances is to be construed as, a representa- tIOn by WnlRton & Co. Inc All e,;presslons or opinion arc subject to chQnge Without notice. Walston & Co, Inc, and Officers, Directors, Stockholders and Employees thereof, purchase, sell and may have nn interest In the secuntles mentioned herem market letter is mtended and presented merely as a genernl. Informal commentary on aay to day market news and not as 0. complete analysis Additional information with respect to any securities referred to herem will be . . . . . . . , .. . . . . . .