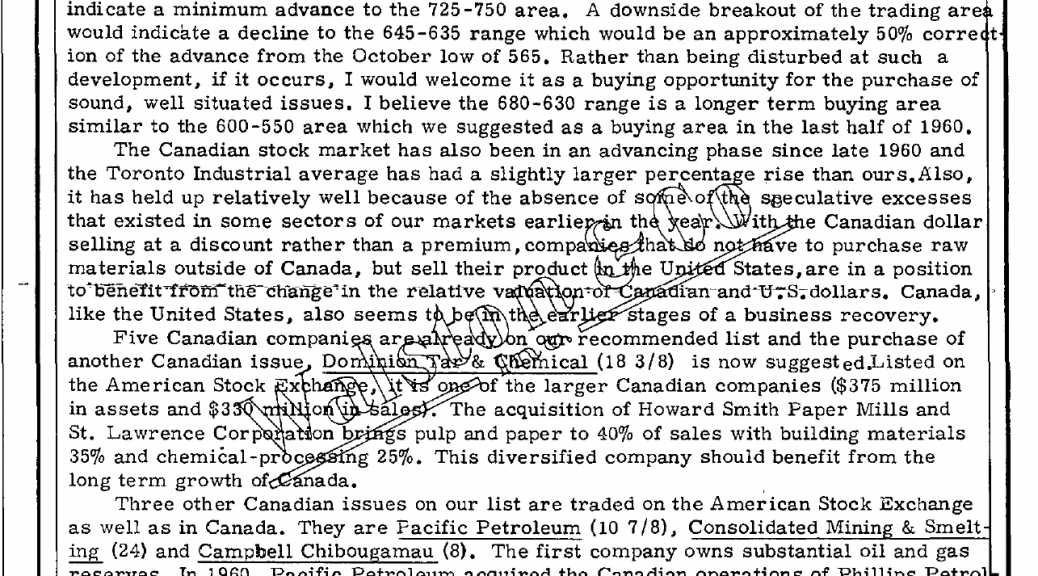 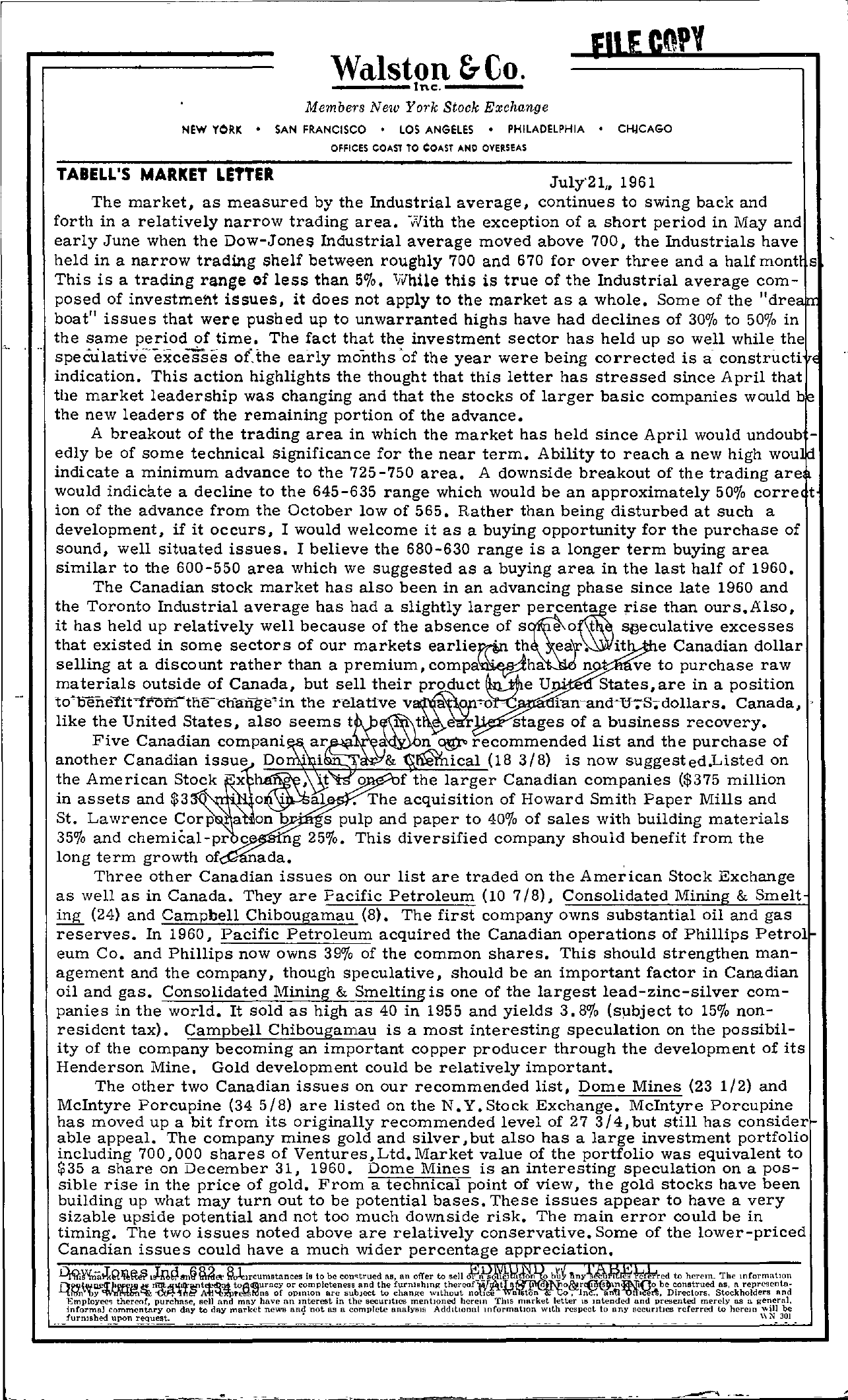 WalstIoncn. &Co . NEW YORK Members New York Stock Exchange SAN FRANCISCO LOS ANGELES PHILADELPHIA CHJCAGO OFFICES COAST 10 COAST ANti OVERSEAS TABELL'S MARKET LETTER July'21 1961 The market, as measured by the Industrial average, continues to swing back and forth in a relatively narrow trading area. -,'lith the exception of a short period in May and early June when the Dow-Jone! Industrial average moved above 700, the Industrials have held in a narrow trading shelf between roughly 700 and 670 for over three and a half mont s This is a trading range of less than 50/0. ',iThile this is true of the Industrial average com- posed of investmel'lt issues, it does not apply to the market as a whole. Some of the dre boat issues that were pushed up to unwarranted highs have had declines of 30 to 500/0 in the same period of time. The fact that the investment sector has held up so well while the speCUlative-excesses ofihe early months 'of the year were being corrected is a constructi indication. This action highlights the thought that this letter has stressed since April that the market leadership was changing and that the stocks of larger basic companies would the new leaders of the remaining portion of the advance. A breakout of the trading area in which the market has held since April would undoub edly be of some technical significance for the near term. Ability to reach a new high wou indicate a minimum advance to the 725 -750 area. A downside breakout of the trading are would indicate a decline to the 645-635 range which would be an approximately 50 corre t ion of the advance from the October low of 565. Rather than being disturbed at such a development, if it occurs, I would welcome it as a buying opportunity for the purchase of sound, well situated issues. I believe the 680-630 range is a longer term buying area similar to the 600-550 area which we suggested as a buying area in the last half of 1960. The Canadian stock market has also been in an advancing phase since late 1960 and the Toronto Industrial average has had a slightly larger e rise than ours.Also, it has held up relatively well because of the absence of t excesses that existed in some sectors of our markets tr ea. it e Canadian dollar selling at a discount rather than a premium, n ve to purchase raw materials outside of Canada, but sell their product Iin'ifue U ' States, are in a position the relative Canada, – like the United States, also seems t Five Canadian compani ar another Canadian issue Do . i stages of a business recovery. a\M.bn C\!O recommended list and the purchase of & (18 3/8) is now suggested.Listed on the American in assets and 3 . 't 0 f the larger Canadian companies (375 million . The acquisition of Howard Smith Paper Mills and St. Lawrence a on b s pulp and paper to 400/0 of sales with building materials 35 and chemical-pr c ng 25. This diversified company should benefit from the long term growth of ada. Three other Canadian issues on our list are traded on the American Stock Exchange as well as in Canada. They are Facific Petroleum (10 7/8), Consolidated Millin & Smelt ing (24) and Campbell Chibougamau (8). The first company owns substantial oil and gas reserves. In 1960, Pacific Petroleum acquired the Canadian operations of Phillips Petrol eum Co. and Phillips now owns 39 of the common shares. This should strengthen man- agement and the company, though speculative, should be an important factor in Canadian oil and gas. Consolidated Mining & Smelting is one of the largest lead-zinc-silver com- panies in the world. It sold as high as 40 in 1955 and yields 3.8 (subject to 15 non- resident tax). Campbell Chibougamau is a most interesting speculation on the possibil- ity of the company becoming an important copper producer through the development of its Henderson Mine. Gold development could be relatively important. The other two Canadian issues on our recommended list, Dome Mines (23 1/2) and McIntyre Porcupine (34 5/8) are listed on the N. Y. Stock Exchange. McIntyre Porcupine has moved up a bit from its originally recommended level of 27 3/4,but still has consider able appeal. The company mines gold and silver, but also has a large investment portfolio including 700,000 shares of Ventures,Ltd.Market value of the portfolio was equivalent to 35 a share on December 31, 1960. Dome Mines is an interesting speculation on a pos- sible rise in the price of gold. From a technical point of view, the gold stocks have been building up what may turn out to be potential bases. These issues appear to have a very sizable upside potential and not too much downside risk. The main error could be in timing. The two issues noted above are relatively conservative. Some of the lower-priced Canadian issues could have a much wider percentage appreciation. RB, 0 0 UIis to be con;trued an offer to sell f\ so lel on bt tny c c erred to herem. The mCormatlOn toel;QUrDcy or completeness and the furnlshlnJl thercofiiT!A.tJ a o&rdii\(sbmJa\li(lo be construed as, n representn .1…..fi'lfn -ctP.-ihe of opinion nrc subJect to chanJle Without noHCe W'a ston' ,1n'k' Directors, Stockholders and thereof. purchase, sell and may have an Interest in the SecUrltlCS mentIOned herem ThiS market letter IS mtended and presented merely as a general. informal commentary on dny to dny mnrket news and not as a complete anah'sIS AddltJonnlInformatlon With respect to any seCUrIties referred to herem ,ill be \\N 301